In this paper, we introduce and study the incomplete version of the intermodal terminal location problem. It's a generalization of the classical version by relaxing the assumption that the induced graph by located terminals is complete. We propose a mixed integer program to model the problem and we provide several extensions. All models are tested through validation in CPLEX solver. Numerical results are reported using well-known data set from the literature. 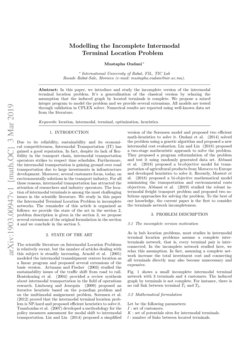 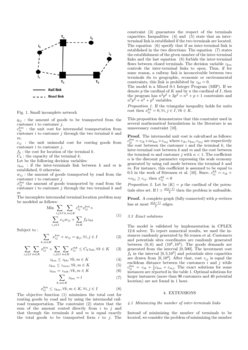 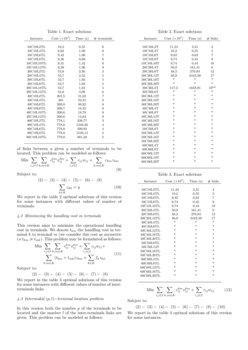 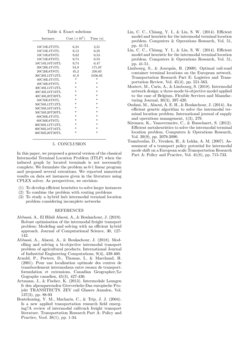 2 State of the art

The scientific literature on Intermodal Location Problems is relatively recent, but the number of articles dealing with this subject is steadily increasing. Arnold et al. (2001)

modeled the intermodal transshipment centers location as a linear program and proposed several extensions of the basic version.

Artmann and Fischer (2003) studied the sustainability issues of the traffic shift from road to rail. Bontekoning et al. (2004) provided a review synthesis about intermodal transportation in the field of operations research. Limbourg and Jourquin (2009) proposed an iterative heuristic based on the p-median problem and on the multimodal assignement problem. Sorensen et al. (2012) proved that the intermodal terminal location problem is NP-hard and proposed efficient heuristics to solve it. Tsamboulas et al. (2007) developed a methodology for the policy measures assessment for modal shift to intermodal transportation. Lin and Lin (2014) proposed a simplified version of the Sorensen model and proposed two efficient math-heuristics to solve it. Oudani et al. (2014)

Lin and Lin (2018) proposed a two-stage matheuristic approach to solve the problem. They proposed a program reformulation of the problem and test it using randomly generated data set. Abbassi et al. (2018) proposed a bi-objective model for transportation of agricultural products from Morocco to Europe and developed heuristics to solve it. Recently, Mostert et al. (2018) proposed a bi-objective mathematical model minimizing the transportation and environmental costs objectives. Abbassi et al. (2019) studied the robust intermodal freight transport problem and proposed two solutions approaches for solving the problem. To the best of our knowledge, the current paper is the first to consider the terminals network incompleteness.

As in hub location problems, most studies in intermodal terminal location problems assume a complete inter-terminals network, that is, every terminal pair is interconnected. In the incomplete network studied here, we relax this assumption. In fact, assuming a complete network increase the total investment cost and connecting all terminals directly may also become unnecessary and expensive.

Fig. 1 shows a small incomplete intermodal terminal network with 3 terminals and 4 customers. The induced graph by terminals is not complete. For instance, there is no rail link between terminal T1 and T3.

The objective function (1) minimizes the total cost for routing goods by road and by using the intermodal rail-road transportation. The constraint (2) states that the sum of the amount routed directly from i to j and that through the terminals k and m is equal exactly the total goods to be transported form i to j. The constraint (3) guarantees the respect of the terminals capacities. Inequalities  (4) and  (5) state that an inter-terminal link is established if the two terminals are located. The equation  (6) specify that if an inter-terminal link is established in the two directions. The equation  (7) states the establishment of the given number of the inter-terminal links and the last equation  (8) forbids the inter-terminal flows between closed terminals. The decision variable zkm controls the inter-terminal links to open. Thus, if for some reason, a railway link is inconceivable between two terminals du to geographic, economic or environmental constraints, this link is prohibited by zkl=0. The model is a Mixed 0-1 Integer Program (MIP). If we denote p the cardinal of K and by n the cardinal of I, then the program has n2p2+3p2+n2+p+1 constraints and n2p2+n2+p2 variables.

If the triangular inequality holds for units cost then xkkij=0,∀i,j∈I,∀k∈K. This proposition demonstrates that this constraint used in several mathematical formulations in the literature is an unnecessary constraint [10]. The intermodal unit cost is calcultaed as follows: ckmij=cik+αckm+cmj where cik,ckm,cmj are respectively the cost between the customer i and the terminal k, the inter-terminal cost between k and m and the cost between the terminal m and customer j with α<1. The coefficient α is the discount parameter expressing the scale economy generated by using rail mode between the terminal k and m. For instance, this coefficient is assumed to be equal to 0.5 in the work of Sörensen et al. [10]. Since, ckkij=cik++ckj≥cij, then xkkij=0 Let be |K|=p the cardinal of the potentials sites set. If l>p(p−1)2 then the problem is unfeasible. A complete graph (fully connected) with p vertices has at most p(p−1)2 edges.

The model is validated by implementation in CPLEX 12.6 solver. To report numerical results, we used the instances randomly generated by Sö rensen et al. Customers and potentials sites coordinates are randomly generated between (0,0) and (104,104). The goods demands are generated from the interval [0,500]. The investment cost fk in the interval [0,5.105] and potentials sites capacities are drawn from [0,104]. After that, cost cij is equal the euclidean distance between the customers i and j while ckmij=cik+12ckm+cmj. The exact solutions for some instances are reported in the table 1. Optimal solutions for larger instances (more than 90 customers and 40 potential location) are not found in 1 hour.

4.1 Minimizing the number of inter-terminals links

We report in the table 2 optimal solutions of this version for some instances with different values of number of terminals.

4.2 Minimizing the handling cost in terminals

We report in the table 3 optimal solutions of this version for some instances with different values of number of inter-terminals links.

In this version both the number p of the terminals to be located and the number l of the inter-terminals links are given. This problem can be modeled as follows:

We report in the table 4 optimal solutions of this version for some instances.

In this paper, we proposed a general version of the classical Intermodal Terminal Location Problem (ITLP) when the induced graph by located terminals is not necessarily complete. We formulate the problem as 0-1 linear program and proposed several extentions. We reported numerical results on data set instances given in the literature using CPLEX solver. As perspectives, we envision: