We propose a novel class of network models for temporal dyadic interaction data. Our goal is to capture a number of important features often observed in social interactions: sparsity, degree heterogeneity, community structure and reciprocity. We propose a family of models based on self-exciting Hawkes point processes in which events depend on the history of the process. The key component is the conditional intensity function of the Hawkes Process, which captures the fact that interactions may arise as a response to past interactions (reciprocity), or due to shared interests between individuals (community structure). In order to capture the sparsity and degree heterogeneity, the base (non time dependent) part of the intensity function builds on compound random measures following Todeschini et al. (2016). We conduct experiments on a variety of real-world temporal interaction data and show that the proposed model outperforms many competing approaches for link prediction, and leads to interpretable parameters. 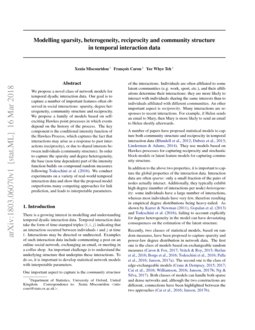 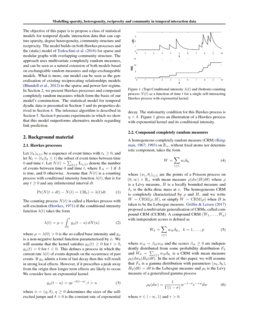 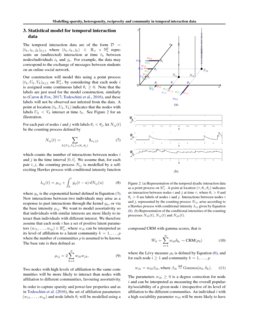 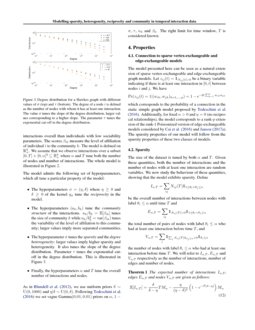 As the availability and importance of temporal interaction data–such as ...
Elahe Ghalebi, et al. ∙

There is a growing interest in modelling and understanding temporal dyadic interaction data. Temporal interaction data take the form of time-stamped triples (t,i,j) indicating that an interaction occurred between individuals i and j at time t. Interactions may be directed or undirected. Examples of such interaction data include commenting a post on an online social network, exchanging an email, or meeting in a coffee shop. An important challenge is to understand the underlying structure that underpins these interactions. To do so, it is important to develop statistical network models with interpretable parameters, that capture the properties which are observed in real social interaction data.

One important aspect to capture is the community structure of the interactions. Individuals are often affiliated to some latent communities (e.g. work, sport, etc.), and their affiliations determine their interactions: they are more likely to interact with individuals sharing the same interests than to individuals affiliated with different communities. An other important aspect is reciprocity. Many events are responses to recent events of the opposite direction. For example, if Helen sends an email to Mary, then Mary is more likely to send an email to Helen shortly afterwards. A number of papers have proposed statistical models to capture both community structure and reciprocity in temporal interaction data (Blundell et al., 2012; Dubois et al., 2013; Linderman and Adams, 2014). They use models based on Hawkes processes for capturing reciprocity and stochastic block-models or latent feature models for capturing community structure.

In addition to the above two properties, it is important to capture the global properties of the interaction data. Interaction data are often sparse: only a small fraction of the pairs of nodes actually interact. Additionally, they typically exhibit high degree (number of interactions per node) heterogeneity: some individuals have a large number of interactions, whereas most individuals have very few, therefore resulting in empirical degree distributions being heavy-tailed. As shown by Karrer and Newman (2011), Gopalan et al. (2013) and Todeschini et al. (2016)

, failing to account explicitly for degree heterogeneity in the model can have devastating consequences on the estimation of the latent structure.

The objective of this paper is to propose a class of statistical models for temporal dyadic interaction data that can capture all the desired properties mentioned above, which are often found in real world interactions. These are sparsity, degree heterogeneity, community structure and reciprocity. Combining all the properties in a single model is non trivial and there is no such construction to our knowledge. The proposed model generalises existing reciprocating relationships models (Blundell et al., 2012) to the sparse and power-law regime. Our model can also be seen as a natural extension of the classes of models based on exchangeable random measures and edge-exchangeable models and it shares properties of both families. The approach is shown to outperform alternative models for link prediction on a variety of temporal network datasets.

The construction is based on Hawkes processes and the (static) model of Todeschini et al. (2016) for sparse and modular graphs with overlapping community structure. In Section 2, we present Hawkes processes and compound completely random measures which form the basis of our model’s construction. The statistical model for temporal dyadic data is presented in Section 3 and its properties derived in Section 4. The inference algorithm is described in Section 5. Section 6 presents experiments on four real-world temporal interaction datasets.

Let (tk)k≥1 be a sequence of event times with tk≥0, and let Ht=(tk|tk≤t) the subset of event times between time 0 and time t. Let N(t)=∑k≥11tk≤t denote the number of events between time 0 and time t, where 1A=1 if A is true, and 0 otherwise. Assume that N(t) is a counting process with conditional intensity function λ(t), that is for any t≥0 and any infinitesimal interval dt

Consider another counting process ~N(t) with the corresponding (~tk)k≥1,~Ht,~λ(t). Then, N(t),~N(t) are mutually-exciting Hawkes processes  (Hawkes, 1971) if the conditional intensity functions λ(t) and ~λ(t) take the form

where μ=λ(0)>0,~μ=~λ(0)>0 are the base intensities and gϕ,g~ϕ non-negative kernels parameterised by ϕ and ~ϕ. This defines a pair of processes in which the current rate of events of each process depends on the occurrence of past events of the opposite process.

Assume that μ=~μ,ϕ=~ϕ and gϕ(t)≥0 for t>0, gϕ(t)=0 for t<0. If gϕ admits a form of fast decay then this results in strong local effects. However, if it prescribes a peak away from the origin then longer term effects are likely to occur. We consider here an exponential kernel

where ϕ=(η,δ). η≥0 determines the sizes of the self-excited jumps and δ>0 is the constant rate of exponential decay. The stationarity condition for the processes is η<δ. Figure 1 gives an illustration of two mutually-exciting Hawkes processes with exponential kernel and their conditional intensities.

where (wi,θi)i≥1 are the points of a Poisson process on (0,∞)×R+ with mean measure ρ(dw)H(dθ) where ρ is a Lévy measure, H is a locally bounded measure and δx is the dirac delta mass at x. The homogeneous CRM is completely characterized by ρ and H, and we write W∼CRM(ρ,H), or simply W∼CRM(ρ) when H is taken to be the Lebesgue measure. Griffin and Leisen (2017) proposed a multivariate generalisation of CRMs, called compound CRM (CCRM). A compound CRM (W1,…,Wp) with independent scores is defined as

are independently distributed from some probability distribution

is a gamma distribution with parameters

(ak,bk), H0(dθ)=dθ is the Lebesgue measure and ρ0 is the Lévy measure of a generalized gamma process

Consider temporal interaction data of the form D=(tk,ik,jk)k≥1 where (tk,ik,jk)∈R+×N2∗ represents a directed interaction at time tk from node/individual ik to node/individual jk. For example, the data may correspond to the exchange of messages between students on an online social network.

We use a point process (tk,Uk,Vk)k≥1 on R3+, and consider that each node i is assigned some continuous label θi≥0. the labels are only used for the model construction, similarly to (Caron and Fox, 2017; Todeschini et al., 2016), and are not observed nor inferred from the data. A point at location (tk,Uk,Vk) indicates that there is a directed interaction between the nodes Uk and Vk at time tk. See Figure 2 for an illustration.

For a pair of nodes i and j, with labels θi and θj, let Nij(t) be the counting process

for the number of interactions between i and j in the time interval [0,t]. For each pair i,j, the counting processes Nij,Nji are mutually-exciting Hawkes processes with conditional intensities

where gϕ is the exponential kernel defined in Equation (2). Interactions from individual i to individual j may arise as a response to past interactions from j to i through the kernel gϕ, or via the base intensity μij. We also model assortativity so that individuals with similar interests are more likely to interact than individuals with different interests. For this, assume that each node i has a set of positive latent parameters (wi1,…,wip)∈Rp+, where wik is the level of its affiliation to each latent community k=1,…,p. The number of communities p is assumed known. We model the base rate

In order to capture sparsity and power-law properties and as in Todeschini et al. (2016), the set of affiliation parameters (wi1,…,wip) and node labels θi is modelled via a compound CRM with gamma scores, that is W0=∑∞i=1wi0δθi∼CRM(ρ0) where the Lévy measure ρ0 is defined by Equation (5), and for each node i≥1 and community k=1,…,p

The parameter wi0≥0 is a degree correction for node i and can be interpreted as measuring the overall popularity/sociability of a given node i irrespective of its level of affiliation to the different communities. An individual i with a high sociability parameter wi0 will be more likely to have interactions overall than individuals with low sociability parameters. The scores βik tune the level of affiliation of individual i to the community k. The model is defined on R3+. We assume that we observe interactions over a subset [0,T]×[0,α]2⊆R3+ where α and T tune both the number of nodes and number of interactions. The whole model is illustrated in Figure 2.

The model is a natural extension of sparse vertex-exchangeable and edge-exchangeable graph models. Let zij(t)=1Nij(t)+Nji(t)>0

[0,t] between nodes i and j in either direction. We assume

which corresponds to the probability of a connection in the static simple graph model proposed by Todeschini et al. (2016). Additionally, for fixed α>0 and η=0 (no reciprocal relationships), the model corresponds to a rank-p extension of the rank-1 Poissonized version of edge-exchangeable models considered by Cai et al. (2016) and Janson (2017a). The sparsity properties of our model follow from the sparsity properties of these two classes of models.

We provide in the supplementary material a theorem for the exact expectations of Iα,T, Eα,T Vα,T. Now consider the asymptotic behaviour of the expectations of Vα,T, Eα,T and Iα,T , as α and T go to infinity.111 We use the following asymptotic notations. Xα=O(Yα) if limXα/Yα<∞, Xα=ω(Yα) if limYα/Xα=0 and Xα=Θ(Yα) if both Xα=O(Yα) and Yα=O(Xα). Consider fixed T>0 and α that tends to infinity. Then,

Assume a set of observed interactions D=(tk,ik,jk)k≥1 between V individuals over a period of time T. The objective is to approximate the posterior distribution π(ϕ,ξ|D) where ϕ are the kernel parameters and ξ=((wik)i=1,…,<span class