Isogeometric analysis (IGA) is used to simulate a permanent magnet synchronous machine. IGA uses non-uniform rational B-splines to parametrise the domain and to approximate the solution space, thus allowing for the exact description of the geometries even on the coarsest level of mesh refinement. Given the properties of the isogeometric basis functions, this choice guarantees a higher accuracy than the classical finite element method. For dealing with the different stator and rotor topologies, the domain is split into two non-overlapping parts on which Maxwell's equations are solved independently in the context of a classical Dirichlet-to-Neumann domain decomposition scheme. The results show good agreement with the ones obtained by the classical finite element approach. 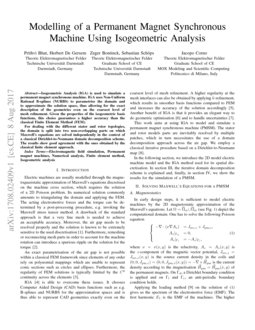 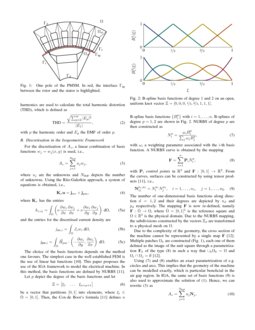 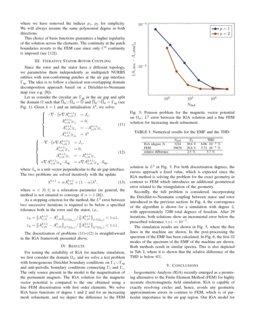 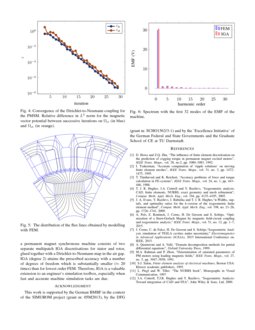 Electric machines are usually modelled through the magnetoquasistatic approximation of Maxwell’s equations discretised on the machine cross section, which requires the solution of a 2D Poisson problem. Its numerical solution commonly amounts to triangulating the domain and applying the *fem. The acting electromotive forces and the torque can be determined by a post-processing procedure, e.g. invoking the Maxwell stress tensor method. A drawback of the standard approach is that a very fine mesh is needed to achieve an acceptable accuracy. Moreover, the air gap needs to be resolved properly and the solution is known to be extremely sensitive to the used discretisation

[1]. Furthermore, remeshing or reconnecting mesh parts in order to account for the machine rotation can introduce a spurious ripple on the solution for the torque [2].

An exact parametrisation of the air gap is not possible within a classical *fem framework since elements of any order rely on polynomial mappings which are unable to represent conic sections such as circles and ellipses. Furthermore, the regularity of *fem solutions is typically limited by the C0 continuity across the elements [3].

*iga [4] is able to overcome these issues. It chooses *cad basis functions such as e.g. B-splines and *nurbs for the approximation spaces and is thus able to represent *cad geometries exactly even on the coarsest level of mesh refinement. A higher regularity at the mesh interfaces can also be obtained by applying k-refinement, which results in smoother basis functions compared to *fem and increases the accuracy of the solution accordingly [5]. Another benefit of IGA is that it provides an elegant way to do geometric optimisation [6] and to handle uncertainties [7].

This work aims at using *iga to model and simulate a *pmsm. The stator and rotor models parts are inevitably resolved by multiple patches, which in turn necessitates the use of a domain decomposition approach across the air gap. We employ a classical iterative procedure based on a Dirichlet-to-Neumann map [8].

In the following section, we introduce the 2D model electric machine model and the *iga method used for its spatial discretisation. In section III, the iterative domain decomposition scheme is explained and, finally, in section IV, we show the results for the simulation of a *pmsm.

In early design steps, it is sufficient to model electric machines by the 2D magnetostatic approximation of the Maxwell’s equations. Let Ω=¯¯¯¯Ωrt∪¯¯¯¯Ωst (see Fig. 1) depict the computational domain. One has to solve the following Poisson equation

-component of the magnetic vector potential,

Applying the loading method [9] on the solution of (1) gives us the spectrum of the *emf. The first harmonic E1 is the *emf of the machines. The higher harmonics are used to calculate the *thd, which is defined as

with p the harmonic order and Ep the *emf of order p.

Ii-B Discretisation in the Isogeometric Framework

For the discretisation of Az, a linear combination of basis functions wj=wj(x,y) is used, i.e.,

where uj are the unknowns and NDoF depicts the number of unknowns. Using the Ritz-Galerkin approach, a system of equations is obtained, i.e.,

where Kν has the entries

Let p depict the degree of the basis functions and let

with ωi a weighting parameter associated with the i-th basis function. A *nurbs curve is obtained by the mapping

The number of one-dimensional basis functions along direction d=1,2 and their degrees are depicted by nd and pd respectively. The mapping F is now re-defined, namely F:^Ω→Ω, where ^Ω=[0,1]2 is the reference square and Ω∈R3 is the physical domain. Due to the *nurbs mapping, the subdivisions constructed by the vectors Ξd are transformed to a physical mesh on Ω.

Due to the complexity of the geometry, the cross section of the machine cannot be represented by a single map F [12]. Multiple patches Ωk are constructed (Fig. 1), each one of them defined as the image of the unit square through a parametrization Fk of the type (8) in such a way that ∪kΩk=Ω and Ωi∩Ωj=∅ [12].

Using (7) and (8) enables an exact parametrization of e.g. circles and arcs. This implies that the geometry of the machine can be modelled exactly, which is particular beneficial in the air gap region. In *iga, the same set of basis functions (9) is also used to approximate the solution of (1). Hence, we can rewrite (3) as

where we have removed the indices p1, p2 for simplicity. We will always assume the same polynomial degree in both directions.

This choice of basis functions guarantees a higher regularity of the solution across the elements. The continuity at the patch boundaries reverts to the *fem case since only C0 continuity is imposed (see [12]).

Since the rotor and the stator have a different topology, we parametrise them independently as multipatch *nurbs entities with non-conforming patches at the air gap interface Γag. The idea is to follow a classical non-overlapping domain decomposition approach based on a Dirichlet-to-Neumann map (see e.g. [8]).

where →nst is a unit vector perpendicular to the air gap interface. The two problems are solved iteratively with the update

As a stopping criterion for the method, the L2 error between two successive iterations is required to be below a specified tolerance both in the rotor and the stator, i.e.,

The discretisation of problems (11)-(12) is straightforward in the *iga framework presented above.

For testing the suitability of *iga for machine simulation, we first consider the domain Ωrt and we solve a test problem with homogeneous Dirichlet boundary conditions on Γd∪Γag and anti-periodic boundary conditions connecting Γl and Γr. The only source present in the model is the magnetisation of the permanent magnets. The *iga solution for the magnetic vector potential is compared to the one obtained using a fine *fem discretisation with first order elements. We solve *iga basis functions of degree 1 and 2 and for an increasing mesh refinement, and we depict the difference to the *fem solution in L2 in Fig. 3. For both discretisation degrees, the curves approach a fixed value, which is expected since the *iga method is solving the problem for the exact geometry in contrast to *fem which introduces an additional geometrical error related to the triangulation of the geometry.

Secondly, the full problem is considered, incorporating the Dirichlet-to-Neumann coupling between stator and rotor introduced in the previous section. In Fig. 4, the convergence of the algorithm is shown for a simulation with degree 2

, with approximately 3200 total degrees of freedom. After 29 iterations, both solutions show an incremental error below the prescribed tolerance

The simulation results are shown in Fig. 5, where the flux lines in the machine are shown. In the post-processing the spectrum of the *emf has been calculated. In Fig. 6, the first 32 modes of the spectrum of the *emf of the machine are shown. Both methods result in similar spectra. This is also depicted in Tab. I, where it is shown that the relative difference of the *thd is below 6%.

Isogeometric Analysis (IGA) recently emerged as a promising alternative to the Finite Element Method (FEM) for highly accurate electromagnetic field simulation. IGA is capable of exactly resolving circles and, hence, avoids any geometric approximations errors in contrast to FEM, which is of particular importance in the air gap region. Our IGA model for a permanent magnet synchronous machine consists of two separate multipatch IGA discretisations for stator and rotor, glued together with a Dirichlet-to-Neumann map in the air gap. IGA (degree 2) attains the prescribed accuracy with a number of degrees of freedom which is substantially smaller (≈ 20 times) than for lowest order FEM. Therefore, IGA is a valuable extension to an engineer’s simulation toolbox, especially when fast and accurate machine simulation tasks are due.

This work is supported by the German BMBF in the context of the SIMUROM project (grant nr. 05M2013), by the DFG (grant nr. SCHO1562/3-1) and by the ’Excellence Initiative’ of the German Federal and State Governments and the Graduate School of CE at TU Darmstadt.