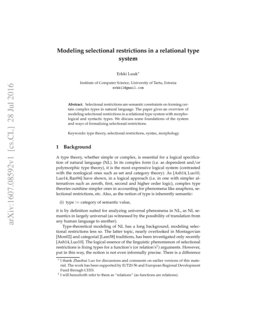 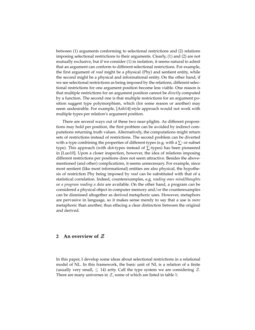 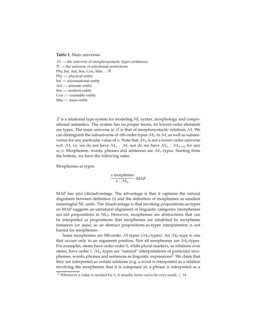 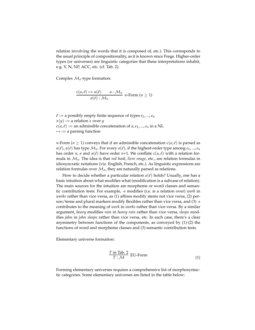 A type theory, whether simple or complex, is essential for a logical specification of natural language (NL). In its complex form (i.e. as dependent and/or polymorphic type theory), it is the most expressive logical system (contrasted with the nonlogical ones such as set and category theory). As [Ash14, Luo10, Luo14, Ran94] have shown, in a logical approach (i.e. in one with simpler alternatives such as zeroth, first, second and higher order logic), complex type theories outshine simpler ones in accounting for phenomena like anaphora, selectional restrictions, etc. Also, as the notion of type is inherently semantic:

it is by definition suited for analyzing universal phenomena in NL, as NL semantics in largely universal (as witnessed by the possibility of translation from any human language to another).

There are several ways out of these two near-plights. As different propositions may hold per position, the first problem can be avoided by indirect computations returning truth values. Alternatively, the computations might return sets of restrictions instead of restrictions. The second problem can be diverted with a type combining the properties of different types (e.g. with a ∑- or subset type). This approach (with dot-types instead of ∑-types) has been pioneered in [Luo10]. Upon a closer inspection, however, the idea of relations imposing different restrictions per positions does not seem attractive. Besides the abovementioned (and other) complications, it seems unnecessary. For example, since most sentient (like most informational) entities are also physical, the hypothesis of restriction Phy being imposed by read can be substituted with that of a statistical correlation. Indeed, counterexamples, e.g. reading ones mind/thoughts or a program reading a data are available. On the other hand, a program can be considered a physical object in computer memory and/or the counterexamples can be dismissed altogether as derived metaphoric uses. However, metaphors are pervasive in language, so it makes sense merely to say that a use is more metaphoric than another, thus effacing a clear distinction between the original and derived.

2 An overview of Z

In this paper, I develop some ideas about selectional restrictions in a relational model of NL. In this framework, the basic unit of NL is a relation of a finite (usually very small, ≤14) arity. Call the type system we are considering Z. There are many universes in Z, some of which are listed in table 1:

Z is a relational type system for modeling NL syntax, morphology and compositional semantics. The system has no proper terms, its lowest-order elements are types. The main universe in Z is that of morphosyntactic relations M. We can distinguish the subuniverse of nth-order types Mn in M, as well as subuniverses for any particular value of n. Note that Mn is not a lower-order universe wrt. M, i.e. we do not have Mn:M, nor do we have Mn:Mn+m for any m,n. Morphemes, words, phrases and sentences are Mn-types. Starting from the bottom, we have the following rules.

Some morphemes are 0th-order M-types (M0-types). An M0-type is one that occurs only in an argument position. Not all morphemes are M0-types. For examples, stems have order order 0, while plural markers, as relations over stems, have order 1. Mn-types are “natural” interpretations of particular morphemes, words, phrases and sentences as linguistic expressions222Whenever a value is needed for n, it usually turns out to be very small, ≤14.. We claim that they are interpreted as certain relations (e.g. a word is interpreted as a relation involving the morphemes that it is composed of, a phrase is interpreted as a relation involving the words that it is composed of, etc.). This corresponds to the usual principle of compositionality, as it is known since Frege. Higher-order types (or universes) are linguistic categories that these interpretations inhabit, e.g. V, N, NP, ACC, etc. (cf. Tab. 2).

n-Form (n≥1) conveys that if an admissible concatenation c(a,¯e) is parsed as a(¯e), a(¯e) has type Mn. For every a(¯e), if the highest-order type among e1,...,en has order n, a and a(¯e) have order n+1. We conflate c(a,¯e) with a relation formula in Mn. The idea is that red book, livre rouge, etc., are relation formulas in idiosyncratic notations (viz. English, French, etc.). As linguistic expressions are relation formulas over Mn, they are naturally parsed as relations.

ar1,...(b1,...) should be read “a imposing selectional restriction r1 on its argument b1 (and possibly more restrictions on other arguments)”. As all terms are types in Z, (b1,...) is an n-indexed sequence of arbitrary types (with b1 the first argument and B a universe it belongs to). A is a universe of relations, B a universe of its arguments. Thus it would not make sense to consider A a relation over B in A(B,...). The latter is a notation for a more complex type, which can be formalized in different ways (e.g. as a ∑- or ∏-type). The following examples may be useful for a better understanding of the rules:

We can compute selectional restrictions directly with a partial function

and reason about them with predicates

An important theorem about selectional restrictions is