Modeling Drug Combinations based on Molecular Structures and Biological Targets 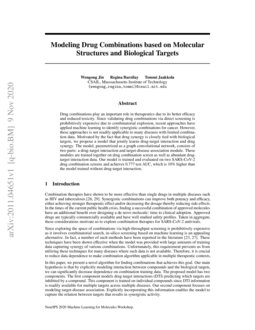 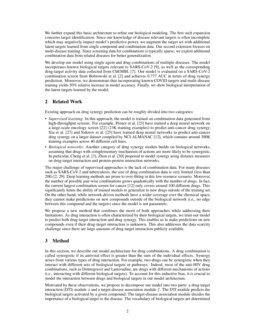 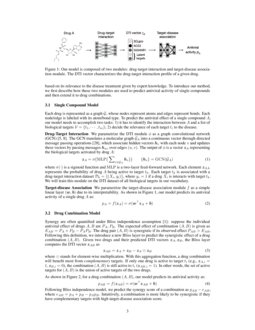 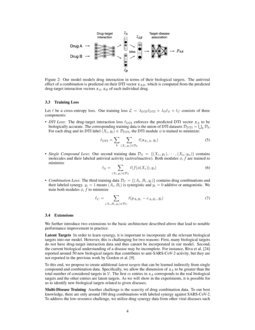 Combination therapies have shown to be more effective than single drugs in multiple diseases such as HIV and tuberculosis (Tan et al., 2012; Yilancioglu and Cokol, 2019). Synergistic combinations can improve both potency and efficacy, either achieving stronger therapeutic effect and/or decreasing the dosage thereby reducing side-effects. In the times of the current public health crisis, finding a successful combination of approved molecules have an additional benefit over designing a de-novo molecule: time to clinical adoption. Approved drugs are typically commercially available and have well studied safety profiles. Taken in aggregate, these considerations motivate us to explore combination therapies for SARS-CoV-2 antivirals.

Since exploring the space of combinations via high-throughput screening is prohibitively expensive as it involves combinatorial search, in-silico screening based on machine learning is an appealing alternative. In fact, a number of such methods have been reported in the literature Preuer et al. (2018); Xia et al. (2018). These techniques have been shown effective when the model was provided with large amounts of training data capturing synergy of various combinations. Unfortunately, this requirement prevents us from utilizing these techniques for many diseases where such data is not available. Therefore, it is crucial to reduce data dependence to make combination algorithm applicable in multiple therapeutic contexts.

In this paper, we present a novel algorithm for finding combinations that achieves this goal. Our main hypothesis is that by explicitly modeling interaction between compounds and the biological targets, we can significantly decrease dependence on combination training data. The proposed model has two components. The first component models drug-target interactions (DTI) predicting which targets are inhibited by a compound. This component is trained on individual compounds since DTI information is readily available for multiple targets across multiple diseases. Our second component focuses on modeling target-disease association. Explicitly incorporating this information enables the model to capture the relation between targets that results in synergistic activity.

We further expand this basic architecture to refine our biological modeling. The first such expansion concerns target identification. Since our knowledge of disease relevant targets is often incomplete which may negatively impact model’s predictive power, we augment the target set with additional latent targets learned from single compound and combination data. Our second extension focuses on multi-disease training. Since screening data for combinations is typically sparse, we exploit additional combination data from related diseases for better generalization.

Existing approach on drug synergy prediction can be roughly divided into two categories:

The major challenge of supervised approaches is the lack of combination data. For many diseases such as SARS-CoV-2 and tuberculosis, the size of drug combination data is very limited (less than 200) Bobrowski et al. (2020); Yilancioglu and Cokol (2019)

. Deep learning methods are prone to over-fitting in this low-resource scenario. Moreover, the number of possible pair-wise combinations grows quadratically with the number of drugs. In fact, the current largest combination screen for cancer

Holbeck et al. (2017) only covers around 100 different drugs. This significantly limits the ability of trained models to generalize to new drugs outside of the training set. On the other hand, while network-driven methods have a wider coverage over the chemical space, they cannot make predictions on new compounds outside of the biological network (i.e., no edge between this compound and the targets) since the model is not parametric.

Motivated by these observations, we propose to decompose our model into two parts: a drug-target interaction (DTI) module ϕ and a target-disease association module f. The DTI module predicts the biological targets activated by a given compound. The target-disease association module decides the importance of a biological target to the disease. The vocabulary of biological targets are determined based on its relevance to the disease treatment given by expert knowledge. To introduce our method, we first describe how these two modules are used to predict antiviral activity of single compounds and then extend it to drug combinations.

Each drug is represented as a graph G, whose nodes represent atoms and edges represent bonds. Each node/edge is labeled with its atom/bond type. To predict the antiviral effect of a single compound A, our model needs to accomplish two tasks: 1) it has to identify the interaction between A and a list of biological targets V={t1,⋯,tm}; 2) decide the relevance of each target ti to the disease.

into a continuous vector through directed message passing operations

Yang et al. (2019), which associate hidden vectors hv with each node v and updates these vectors by passing messages huv over edges (u,v). The output of ϕ is a vector zA representing the biological targets activated by drug A:

is a sigmoid function and

MLP is a two-layer feed-forward network. Each element zA,k

represents the probability of drug

A being active to target tk. Each target tk is associated with a drug-target interaction dataset Dk={(Xi,yi)}, where yi=1 if a drug Xi is interacts with target tk. We will train this module on the DTI dataset of all biological targets in our vocabulary.

Target-disease Association We parametrize the target-disease association module f as a simple linear layer (w,b) due to its interpretability. As shown in Figure 1, our model predicts its antiviral activity of a single drug A as:

Synergy are often quantified under Bliss independence assumption Bliss (1939): suppose the individual antiviral effect of drugs A,B are PA,PB. The expected effect of combination (A,B) is given as EAB=PA+PB−PAPB. The drug pair (A,B) is synergistic if its observed effect PAB>EAB. Following this definition, we introduce a new Bliss layer to predict the synergistic effect of a drug combination (A,B). Given two drugs and their predicted DTI vectors zA,zB, the Bliss layer computes the DTI vector zAB as

As shown in Figure 2, for a drug combination (A,B), our model predicts its antiviral activity as:

Following Bliss independence model, we predict the synergy score of a combination as pAB−eAB, where eAB=pA+pB−pApB. Intuitively, a combination is more likely to be synergistic if they have complementary targets with high target-disease association score.

We further introduce two extensions to the basic architecture described above that lead to notable performance improvement in practice:

To this end, we propose to create additional latent targets that can be learned indirectly from single compound and combination data. Specifically, we allow the dimension of zA to be greater than the total number of considered targets in V. The first m entries in zA corresponds to the real biological targets and the other entries are latent targets. As we will show in the experiments, it is possible for us to identify new biological targets related to given diseases.

Multi-Disease Training Another challenge is the scarcity of drug combination data. To our best knowledge, there are only around 180 drug combinations with labeled synergy against SARS-CoV-2. To address the low-resource challenge, we utilize drug synergy data from other viral diseases such as HIV. In particular, we augment our model with additional HIV biological targets as well as HIV single-drug and drug combination data. The HIV related datasets will be elaborated in Section 4.

The DTI module ϕ now outputs a DTI vector zdA for each disease d. ϕ is shared across two diseases and trained to learn drug-target interaction for all diseases. Since each disease operates on different targets, we create a target-disease association module fD for each disease. Let ℓdDTI,ℓdS,ℓdC be the losses for each disease d∈{SARS-CoV-2, HIV} computed from its own dataset. Our multi-disease training loss becomes

The above drug-target interaction data contains around 20K compounds in total. Our training data for SARS-CoV-2 utilizes another two assays:

HIV Data The training data for HIV comes from the following assays:

, we adopt default hyperparameters from

Yang et al. (2019), with hidden dimension 300 and three message passing iterations. We set the dimension of DTI vector |z|=100, with 42 real biological targets (SARS-CoV-2 and HIV) and 58 latent targets, so that the number of real and latent targets are roughly equal. We set λ1=10,λ2=0.1 for our final model.

To show the effectiveness of different components, we compare with the following baselines:

Our results are shown in Figure 3. As expected, the GCN baseline performs poorly, with 0.537±0.075 AUC. Adding drug-target interaction data (+DTI) improves the AUC to 0.658±0.079. Adding HIV data (+MultiD) improves the AUC to 0.706±0.088. Our final model, trained with both HIV and drug-target interaction (+All), achieves the best AUC of 0.777±0.066. This validates the advantage of adding drug-target interaction data and multi-disease training. Note that if we remove the latent targets (+All,-latent), the performance decreases to 0.718±0.021. This also shows the importance of using latent targets to complement missing biological information.

While the latent targets are trained to represent biological targets, we found that they are predictive of certain SARS-CoV-2 biological targets that are not provided during training. Therefore, we propose to interpret their biological meaning by the following procedure:

The target set C contains 34 biological targets reported in Riva et al. (2020) that are correlated with SARS-CoV-2 antiviral activity and have drug-target interaction data in the ChEMBL database. These targets are not provided to the model during training. As shown in Figure 3, among the 58 latent targets, 27 of them are matched to the antiviral targets in Riva et al. (2020) using the above procedure. This shows that our model is capable of capturing additional SARS-CoV-2 targets through single-agent and combination data.

In this paper, we present a new algorithm for predicting SARS-CoV-2 drug synergy. The model consists of two components: a drug-target interaction module and target-disease association module. Our method requires much less combination data since we explicitly model the drug-target interaction in our model architecture. The proposed method is general and applicable to many other diseases.