Modeling Document Interactions for Learning to Rank with Regularized Self-Attention

Learning to rank is an important task that has been successfully deployed in many real-world information retrieval systems. Most existing methods compute relevance judgments of documents independently, without holistically considering the entire set of competing documents. In this paper, we explore modeling documents interactions with self-attention based neural networks. Although self-attention networks have achieved state-of-the-art results in many NLP tasks, we find empirically that self-attention provides little benefit over baseline neural learning to rank architecture. To improve the learning of self-attention weights, We propose simple yet effective regularization terms designed to model interactions between documents. Evaluations on publicly available Learning to Rank (LETOR) datasets show that training self-attention network with our proposed regularization terms can significantly outperform existing learning to rank methods. 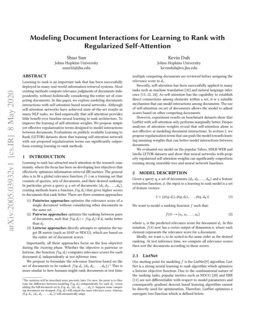 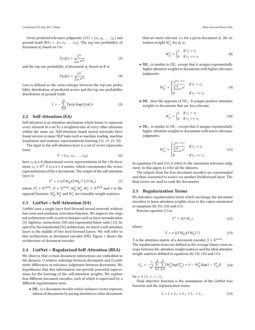 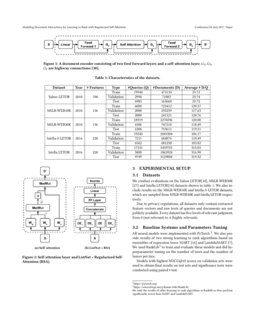 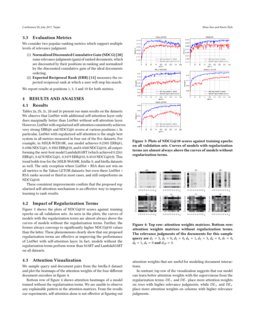 Towards self-attention based visual navigation in the real world

Context-Aware Learning to Rank with Self-Attention

In learning to rank, one is interested in optimising the global ordering...
Przemysław Pobrotyn, et al. ∙

In this work, we propose a novel self-attention based neural network for...
Pierre-Amaury Grumiaux, et al. ∙

Learning to rank has attracted much attention in the research community, where the focus has been on developing loss objectives that effectively optimizes information retrieval (IR) metrics. The general idea is to fit a global relevance function f(⋅) on a training set that consists of queries, sets of documents, and their desired rankings. In particular, given a query q, a set of documents {d1,d2,…,dn}, existing methods learn a function f(q,di) that gives higher scores to documents that rank better. There are three common approaches:

Importantly, all these approaches focus on the loss objective during the training phase. Whether the objective is pairwise or listwise, the function f(q,di) computes relevance scores for each document di independently at test inference time.

However, experiment results on benchmark datasets show that ListNet with self-attention only performs marginally better. Deeper analyses of attention weights reveal that self-attention alone is not effective at modeling document interactions. In section 2, we propose regularization terms that can push the model towards learning meaning weights that can better model interactions between documents.

and a feature extraction function,

, the input to a learning to rank model is a set of feature vectors:

We want to model a ranking function f such that:

Ideally, we want si to be sorted in the same order as the desired ranking. At test inference time, we compute all relevance scores then sort the documents according to these scores.

Our starting point for modeling f is the ListNet(Cao et al., 2007) algorithm. ListNet is a strong neural learning to rank algorithm which optimizes a listwise objective function. Due to the combinatorial nature of the ranking tasks, popular metrics such as NDCG (Järvelin and Kekäläinen, 2002) and ERR (Chapelle et al., 2009)

are not differentiable with respect to model parameters and consequently gradient descent based learning algorithm cannot be directly used for optimization. Therefore, ListNet optimizes a surrogate loss function which is defined below:

. The top one probability of document

dj based on f is:

and the top one probability of document dj based on R is:

Self-attention is an attention mechanism which learns to represent every element in a set by a weighted sum of every other elements within the same set. Self-attention based neural networks have found success in many NLP tasks such as machine reading, machine translation and sentence representations learning (Lin et al., 2017; Vaswani et al., 2017; Cheng et al., 2016; Devlin et al., 2018).

The input to the self-attention layer is a set of vector representations:

We observe that certain document interactions are embedded in the datasets: 1) relative orderings between documents and 2) arithmetic differences in relevance judgments between documents. We hypothesize that this information can provide powerful supervisions for the learning of the self-attention weights. We explore four different document encoders, each of which is supervised by a different regularization term:

In equations (9) and (11), k refers to the maximum relevance judgment. In this paper, k=4 for all the datasets.

The outputs from the four document encoders are concatenated and then converted to scores via another feedforward layer. The final scores are used to rank the documents.

We introduce regularization terms which encourage the document encoders to learn attention weights close to the values mentioned in equations (8), (9), (10) and (11):

Final objective function is the summation of the ListNet loss function and the regularization terms:

Due to privacy regulations, all datasets only contain extracted feature vectors and raw texts of queries and documents are not publicly available. Every dataset has five levels of relevant judgment, from 0 (not relevant) to 4 (highly relevant).

All neural models were implemented with PyTorch

222https://pytorch.org/. We also provide results of two strong learning to rank algorithms based on ensembles of regression trees: MART (Friedman, 2002) and LambdaMART (Burges, 2010). We used RankLib333https://sourceforge.net/p/lemur/wiki/RankLib/ We omit the results of other learning to rank algorithms in Ranklib as they perform significantly worse than MART and LambdaMART.

Tables 2(a), 2(b), 2(c), 2(d) and 2(e) present our main results on the datasets. We observe that ListNet with additional self-attention layer only does marginally better than ListNet without self-attention layer. However, ListNet with regularized self-attention consistently achieves very strong ERR@i and NDCG@i scores at various positions i. In particular, ListNet with regularized self-attention is the single best system in all metrics measured in four out of the five datasets. For example, in MSLR-WEB10K, our model achieves 0.2305 ERR@1, 0.4386 NDCG@1, 0.3502 ERR@10, and 0.4568 NDCG@10, all outperforming the next-best model LambdaMART (which achieved 0.2261 ERR@1, 0.4278 NDCG@1, 0.3479 ERR@10, 0.4510 NDCG@10). This trend holds true for the MSLR-Web30K, Istella-S, and Istella datasets as well. The only exception where ListNet + RSA does not win on all metrics is the Yahoo LETOR datasets: but even there ListNet + RSA ranks second or third in most cases, and still outperforms on NDCG@10.

These consistent improvements confirm that the proposed regularized self-attention mechanism is an effective way to improve learning to rank results.

We sample query and document pairs from the Istella-S dataset and plot the heatmaps of the attention weights of the four different document encoders in figure 4.

Bottom row of figure 4 shows attention heatmaps of a model trained without the regularization terms. We are unable to observe any explainable pattern in the attention matrices. From the results our experiments, self-attention alone is not effective at figuring out attention weights that are useful for modeling document interactions.

4.4. Impact of the document encoders

We train four separate models, each of which uses only one of the four document encoders. Figure 5 presents our results.

There are two general research directions in learning to rank. In the traditional setting, machine learning algorithms are employed to re-rank documents based on preprocessed feature vectors. In the end-to-end setting, models are designed to extract features and rank documents simultaneously.

As there can be tens of millions of candidate documents for every query in real-world contexts, information retrieval systems usually employ a two-phase approach. In the first phase, a smaller set of candidate documents are shortlisted from the bigger pool of documents using simpler models such as vector space model (Salton et al., 1975) and BM25 (Robertson et al., 2009). In the second phase, shortlisted documents are converted into feature vectors and more accurate learning to rank models are used to re-rank the feature vectors. Examples of commonly used features are term frequencies, BM25 scores, URL click rate and length of documents.

Predicting the relevance scores of documents in pointwise approaches can be treated as a regression problem. Popular regression algorithms such as (Breiman, 2001; Friedman, 2002)

are often directly used to estimate relevance judgments of documents. Pairwise approaches such as

are also effective. The common theme in these papers is to learn a classifier which can determine the correct ordering given a pair of documents.

Optimizing listwise objectives can be difficult. This is because popular IR metrics such as MAP, ERR and NDCG are not differentiable, which means gradient descent based methods cannot be directly used for optimization. Various surrogate loss functions have been proposed over the years. For example, (Cao et al., 2007) proposed ListNet, which uses the cross entropy between the permutation probability distributions of the predicted ranking and the ground truth as loss function. (Taylor et al., 2008) proposed SoftRank, which uses smoothed approximations to ranking metrics. (Burges, 2010) proposed LambdaRank and LambdaMART, which approximate gradients by the directions of swapping two documents, scaled by change in ranking metrics. Although these loss functions demonstrate various degree of success on learning to rank tasks, most of the papers only use them to train global ranking models which predict relevance scores of every document independently. In contrast, our model is designed specifically to model the interdependence between documents. Our ListNet loss function can also be replaced with any of the above existing loss objectives.

As traditional learning to rank systems rely heavily on handcrafted feature engineering that can be tedious and often incomplete, there is growing interest in end-to-end learning to rank tasks among both NLP and IR researchers. Systems in this category focus on generating feature vectors automatically using deep neural networks, without the need for feature vectors extraction.

Since the aforementioned models focus primarily on learning better vector representations of query-document pairs from raw texts, the output representations from those models can be directly fed as inputs to our model, which is designed to learn the interactions among the documents. As end-to-end learning to rank is not the focus of this paper, we will explore end-to-end models in future work.

This paper explores the possibility of modeling document interactions with self-attention mechanism. We show that a self-attentional neural network with properly regularized attention weights can outperform state-of-the-art learning to rank algorithms on publicly available benchmark datasets.

We believe that different interpolation weights in the regularization terms of the loss function in Equation 18 may affect performance; we will explore this in future work. Another line of future work is to combine the idea of self-attention proposed here to the various end-to-end deep learning ranking models proposed in the literature.