Efficient modeling on uncertain information plays an important role in estimating the risk of contaminant intrusion in water distribution networks. Dempster-Shafer evidence theory is one of the most commonly used methods. However, the Dempster-Shafer evidence theory has some hypotheses including the exclusive property of the elements in the frame of discernment, which may not be consistent with the real world. In this paper, based on a more effective representation of uncertainty, called D numbers, a new method that allows the elements in the frame of discernment to be non-exclusive is proposed. To demonstrate the efficiency of the proposed method, we apply it to the water distribution networks to estimate the risk of contaminant intrusion. 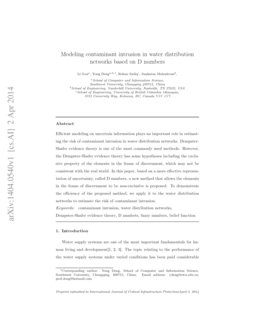 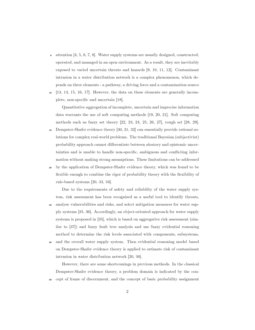 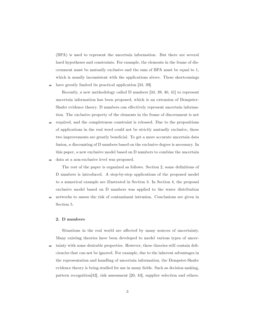 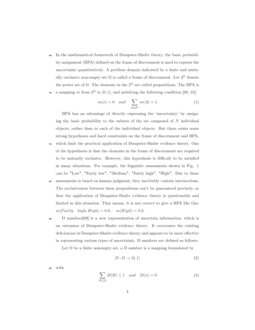 Water supply systems are one of the most important fundamentals for human living and developmentsargaonkar2013model ; nyende2013application ; vairavamoorthy2007modelling . The topic relating to the performance of the water supply systems under varied conditions has been paid considerable attention preis2008multiobjective ; tamminen2008water ; perelman2009extreme ; islam2013evaluating ; el2004fuzzy . Water supply systems are usually designed, constructed, operated, and managed in an open environment. As a result, they are inevitably exposed to varied uncertain threats and hazards walski2003advanced ; islam2013evaluation ; xin2012hazard ; khanal2006distribution . Contaminant intrusion in a water distribution network is a complex phenomenon, which depends on three elements - a pathway, a driving force and a contamination source lindley2001framework ; lindley2002assessing ; rasekh2014drinking ; shen2011false ; preis2007contamination . However, the data on these elements are generally incomplete, non-specific and uncertain sadiq2008predicting .

can essentially provide rational solutions for complex real-world problems. The traditional Bayesian (subjectivist) probability approach cannot differentiate between aleatory and epistemic uncertainties and is unable to handle non-specific, ambiguous and conflicting information without making strong assumptions. These limitations can be addressed by the application of Dempster-Shafer evidence theory, which was found to be flexible enough to combine the rigor of probability theory with the flexibility of rule-based systems

Due to the requirements of safety and reliability of the water supply system, risk assessment has been recognised as a useful tool to identify threats, analyse vulnerabilities and risks, and select mitigation measures for water supply systems li2007hierarchical ; weickgenannt2010risk . Accordingly, an object-oriented approach for water supply systems is proposed in li2007hierarchical , which is based on aggregative risk assessment (similar to sadiq2004aggregative ) and fuzzy fault tree analysis and use fuzzy evidential reasoning method to determine the risk levels associated with components, subsystems, and the overall water supply system. Then evidential reasoning model based on Dempster-Shafer evidence theory is applied to estimate risk of contaminant intrusion in water distribution network sadiq2006estimating ; deng2011modeling .

However, there are some shortcomings in previous methods. In the classical Dempster-Shafer evidence theory, a problem domain is indicated by the concept of frame of discernment, and the concept of basic probability assignment (BPA) is used to represent the uncertain information. But there are several hard hypotheses and constraints. For example, the elements in the frame of discernment must be mutually exclusive and the sum of BPA must be equal to 1, which is usually inconsistent with the applications above. These shortcomings have greatly limited its practical application deng2014environmental ; deng2012d .

Recently, a new methodology called D numbers deng2014environmental ; deng2012d ; Deng2014DAHPSupplier ; Deng2014BridgeDNs to represent uncertain information has been proposed, which is an extension of Dempster-Shafer evidence theory. D numbers can effectively represent uncertain information. The exclusive property of the elements in the frame of discernment is not required, and the completeness constraint is released. Due to the propositions of applications in the real word could not be strictly mutually exclusive, these two improvements are greatly beneficial. To get a more accurate uncertain data fusion, a discounting of D numbers based on the exclusive degree is necessary. In this paper, a new exclusive model based on D numbers to combine the uncertain data at a non-exclusive level was proposed.

The rest of the paper is organized as follows. Section 2, some definitions of D numbers is introduced. A step-by-step applications of the proposed model to a numerical example are illustrated in Section 3. In Section 4, the proposal exclusive model based on D numbers was applied to the water distribution networks to assess the risk of contaminant intrusion. Conclusions are given in Section 5.

Situations in the real world are affected by many sources of uncertainty. Many existing theories have been developed to model various types of uncertainty with some desirable properties. However, these theories still contain deficiencies that can not be ignored. For example, due to the inherent advantages in the representation and handling of uncertain information, the Dempster-Shafer evidence theory is being studied for use in many fields. Such as decision making, pattern recognition

tao2012identification , risk assessment sadiq2006estimating ; deng2011risk , supplier selection and others. In the mathematical framework of Dempster-Shafer theory, the basic probability assignment (BPA) defined on the frame of discernment is used to express the uncertainty quantitatively. A problem domain indicated by a finite and mutually exclusive non-empty set Ω is called a frame of discernment. Let 2Ω denote the power set of Ω. The elements in the 2Ω are called propositions. The BPA is a mapping m from 2Ω to [0,1], and satisfying the following condition dempster1967upper ; shafer1976mathematical :

BPA has an advantage of directly expressing the ‘uncertainty’ by assigning the basic probability to the subsets of the set composed of N individual objects, rather than to each of the individual objects. But there exists some strong hypotheses and hard constraints on the frame of discernment and BPA, which limit the practical application of Dempster-Shafer evidence theory. One of the hypotheses is that the elements in the frame of discernment are required to be mutually exclusive. However, this hypothesis is difficult to be satisfied in many situations. For example, the linguistic assessments shown in Fig. 1 can be "Low", "Fairly low", "Medium", "Fairly high", "High". Due to these assessments is based on human judgment, they inevitably contain intersections. The exclusiveness between these propositions can’t be guaranteed precisely, so that the application of Dempster-Shafer evidence theory is questionable and limited in this situation. That means, it is not correct to give a BPA like this: m(Fairlyhigh,High)=0.8,m(High)=0.2.

Let Ω be a finite nonempty set, a D number is a mapping formulated by

It seems that the definition of D numbers is similar to the definition of BPA. But note that, the first difference is the concept of the frame of discernment in Dempster-Shafer evidence theory. The elements in the frame of discernment Ω of D numbers do not require mutually exclusive. Second, the completeness constraint is released in D numbers. If ∑B⊆ΩD(B)=1, the information is said to be complete; if ∑B⊆ΩD(B)≤1, the information is said to be incomplete. An illustrative example is given to show the D numbers as below.

Example 1. Suppose a project is assessed, the assessment score is represented by an interval [0, 100]. In the frame of Dempster-Shafer evidence theory, an expert could give a BPA to express his assessment result:

However, if another expert gives his assessment result by using D numbers, it could be:

Relative matrix. n linguistic constants expressed in normal triangular fuzzy numbers are illustrated in Fig. 2. The area of intersection Sij and union Uij between any two triangular fuzzy numbers Li and Lj can be can calculated to represent the non-exclusive degree between two D numbers. For example, the intersection S12 and the union U12 in Fig. 2. The non-exclusive degree Dij can be calculated as follows:

The combination rule of D numbers. Firstly, the given D numbers should be discounted by the exclusive coefficient ε, which can guarantee the elements in the frame of discernment Ω to be exclusive. The D numbers can be discounted as below:

where Ai is the elements in Ω.

Then the combination rule of D numbers based on the exclusive coefficient is illustrated as follows.

where k is a normalization constant, called conflict because it measures the degree of conflict between D1 and D2.

3 Proposed model based on D numbers

In this section, the proposed model based on D number will be illustrated with a numerical example. In the model, the exclusive coefficient is proposed to represent the exclusive degree among the propositions in the frame of the discernment. From section 2, we know that, one of the advantages of D numbers is that the elements in the frame of the discernment Ω are not required to be mutually exclusive. It’s clear that propositions of application in real world can’t be completely mutually exclusive, so define the exclusive coefficient to undermine the non-exclusive property is essential. For example, linguistic assessment based on human judgment can be "fairly good", "good" and "very good", which is obviously non-exclusive but need to be assessed. A numerical example to show the proposed method is illustrated through a step-by-step description.

Step 2 Calculate the area of intersection Si,j and the union Ui,j between any two trapezoidal fuzzy numbers Di and Dj respectively. For example, S12,S23,S34 and S45 in the Fig. 1 is some intersections.

Step 5 Calculate the exclusive coefficient ε through Eq. 6. That is:

Step 6 Discounting the D numbers according to Eq. 7. Two D number D1 and D2 based on the fuzzy numbers in Table 1 are shown in Table 2. Then we can discount these two D numbers using the exclusive coefficient ε, the results D(Ai)ε are also in Table 2.

Step 7 Use the combination rule of D numbers given in Section 2 to get the final assessment. Namely:

In previous work sadiq2006estimating ; deng2011modeling , the problem domain of risk of an intrusion can be described by a universal set Θ={P,NP}, in which ‘P’ denotes ‘possible’ and ‘NP’ denotes ‘not possible’ intrude. The power set of the risk of intrusion consists of two singletons {P} and, {NP}, a universal set {P,NP} and the empty set {ϕ}. As described earlier, the risk of contaminant intrusion can be evaluated based on three elements C a pathway (e1), a driving force (e2), and a contamination source (e3).

For this problem, we propose a new contaminant intrusion model based on D numbers, which make use of the exclusive coefficient to represent the exclusive degree among the propositions of the water distribute networks. A step-by-step description is provided below:

Step 2 Identify D numbers of these three evidence bodies respectively. We first choose a scenario from Fig. 3, in which the following bodies of evidence are observed:

The possibility of pressure drop to ‘0 psi’ at the respective node (Fig. 3(b)).

Step 3 Following steps in section 3 to calculate the exclusive coefficient of these evidence bodies respectively. Results are shown as follows.

To illustrate the efficiency of the proposed method, we choose five additional scenarios as sadiq2006estimating do. The results obtained through both methods are illustrated in Table 4.

The proposed model make the assessment based on D numbers discounted by the exclusive coefficient, which reflects the exclusive degree of these propositions. While the method in sadiq2006estimating use the Dempster-Shafer evidence theory based on the mutually exclusive hypothesis between the propositions, which is impractical in the real-word applications. From the results, we can see that, the incompleteness of the result on the bias of exclusive coefficient is much smaller than that of sadiq2006estimating . The proposed method not only allow the propositions of application to be non-exclusive, but also give a more effective assessment.

One of the assumptions to apply the Dempster-Shafer evidence evidence theory is that all the elements in the frame of discernment should be mutually exclusive. However, it is difficult to meet the requirement in the real-world applications. In this paper, a new mathematic tool to model uncertain information, called as D numbers, is used to model and combine the domain experts’ opinions under the condition that the linguistic constants are not exclusive with each other. An exclusive coefficient is proposed to discount the D numbers. After the discounted D numbers are obtained, the domain experts’ opinion can be fused based on our proposed combination rule of D numbers. The application to estimate the risk of the contamination intrusion of the water distribution network illustrates the efficiency of our proposed D numbers method.