The rapid evolution of scientific research has been creating a huge volume of publications every year. Among the many quantification measures of scientific impact, citation count stands out for its frequent use in the research community. Although peer review process is the mainly reliable way of predicting a paper's future impact, the ability to foresee lasting impact on the basis of citation records is increasingly important in the scientific impact analysis in the era of big data. This paper focuses on the long-term citation count prediction for individual publications, which has become an emerging and challenging applied research topic. Based on the four key phenomena confirmed independently in previous studies of long-term scientific impact quantification, including the intrinsic quality of publications, the aging effect and the Matthew effect and the recency effect, we unify the formulations of all these observations in this paper. Building on a foundation of the above formulations, we propose a long-term citation count prediction model for individual papers via recurrent neural network with long short-term memory units. Extensive experiments on a real-large citation data set demonstrate that the proposed model consistently outperforms existing methods, and achieves a significant performance improvement. 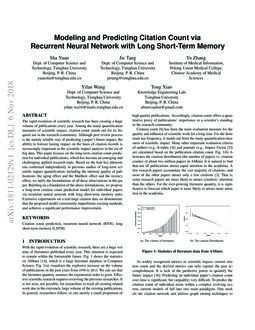 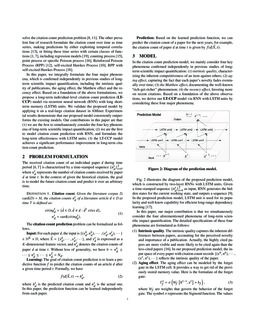 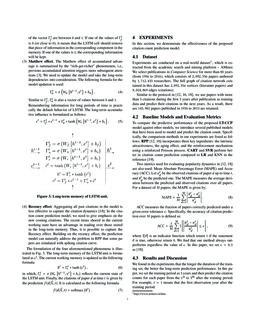 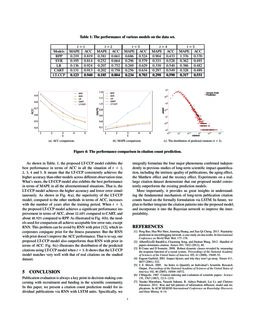 An ability to predict the popularity dynamics of individual items within...
Sha Yuan, et al. ∙

Attention: to Better Stand on the Shoulders of Giants

The scoring of patents is useful for technology management analysis. The...
Asahi Hentona, et al. ∙

Towards an LSTM-based Predictive Framework for Literature-based Knowledge Discovery

With the rapid evolution of scientific research, there are a huge volume of literatures published every year. This situation is expected to remain within the foreseeable future. Fig. 1 shows the statistics on AMiner (Tang et al., 2008), which is a large literature database in Computer Science. Fig. 1(a) visualizes the explosive increase on the volume of publications in the past years from 1990 to 2015. We can see that the literature quantity assumes the exponential order to grow. Effective scientific research requires reviewing the previous researches. It is not wise, nor possible, for researchers to track all existing related work due to the extremely large volume of the existing publications. In general, researchers follow, or cite merely a small proportion of high quality publications. Accordingly, citation count offers a quantitative proxy of publications’ importance or a scientist’s standing in the research community.

Citation count (Margolis, 1967) has been the main evaluation measure for the quality and influence of scientific work for a long time. For the dominant use frequency, it stands out from the many quantification measures of scientific impact. Many other important evaluation criteria of authors (e.g., h-index (Garfield, 2001)) and journals (e.g., Impact Factor (Hirsch, 2005)) are calculated based on the publication citation count. Fig. 1(b) illustrates the citation distribution (the number of papers vs. citation counts) of about two million papers in AMiner. It is natural to find that not all publications attract equal attention in the academia. A few research papers accumulate the vast majority of citations, and most of the other papers attract only a few citations (Barab si et al., 2012). That is, some research papers are more likely to attract scientists’ attention than the others. For the ever-growing literature quantity, it is significative to forecast which paper is more likely to attract more attention in the academia.

In this paper, we integrally formulate the four major phenomena, which is confirmed independently in previous studies of long-term scientific impact quantification, including the intrinsic quality of publications, the aging effect, the Matthew effect and the recency effect. Based on a foundation of the above formulations, we propose a long-term individual-level citation count prediction (LT-CCP) model via recurrent neural network (RNN) with long short-term memory (LSTM) units. We validate the proposed model by applying it on a real-large citation dataset in AMiner. Experimental results demonstrate that our proposed model consistently outperforms the existing models. Our contributions in this paper are that: (1) we are the first to simultaneously consider the four key phenomena of long-term scientific impact quantification; (2) we are the first to model citation count prediction with RNN, and formulate the long-term effectiveness with LSTM units; (3) the LT-CCP model achieves a significant performance improvement in long-term citation count prediction.

The received citation count of an individual paper d during time period [0,T] is characterized by a time-stamped sequence {ntd}Tt=0, where ntd represents the number of citation counts received by paper d at time t. In the context of given the historical citation, the goal is to model the future citation count and predict it over an arbitrary time.

The citation count prediction problem can be formalized as follows.

ntd denotes the citation counts of paper d at time t. Without loss of generality, we have 0=n0d≤⋯≤ntd≤⋯≤nTd=Nd.

Learning: The goal of citation count prediction is to learn a predictive function f to predict the citation counts of an article d after a given time period t. Formally, we have

where ^ntd is the predicted citation count and ntd is the actual one. In this paper, the prediction function can be learned independently from each paper.

In the citation count prediction model, we mainly consider four key phenomena confirmed independently in previous studies of long-term scientific impact quantification: (1) intrinsic quality, characterizing the inherent competitiveness of an item against others; (2) aging effect, capturing the fact that each paper’s novelty fades eventually over time; (3) the Matthew effect, documenting the well-known “rich-get-richer” phenomenon; (4) the recency effect, favoring more on recent citations. Based on a foundation of the above observations, we derive our LT-CCP model via RNN with LSTM units by considering these four major phenomena.

Fig. 2 illustrates the diagram of the proposed prediction model, which is constructed by two-layer RNNs with LSTM units. Given a time-stamped sequence {ntd}Tt=0 as input, RNN generates the hidden states for the current working state, and outputs a sequence (Pascanu et al., 2012). In the proposed prediction model, LSTM unit is used for its popularity and well-know capability for efficient long-range dependency learning (Xiao et al., 2017).

In this paper, our major contribution is that we simultaneously consider the four aforementioned phenomena of long-term scientific impact quantification. The detailed specifications of these four phenomena are formulated as follows:

The formulation of the four aforementioned phenomena is illustrated in Fig. 3. The long-term memory of the LSTM unit is formulated as ct. The current working memory is updated as the following formula:

in which, Γtr=σ(Wr[ht−1,xt]+br) reflects the current state of the LSTM unit. Finally, the citations of paper d at time t is given by the prediction f(d|→X,t). It is calculated as the following formula:

In this section, we demonstrate the effectiveness of the proposed citation count prediction model.

Experiments are conducted on a real-world dataset111https://www.aminer.cn/data, which is extracted from the academic search and mining platform – AMiner. We select publications in Computer Science for more than 80 years (from 1936 to 2016), which consists of 2,092,356 papers authored by 1,712,433 researchers. The full graph of citation network contained in this dataset has 2,092,356 vertices (literature papers) and 8,024,869 edges (citations).

To compare the predictive performance of the proposed LT-CCP model against other models, we introduce several published models that have been used to model and predict the citation count. Specifically, the comparison methods in our experiments are listed as follows. RPP (Wang and Barab si, 2013; Shen et al., 2014) incorporates three key ingredients: the intrinsic attractiveness, the aging effect, and the reinforcement mechanism using a reinforced Poisson process. CART and SVR perform better in citation count prediction compared to LR

and KNN in the reference

Two metrics used for evaluating popularity dynamics in (Shen et al., 2014; Xiao et al., 2016) are also used: Mean Absolute Percentage Error (MAPE) and Accuracy (ACC). Let ntd be the observed citations of paper d up to time t, and ^ntd be the predicted one. The MAPE measures the average deviation between the predicted and observed citations over all papers. For a dataset of M papers, the MAPE is given by:

ACC measures the fraction of papers correctly predicted under a given error tolerance ϵ. Specifically, the accuracy of citation prediction over M papers is defined as:

where I[θ] is an indicator function which return 1 if the statement θ is true, otherwise return 0. We find that our method always outperforms regardless the value of ϵ. In this paper, we set ϵ=0.3 as (Xiao et al., 2016).

, which incorporates conjugate prior for the fitness parameter. But the RNN with prior doesn’t improve the ACC performance. That is to say, our proposed LT-CCP model also outperforms than RNN with prior in terms of ACC. Fig.

4(c) illustrates the distribution of the predicted citations using LT-CCP model when t=5. It shows that the LT-CCP model matches very well with that of real citations on the studied dataset.

Publication evaluation is always a key point in decision making concerning with recruitment and funding in the scientific community. In this paper, we present a citation count prediction model for individual publications via RNN with LSTM units. Specifically, we integrally formulate the four major phenomena confirmed independently in previous studies of long-term scientific impact quantification, including the intrinsic quality of publications, the aging effect, the Matthew effect and the recency effect. Experiments on a real-large citation dataset demonstrate that our proposed model consistently outperforms the existing prediction models.

More importantly, it provides us great insights in understanding the fundamental mechanism of long-term publication citation counts based on the formally formulation via LSTM. In future, we plan to further integrate the citation patterns into the proposed model, and incorporate it into the Bayesian network to improve the interpretability.