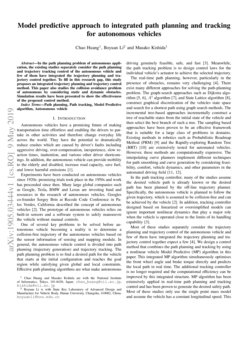 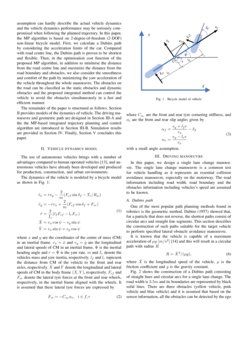 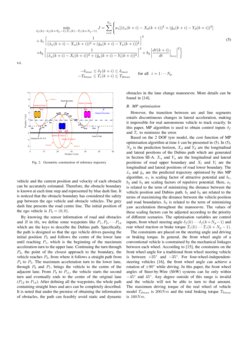 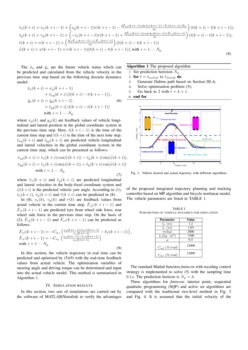 Autonomous vehicles have a promising future of making transportation time effortless and enabling the drivers to partake in other activities and therefore change everyday life across the world. They have the potential to dramatically reduce crashes which are caused by driver’s faults including aggressive driving, over-compensation, inexperience, slow reaction times, inattention, and various other driver shortcomings. In addition, the autonomous vehicle can provide mobility to the elderly and disabled, increase road capacity, save fuel, and lower harmful emissions [1].

The real-time path planning, however, particularly in the presence of obstacles, remains very challenging [4]. There exist many different approaches for solving the path-planning problem. The graph-search approaches such as Dijkstra algorithm [5, 6], A⋆ algorithm [7], and State Lattice algorithm [8], construct graphical discretization of the vehicle’s state space and search for a shortest path using graph search methods. The incremental tree-based approaches incrementally construct a tree of reachable states from the initial state of the vehicle and then select the best branch of such a tree. The sampling based approaches have been proven to be an effective framework that is suitable for a large class of problems in domains. Existing methods in robotics such as Probabilistic Roadmap Method (PRM) [9] and the Rapidly-exploring Random Tree (RRT) [10]

are extensively tested for automated vehicles. However, these methods are computationally expensive. The interpolating curve planners implement different techniques for path smoothing and curve generation by considering feasibility, comfort, vehicle dynamics, and other parameters in the automated driving field

In the path tracking controller, many of the studies assume the desired vehicle path is already known or the desired path has been planned by the off-line trajectory planner. Specifically, the autonomous vehicle is planned to follow the given trajectory, which is assumed to be collision-free and can be achieved by the vehicle [2]. In addition, tracking controller designed based on linearized or oversimplified models can ignore important nonlinear dynamics that play a major role when the vehicle is operated close to the limits of its handling capability [3].

. We design a control method that combines the path planning and tracking by using a nonlinear vehicle Model Predictive (MP) algorithm in this paper. This integrated MP algorithm simultaneously optimises the front wheel angle and brake torque directly and predicts the local path in real time. The additional tracking controller is no longer required and the computational efficiency can be improved by this integrated structure. MP algorithm has been extensively applied in real-time path planning and tracking control and has been proven to generate the desired safety path. Most of these studies only use the single point mass model and assume the vehicle has a constant longitudinal speed. This assumption can hardly describe the actual vehicle dynamics and the vehicle dynamics performance may be seriously compromised when following the planned trajectory. In this paper, the MP algorithm is based on 2-degree-of-freedom (2-DOF) non-linear bicycle model. First, we calculate a Dubins path by considering the acceleration limits of the car. Compared with road centre line, the Dubins path is proven to be shortest and flexible. Then, in the optimisation cost function of the proposed MP algorithm, in addition to minimise the distance from the road centre line and maximize the distance from the road boundary and obstacles, we also consider the smoothness and comfort of the path by minimizing the yaw acceleration of the vehicle throughout the whole manoeuvre. The obstacles on the road can be classified as the static obstacles and dynamic obstacles and the proposed integrated method can control the vehicle to avoid the obstacles simultaneously in a fast and efficient manner.

The remainder of the paper is structured as follows. Section II provides models of the dynamics of vehicle. The driving manoeuvre and geometric path are designed in Section III-A and the the MP-based integrated trajectory planning and control algorithm are introduced in Section III-B. Simulation results are provided in Section IV. Finally, Section V concludes this paper.

The dynamics of the vehicle is modeled by a bicycle model as shown in Fig. 1:

with a small angle assumption.

One of the most popular path planning methods found in robotics is the geometric method. Dubins (1957) showed that, for a particle that does not reverse, the shortest paths consist of circular arcs and straight line segments. This section describes the construction of such paths suitable for the target vehicle to perform specified lateral obstacle avoidance manoeuvre.

where ˙X is the longitudinal speed of the vehicle, μ is the friction coefficient and g is the gravity constant.

Fig. 2 shows the construction of a Dubins path consisting of straight lines and circular arcs for a single lane change. The road width is 3.5m

By knowing the sensor information of road and obstacles and R in (6), we define some waypoints like P1,P2,⋯P14 which are the keys to describe the Dubins path. Specifically, the path is designed so that the ego vehicle drives passing the initial position P0 and follows the centre of the lower lane until reaching P1, which is the beginning of the maximum acceleration turn to the upper lane. Continuing the turn through P2, the point of the closest approach to the boundary, the vehicle reaches P3, from where it follows a straight path from P4 to P5. The maximum acceleration turn to the lower lane, through P6 and P7, brings the vehicle to the centre of the adjacent lane. From P8 to P11, the vehicle starts the second turn and eventually ends to the centre of the original lane (P12 to P14). After defining all the waypoints, the whole path containing straight lines and arcs can be completely described. It is noted that under the premise of obtaining the information of obstacles, the path can feasibly avoid static and dynamic obstacles in the lane change manoeuvre. More details can be found in [14].

However, the transition between arc and line segments entails discontinuous changes in lateral acceleration, making it impossible for real autonomous vehicle to track exactly. In this paper, MP algorithm is used to obtain control inputs δf and Tr to minimize the error.

The ^xa and ^ya are the future vehicle status which can be predicted and calculated from the vehicle velocity in the previous time step based on the following discrete dynamics model:

In this section, the vehicle trajectory in real time can be predicted and optimised by (5)–(9) with the real-time feedback values from actual vehicle. The optimisation variables of steering angle and driving torque can be determined and input into the actual vehicle model. This method is summarized in Algorithm 1.

In this section, two sets of simulations are carried out by the software of MATLAB/Simulink to verify the advantages of the proposed integrated trajectory planning and tracking controller based on MP algorithm and bicycle nonlinear model. The vehicle parameters are listed in TABLE 1.

The standard Matlab function fmincon with receding control strategy is implemented to solve (5) with the sampling time 0.1s. The prediction horizon is Np=3.

Three algorithms for fmincon: interior point, sequential quadratic programming (SQP) and active set algorithms are compared with the traditional two-level method in Fig. 3 and Fig. 4. It is assumed that the initial velocity of the autonomous vehicle is 10m/s and all the obstacles are static. under the assumption that the obstacles are static. Compared with traditional two-level method, the MP trajectories can provide a smooth and flexible path. We select the active set algorithm (red dash line) in the following simulations.