Testing for series correlation among error terms is a basic problem in linear regression model diagnostics. The famous Durbin-Watson test and Durbin's h-test rely on certain model assumptions about the response and regressor variables. The present paper proposes simple tests for series correlation that are applicable in both fixed and random design linear regression models. The test statistics are based on the regression residuals and design matrix. The test procedures are robust under different distributions of random errors. The asymptotic distributions of the proposed statistics are derived via a newly established joint central limit theorem for several general quadratic forms and the delta method. Good performance of the proposed tests is demonstrated by simulation results. 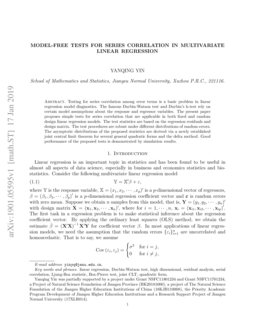 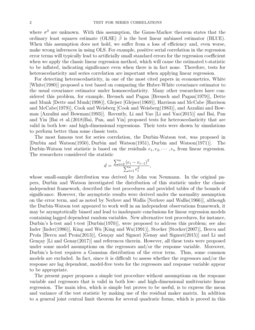 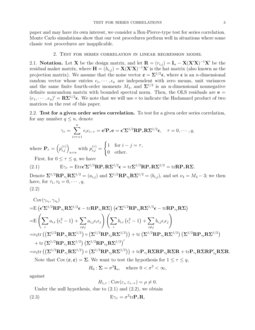 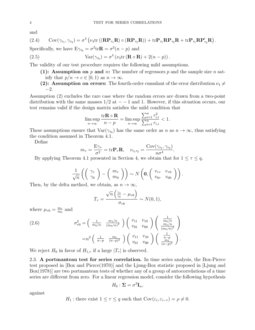 is the response variable,

. The first task in a regression problem is to make statistical inference about the regression coefficient vector. By applying the ordinary least squares (OLS) method, we obtain the estimate

^β=(X′X)−1X′Y for coefficient vector β. In most applications of linear regression models, we need the assumption that the random errors {εi}ni=1 are uncorrelated and homoscedastic. That is to say, we assume

where σ2 are unknown. With this assumption, the Gauss-Markov theorem states that the ordinary least squares estimate (OLSE) ^β

is the best linear unbiased estimator (BLUE). When this assumption does not hold, we suffer from a loss of efficiency and, even worse, make wrong inferences in using OLS. For example, positive serial correlation in the regression error terms will typically lead to artificially small standard errors for the regression coefficient when we apply the classic linear regression method, which will cause the estimated t-statistic to be inflated, indicating significance even when there is in fact none. Therefore, tests for heteroscedasticity and series correlation are important when applying linear regression.

For detecting heteroscedasticity, in one of the most cited papers in econometrics, White [White(1980)] proposed a test based on comparing the Huber-White covariance estimator to the usual covariance estimator under homoscedasticity. Many other researchers have considered this problem, for example, Breusch and Pagan [Breusch and Pagan(1979)], Dette and Munk [Dette and Munk(1998)], Glejser [Glejser(1969)], Harrison and McCabe [Harrison and McCabe(1979)], Cook and Weisberg [Cook and Weisberg(1983)], and Azzalini and Bowman[Azzalini and Bowman(1993)]. Recently, Li and Yao [Li and Yao(2015)] and Bai, Pan and Yin [Bai et al.(2018)Bai, Pan, and Yin] proposed tests for heteroscedasticity that are valid in both low- and high-dimensional regressions. Their tests were shown by simulations to perform better than some classic tests.

whose small-sample distribution was derived by John von Neumann. In the original papers, Durbin and Watson investigated the distribution of this statistic under the classic independent framework, described the test procedures and provided tables of the bounds of significance. However, the asymptotic results were derived under the normality assumption on the error term, and as noted by Nerlove and Wallis [Nerlove and Wallis(1966)]

, although the Durbin-Watson test appeared to work well in an independent observations framework, it may be asymptotically biased and lead to inadequate conclusions for linear regression models containing lagged dependent random variables. New alternative test procedures, for instance, Durbin’s h-test and t-test

The present paper proposes a simple test procedure without assumptions on the response variable and regressors that is valid in both low- and high-dimensional multivariate linear regression. The main idea, which is simple but proves to be useful, is to express the mean and variance of the test statistic by making use of the residual maker matrix. In addition to a general joint central limit theorem for several quadratic forms, which is proved in this paper and may have its own interest, we consider a Box-Pierce-type test for series correlation. Monte Carlo simulations show that our test procedures perform well in situations where some classic test procedures are inapplicable.

Let X be the design matrix, and let R=(ri,j)=In−X(X′X)−1X′ be the residual maker matrix, where H=(hi,j)=X(X′X)−1X′ is the hat matrix (also known as the projection matrix). We assume that the noise vector ε=Σ1/2ϵ, where ϵ is an n-dimensional random vector whose entries ϵ1,⋯,ϵn

are independent with zero means, unit variances and the same finite fourth-order moments

M4, and Σ1/2 is an n-dimensional nonnegative definite nonrandom matrix with bounded spectral norm. Then, the OLS residuals are e=(e1,⋯,en)′=RΣ1/2ϵ. We note that we will use ∘ to indicate the Hadamard product of two matrices in the rest of this paper.

2.2. Test for a given order series correlation

To test for a given order series correlation, for any number q≤n, denote

Under the null hypothesis, due to (

Specifically, we have Eγτ0=σ2trR=σ2(n−p) and

The validity of our test procedure requires the following mild assumptions.

The fourth-order cumulant of the error distribution ν4≠−2.

Assumption (2) excludes the rare case where the random errors are drawn from a two-point distribution with the same masses 1/2 at −−1 and 1. However, if this situation occurs, our test remains valid if the design matrix satisfies the mild condition that

These assumptions ensure that Var(γτ0) has the same order as n as n→∞, thus satisfying the condition assumed in Theorem 4.1.

By applying Theorem 4.1 presented in Section 4, we obtain that for 1≤τ≤q,

2.3. A portmanteau test for series correlation

In time series analysis, the Box-Pierce test proposed in [Box and Pierce(1970)] and the Ljung-Box statistic proposed in [Ljung and Box(1978)] are two portmanteau tests of whether any of a group of autocorrelations of a time series are different from zero. For a linear regression model, consider the following hypothesis

and the delta method, we shall now consider the following asymptotically standard normally distributed statistic

2.4. Discussion of the statistics

In the present subsection, we discuss the asymptotic parameters of the two proposed statistics.

If the entries in design matrix X are assumed to be i.i.d. standard normal, then we know that as n→∞, the diagonal entries in the symmetric and idempotent matrices H and R=In−H are of constant order while the off-diagonal entries are of order n−1/2. Then, the order of mτ=trPτR for a given τ>0 is at most n1/2 since it is exactly the summation of the n−τ off-diagonal entries of R. Thus, elementary analysis shows that σ2τ0=n2v11(n−p)2+o(1).

For a fixed design or a more general random design, it become almost impossible to study matrices H and R=In−H, except for some of the elementary properties. Thus, for the purpose of obtaining an accurate statistical inference, we suggest the use of the original parameters since we have little information on the distribution of the regressors in a fixed design, and the calculation of those parameters is not excessively complex.

In this section, Monte Carlo simulations are conducted to investigate the performance of our proposed tests.

First, we consider the test for first-order series correlation of the error terms in multivariate linear regression model (1.1). Note that although our theory results were derived by treating the design matrix as a constant matrix, we also need to obtain a design matrix under a certain random model in the simulations. We thus consider the situation where the regressors x1,x2,⋯,xf are lagged dependent. Formally, for a given f, we set

are independently chosen from a Student’s t-distribution with 5 degrees of freedom. The random errors

α=0.05. Table 1 and Table 2 show the empirical size of our test (denoted as ‘‘FDWT") for different p,n,f under the two error distributions. To investigate the power of our test, we randomly choose a ε0 and consider the following AR(1) model:

These simulation results show that our test always has good size and power when n−p is large and is thus applicable under the framework that p/n→[0,1) as n→∞.

3.2. Performance of the Box-Pierce type test

This subsection investigates the performance of our proposed Box-Pierce type test statistic T(q) in subsection 2.3. The design matrix X is obtained in the same way as in the last subsection, with f=p/2

, and the random error terms are assumed to obey a (1) normal distribution N(0,1) and a (2) gamma distribution with parameters 4 and 1/2. Table

5 and Table 6 show the empirical size of our test with different n,p,q under the two error distributions. We consider the following AR(2) model to assess the power:

where {ϑt} are independently drawn from (1) N(0,1) and (2) Gamma(4,1/2). The design matrix X is obtained in the same way as before, with f=p/2. Tables 7 and 8 show the empirical power of our proposed test for different p,n,ρ under the two error distributions.

As shown by these simulation results, the empirical size and empirical power of the portmanteau test improve as n−p tends to infinity.

3.3. Parameter estimation under the null hypothesis

Then, ν4 can be estimated by a consistent estimator

In this section, we establish a general joint CLT for several general quadratic forms, which helps us to find the asymptotic distribution of the statistics for testing the series correlations. We believe that the result presented below may have its own interest.

Quadratic forms play an important role not only in mathematical statistics but also in many other branches of mathematics, such as number theory, differential geometry, linear algebra and differential topology. Suppose ε=(ε1,ε2,⋯,εn)′, where {εi}ni=1 is a sample of size n drawn from a certain standardized population. Let A=(aij)n×n be a matrix. Then, ε′Aε=∑i,jaijεiεj is called a random quadratic form in ε. The random quadratic forms of normal variables, especially when A is symmetric, have been considered by many authors, who have achieved fruitful results. We refer the reader to [Bartlett et al.(1960)Bartlett, Gower, and Leslie, Darroch(1961), Gart(1970), Hsu et al.(1999)Hsu, Prentice, Zhao, and Fan, Forchini(2002), Dik and De Gunst(2010), Al-Naffouri et al.(2016)Al-Naffouri, Moinuddin, Ajeeb, Hassibi, and Moustakas]. Furthermore, many authors have considered the more general situation, where ε follow a non-Gaussian distribution. For the properties of those types of random quadratic forms, we refer the reader to [Fox and Taqqu(1985), Cambanis et al.(1985)Cambanis, Rosinski, and Woyczynski, de Jong(1987), Gregory and Hughes(1995), Gotze and Tikhomirov(1999), Liu et al.(2009)Liu, Tang, and Zhang, Deya and Nourdin(2014), Oliveira(2016)] and the references therein.

To this end, suppose

is a q×nrandom matrix. Let {Al=a(l)i,j},1≤i,j≤n,1≤l≤q be q nonrandom n-dimensional matrices. Define Ql=∑ni,j=1a(l)i,jε(l)iε(l)j for 1≤l≤q. We are interested in the asymptotic distribution, as n→∞, of the random vector (Q1,Q2,⋯,Qq), which consists of q random quadratic forms. Now, we make the following assumptions.

Thus, according to assumptions (a)−(c), for any 1≤l≤q, Var(Ql) at most has the same order as n. This result also holds for any Cov(Ql1,Ql2) by applying the Cauchy-Schwartz inequality. We then have the following theorem.

In addition to assumptions (a)-(c), suppose that there exists an i such that Var(Qi) has the same order as n when n→∞. Then, the distribution of the random vector n−1/2(Q1,Q2,⋯,Qq) is asymptotically q-dimensional normal.

We are now in position to present the proof of the joint CLT via the method of moments. The procedure of the proof is similar to that in [Bai et al.(2018)Bai, Pan, and Yin] but is more complex since we need to establish the CLT for a q-dimensional, rather than 2-dimensional, random vector. Moreover, we do not assume the underlying distribution to be symmetric and identically distributed. The proof is separated into three steps.

Therefore, we need only to investigate the limiting distribution of the vector (˜Q1,˜Q2,⋯,˜Qq).

Noting that ˘ε(i)j’s are independent random variables with 0 means and unit variances, it follows that

Noting that the entries in the covariance matrix of the random vector (Q1,Q2,⋯,Qq)′ have at most the same order as n, we conclude that n−1/2(<span class="mjx-char MJXc-TeX-math-I" style="padding-top: