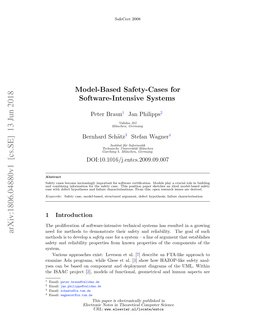 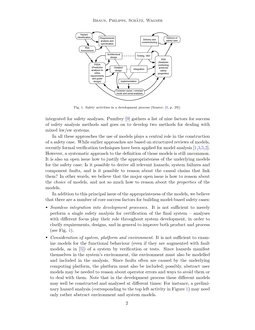 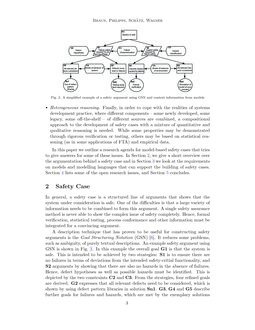 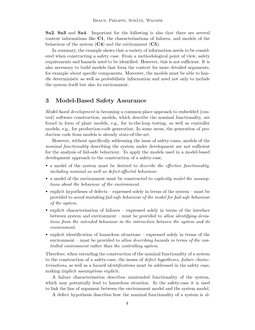 Various approaches exist: Leveson et al. [7] describe an FTA-like approach to examine Ada programs, while Giese et al. [3] show how HAZOP-like safety analyses can be based on component and deployment diagrams of the UML. Within the ISAAC project [2], models of functional, geometrical and human aspects are integrated for safety analyses. Pumfrey [9] gathers a list of nine factors for success of safety analysis methods and goes on to develop two methods for dealing with mixed hw/sw systems.

In all these approaches the use of models plays a central role in the construction of a safety case. While earlier approaches are based on structured reviews of models, recently formal verification techniques have been applied for model analysis [1, 3, 5, 2]. However, a systematic approach to the definition of those models is still uncommon. It is also an open issue how to justify the appropriateness of the underlying models for the safety case: Is it possible to derive all relevant hazards, system failures and component faults, and is it possible to reason about the causal chains that link them? In other words, we believe that the major open issue is how to reason about the choice of models, and not so much how to reason about the properties of the models.

In addition to this principal issue of the appropriateness of the models, we believe that there are a number of core success factors for building model-based safety cases:

In this paper we outline a research agenda for model-based safety cases that tries to give answers for some of these issues. In Section 2, we give a short overview over the argumentation behind a safety case and in Section 3 we look at the requirements on models and modelling languages that can support the building of safety cases. Section 4 lists some of the open research issues, and Section 5 concludes.

In general, a safety case is a structured line of arguments that shows that the system under consideration is safe. One of the difficulties is that a large variety of information needs to be combined to form this argument. A single safety assurance method is never able to show the complex issue of safety completely. Hence, formal verification, statistical testing, process conformance and other information must be integrated for a convincing argument.

A description technique that has proven to be useful for constructing safety arguments is the Goal Structuring Notation (GSN) [6]. It reduces some problems, such as ambiguity, of purely textual descriptions. An example safety argument using GSN is shown in Fig. 2. In this example the overall goal G1 is that the system is safe. This is intended to be achieved by two strategies: S1 is to ensure there are no failures in terms of deviations from the intended safety-critial functionality, and S2 arguments by showing that there are also no hazards in the absence of failures. Hence, defect hypotheses as well as possible hazards must be identified. This is depicted by the two constraints C2 and C3. From the strategies, four refined goals are derived. G2 expresses that all relevant defects need to be considered, which is shown by using defect pattern libraries in solution Sn1. G3, G4 and G5 describe further goals for failures and hazards, which are met by the exemplary solutions Sn2, Sn3 and Sn4. Important for the following is also that there are several context informations like C1, the characterisations of failures, and models of the behaviour of the system (C4) and the environment (C5).

In summary, the example shows that a variety of information needs to be considered when constructing a safety case. From a methodological point of view, safety requirements and hazards need to be identified. However, this is not sufficient. It is also necessary to build models that form the context for more detailed arguments, for example about specific components. Moreover, the models must be able to handle deterministic as well as probabilistic information and need not only to include the system itself but also its environment.

Model-based development is becoming a common-place approach to embedded (control) software construction; models, which describe the nominal functionality, are found in form of plant models, e.g., for in-the-loop testing, as well as controller models, e.g., for production-code generation. In some areas, the generation of production code from models is already state-of-the-art.

However, without specifically addressing the issue of safety-cases, models of the nominal functionality describing the system under development are not sufficient for the analysis of fail-safe behaviour. To apply the models used in a model-based development approach to the construction of a safety-case,

Therefore, when extending the construction of the nominal functionality of a system to the construction of a safety-case, the issues of defect hypotheses, failure characterisations, as well as a hazard identifications must be addressed in the safety case, making implicit assumptions explicit.

A failure characterisation describes unintended functionality of the system, which may potentially lead to hazardous situation. In the safety-case it is used to link the line of argument between the environment model and the system model.

A defect hypothesis describes how the nominal functionality of a system is altered to reflect the possible occurrences of faults. As defects may be introduced in different parts of a system, different defect hypotheses are needed, e.g, to reflect defects caused by a deviation from the intended functionality of the system platform (i.e., hardware defects), or faults caused by a deviation from the intended control functionality (i.e., design defects). For practical application, defect hypotheses are often described in form of fault patterns, e.g., in form of intermittent occurrences of value changes to reflect influences of alpha radiation.

Separating these three properties as well as using separate models of system and environment reduces the complexity of the overall argument and minimises the risk of constructing inadequate lines of arguments.

For each of these steps, different solution techniques can be applied. E.g., applying defect patterns for the identified defects can be used in step 3, while a simulation of the environment model can be used in step 4. Furthermore, steps 5 and 6 themselves are complex verification goals, requiring appropriate sub-goals and sub-solutions.

Based on the ideas of the previous section, we briefly state the most important open issues that need to be addressed.

Safety Case. To start with, how can safety requirements and possible hazards be effectively elicited? When is the safety case complete? A strong structure needs to be provided for the safety engineering in the form of safety patterns and reusing existing parts of safety cases. Moreover, the approach has to be mapped to existing (an potentially new) standards to allow certification.

Models. In general, the question is how can be assured that the built models are suitable for safety analysis. The quality of these models is decisive for the whole safety case. There is a plethora of questions: On what level of granularity are the models built? What are suitable interfaces between components so that complex causal chains can be analysed? What are proper defect hypotheses and failure characterisations? Too much detail is not manageable, not enough detail leads to omissions.

Supporting Methods. Finally, various and diverse methods need to be used for arguing in the safety case. Hence, quantitative and qualitative as well as deterministic and probabilistic methods need to be used and integrated in the argument. When is formal verification needed and feasible, when are other arguments necessary and sufficient?

Safety cases become increasingly important for software-intensive systems. The current state-of-practice, FTA and FMEA, are not sufficient for the enormously complex and interconnected modern systems. Hence, we need suitable models, not only of the system but also of its environment, especially its users. These models are needed as basis for formal verification. Moreover, they feed into the complete and structured argument in a safety case. We described how model-based safety analysis and safety case development should ideally look like and derived a set of open research issues that need to be addressed. We are currently in the process of discussing with industrial partners first steps to tackle these issues.