Clustering is the process of finding and analyzing underlying group structures in data. In recent years, data as become increasingly higher dimensional and therefore an increased need for dimension reduction techniques for use in clustering. Although such techniques are firmly established in the literature for multivariate data, there is a relative paucity in the area of matrix variate or three way data. Furthermore, these few methods all assume matrix variate normality which is not always sensible if skewness is present. We propose a mixture of bilinear factor analyzers model using four skewed matrix variate distributions, namely the matrix variate skew-t, generalized hyperbolic, variance gamma and normal inverse Gaussian distributions. 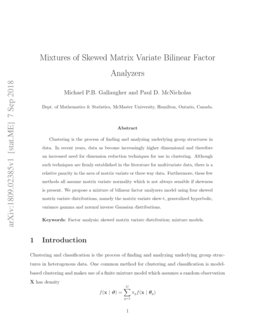 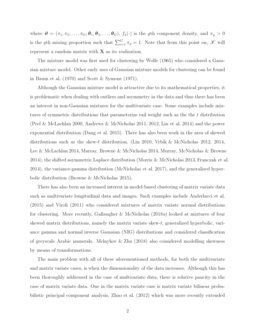 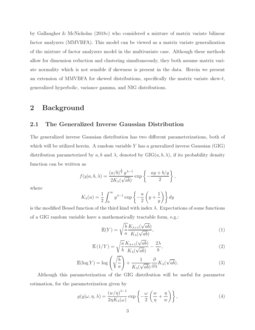 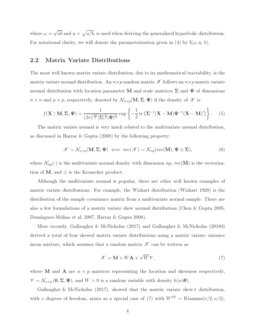 In this study, a numerical quadrature for the generalized inverse Gaussi...
Jaehyuk Choi, et al. ∙

Granular Computing: An Augmented Scheme of Degranulation Through a Modified Partition Matrix

Classification is the process of finding and analyzing underlying group structure in heterogenous data. This problem can be framed as the search for class labels of unlabelled observations. In general, some (non-trivial) proportion of observations have known labels. A special case of classification, known as clustering, occurs when none of the observations have known labels. One common approach for clustering is mixture model-based clustering, which makes use of a finite mixture model. In general, a G

where ϑ=(π1,π2,…,πG,θ1,θ2,…,θG), fg(⋅) is the gth component density, and πg>0 is the gth mixing proportion such that ∑Gi=1πg=1. Note that the notation used in (1) corresponds to the multivariate case and, save for Appendix A, X will hereafter represent a matrix variate random variable with X denoting its realization.

. Although the Gaussian mixture model is attractive due to its mathematical properties, it is problematic when dealing with outliers and asymmetry in the data and thus there has been an interest in non-Gaussian mixtures for the multivariate case. Some examples of mixtures of symmetric distributions that parameterize tail weight include the

and the power exponential distribution

There has also been an increased interest in model-based clustering of matrix variate data such as multivariate longitudinal data and images. Such examples include the work of Viroli (2011) and Anderlucci et al. (2015)

Zhao et al. (2012). More recently, Gallaugher & McNicholas (2018b) considered the closely-related mixture of matrix variate bilinear factor analyzers (MMVBFA) model for clustering. The MMVBFA model can be viewed as a matrix variate generalization of the mixture of factor analyzers model (Ghahramani & Hinton 1997) in the multivariate case. Although these methods allow for simultaneous dimension reduction and clustering, they both assume matrix variate normality which is not sensible if cluster skewness or heavy tails are present. Herein we present an extension of the MMVBFA model to skewed distributions, specifically the matrix variate skew-t, generalized hyperbolic, variance-gamma, and NIG distributions.

, if its probability density function can be written as

is the modified Bessel function of the third kind with index λ. Expectations of some functions of a GIG random variable have a mathematically tractable form, e.g.:

where ω=√ab and η=√a/b, is used when deriving the generalized hyperbolic distribution (see Browne & McNicholas 2015). For notational clarity, we will denote the parameterization given in (5) by I(ω,η,λ).

is the vectorization of

where M and A are n×p matrices representing the location and skewness, respectively, V∼Nn×p(0,Σ,Ψ), and W>0 is a random variable with density h(w|θ). Gallaugher & McNicholas (2017), show that the matrix variate skew-t distribution, with νdegrees of freedom, arises from (7) with WST∼IGamma(ν/2,ν/2), where IGamma(⋅) denotes the inverse-gamma distribution with density

In Gallaugher & McNicholas (2019), one of the distributions considered is a matrix variate generalized hyperbolic distribution. This again arises from (7) with WGH∼I(ω,1,λ). This distribution will be denoted by MVGH(M,A,Σ,Ψ,λ,ω), and the density is

The matrix variate variance-gamma distribution, also derived in Gallaugher & McNicholas (2019) and denoted MVVG(M,A,Σ,Ψ,γ), arises from (7) with WVG∼gamma(γ,γ), where gamma(⋅) denotes the gamma distribution with density

for y>0 and a,b∈R+ The density of the random matrix X with this distribution is

Readers who may benefit from the context provided by the mixture of factor analyzers model should consult the appendix. Xie et al. (2008) and Yu et al. (2008) consider a matrix variate extension of probabilistic principal components analysis (PPCA) and assumes an n×p random matrix X can be written

where M is an n×p location matrix, Λ is an n×q matrix of column factor loadings, Δ is a p×r matrix of row factor loadings, U∼Nq×r(0,Iq,Ir), and E∼Nn×p(0,σ2In,σ2Ip). It is assumed that U and E are independent of each other. The main disadvantage of this model is that, in general, X does not follow a matrix variate normal distribution.

Zhao et al. (2012) present bilinear probabilistic principal component analysis (BPPCA) which extends (8) by adding two projected error terms. The resulting model assumes X can be written X=M+ΛUΔ′+ΛEB+EAΔ′+E, where U is the same as in (8), EB∼Nq×p(0,Iq,σBIp), EA∼Nn×r(0,σAIn,Ir). In this model, it is assumed that U,EB,EA, and E are all independent of each other. Gallaugher & McNicholas (2018b) further extend this to matrix variate factor analysis and consider a mixture of matrix variate bilinear factor analyzers (MMVBFA) model. For MMVBFA, Gallaugher & McNicholas (2018b) altered BPPCA by removing the isotropic constraints so that EB∼Nq×p(0,Iq,Ψ), EA∼Nn×r(0,Σ,Ir) and E∼Nn×p(0,Σ,Ψ), where Σ=diag{σ1,σ2,…,σn}, with σi>0, and Ψ=diag{ψ1,ψ2,…,ψp}, with ψi>0. With these slight modifications, it can be shown that X∼Nn×p(M,ΛΛ′+Σ,ΔΔ′+Ψ), similarly to its multivariate counterpart (Appendix A).

with probability πg for g∈{1,2,…,G}, πg>0, ∑Gi=1πg=1, where Mg is the location of the gth component, Ag is the skewness, and Wig is a random variable with the density h(wig|θg). This will be dependent on the distribution in question, i.e., skew-t, generalized hyperbolic, variance-gamma or NIG. Assume also that Vig can be written as

Note that Uig,EBig,EAig and Eig are all independently distributed and independent of each other.

To facilitate clustering, introduce the indicator zig, where zig=1 if observation i belongs to group g, and zig=0 otherwise. Then, it can be shown that

As in the matrix variate normal case, this model has a two stage interpretation given by

which will be useful for parameter estimation.

Suppose we observe the N n×p matrices X1,X2,…,XN distributed according to one of the four distributions. We assume that this data is incomplete and employ an alternating expectation conditional maximization (AECM) algorithm (Meng & van Dyk 1997). This algorithm is now described after inititalization.

The complete-data in the first stage consists of the observed data Xi, the latent variables Wi=(Wi1,Wi2,…,WiG)′ and the unknown group labels zi=(zi1,zi2,…,ziG)′ for i=1,2,…,N. In this case, the complete-data log-likelihood is

where Σ∗g=Σg+ΛgΛ′g, Ψ∗g=Ψg+ΔgΔ′g and C is constant with respect to the parameters.

In the E-step, we calculate the following conditional expectations:

As usual, all expectations are conditional on current parameter estimates; however, to avoid cluttered notation, we do not use iteration-specific notation. Although these expectations are dependent on the distribution in question, it can be shown that

Therefore, the exact updates are obtained by using the expectations given in (2)–(4) for appropriate values of λ,a, and b.

The update for θg is dependent on the distribution and are identical to those given in Gallaugher & McNicholas (2018a).

In the second stage, the complete-data consists of the observed data Xi, the latent variables Wi, the unknown group labels zi and the latent matrices YBi=(YBi1,YBi2,…,YBiG) for i=1,2,…,N. The complete-data log-likelihood in this stage is

In the E-step, it can be shown that

and so we can calculate the expectations

In the M-step, the updates for Λg and Σg are calculated. These updates are given by

In the third stage, the complete-data consists of the observed data Xi, the latent variables Wi, the labels zi and the latent matrices YAi=(YAi1,YAi2,…,YAiG) for i=1,2,…,N.