In this note, we show the mixing of three-term progressions (x, xg, xg^2) in every finite quasirandom groups, fully answering a question of Gowers. More precisely, we show that for any D-quasirandom group G and any three sets A_1, A_2, A_3 ⊂ G, we have |_x,y∼ G[ x ∈ A_1, xy ∈ A_2, xy^2 ∈ A_3] - ∏_i=1^3 _x∼ G[x ∈ A_i] | ≤(2/√(D))^1/4. Prior to this, Tao answered this question when the underlying quasirandom group is SL_d(𝔽_q). Subsequently, Peluse extended the result to all nonabelian finite simple groups. In this work, we show that a slight modification of Peluse's argument is sufficient to fully resolve Gower's quasirandom conjecture for 3-term progressions. Surprisingly, unlike the proofs of Tao and Peluse, our proof is elementary and only uses basic facts from nonabelian Fourier analysis. 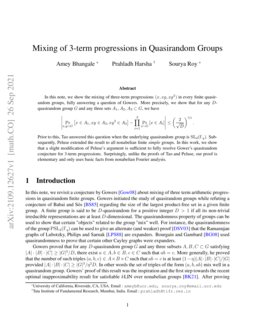 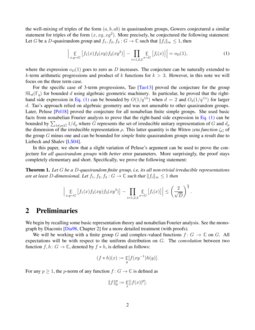 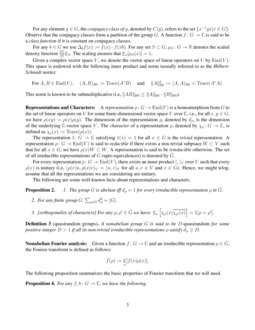 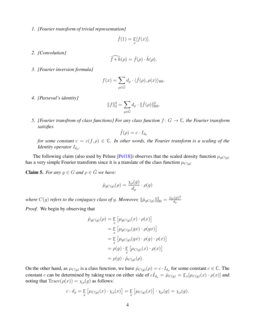 The purpose of this paper is to investigate the finite Frobenius groups ...
James McCarron, et al. ∙

We introduce orbital graphs and discuss some of their basic properties. ...
Paula Hähndel, et al. ∙

On some batch code properties of the simplex code

A sofic approximation to a countable group is a sequence of partial acti...
Dylan Airey, et al. ∙

In this note, we revisit a conjecture by Gowers [Gowers2008] about mixing of three term arithmetic progressions in quasirandom finite groups. Gowers initiated the study of quasirandom groups while refuting a conjecture of Babai and Sós [BabaiS1985] regarding the size of the largest product-free set in a given finite group. A finite group is said to be D-quasirandom for a positive integer D>1 if all its non-trivial irreducible representations are at least D-dimensional. The quasirandomness property of groups can be used to show that certain "objects" related to the group "mix" well. For instance, the quasirandomness of the group PSL2(Fq) can be used to give an alternate (and weaker) proof [DavidoffSV-ramanujan] that the Ramanujan graphs of Lubotzky, Philips and Sarnak [LubotzkyPS1988] are expanders. Bourgain and Gambard [BourgainG2008] used quasirandomness to prove that certain other Cayley graphs were expanders.

where the expression oD(1) goes to zero as D increases. The conjecture can be naturally extended to k-term arithmetic progressions and product of k functions for k>3. However, in this note we will focus on the three term case.

For the specific case of 3-term progressions, Tao [Tao2013] proved the conjecture for the group SLd(Fq) for bounded d using algebraic geometric machinery. In particular, he proved that the right-hand side expression in Eq. 1 can be bounded by O(1/q\nicefrac18) when d=2 and Od(1/q\nicefrac14) for larger d. Tao’s approach relied on algebraic geometry and was not amenable to other quasirandom groups. Later, Peluse [Peluse2018] proved the conjecture for all nonabelian finite simple groups. She used basic facts from nonabelian Fourier analysis to prove that the right-hand side expression in Eq. 1 can be bounded by ∑1≠ρ∈^G1/dρ where ^G represents the set of irreducible unitary representation of G and dρ the dimension of the irreducible representation ρ. This latter quantity is the Witten zeta function ζG of the group G minus one and can be bounded for simple finite quasirandom groups using a result due to Liebeck and Shalev [LiebeckS2004].

In this paper, we show that a slight variation of Peluse’s argument can be used to prove the conjecture for all quasirandom groups with better error parameters. More surprisingly, the proof stays completely elementary and short. Specifically, we prove the following statement:

Let G be a D-quasirandom finite group, i.e, its all non-trivial irreducible representations are at least D-dimensional. Let f1,f2,f3:G→C such that ∥fi∥∞≤1 then

We begin by recalling some basic representation theory and nonabelian Fourier analysis. See the monograph by Diaconis [Diaconis1998, Chapter 2] for a more detailed treatment (with proofs).

We will be working with a finite group G and complex-valued functions f:G→C on G

. All expectations will be with respect to the uniform distribution on

G. The convolution between two function f,h:G→C, denoted by f∗h, is defined as follows:

For any p≥1, the p-norm of any function f:G→C is defined as

Given a complex vector space

V, we denote the vector space of linear operators on V by End(V). This space is endowed with the following inner product and norm (usually referred to as the Hilbert-Schmidt norm):

For every representation ρ:G→End(V), there exists an inner product ⟨,⟩V over V such that every ρ(x) is unitary (i.e, ⟨ρ(x)u,ρ(x)v⟩V=⟨u,v⟩V for all u,v∈V and x∈G). Hence, we might wlog. assume that all the representations we are considering are unitary.

The following are some well-known facts about representations and characters.

A nonabelian group G is said to be D-quasirandom for some positive integer D>1 if all its non-trivial irreducible representations ρ satisfy dρ≥D.

, the Fourier transform is defined as follows:

The following proposition summarizes the basic properties of Fourier transform that we will need.

For any f,h:G→C, we have the following

where C(g) refers to the conjugacy class of g. Moreover, ∥^μgC(g)∥2HS=|χρ(g)|2dρ

We begin by observing that

On the other hand, as μC(g) is a class function, we have ^μC(g)(ρ)=c⋅Idρ for some constant c∈C. The constant c can be determined by taking trace on either side of c˙Idρ=^μC(g)=Ex[μC(g)(x)⋅ρ(x)] and noting that Trace(ρ(x))=χρ(g) as follows:

The key property of D-quasirandom groups that we will be using is the following inequality due to Babai, Nikolov and Pyber, the proof of which we provide for the sake of completeness.

If G is a D-quasirandom group and f1,f2:G→C such that either f1 or f2 is mean zero then

The following is a simple corrollary of Lemma 6.

Let us denote the expression on the L.H.S. as Γ. We use simple manipulations and previously stated facts to simplify the expression.

Now using the fact that gbg−1 is uniformly distributed in G for a fixed g and a uniformly random b in G, we can simply the above expression as follows.

Finally, we use the fact that all the terms in the summation are non-negative and the group G is a D-quasirandom group.

The proof of this lemma is similar to the proof of the BNP inequality (Lemma 6). The key difference being that we have a complete characterization of the Fourier transform of μgC(g) from creftype 5 which we use to give a sharper bound. ∎

We are now ready to prove the main creftype 1. This part of the proof is similar to the corresponding expression that appears in the paper of Peluse [Peluse2018], which is in turn inspired by Tao’s adaptation of Gowers’ repeated Cauchy-Schwarzing trick to the nonebelian setting. We, however, present the entire proof for the sake of completeness.