As the use of natural language processing increases in our day-to-day life, the need to address gender bias inherent in these systems also amplifies. This is because the inherent bias interferes with the semantic structure of the output of these systems while performing tasks like machine translation. While research is being done in English to quantify and mitigate bias, debiasing methods in Indic Languages are either relatively nascent or absent for some Indic languages altogether. Most Indic languages are gendered, i.e., each noun is assigned a gender according to each language's grammar rules. As a consequence, evaluation differs from what is done in English. This paper evaluates the gender stereotypes in Hindi and Marathi languages. The methodologies will differ from the ones in the English language because there are masculine and feminine counterparts in the case of some words. We create a dataset of neutral and gendered occupation words, emotion words and measure bias with the help of Embedding Coherence Test (ECT) and Relative Norm Distance (RND). We also attempt to mitigate this bias from the embeddings. Experiments show that our proposed debiasing techniques reduce gender bias in these languages. 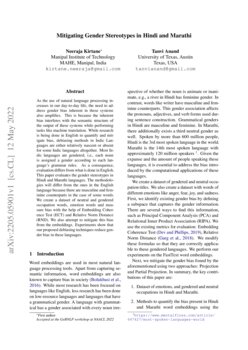 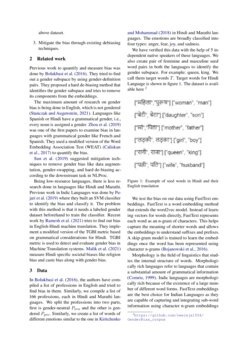 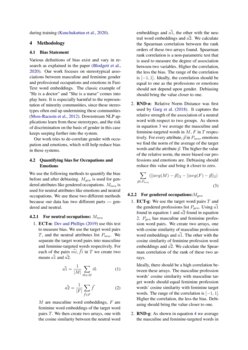 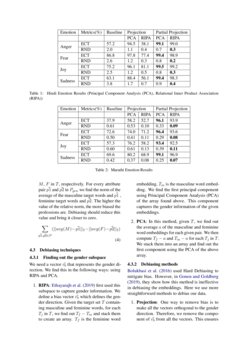 The gender bias present in the data on which language models are pre-tra...
Neeraja Kirtane, et al. ∙

Ousiometrics and Telegnomics: The essence of meaning conforms to a two-dimensional powerful-weak and dangerous-safe framework with diverse corpora presenting a safety bias

We define `ousiometrics' to be the study of essential meaning in whateve...
P. S. Dodds, et al. ∙

With language models being deployed increasingly in the real world, it i...
Gauri Gupta, et al. ∙

Gender stereotypes are manifest in most of the world's languages and are...
Ran Zmigrod, et al. ∙

Word embeddings are used in most natural language processing tools. Apart from capturing semantic information, word embeddings are also known to capture bias in society (Bolukbasi et al., 2016). While most research has been focused on languages like English, less research has been done on low-resource languages and languages that have a grammatical gender. A language with grammatical has a gender associated with every noun irrespective of whether the noun is animate or inanimate, e.g., a river in Hindi has feminine gender. In contrast, words like writer have masculine and feminine counterparts. This gender association affects the pronouns, adjectives, and verb forms used during sentence construction. Grammatical genders in Hindi are masculine and feminine. In Marathi, there additionally exists a third neutral gender as well. Spoken by more than 600 million people, Hindi is the 3rd most spoken language in the world. Marathi is the 14th most spoken language with approximately 120 million speakers 111https://www.mentalfloss.com/article/647427/most-spoken-languages-world. Given the expanse and the amount of people speaking these languages, it is essential to address the bias introduced by the computational applications of these languages.

We create a dataset of gendered and neutral occupation titles. We also create a dataset with words of different emotions like anger, fear, joy, and sadness. First, we identify existing gender bias by defining a subspace that captures the gender information. There are several ways to find this information, such as Principal Component Analysis (PCA) and Relational Inner Product Association (RIPA). We use the existing metrics for evaluation: Embedding Coherence Test

(Dev and Phillips, 2019), Relative Norm Distance (Garg et al., 2018). We modify these formulas so that they are correctly applicable to these gendered languages. We perform our experiments on the FastText word embeddings.

Next, we mitigate the gender bias found by the aforementioned using two approaches: Projection and Partial Projection. In summary, the key contributions of this paper are:

Previous work to quantify and measure bias was done by Bolukbasi et al. (2016). They tried to find out a gender subspace by using gender-definition pairs. They proposed a hard de-biasing method that identifies the gender subspace and tries to remove its components from the embeddings.

The maximum amount of research on gender bias is being done in English, which is not gendered (Stanczak and Augenstein, 2021). Languages like Spanish or Hindi have a grammatical gender, i.e., every noun is assigned a gender. Zhou et al. (2019) was one of the first papers to examine bias in languages with grammatical gender like French and Spanish. They used a modified version of the Word Embedding Association Test (WEAT) (Caliskan et al., 2017) to quantify the bias.

Being low-resource languages, there is less research done in languages like Hindi and Marathi. Previous work in Indic Languages was done by Pujari et al. (2019)

where they built an SVM classifier to identify the bias and classify it. The problem with this method is that it needs a labeled gender dataset beforehand to train the classifier. Recent work by

Ramesh et al. (2021) tries to find out bias in English-Hindi machine translation. They implement a modified version of the TGBI metric based on grammatical considerations for Hindi. TGBI metric is used to detect and evaluate gender bias in Machine Translation systems. Malik et al. (2021) measure Hindi specific societal biases like religion bias and caste bias along with gender bias.

In Bolukbasi et al. (2016), the authors have compiled a list of professions in English and tried to find bias in them. Similarly, we compile a list of 166 professions, each in Hindi and Marathi languages. We split the professions into two parts, first is gender-neutral Pneu and the other is gendered Pgen. Similarly, we create a list of words of different emotions similar to the one in Kiritchenko and Mohammad (2018) in Hindi and Marathi languages. The emotions are broadly classified into four types: anger, fear, joy, and sadness.

We have verified this data with the help of 5 independent native speakers of these languages. We also create pair of feminine and masculine seed word pairs in both the languages to identify the gender subspace. For example: queen, king. We call them target words T. Target words for Hindi Language is shown in figure 1. The dataset is available here 222https://github.com/neeraja1504/GenderBias_corpus

We test the bias on our data using FastText embeddings. FastText is a word embedding method that extends the word2vec model. Instead of learning vectors for words directly, FastText represents each word as an n-gram of characters. This helps capture the meaning of shorter words and allows the embeddings to understand suffixes and prefixes. A skip-gram model is trained to learn the embeddings once the word has been represented using character n-grams

Morphology is the field of linguistics that studies the internal structure of words. Morphologically rich languages refer to languages that contain a substantial amount of grammatical information (Comrie, 1999). Indic languages are morphologically rich because of the existence of a large number of different word forms. FastText embeddings are the best choice for Indian Languages as they are capable of capturing and integrating sub-word information using character n-gram embeddings during training (Kunchukuttan et al., 2020).

Various definitions of bias exist and vary in research as explained in the paper (Blodgett et al., 2020). Our work focuses on stereotypical associations between masculine and feminine gender and professional occupations and emotions in FastText word embeddings. The classic example of "He is a doctor" and "She is a nurse" comes into play here. It is especially harmful to the representation of minority communities, since these stereotypes often end up undermining these communities (Moss-Racusin et al., 2012). Downstream NLP applications learn from these stereotypes, and the risk of discrimination on the basis of gender in this case keeps seeping further into the system.

Our work tries to de-correlate gender with occupation and emotions, which will help reduce bias in these systems.

4.2 Quantifying bias for Occupations and Emotions

4.3.1 Finding out the gender subspace

We need a vector →vb that represents the gender direction. We find this in the following ways: using RIPA and PCA.

Bolukbasi et al. (2016) used Hard Debiasing to mitigate bias. However, in Gonen and Goldberg (2019), they show how this method is ineffective in debiasing the embeddings. Here we use more straightforward methods to debias our data.

Table 1 and 2 show results for the emotions in Hindi and Marathi respectively. We observe that anger is the most biased in both languages according to the ECT metric as it has the lowest value. Amongst the debiasing techniques, we see that partial projection with RIPA works the best for the ECT metric and partial projection with PCA works the best for the RND metric.

However, we observe some anomalies in the results when projection debiasing method is used. We hypothesize that completely removing the gender information changes some vectors, which are masculine or feminine, by the grammatical definition of the gender. For example, words like king, grandfather and boy which are masculine by the grammatical definition of gender should preserve their gender information. Hence we note that partial projection performs the best because it has a gender component to it.

Future work could include trying out these techniques on downstream tasks and checking the performance before and after debiasing. The main problem with experimenting on downstream tasks is the availability of datasets in these languages. We would also like to experiment with debiasing contextual embeddings and large language models. Apart from that we would also like to address other types of bias like religion, social and cultural, which are particularly inherent in Hindi and Marathi.