Significant attention has been given to minimizing a penalized least squares criterion for estimating sparse solutions to large linear systems of equations. The penalty is responsible for inducing sparsity and the natural choice is the so-called l_0 norm. In this paper we develop a Momentumized Iterative Shrinkage Thresholding (MIST) algorithm for minimizing the resulting non-convex criterion and prove its convergence to a local minimizer. Simulations on large data sets show superior performance of the proposed method to other methods. 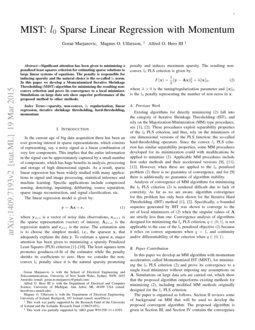 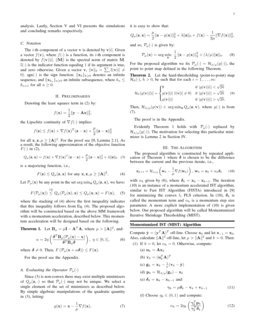 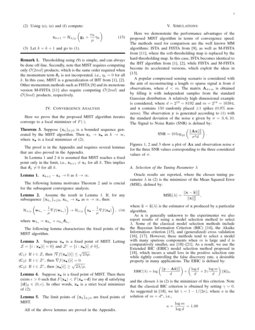 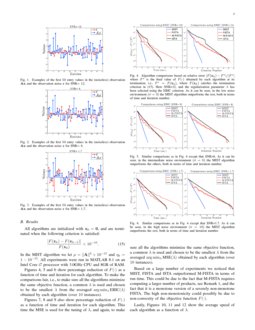 In the current age of big data acquisition there has been an ever growing interest in sparse representations, which consists of representing, say, a noisy signal as a linear combination of very few components. This implies that the entire information in the signal can be approximately captured by a small number of components, which has huge benefits in analysis, processing and storage of high dimensional signals. As a result, sparse linear regression has been widely studied with many applications in signal and image processing, statistical inference and machine learning. Specific applications include compressed sensing, denoising, inpainting, deblurring, source separation, sparse image reconstruction, and signal classification, etc.

The linear regression model is given by:

is a vector of noisy data observations,

xm×1 is the sparse representation (vector) of interest, Ad×m is the regression matrix and ϵd×1 is the noise. The estimation aim is to choose the simplest model, i.e., the sparsest x, that adequately explains the data y. To estimate a sparse x, major attention has been given to minimizing a sparsity Penalized Least Squares (PLS) criterion [1, 2, 3, 4, 5, 6, 7, 8, 9, 10]. The least squares term promotes goodness-of-fit of the estimator while the penalty shrinks its coefficients to zero. Here we consider the non-convex l0 penalty since it is the natural sparsity promoting penalty and induces maximum sparsity. The resulting non-convex l0 PLS criterion is given by:

where λ>0 is the tuning/regularization parameter and ∥x∥0 is the l0 penalty representing the number of non-zeros in x.

Existing algorithms for directly minimizing (2) fall into the category of Iterative Shrinkage Thresholding (IST), and rely on the Majorization-Minimization (MM) type procedures, see [1, 2]. These procedures exploit separability properties of the l0 PLS criterion, and thus, rely on the minimizers of one dimensional versions of the PLS function: the so-called hard-thresholding operators. Since the convex l1 PLS criterion has similar separability properties, some MM procedures developed for its minimization could with modifications be applied to minimize (2). Applicable MM procedures include first order methods and their accelerated versions [9, 11, 12]. However, when these are applied to the l0 penalized problem (2) there is no guarantee of convergence, and for [9] there is additionally no guarantee of algorithm stability.

Analysis of convergence of MM algorithms for minimizing the l0 PLS criterion (2) is rendered difficult due to lack of convexity. As far as we are aware, algorithm convergence for this problem has only been shown for the Iterative Hard Thresholding (IHT) method [1, 2]. Specifically, a bounded sequence generated by IHT was shown to converge to the set of local minimizers of (2

) when the singular values of

A are strictly less than one. Convergence analysis of algorithms designed for minimizing the lq PLS criterion, q∈(0,1], is not applicable to the case of the l0 penalized objective (2) because it relies on convex arguments when q=1, and continuity and/or differentiability of the criterion when q∈(0,1).

In this paper we develop an MM algorithm with momentum acceleration, called Momentumized IST (MIST), for minimizing the l0 PLS criterion (2) and prove its convergence to a single local minimizer without imposing any assumptions on A. Simulations on large data sets are carried out, which show that the proposed algorithm outperforms existing methods for minimizing (2), including modified MM methods originally designed for the l1 PLS criterion.

The paper is organised as follows. Section II reviews some of background on MM that will be used to develop the proposed convergent algorithm. The proposed algorithm is given in Section III, and Section IV contains the convergence analysis. Lastly, Section V and VI presents the simulations and concluding remarks respectively.

The i-th component of a vector v is denoted by v[i]. Given a vector f(v), where f(⋅) is a function, its i-th component is denoted by f(v)[i]. ∥M∥ is the spectral norm of matrix M. I(⋅) is the indicator function equaling 1 if its argument is true, and zero otherwise. Given a vector v, ∥v∥0=∑iI(v[i]≠0). sgn(⋅) is the sign function. {xk}k≥0 denotes an infinite sequence, and {xkn}n≥0 an infinite subsequence, where kn≤kn+1 for all n≥0.

Denoting the least squares term in (2) by:

the Lipschitz continuity of ∇f(⋅) implies:

is a majorizing function, i.e.,

Let Pμ(x) be any point in the set argminzQμ(z,x), we have:

For the proof see the Appendix.

Since (3) is non-convex there may exist multiple minimizers of Qμ(z,⋅) so that Pμ(⋅) may not be unique. We select a single element of the set of minimizers as described below. By simple algebraic manipulations of the quadratic quantity in (3), letting:

it is easy to show that:

For the proposed algorithm we fix Pμ(⋅)=Hλ/μ(g(⋅)), the point to point map defined in the following Theorem.

The proof is in the Appendix.

Evidently Theorem 1 holds with Pμ(⋅) replaced by Hλ/μ(g(⋅)). The motivation for selecting this particular minimizer is Lemma 2 in Section IV.

The proposed algorithm is constructed by repeated application of Theorem 1 where δ is chosen to be the difference between the current and the previous iterate, i.e.,

with αk given by (6), where δk=xk−xk−1. The iteration (10) is an instance of a momentum accelerated IST algorithm, similar to Fast IST Algorithm (FISTA) introduced in [9] for minimizing the convex l1 PLS criterion. In (10), δk is called the momentum term and αk is a momentum step size parameter. A more explicit implementation of (10) is given below. Our proposed algorithm will be called Momentumized Iterative Shrinkage Thresholding (MIST).

Thresholding using (9) is simple, and can always be done off-line. Secondly, note that MIST requires computing only O(2md) products, which is the same order required when the momentum term δk is not incorporated, i.e., ηk=0 for all k. In this case, MIST is a generalization of IHT from [1, 2]. Other momentum methods such as FISTA [9] and its monotone version M-FISTA [11] also require computing O(2md) and O(3md) products, respectively.

Here we prove that the proposed MIST algorithm iterates converge to a local minimizer of F(⋅).

Suppose {xk}k≥0 is a bounded sequence generated by the MIST algorithm. Then xk→x∙ as k→∞, where x∙ is a local minimizer of (2).

In Lemma 1 and 2 it is assumed that MIST reaches a fixed point only in the limit, i.e., xk+1≠xk for all k. This implies that δk≠0 for all k.

The following lemma motivates Theorem 2 and is crucial for the subsequent convergence analysis.

The following lemma characterizes the fixed points of the MIST algorithm.

Suppose x∙ is a fixed point of MIST. Then there exists ϵ>0 such that F(x∙)<F(x∙+d) for any d satisfying ∥d∥2∈(0,ϵ). In other words, x∙ is a strict local minimizer of (2).

The limit points of {xk}k≥0 are fixed points of MIST.

All of the above lemmas are proved in the Appendix.

Here we demonstrate the performance advantages of the proposed MIST algorithm in terms of convergence speed. The methods used for comparison are the well known MM algorithms: ISTA and FISTA from [9], as well as M-FISTA from [11], where the soft-thresholding map is replaced by the hard-thresholding map. In this case, ISTA becomes identical to the IHT algorithm from [1, 2], while FISTA and M-FISTA become its accelerated versions, which exploit the ideas in [13].

A popular compressed sensing scenario is considered with the aim of reconstructing a length m sparse signal x from d observations, where d<m. The matrix Ad×m

is obtained by filling it with independent samples from the standard Gaussian distribution. A relatively high dimensional example is considered, where

) with the standard deviation of the noise

Figures 3, 3 and 3 show a plot of Ax and observation noise ϵ for the three SNR values corresponding to the three considered values of σ.

Oracle results are reported, where the chosen tuning parameter λ in (2) is the minimizer of the Mean Squared Error (MSE), defined by:

where ˆx=ˆx(λ) is the estimator of x produced by a particular algorithm.

As x is generally unknown to the experimenter we also report results of using a model selection method to select λ. Some of the classical model selection methods include the Bayesian Information Criterion (BIC) [14], the Akaike Information criterion [15], and (generalized) cross validation [16, 17]. However, these methods tend to select a model with many spurious components when m is large and d is comparatively smaller, see [18, 19, 20, 21]. As a result, we use the Extended BIC (EBIC) model selection method proposed in [18], which incurs a small loss in the positive selection rate while tightly controlling the false discovery rate, a desirable property in many applications. The EBIC is defined by:

All algorithms are initialized with x0=0, and are terminated when the following criterion is satisfied:

Figures 6, 6 and 6 show percentage reduction of F(⋅) as a function of time and iteration for each algorithm. To make the comparisons fair, i.e., to make sure all the algorithms minimize the same objective function, a common λ is used and chosen to be the smallest λ from the averaged argminλEBIC(λ) obtained by each algorithm (over 10 instances).

Figures 9, 9 and 9 also show percentage reduction of F(⋅) as a function of time and iteration for each algorithm. This time the MSE is used for the tuning of λ, and again, to make sure all the algorithms minimize the same objective function, a common λ is used and chosen to be the smallest λ from the averaged argminλMSE(λ) obtained by each algorithm (over 10 instances).

Based on a large number of experiments we noticed that MIST, FISTA and ISTA outperformed M-FISTA in terms of run time. This could be due to the fact that M-FISTA requires computing a larger number of products, see Remark 1, and the fact that it is a monotone version of a severely non-monotone FISTA. The high non-monotonicity could possibly be due to non-convexity of the objective function F(⋅).

Lastly, Figures 12, 12 and 12 show the average speed of each algorithm as a function of λ.

We have developed a momentum accelerated MM algorithm, MIST, for minimizing the l0 penalized least squares criterion for linear regression problems. We have proved that MIST converges to a local minimizer without imposing any assumptions on the regression matrix A. Simulations on large data sets were carried out for different SNR values, and have shown that the MIST algorithm outperforms other popular MM algorithms in terms of time and iteration number.

Proof of Theorem 1: Let w=x+βδ. The quantities f(w), ∇f(w)T(z−w) and ∥z−w∥22 are quadratic functions, and by simple linear algebra they can easily be expanded in terms of z, x and δ. Namely,

Using the above expansions and the definition of Qμ(⋅,⋅), we have that:

which holds for any z. So, letting z=Pμ(x) implies:

Proof of Theorem 2: Looking at (8) it is obvious that:

which easily follows from basic linear algebra, (24) and (25) together imply that:

is the smallest eigenvalue of

Consider an arbitrary component of ukn, say, ukn[i], in which case we must have ukn[i]→u∙[i]. Without loss of generality, assume u∙[i]>0. Then, by the definition of Hλ/μ(⋅), there are two scenarios to consider:

Hλ/μ(ukn)[i] must approach either 0 or √2λ/μ. In other words, there has to exist a large enough n=N such that u∙[i] is approached either only from the left or the right for all n>N, i.e.,

Since i is arbitrary, the proof is complete. ∎

Proof of Lemma 3: The fixed points are obviously obtained by setting xk+1=xk=xk−1=x∙. So, any fixed point x∙ satisfies the equation:

The result is established by using the definition of Hλ/μ(g(⋅)) in Theorem 2. Namely, if i∈Z we easily obtain:

which reduces to C1. If i∈Zc, we easily obtain:

which reduces to C2. However, since:

The second inequality in the above is due to C1 in Lemma 3.

Proof of Lemma 5: Since it is assumed that {xk}k≥0 is bounded, the sequence {(xk,xk+1)}k≥0 is also bounded, and thus, has at least one limit point. Denoting one of these by (<span class="mjx-char MJXc-TeX-main-B" style="padding-top: 0.151em; padding-bottom: