Computer-Assisted Pronunciation Training (CAPT) plays an important role in language learning. However, conventional CAPT methods cannot effectively use non-native utterances for supervised training because the ground truth pronunciation needs expensive annotation. Meanwhile, certain undefined nonnative phonemes cannot be correctly classified into standard phonemes. To solve these problems, we use the vector-quantized variational autoencoder (VQ-VAE) to encode the speech into discrete acoustic units in a self-supervised manner. Based on these units, we propose a novel method that integrates both discriminative and generative models. The proposed method can detect mispronunciation and generate the correct pronunciation at the same time. Experiments on the L2-Arctic dataset show that the detection F1 score is improved by 9.58 proposed method also achieves a comparable word error rate (WER) and the best style preservation for mispronunciation correction compared with text-to-speech (TTS) methods. 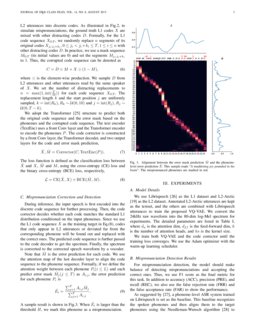 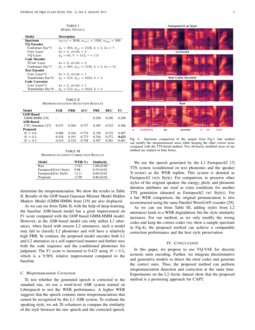 Computer-Assisted Pronunciation Training (CAPT) is an important technology to offer a flexible education service for the second language (L2) learners. In the pronunciation training process, the learner is asked to read a pre-defined text, and the CAPT system should detect mispronunciations of the speech and give the proper feedback. The common approach for CAPT is to compare the pronounced speech with the standard pronunciation distribution. If the deviation is too large, this pronunciation is judged as an error.

On the one hand, directly comparing with the standard speech can be an intuitive idea for the mispronunciation detection task. For example, [8, 9, 7]

align the student utterance with the teacher utterance via Dynamic Time Warping (DTW). Misalignment extracted from the DTW path is used to detect the mispronunciation. However, such methods have two main shortcomings. First, teacher utterances are expensive to prepare. However, with the quick development of deep learning, text-to-speech (TTS) technologies

can be applied to generate the teacher utterances. Nevertheless, how to make the generated speech more suitable for alignment and mispronunciation detection remains to be explored. Second, the feature for alignment needs to be invariant of the speaking style. Otherwise, the alignment may fail. Thus, on the other hand, to extract content-related and style-invariant features, other methods choose to use the feature extracted by an automatic speech recognition (ASR) model. Note that the ASR model is trained on utterances collected from native (L1) speakers. Thus, these methods in fact compare the input speech to the learned knowledge of standard pronunciation. For example, the goodness-of-pronunciation (GOP)

[27, 25, 28] to simplify the workflow. However, it is hard for these ASR-based methods to train on L2 utterances. First, to utilize L2 utterances, the text annotations must be the phonemes pronounced by the speaker rather than the phonemes of the pre-defined text. Such annotations are expensive to obtain. Second, generally, ASR-based methods only use the standard phonemes (for example, the 44 phonemes in English) for recognition and comparison. However, as analyzed in [2, 19], English learners from different language backgrounds may show acoustic characteristics similar to their mother tongues. Thus, L2 utterances may include undefined phonemes (we call them L2 phonemes in this paper) and cannot be properly classified into the standard phonemes.

To solve the aforementioned limitations, we propose to encode both L1 and L2 utterances into discrete acoustic units (we refer to this unit as “code” in the following discussion for simplicity) using the vector-quantized variational autoencoder (VQ-VAE)[20, 21]. This training process is self-supervised so that the L2 acoustic feature can be properly modeled without expensive annotations. Next, we utilize the encoded L1 code sequence and other distracting code sequences to simulate the mispronunciation and train a correction model that can discriminate the error codes and revise them to the correct ones considering the pre-defined text. By decoding the corrected code sequence, we can also obtain the corrected speech while keeping the style of the speaker. As analyzed by [26, 14, 4], if the teacher’s speech is more similar to the speaking style of the learner, the impact on pronunciation training will be more positive. Thus, the corrected speech can be powerful for education.

Our contributions can be summarized as follows.

We adopt VQ-VAE[21] for spectrum encoding as illustrated in Fig.1. The VQ encoder is constructed by Conformer[5] encoder layers, a time-domain down-sampling convolutional (Conv) layer, and a Gumbel-Softmax VQ layer[6, 12]. The raw waveform is first converted to the log-Mel spectrum s and goes through the Conformer encoder layers and the down-sampling layer for feature extraction,

Then, the VQ layer transforms the encoded feature z∈Rda (da

is the attention dim of the Conformer layer) to logit

is the number of codebooks) using a linear layer. The probability for choosing the

where τ is the Gumbel-Softmax temperature, dq is the dim of the codebook embedding, n=−log(−log(u)) and u is uniformly sampled from U(0,1). During the forward pass, the index of the chosen codebook eS is,

In the backward pass, the true gradient of the Gumbel-Softmax output is used.

The code decoder in Fig.1 uses a transposed convolutional (TConv) layer for the time-domain up-sampling, and uses Conformer decoder layers to recover the original spectrum from the encoded code embedding sequence. The code sequence is merged with the speaker information. We use X-vector[17] x extracted from the input spectrum as the speaker information,

On the one hand, the whole VQ-VAE must preserve information from the encoder to reconstruct the original spectrum. On the other hand, the VQ layer imposes an information bottleneck to force the encoder to discard non-essential details. As the style-related speaker information is directly offered to the decoder, the encoder will focus on extracting acoustic features that correlate more with the content.

We apply two loss functions to train the proposed VQ-VAE. First, to reconstruct the original spectrum

s, we apply the mean square error (MSE) loss between ^s and s. Second, to encourage the codebook usage, as inspired by [1], the diversity loss is also applied to increase the information entropy of pv. The final loss is defined as

where α is the weight of the diversity loss. We set α=0.1 in our experiments.

After the training of the proposed VQ-VAE converges, we freeze the model parameters and encode both L1 and L2 utterances into discrete codes. As illustrated in Fig.2, to simulate mispronunciations, the ground truth L1 codes X are mixed with other distracting codes D. Formally, for the L1 code sequence X0:T, we randomly replace n segments of its original codes Xji:ji+ki,0≤ji<ji+ki≤T,1≤i≤n with other distracting codes D. In practice, we use a mask sequence M0:T (its initial values are 0) and set the segments Mji:ji+ki to 1. Thus, the corrupted code sequence can be denoted as

where ⊙ is the element-wise production. We sample D from L2 utterances and other utterances read by the same speaker of X. We set the number of distracting replacements to n=max(1,int(T10)) for each code sequence X0:T. The replacement length k and the start position j are uniformly sampled, k=int(Rk),Rk∼U(0,10) and j=int(Rj),Rj∼U(0,T−k).

The loss function is defined as the classification loss between ^X and X, ^M and M, using the cross-entropy (CE) loss and the binary cross-entropy (BCE) loss, respectively,

During inference, the input speech is first encoded into the discrete code sequence for further processing. Then, the code corrector decides whether each code matches the standard L1 distribution conditioned on the input phonemes. Since we use the L1 code sequence X as the training target in Eq.(8), codes that only appear in L2 utterances or deviated far from the corresponding phoneme will be found out and replaced with the correct ones. The predicted code sequence is further passed to the code decoder to get the spectrum. Finally, the spectrum is converted to the corrected speech waveform by a vocoder.

A sample result is shown in Fig.3. When ^Ei is larger than the threshold H, we mark this phoneme as a mispronunciation.

We use Librispeech[13] as the L1 dataset and L2-Arctic[29] as the L2 dataset. Annotated L2-Arctic utterances are kept as the testset, and the others are combined with Librispeech utterances to train the proposed VQ-VAE. We convert the 24kHz raw waveform into the 80-dim log-Mel spectrum for experiments. The detailed parameters are listed in Table I, where da is the attention dim, dff is the feed-forward dim, h is the number of attention heads, and ks is the kernel size.

We train both VQ-VAE and the code corrector until the training loss converges. We use the Adam optimizer with the warm-up learning scheduler.

For mispronunciation detection, the model should make balance of detecting mispronunciations and accepting the correct ones. Thus, we use F1 score as the final metric for this task. In addition to accuracy (ACC), precision (PRE), and recall (REC), we also use the false rejection rate (FRR) and the false acceptance rate (FAR) to show the performance.

As suggested by [10], a phoneme-level ASR system trained on Librispeech is set as the baseline. This baseline recognizes the spoken phonemes and then aligns them to the target phonemes using the Needleman-Wunsch algorithm[18] to determine the mispronunciation. We show the results in Table II

As we can see from Table II, with the help of deep-learning, the baseline ASR-based model has a great improvement on F1 score compared with the GOP-based GMM-HMM model. However, as the ASR-based model can only utilize L1 utterances, when faced with unseen L2 utterances, such a model may fail to classify L2 phonemes and will have a relatively high FRR. In contrast, the proposed model encodes both L1 and L2 utterances in a self-supervised manner and further uses both the code sequence and the conditioned phonemes for judgment. The F1 score is increased to 0.423 using H=0.5, which is a 9.58% relative improvement compared to the baseline.

To test whether the generated speech is corrected to the standard one, we use a word-level ASR system trained on Librispeech to test the WER performance. A higher WER suggests that the speech contains more mispronunciations that cannot be recognized by this L1 ASR system. To evaluate the speaking style, we ask 20 volunteers to compare the similarity of the style between the raw speech and the corrected speech.

We use the speech generated by the L1 Fastspeech2[15] TTS system (conditioned on text phonemes and the speaker X-vector) as the WER topline. This system is denoted as Fastspeech2 (w/o Style). For comparison, to preserve other styles of the original speaker, the energy, pitch, and phoneme duration attributes are used as extra conditions for another TTS generation (denoted as Fastspeech2 (w/ Style)). For a fair WER comparison, the original pronunciation is also reconstructed using the same Parallel-WaveGAN vocoder[24].

As we can see from Table III, adding styles from L2 utterances leads to a WER degradation, but the style similarity increases. For our method, as we only modify the wrong codes and keep the correct codes (we show a sample spectrum in Fig.4), the proposed method can achieve a comparable correction performance and the best style preservation.

In this paper, we propose to use VQ-VAE for discrete acoustic units encoding. Further, we integrate discriminative and generative models to detect the error codes and generate the correct ones. Thus, the proposed method can perform mispronunciation detection and correction at the same time. Experiments on the L2-Arctic dataset show that the proposed method is a promising approach for CAPT.