Multichannel blind source separation aims to recover the latent sources from their multichannel mixture without priors. A state-of-art blind source separation method called independent low-rank matrix analysis (ILRMA) unified independent vector analysis (IVA) and nonnegative matrix factorization (NMF). However, speech spectra modeled by NMF may not find a compact representation and it may not guarantee that each source is identifiable. To address the problem, here we propose a modified blind source separation method that enhances the identifiability of the source model. It combines ILRMA with penalty item of volume constraint. The proposed method is optimized by standard majorization-minimization framework based multiplication updating rule, which ensures the stability of convergence. Experimental results demonstrate the effectiveness of the proposed method compared with AuxIVA, MNMF and ILRMA. 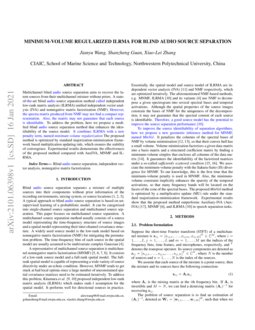 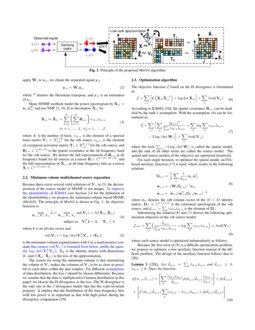 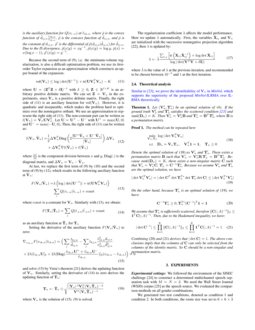 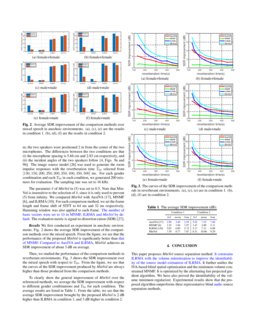 In this paper, we address a statistical model extension of multichannel ...
Keigo Kamo, et al. ∙

Blind audio source separation separates a mixture of multiple sources into their components without prior information of the recording environments, mixing system, or source locations [5, 4, 18]. A typical approach to blind audio

. It consists of a low-rank source model and a full-rank spatial model. The full-rank spatial model is capable of representing a wide variety of source directivity under an echoic condition. However, MNMF tends to get stuck at bad local optima since a large number of unconstrained spatial covariance matrices need to be estimated iteratively. To address this problem, Kitamura

et al. [15, 16] proposed independent low-rank matrix analysis (ILRMA) which makes rank-1 assumption for the spatial model. It performs well for directional sources in practice. Essentially, the spatial model and source model of ILRMA are independent vector analysis (IVA) [14] and NMF respectively, which are optimized iteratively. The aforementioned NMF-based methods, e.g. MNMF, ILRMA [16] and its variants [21] use NMF to decompose a given spectrogram into several spectral bases and temporal activations. Although the spatial properties of the source images constrain the bases of NMF for the uniqueness of the decomposition, it may not guarantee that the spectral content of each source is identifiable. Therefore, a good source model has the potential to improve the source separation performance [16].

To improve the source identifiability of separation algorithms, here we propose a new geometric inference method for MNMF, named MinVol. It penalizes the columns of the spectral bases of NMF by volume minimization [9, 12], so that their convex hull has a small volume. Volume minimization factorizes a given data matrix into a basis matrix and a structured coefficient matrix by finding a minimum-volume simplex that encloses all columns of the data matrix [10]. It guarantees the identifiability of the factorized matrices under a so-called sufficiently scattered condition [19, 11]. We associate the minimum-volume penalty with the Itakura-Saito (IS) divergence for MNMF. To our knowledge, this is the first time that the minimum-volume penalty is used in MNMF. Also, the minimum-volume constraint implicitly enhances the sparsity of the temporal activations, so that many frequency bands will be located on the facets of the cone of the spectral bases. The proposed MinVol method is optimized by a multiplicative update (MU) rule under the standard majorization-minimization framework. Experimental results show that the proposed method outperforms Auxiliary-IVA (AuxIVA) [22], MNMF [24], and ILRMA [16] in speech separation tasks.

We assume that each source of the mixture is a point source, then the mixture and its sources have the following connection:

where Ai is the mixing matrix at the ith frequency bin. If Ai is invertible and M=N, we can find a demixing matrix (Ai)−1 for recovering sij.

The problem of source separation is to find an estimation of (Ai)−1, denoted as Wi=[wi,1,…,wi,M]H, such that when we apply Wi to xij, we obtain the separated signal yij:

where H denotes the Hermitian transpose, and yij is an estimation of sij.

Many MNMF methods model the power spectrogram by Xij=xijxHij, and use NMF [23, 3, 24] to decompose Xij by:

at all frequency bands for all sources as a tensor

R∈CI×N×M×M, and the full representation of Xi,j at all time-frequency bins as a tensor X∈CI×J×M×M.

Because there exists several valid solutions of Vn in (3), the decomposition of the source model of MNMF is not unique. To improve the identifiability of ILRMA (see Section 2.4 for the definition of the identifiability), we propose the minimum-volume based MNMF (MinVol). The principle of MinVol is shown in Fig. 1. Its objective function is:

where 1 is an all-one vector and

is the minimum-volume regularization with δ as a small positive constant that ensures vol(Vn) is bounded from below, unlike the quantity log|det(VTnVn)|. IK

is the identity matrix with dimensions

K, and ℓ(Xij,^Xij) is the loss of the approximation.

The reason for using the minimum-volume is that minimizing the volume of Vn makes the columns of Vn to be as close as possible to each other within the unit simplex. For different assumptions of data distribution, the loss ℓ

should be chosen differently. Because we assume that the data is multiplicative Gamma distribution in this paper, we choose the IS divergence as the loss. The IS divergence is the only one in the

β divergence family that has the scale-invariant property. It implies that the distribution of the time-frequency bins with low power is as important as that with high power during the divergence computation [6].

The objective function L based on the IS divergence is formulated as:

According to ILRMA [16], the spatial covariance Ri,n can be modeled by the rank-1 assumption. With the assumption, (6) can be formulated as:

For each single iteration, to optimize the spatial model, an IVA-based auxiliary function [22] is used, which results in the following solution:

where em denotes the nth column vector of the M×M identity matrix, Dn∈CI×J×N is the estimated spectrogram of the nth source, and dij,n=∑kvik,ntkj,n is the element of Dn.

Substituting the solution (8) into (7) derives the following optimization objective of the nth source model:

where each source model is optimized independently as follows.

Because the second term of (9), i.e. the minimum-volume regularization, is also a difficult optimization problem, we use its first-order Taylor expansion as an approximation which constructs an upper bound of the expansion:

where [x][y] is the component division between x and y, Diag(⋅) is the diagonal matrix, and ΔVn=Vn−~Vn.

where const is a constant for Vn. Similarly with (13), we obtain:

as an auxiliary function at ~Tn for Tn

Setting the derivative of the auxiliary function F(Vn|~Vn) to zero:

The regularization coefficient λ affects the model performance. Here we update λ automatically. First, the variables ^Xij and Vn are initialized with the successive nonnegative projection algorithm [20], then λ is updated by:

where ^λ is the value of λ at the previous iteration, and recommended to be chosen between 10−3 and 1 at the first iteration.

Similar to [8], we prove the identifiability of Vn in MinVol, which supports the superiority of the proposed MinVol-ILRMA over ILRMA theoretically.

Let (V⋆n,T⋆n) be an optimal solution of (4). If the ground truth V♮n and T♮n satisfies the scattered condition [8] and rank(Dn)=K. Then V⋆n=V♮nB and T⋆n=BTT♮n, where B is a permutation matrix.

The method can be repeated here

On the other hand, because T′n is an optimal solution of (19), we have:

We assume that T⋆n is sufficiently scattered, therefore ∥C(:,k)−1∥2≤1TC(:,k)−1. Then, due to the Hadamard inequality, we have:

Combining (20) and (21) derives that |detC|=1. The above conclusions imply that the columns of C can only be selected from the columns of the identity matrix. So C should be a non-singular and permutation matrix.

Experimental settings: We followed the environment of the SISEC challenge [2] to construct a determined multichannel speech separation task with M=N=2. We used the Wall Street Journal (WSJ0) corpus [13] as the speech source. We evaluated the comparison methods on all gender combinations.

We generated two test conditions, denoted as condition 1 and condition 2. In both conditions, the room size was set to 6×6×3 m; the two speakers were positioned 2 m from the center of the two microphones. The differences between the two conditions are that (i) the microphone spacing is 5.66 cm and 2.83 cm respectively, and (ii) the incident angles of the two speakers follow [21, Figs. 9a and 9b]. The image source model [1] was used to generate the room impulse responses with the reverberation time T60 selected from [130,150,200,250,300,350,400,450,500] ms. For each gender combination and each T60 in each condition, we generated 200 mixtures for evaluation. The sampling rate was set to 16 kHz.

The parameter δ of MinVol in (5) was set to 0.5. Note that MinVol is insensitive to the selection of δ, since it is only used to prevent (5) from infinity. We compared MinVol with AuxIVA [22], MNMF [24], and ILRMA [16]. For each comparison method, we set the frame length and frame shift of STFT to 64 ms and 32 ms respectively. Hamming window was also applied to each frame. The number of basis vectors were set to 10 in MNMF, ILRMA and MinVol by default.

Results We first conducted an experiment in anechoic environments. Fig. 2 shows the average SDR improvement of the comparison methods over the mixed speech. From the figure, we see that the performance of the proposed MinVol is significantly better than that of MNMF. Compared to AuxIVA and ILRMA, MinVol achieves an SDR improvement of about 3 dB on average.

This paper proposes MinVol source separation method. It constrains ILRMA with the volume minimization to improve the identifiability of the source model estimation of ILRMA. It further unifies the IVA-based blind spatial optimization and the minimum-volume constrained MNMF. It is optimized by the alternating fast projected gradient algorithm. We have also proved the identifiability of the volume minimum regularizer. Experimental results show that the proposed algorithm outperforms three representative blind audio source separation methods.