We represent affine sub-manifolds of exponential family distributions as minimum relative entropy sub-manifolds. With such representation we derive analytical formulas for the inference from partial information on expectations and covariances of multivariate normal distributions; and we improve the numerical implementation via Monte Carlo simulations for the inference from partial information of generalized expectation type. 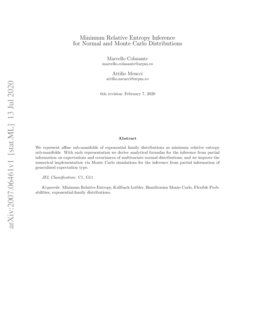 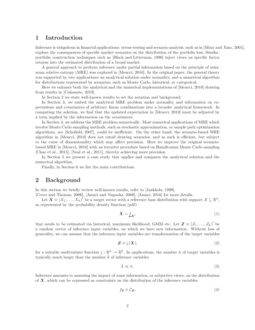 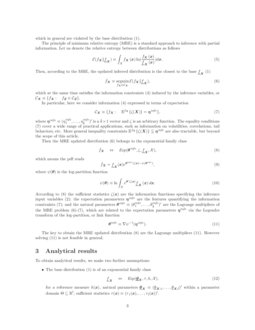 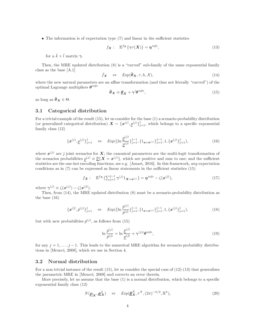 Inference is ubiquitous in financial applications: stress-testing and scenario analysis, such as in [Mina and Xiao, 2001], explore the consequences of specific market scenarios on the distribution of the portfolio loss. Similar, portfolio construction techniques such as [Black and Litterman, 1990]

inject views on specific factor returns into the estimated distribution of a broad market.

A general approach to perform inference under partial information based on the principle of minimum relative entropy (MRE) was explored in [Meucci, 2010]. In the original paper, the general theory was supported by two applications: an analytical solution under normality, and a numerical algorithm for distributions represented by scenarios, such as Monte Carlo, historical, or categorical.

Here we enhance both the analytical and the numerical implementations of [Meucci, 2010] drawing from results in [Colasante, 2019].

In Section 2 we state well-known results to set the notation and background.

In Section 3, we embed the analytical MRE problem under normality and information on expectations and covariances of arbitrary linear combinations into a broader analytical framework. In computing the solution, we find that the updated expectation in [Meucci, 2010] must be adjusted by a term implied by the information on the covariances.

In Section 4, we address the MRE problem numerically. Most numerical applications of MRE which involve Monte Carlo sampling methods, such as stochastic approximation, or sample path optimization algorithms, see [Schofield, 2007], could be inefficient. On the other hand, the scenario-based MRE algorithm in [Meucci, 2010]

does not entail drawing scenarios, and as such is efficient, but subject to the curse of dimensionality which may affect precision. Here we improve the original scenario-based MRE in

In Section 5 we present a case study that applies and compares the analytical solution and the numerical algorithm.

be a target vector with a reference base distribution with support

, as represented by the probability density function (pdf)

for a suitable multivariate function ζ:R¯n→R¯k. In applications, the number ¯n of target variables is typically much larger than the number ¯k of inference variables

which in general are violated by the base distribution (1).

Then, according to the MRE, the updated inferred distribution is the closest to the base f––X (1)

which at the same time satisfies the information constraints (4) induced by the inference variables, or CX≡{fX:fZ∈CZ}.

In particular, here we consider information (4) expressed in terms of expectation

where ηinfo≡(ηinfo1,…,ηinfo¯k)′ is a ¯k×1 vector and ζ is an arbitrary function. The equality conditions (7) cover a wide range of practical applications, such as information on volatilities, correlations, tail behaviors, etc. More general inequality constraints EfX{ζ(X)}≦ηinfo are also tractable, but beyond the scope of this article.

which means the pdf reads

According to (8) the sufficient statistics ζ(x) are the information functions specifying the inference input variables (2); the expectation parameters ηinfo are the features quantifying the information constraints (7); and the natural parameters θinfo≡(θinfo1,…,θinfo¯k)′ are the Lagrange multipliers of the MRE problem (6)-(7), which are related to the expectation parameters ηinfo via the Legendre transform of the log-partition, or link function

The key to obtain the MRE updated distribution (8) are the Lagrange multipliers (11). However solving (11) is not feasible in general.

Then, the MRE updated distribution (8) is a “curved” sub-family of the same exponential family class as the base [A.1]

For a trivial example of the result (15), let us consider for the base (1

where x(j) are ¯ȷ joint scenarios for X

; the canonical parameters are the multi-logit transformation of the scenarios probabilities

, which are positive and sum to one; and the sufficient statistics are the one-hot encoding functions, see e.g.

[Amari, 2016]. In this framework, any expectation conditions as in (7) can be expressed as linear statements in the sufficient statistics (15)

Then, from (14), the MRE updated distribution (8) must be a scenario-probability distribution as the base (16)

but with new probabilities ¯p(j), as follows from (15)

for any j=1,…,¯ȷ−1. This leads to the numerical MRE algorithm for scenario-probability distributions in [Meucci, 2008], which we use in Section 4.

For a non-trivial instance of the result (15), let us consider the special case of (12)-(13) that generalizes the parametric MRE in [Meucci, 2008] and corrects an error therein.

More precisely, let us assume that the base (1) is a normal distribution, which belongs to a specific exponential family class (12)

and where sufficient statistics are pure linear and quadratic functions

Then let us consider MRE inference as in (6)

under information on linear combinations of expectations and covariances

The inference constraints in the MRE problem (23) are not of expectation type (13). However, we can use a two-step approach to leverage this result.

First, we consider all the possible expectation constraints (13) compatible with the information (24)

for any ¯kσ×1 vector ησ; and the related MRE optimization

Because of the expectation constraints (13), for any ησ the solution f(ησ)Xmust be normal due to (14), and we can compute it analytically [A.2]

for a suitable function μ(⋅) and same updated covariance matrix

Second, we compute the optimal vector ηinfoσ that minimizes the relative entropy

which turns out to be a simple quadratic programming problem in ησ [A.4]. Then the updated distribution (23) must be normal as in (27) [A.4]

with updated expectation as follows

and where ¯μX;σ is an ¯n×1 vector defined as follows

the updated expectation (32) simplifies as [A.5]

where the last term on the right hand side is a correction to [Meucci, 2010].

We consider base distributions (1) whose analytical expression is known, possibly up to multiplicative constant term

for some known analytical function g–X , which we call “numerator”.

With general inference of expectation type (7), the MRE updated distribution (8) is an exponential tilt of the base distribution (8) and therefore it has again an analytical expression, up to a constant

for optimal Lagrange multipliers θinfo≡(θinfo1,…,θinfo¯k)′ that solve (11). Therefore, if we we can compute or approximate θinfo, we can draw scenarios from the updated distribution ¯fX [A.6].

An efficient algorithm to compute an approximate updated distribution ¯fX and approximate Lagrange multipliers ^θinfo≈θinfo is the discrete MRE [Meucci, 2008]

The quality of the approximation {x––(j),¯p(j)}¯ȷj=1≈¯fX (40) can be measured by the discrete relative entropy caused by the information perturbation, or, equivalently, the exponential of its negative counterpart, i.e. the effective number of scenarios in [Meucci, 2012]

The approximation in general is poor for problems of large dimensions ¯n: because the scenarios are the same as the base scenarios, when the information constraints (7) are strongly violated by the base distribution (37), the curse of dimensionality forces a few scenarios to carry most of the probability, which amounts to a too low effective number of scenarios ens(¯p,p––)≪1 (41). Instead, because of the low dimension of the information constraints (3), the approximate Lagrange multipliers ^θinfo≈θinfo are much more accurate. Here we show how to exploit this feature to obtain accurate representations of the updated distribution.

To this purpose, let us write the exact updated numerator (39) as

which can be interpreted as an MRE tilt as in (39), but with a new base

and a new Lagrange multipliers

because the numerical MRE multipliers (40) are close to the true ones ^θinfo≈θinfo.

Hence, we can generate new scenarios from the updated base (43)

Then we can update the Lagrange multipliers

and iterate (47)-(48). Convergence in the above routine occurs when the effective number of scenarios (41) falls above a given threshold

We summarize the iterative MRE in the following table.

Then we consider information constraints (4) as follows

Also, we assume that the constraints on correlations (55

X1,X2, so that we can rewrite the information (55) as expectation conditions (7)

We simulate ¯ȷ≡100,000 scenarios with uniform probabilities (38) from the normal base distribution (52). Then, from the base scenarios and the information (56) we compute the MRE updated distribution (39) using the iterative numerical routine (1). The routine reaches convergence in three steps with a threshold δ≡0.01 (51).

Equivalently, we can express the information (56) as constraints on linear combinations of expectations and covariances as in (24), where:

Then, from the base normal distribution (52) and the information (56), we compute analytically the MRE updated distribution (6), which is normal (31)

where the updated expectations (32) and standard deviations (28) read

and the updated correlations (28) read

In Figure 1 we report the results of numerical and analytical approaches, and in the following Table 2 we summarize the errors between the respective statistics.

In this article we showed how to solve analytically and numerically the MRE problem under exponential-family base distributions and partial information constraints of expectation type as in (13).

Under normal base distributions, we computed analytically the MRE solution (31) and fixed the formulation of the updated expectation originally proposed by [Meucci, 2010].

Under more general base distributions, we showed how to compute numerically the MRE solution via iterative Hamiltonian Monte Carlo simulations (Table 1) yielding a better approximation of the updated distribution than the original scenario-based algorithm in [Meucci, 2010].

Here we discuss some technical results of Sections 3 and 4.

a.1 MRE with exponential-family base

Consider a base distribution f––X (1) in the exponential family class Exp(θ––X,τ,h,X) as in (12), where θ––X∈Θ, and hence with the following pdf

Then the updated distribution ¯fX (9) reads

where in the second row we used the linearity of the inference functions ζ with respect to the sufficient statistics τ as in (13); and where we defined

which implies our desired result (14).

a.2 MRE update with normal base and information on non-central moments

The pdf of the normal base distribution f––X as in (20) can be written in canonical form within the exponential family class Exp(θ––NX,τN,hN,R¯n) (20) as follows