A labelled, undirected graph is a graph whose edges have assigned labels, from a specific set. Given a labelled, undirected graph, the well-known minimum labelling spanning tree problem is aimed at finding the spanning tree of the graph with the minimum set of labels. This combinatorial problem, which is NP-hard, can be also formulated as to give the minimum number of labels that provide single connectivity among all the vertices of the graph. Here we consider instead the problem of finding the minimum set of labels that provide bi-connectivity among all the vertices of the graph. A graph is bi-connected if there are at least two disjoint paths joining every pair of vertices. We consider both bi-connectivity concept: the edge bi-connectivity where these paths cannot have a common edge and the vertex bi-connectivity where the paths cannot have a common vertex. We describe our preliminary investigation on the problem and provide the details on the solution approaches for the problem under current development. 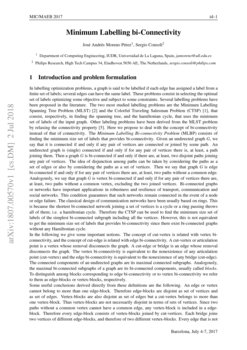 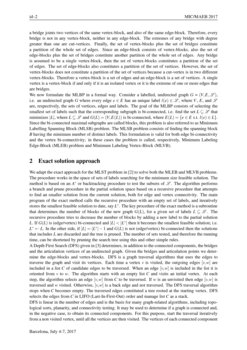 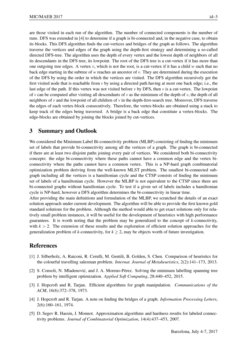 In this paper we describe an extension of the Variable Neighbourhood Sea...
Sergio Consoli, et al. ∙

Graphs without gap-vertex-labellings: families and bounds

A3: An Automatic Topology-Aware Malfunction Detection and Fixation System in Data Center Networks

We now formulate the MLBP in a formal way. Consider a labelled, undirected graph G = (V,E,L), i.e. an undirected graph G where every edge e∈E has an unique label l(e)∈L, where V, E, and L are, respectively, the sets of vertices, edges and labels. The goal of the MLBP consists of selecting the smallest set of labels such that the corresponding subgraph is bi-connected, i.e. find the set L⊆L that minimizes |L|, where L⊆L and G(L)=(V,E(L)) is bi-connected, where E(L)={e∈E s.t. l(e)∈L}. Since the bi-connected maximal subgraphs are called blocks, this problem is also referred to as Minimum Labelling Spanning Block (MLSB) problem. The MLSB problem consists of finding the spanning block B having the minimum number of distinct labels. This formulation is valid for both edge bi-connectivity and the vertex bi-connectivity; in these cases the problem is called, respectively, Minimum Labeling Edge-Block (MLEB) problem and Minimum Labeling Vertex-Block (MLVB).

We adapt the exact approach for the MLST problem in [2] to solve both the MLEB and MLVB problems. The procedure works in the space of sets of labels searching for the minimum size feasible solution. The method is based on an A∗ or backtracking procedure to test the subsets of L. The algorithm performs a branch and prune procedure in the partial solution space based on a recursive procedure that attempts to find an smaller solution from the current solution, both for edge and vertex connectivity. The main program of the exact method calls the recursive procedure with an empty set of labels, and iteratively stores the smallest feasible solution to date, say L∗. The key procedure of the exact method is a subroutine that determines the number of blocks of the new graph G(L), for a given set of labels L⊆L. The recursive procedure tries to decrease the number of blocks by adding a new label to the partial solution L. If G(L) is (edge/vertex) bi-connected and |L|<|L∗| then it becomes the smallest feasible solution; i.e. L∗←L. In the other side, if |L|=|L∗|−1 and G(L) is not (edge/vertex) bi-connected then the solutions that includes L are discarded and the tree is pruned. The number of sets tested, and therefore the running time, can be shortened by pruning the search tree using this and other simple rules.

A Depth First Search (DFS) given in [3] determines, in addition to the connected components, the bridges and the articulation vertices of an undirected graph. Given the bridges and articulation points we determine the edge-blocks and vertex-blocks. DFS is a graph traversal algorithms that uses the edges to traverse the graph and visit its vertices. Each time a vertex v is visited, the outgoing edges [v,w] are included in a list C of candidate edges to be traversed. When an edge [v,w] is included in the list it is oriented from v to w. The algorithm starts with an empty list C and visits an initial vertex. At each step, the algorithm selects an edge [v,w] from C to be traversed. If w is an unvisited then edge [v,w] is traversed and w visited. Otherwise, [v,w] is a back edge and not traversed. The DFS traversal algorithm stops when C becomes empty. The traversed edges constituted a tree rooted at the starting vertex. DFS selects the edges from C in LIFO (Last-In-First-Out) order and manage list C as a stack.

DFS is linear in the number of edges and is the basis for many graph-related algorithms, including topological sorts, planarity, and connectivity testing. It may be used to determine if a graph is connected and, in the negative case, to obtain its connected components. For this purpose, start the traversal iteratively from a non visited vertex, until all the vertices are then visited. The vertices of each connected component are those visited in each run of the algorithm. The number of connected components is the number of runs. DFS was extended in [4] to determine if a graph is bi-connected and, in the negative case, to obtain its blocks. This DFS algorithm finds the cut-vertices and bridges of the graph as follows. The algorithm traverse the vertices and edges of the graph using the depth-first strategy and determining a so-called directed DFS-tree. The algorithm uses the depth of every vertex and the lowest depth of neighbors of all its descendants in the DFS tree, its lowpoint. The root of the DFS tree is a cut-vertex if it has more than one outgoing tree edges. A vertex v, which is not the root, is a cut-vertex if it has a child w such that no back edge starting in the subtree of w reaches an ancestor of v. They are determined during the execution of the DFS by using the order in which the vertices are visited. The DFS algorithm recursively get the first visited node that is reachable from v by using a directed path having at most one back edge; i.e., the last edge of the path. If this vertex was not visited before v by DFS, then v is a cut-vertex. The lowpoint of v can be computed after visiting all descendants of v as the minimum of the depth of v, the depth of all neighbors of v and the lowpoint of all children of v in the depth-first-search tree. Moreover, DFS traverse the edges of each vertex-block consecutively. Therefore, the vertex-blocks are obtained using a stack to keep track of the edges being traversed. A bridge is a back edge that constitute a vertex-blocks. The edge-blocks are obtained by joining the blocks joined by cut-vertices.

After providing the main definitions and formulation of the MLBP, we scratched the details of an exact solution approach under current development. The algorithm will be able to provide the first known gold standard solutions for the problem. Although the method would able to get exact solutions only for relatively small problem instances, it will be useful for the development of heuristics with high performance guarantees. It is worth noting that the problem may be generalized to the concept of

k-connectivity, with k>2. The extension of these results and the exploration of efficient solution approaches for the generalization problem of k-connectivity, for k≥2, may be objects worth of future investigation.