To date most linear and nonlinear Kalman filters (KFs) have been developed under the Gaussian assumption and the well-known minimum mean square error (MMSE) criterion. In order to improve the robustness with respect to impulsive (or heavy-tailed) non-Gaussian noises, the maximum correntropy criterion (MCC) has recently been used to replace the MMSE criterion in developing several robust Kalman-type filters. To deal with more complicated non-Gaussian noises such as noises from multimodal distributions, in the present paper we develop a new Kalman-type filter, called minimum error entropy Kalman filter (MEE-KF), by using the minimum error entropy (MEE) criterion instead of the MMSE or MCC. Similar to the MCC based KFs, the proposed filter is also an online algorithm with recursive process, in which the propagation equations are used to give prior estimates of the state and covariance matrix, and a fixed-point algorithm is used to update the posterior estimates. In addition, the minimum error entropy extended Kalman filter (MEE-EKF) is also developed for performance improvement in the nonlinear situations. The high accuracy and strong robustness of MEE-KF and MEE-EKF are confirmed by experimental results. 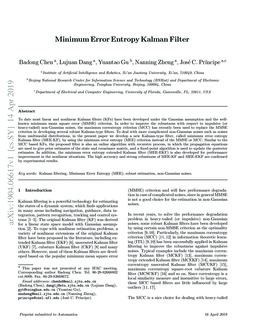 Consider a space object in an orbit about the earth. An uncertain initia...
John T. Kent, et al. ∙

In this paper we propose a smoothing turbo equalizer based on the expect...
Irene Santos, et al. ∙

Kalman filtering is a powerful technology for estimating the states of a dynamic system, which finds applications in many areas including navigation, guidance, data integration, pattern recognition, tracking and control systems

and so on. Since correntropy is a local similarity measure and insensitive to large errors, these MCC based filters are little influenced by large outliers

The MCC is a nice choice for dealing with heavy-tailed non-Gaussian noises, but its performance may not be good when facing more complicated non-Gaussian noises, such as noises from multimodal distributions. The minimum error entropy (MEE) criterion [34, 35] is another important learning criterion in ITL, which has been successfully applied in robust regression, classification, system identification and adaptive filtering [34, 35, 36, 37, 38]. Numerous experimental results show that MEE can outperform MCC in many situations although its computational complexity is a little higher [39, 40]. In addition, the superior performance and robustness of MEE have been proved in [41]. The goal of this work is to develop a new Kalman-type filter, called minimum error entropy Kalman filter (MEE-KF), by using the MEE as the optimality criterion. The proposed filter uses the propagation equations to obtain the prior estimates of the state and covariance matrix, and a fixed-point algorithm to update the posterior estimates and covariance matrix, recursively and online. To further improve the performance in the nonlinear situations, the MEE criterion is also incorporated into EKF, resulting in minimum error entropy extended Kalman filter (MEE-EKF).

The rest of the paper is organized as follows. In section II, we briefly review the KF algorithm and MEE criterion. In section III, we develop the MEE-KF algorithm. Sections IV and V provide the computational complexity and convergence analysis, respectively. In section VI, the MEE-EKF is developed. The experimental results are presented in section VII and finally, the conclusion is given in section VIII.

where F∈Rn×n and H∈Rm×n are the state-transition matrix and measurement matrix, respectively. Here, the process noise q(k−1)∈Rn×1 and measurement noise r(k)∈Rm×1 are mutually independent, and satisfy

where Q(k−1) and R(k) are the covariance matrices of q(k−1) and r(k), respectively. In general, the KF includes two steps:

(1) Predict: The a-priori estimate ^x(k|k−1) and the corresponding error covariance matrix P(k|k−1) are calculated by

(2) Update: The a-posteriori estimate ^x(k) and the corresponding error covariance matrix P(k) are obtained by

where K(k) is the Kalman filter gain.

Different from the MMSE [34] and MCC [35], the MEE aims to minimize the information contained in the error. In MEE, the error information e can be measured by the Renyi’s entropy:

where α(α≠1,α>0) is the order of Renyi’s entropy, and Vα(e) denotes the information potential defined by

is the probability density function (PDF) of error

e and E[⋅] denotes the expectation operator. In practical applications, the PDF p(x) can be estimated by Parzen’s window approach [11]:

First, we denote the state prediction error as

Combining the above state prediction error with the measurement equation (2), one can obtain an augmented model

where In denotes a n×nidentity matrix, and

Based on (14), the cost function of MEE-KF is given by

Then, the optimal solution to ^x(k) is achieved by maximizing the cost function (23), that is

Setting the gradient of the cost function JL(x(k)) regarding x(k) to zero, we have

By using the matrix inversion lemma

Then, the posterior covariance matrix can be updated by

With the above derivations, the proposed MEE-KF algorithm can be summarized as Algorithm 1.

This section provides the comparison of the computational complexities of KF, maximum correntropy Kalman filter (MCKF) [15] and MEE-KF in terms of the floating point operations.

The KF updates with Eqs. (6)-(10), and the corresponding floating point operations are given in Table 1. From Table 1, we can conclude that the computational complexity of KF is

According to [15], the computational complexity of MCKF is

where T denotes the fixed-point iteration number, which is relatively small in general as shown in simulations in Section VII.

This section provides a sufficient condition to ensure the convergence of the fixed point iterations in MEE-KF, where the proof is similar to [35] and thus will not be provided here.

Thus, a n×n Jacobian matrix of g(x(k)) with respect to x(k) gives