We study minimax rates for high-dimensional linear regression with additive errors under the ℓ_p (1≤ p<∞)-losses, where the regression parameter is of weak sparsity. Our lower and upper bounds agree up to constant factors, implying that the proposed estimator is minimax optimal. 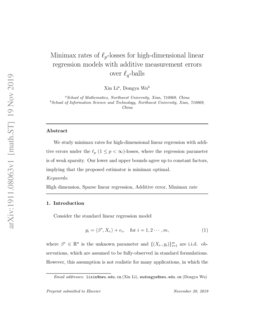 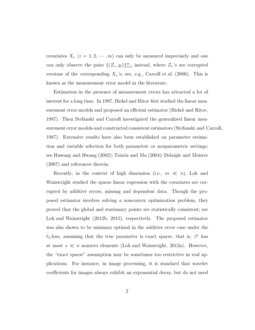 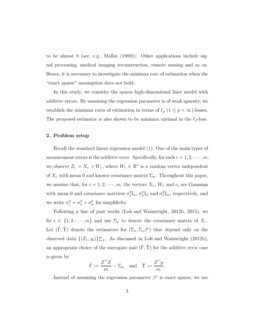 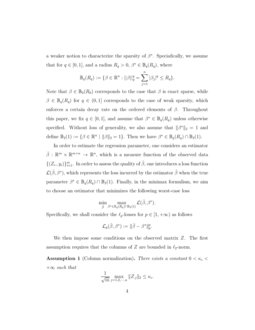 where β∗∈Rn is the unknown parameter and {(Xi⋅,yi)}mi=1 are i.i.d. observations, which are assumed to be fully-observed in standard formulations. However, this assumption is not realistic for many applications, in which the covariates Xi⋅ (i=1,2,⋯,m) can only be measured imprecisely and one can only observe the pairs {(Zi⋅,yi)}mi=1 instead, where Zi⋅’s are corrupted versions of the corresponding Xi⋅’s; see, e.g., Carroll et al. (2006). This is known as the measurement error model in the literature.

Estimation in the presence of measurement errors has attracted a lot of interest for a long time. In 1987, Bickel and Ritov first studied the linear measurement error models and proposed an efficient estimator (Bickel and Ritov, 1987). Then Stefanski and Carroll investigated the generalized linear measurement error models and constructed consistent estimators (Stefanski and Carroll, 1987). Extensive results have also been established on parameter estimation and variable selection for both parametric or nonparametric settings; see Huwang and Hwang (2002); Tsiatis and Ma (2004); Delaigle and Meister (2007) and references therein.

Recently, in the context of high dimension (i.e., m≪n), Loh and Wainwright studied the sparse linear regression with the covariates are corrupted by additive errors, missing and dependent data. Though the proposed estimator involves solving a nonconvex optimization problem, they proved that the global and stationary points are statistically consistent; see Loh and Wainwright (2012b, 2015), respectively. The proposed estimator was also shown to be minimax optimal in the additive error case under the ℓ2-loss, assuming that the true parameter is exact sparse, that is, β∗ has at most s≪n nonzero elements (Loh and Wainwright, 2012a). However, the “exact sparse” assumption may be sometimes too restrictive in real applications. For instance, in image processing, it is standard that wavelet coefficients for images always exhibit an exponential decay, but do not need to be almost 0 (see, e.g., Mallat (1989)). Other applications include signal processing, medical imaging reconstruction, remote sensing and so on. Hence, it is necessary to investigate the minimax rate of estimation when the “exact sparse” assumption does not hold.

In this study, we consider the sparse high-dimensional liner model with additive errors. By assuming the regression parameter is of weak sparsity, we establish the minimax rates of estimation in terms of ℓp (1≤p<∞)-losses. The proposed estimator is also shown to be minimax optimal in the ℓ2-loss.

Recall the standard linear regression model (1). One of the main types of measurement errors is the additive error. Specifically, for each i=1,2,⋯,m, we observe Zi⋅=Xi⋅+Wi⋅, where Wi⋅∈Rn

is a random vector independent of

Instead of assuming the regression parameter β∗ is exact sparse, we use a weaker notion to characterize the sparsity of β∗. Speciafically, we assume that for q∈[0,1], and a radius Rq>0, β∗∈Bq(Rq), where

Note that β∈B0(R0) corresponds to the case that β is exact sparse, while β∈Bq(Rq) for q∈(0,1] corresponds to the case of weak sparsity, which enforces a certain decay rate on the ordered elements of β. Throughout this paper, we fix q∈[0,1], and assume that β∗∈Bq(Rq) unless otherwise specified. Without loss of generality, we also assume that ∥β∗∥2=1 and define B2(1):={β∈Rn | ∥β∥2=1}. Then we have β∗∈Bq(Rq)∩B2(1).

In order to estimate the regression parameter, one considers an estimator ^β:Rm×Rm×n→Rn, which is a measure function of the observed data {(Zi⋅,yi)}mi=1. In order to assess the quality of ^β

, one introduces a loss function

L(^β,β∗), which represents the loss incurred by the estimator ^β when the true parameter β∗∈Bq(Rq)∩B2(1). Finally, in the minimax formulism, we aim to choose an estimator that minimizes the following worst-case loss

Specifically, we shall consider the ℓp-losses for p∈[1,+∞) as follows

We then impose some conditions on the observed matrix Z. The first assumption requires that the columns of Z are bounded in ℓ2-norm.

There exists a constant 0<κc<+∞ such that

Previous researches have shown that Assumption 1 and 2

are satisfied by a wide range of random matrices with high probability; see, e.g.,

Let Pβ denote the distribution of y in the linear model with additive errors, when β is given and Z is observed. The following lemma tells us the Kullback-Leibler (KL) divergence between the distributions induced by two different parameters β,β′∈Bq(Rq), which is beneficial for establishing the lower bound. Recall that for two distributions P and Q which have densities dP and dQ with respect to some base measure μ, the KL divergence is defined by D(P||Q)=∫logdPdQP(dμ).

For each i=1,2,⋯,m fixed, by the model setting, (yi,Zi⋅) is jointly Gaussian with mean 0, and by computing the covariances, one has that

Now assume that σϵ and σw are not both 0; otherwise, the conclusion holds trivially. Since Pβ is a product distribution of yi|Zi⋅ over all i=1,2,⋯,m, we have from (2) that

Substituting this equality into (3) yields that

The proof is completed. ∎

In the additive error setting, suppose that the observed matrix Z satisfies Assumption 1 with 0<κc<+∞. Then for any p∈[1,+∞), there exists a constant cq,p depending only on q and p such that, with probability at least 1/2, the minimax ℓp-loss over the ℓq-ball is lower bounded as

Let Mp(δ) denote the cardinality of a maximal packing of the ball Bq(Rq) in the lp metric with elements {β1,β2,⋯,βM}. We follow the standard technique (Yang and Barron, 1999) to transform the estimation on lower bound into a multi-way hypothesis testing problem as follows

is a random variable uniformly distributed over the packing set

{β1,β2,⋯,βM}, and ~β is an estimator taking values in the packing set. It then follows from Fano’s inequality (Yang and Barron, 1999) that

Let absconvq(Z/√m) denote the q-convex hull of the rescaled columns of the observed matrix Z, that is,

where the normalization 1/√m is used for convenience. Since Z satisfies Assumption 1, Raskutti et al. (Unpublished results, Lemma 4) is applicable to concluding that there exists a set {Z~β1,Z~β2,⋯,Z~βN} such that for all Zβ∈absconvq(Z), there exists some index i and some constant c>0 such that ∥Z(β−~βi)∥2/√m≤cκcϵ. Combining this inequality with Lemma 1 and (6), one has that the mutual information is upper bounded as

It remains to choose the packing and covering set radii (i.e., δ and ϵ, respectively) such that (7) is strictly above zero, say bounded below by 1/2. For simplicity, denote σ2:=σ2z(σ2xσ2w+σ2zσ2ϵ)σ4x. Suppose that we choose the pair (δ,ϵ) such that

as desired. It remains to determine the values of the pair (δ,ϵ) satisfying (8). By Raskutti et al. (Unpublished results, Lemma 3), we know that if c2mσ2κ2cϵ2=Lq,2[R22−qq(1ϵ)2q2−qlogn] for some constant Lq,2 depending only on q, then (8a) is satisfied. Thus, we can choose ϵ satisfying

Also it follows from Raskutti et al. (Unpublished results, Lemma 3) that if δ is chosen as

Combining this inequality with (9) and (4), we obtain that there exists a constant cq,p depending only on q and p such that,

The proof is complete. ∎

Note that the probability 1/2 in Theorem 1 is just a standard convention, and it may be made arbitrarily close to 1 by choosing the universal constants suitably.

In the additive error setting, suppose that for a universal constant c1, ^Γ satisfies Assumption 2 with κl>0 and τl(Rq,m,n)≤c1Rq(lognm)1−q/2. Then there exist universal constants (c2,c3) and a constant cq denpending only on q such that, with probability at least 1−c2exp(−c3logn), the minimax ℓ2-loss over the ℓq-ball is upper bounded as

It suffices to find an estimator for β∗, which has small ℓ2-norm error with high probability,. We consider the estimator as follows

This inequality, together with the assumption that ^Γ satisfies Assumption 2, implies that

It then follows from Loh and Wainwright (2012b, Lemma 2) that there exist universal constants (c2,c3,c4) such that, with probability at least 1−c2exp(−c3logn),

Therefore, by solving this inequality with the indeterminate viewed as ∥^Δ∥2, we obtain that there exists a constant cq depending only on q such that, (12) holds with probability at least 1−c2exp(−c3logn). The proof is complete. ∎

(ii) Note that when p=2 and q=0 (i.e., the exact sparse case), the minimax rate scales as Θ(R0lognm). In the regime when n/R0∼nγ for some constant γ>0, the rate is equivalent to R0log(n/R0)m (up to constant factors), which re-capture the same scaling as in Loh and Wainwright (2012a).

We focused on the information-theoretic limitations of estimation for sparse linear regression with additive errors under the high-dimensional scaling. Further research may generalize the current result to sub-Gaussian matrices with non-diagonal covariances, or other types of measurement errors, such as the multiplicative error.