We study the stochastic Multi-Armed Bandit (MAB) problem under worst case regret and heavy-tailed reward distribution. We modify the minimax policy MOSS <cit.> for the sub-Gaussian reward distribution by using saturated empirical mean to design a new algorithm called Robust MOSS. We show that if the moment of order 1+ϵ for the reward distribution exists, then the refined strategy has a worst-case regret matching the lower bound while maintaining a distribution dependent logarithm regret. 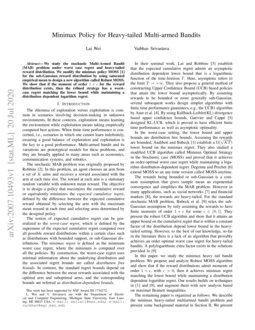 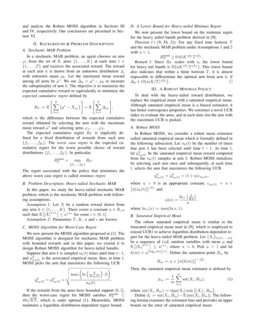 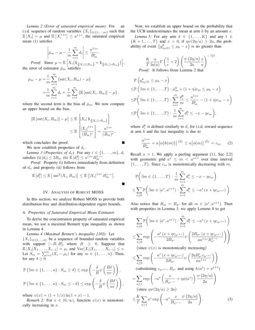 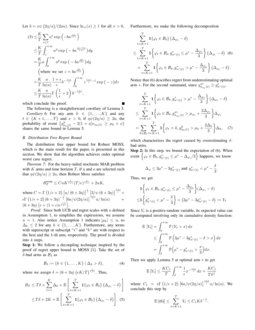 The dilemma of exploration versus exploitation is common in scenarios involving decision-making in unknown environments. In these contexts, exploration means learning the environment while exploitation means taking empirically computed best actions. When finite time performance is concerned, i.e., scenarios in which one cannot learn indefinitely, ensuring a good balance of exploration and exploitation is the key to a good performance. Multi-armed bandit and its variations are prototypical models for these problems, and they are broadly applied in many areas such as economics, communication systems, and robotics.

The stochastic MAB problem was originally proposed by Robbins [2]. In this problem, an agent chooses an arm from a set of K

arms and receives a reward associated with the arm at each time slot. The reward at each arm is a stationary random variable with unknown mean reward. The objective is to design a policy that maximizes the cumulative reward or equivalently minimizes the

minimax regret is defined as the minimum worst case regret, where the minimum is computed over all the policies. By construction, the worst-case regret uses minimal information about the underlying distribution and the associated regret bounds are called distribution free bounds. In contrast, the standard regret bounds depend on the difference between the mean rewards associated with the optimal arm and suboptimal arms, and the corresponding bounds are referred as distribution-dependent bounds.

In their seminal work, Lai and Robbins [3] establish that the expected cumulative regret admits an asymptotic distribution dependent lower bound that is a logarithmic function of the time-horizon T. Here, asymptotic refers to the limit T→+∞. They also propose a general method of constructing Upper Confidence Bound (UCB) based policies that attain the lower bound asymptotically. By assuming rewards to be bounded or more generally sub-Gaussian, several subsequent works design simpler algorithms with finite time performance guarantees, e.g., the UCB1 algorithm by Auer et al. [4]. By using Kullback-Leibler(KL) divergence based upper confidence bounds, Garivier and Cappé [5] designed KL-UCB, which is proved to have efficient finite time performance as well as asymptotic optimality.

In the worst-case setting, the lower bound and upper bounds are distribution free bounds. Assuming the rewards are bounded, Audibert and Bubeck [1] establish a Ω(√KT) lower bound on the minimax regret. They also studied a modified UCB algorithm called Minimax Optimal Strategy in the Stochastic case (MOSS) and proved that it achieves an order-optimal worst case regret while maintaining a logarithm distribution-dependent regret. Degenne and Perchet [6] extend MOSS to an any-time version called MOSS-anytime.

The rewards being bounded or sub-Gaussian is a common assumption that gives sample mean an exponential convergence and simplifies the MAB problem. However in many applications, such as social networks [7] and financial markets [8], the rewards are heavy-tailed. For the standard stochastic MAB problem, Bubeck et al. [9] relax the sub-Gaussian assumption by only assuming the rewards to have finite moments of order 1+ϵ for some ϵ∈(0,1]. They present the robust UCB algorithm and show that it attains an upper bound on the cumulative regret that is within a constant factor of the distribution depend lower bound in the heavy-tailed setting. However, to the best of our knowledge, so-far in the literature there is a lack of an algorithm that provably achieves an order optimal worst case regret for heavy-tailed bandits. A polylogarithmic extra factor exists in the solutions provided in [9].

In this paper, we study the minimax heavy tail bandit problem. We propose and analyze Robust MOSS algorithm and show that if the reward distributions admit moments of order 1+ϵ, with ϵ>0, then it achieves minimax regret matching the lower bound while maintaining a distribution dependent logarithm regret. Our results builds on techniques in [1] and [9], and augment them with new analysis based on maximal Bennett inequalities.

The remaining paper is organized as follows. We describe the minimax heavy-tailed multiarmed bandit problem and present some background material in Section II. We present and analyze the Robust MOSS algorithm in Sections III and IV, respectively. Our conclusions are presented in Section VI.

In a stochastic MAB problem, an agent chooses an arm φt from the set of K arms {1,…,K} at each time t∈{1,…,T} and receives the associated reward. The reward at each arm k is drawn from an unknown distribution fk with unknown mean μk. Let the maximum mean reward among all arms be μ∗. We use Δk=μ∗−μk to measure the suboptimality of arm k. The objective is to maximize the expected cumulative reward or equivalently to minimize the expected cumulative regret defined by

which is the difference between the expected cumulative reward obtained by selecting the arm with the maximum mean reward μ∗ and selecting arms φ1,…,φT.

The regret associated with the policy that minimizes the above worst case regret is called minimax regret.

Parameters T, K, u and ϵ are known.

Suppose that arm k is sampled nk(t) times until time t−1, and ¯μknk(t) is the associated empirical mean, then, at time t, MOSS picks the arm that maximizes the following UCB

If the rewards from the arms have bounded support [0,1], then the worst-case regret for MOSS satisfies RworstT≤49√KT, which is order optimal [1]. Meanwhile, MOSS maintains a logarithm distribution-dependent regret bound.

We now present the lower bound on the minimax regret for the heavy tailed bandit problem derived in [9].

For any fixed time horizon T and the stochastic MAB problem under Assumptions 1 and 2 with u=1,

Since RT scales with u, the lower bound for heavy tail bandit is Ω(uKϵ1+ϵT11+ϵ). This lower bound also indicates that within a finite horizon T, it is almost impossible to differentiate the optimal arm from arm k, if Δk∈O(u(K/T)ϵ1+ϵ). □

In Robust MOSS, we consider a robust mean estimator called saturated empirical mean which is formally defined in the following subsection. Let nk(t) be the number of times that arm k has been selected until time t−1. At time t, let ^μknk(t) be the saturated empirical mean reward computed from the nk(t) samples at arm k. Robust MOSS initializes by selecting each arm once and subsequently, at each time t, selects the arm that maximizes the following UCB

The robust saturated empirical mean is similar to the truncated empirical mean used in [9], which is employed to extend UCB1 to achieve logarithm distribution dependent regret for the heavy-tailed MAB problem. Let {Xi}i∈{1,…,m} be a sequence of i.i.d. random variables with mean μ and E[\absXi1+ϵ]≤u1+ϵ, where u>0. Pick a>1 and let h(m)=a⌊loga(m)⌋+1. Define the saturation point Bm by

Then, the saturated empirical mean estimator is defined by

Define di:=sat(Xi,Bm)−E[sat(Xi,Bm)]. The following lemma examines the estimator bias and provides an upper bound on the error of saturated empirical mean.

where the second term is the bias of ^μm. We now compute an upper bound on the bias.

which concludes the proof.

We now establish properties of di.

Property (i) follows immediately from definition of di, and property (ii) follows from

In this section, we analyze Robust MOSS to provide both distribution-free and distribution-dependent regret bounds.

To derive the concentration property of saturated empirical mean, we use a maximal Bennett type inequality as shown in Lemma 4.

For x∈(0,∞), function ψ(x) is monotonically increasing in x.

Now, we establish an upper bound on the probability that the UCB underestimates the mean at arm

k by an amount x.

It follows from Lemma 2 that

where dki is defined similarly to di for i.i.d. reward sequence at arm k and the last inequality is due to

Also notice that Bm=Bas for all m∈[as,as+1). Then with properties in Lemma 3, we apply Lemma 4 to get

which conclude the proof.

The following is a straightforward corollary of Lemma 5.

The distribution free upper bound for Robust MOSS, which is the main result for the paper, is presented in this section. We show that the algorithm achieves order optimal worst case regret.

For the heavy-tailed stochastic MAB problem with K arms and time horizon T, if η and a are selected such that ηψ(2η/a)≥2a, then Robust Moss satisfies

Since both UCB and regret scales with u defined in Assumption 1, to simplifies the expressions, we assume u=1. Also notice Assumption 1 indicates \absμk≤u, so Δk≤2 for any k∈{1,…,K}. Furthermore, any terms with superscript or subscript “∗” and “k” are with respect to the best and the k-th arm, respectively. The proof is divided into 4 steps.

Step 1: We follow a decoupling technique inspired by the proof of regret upper bound in MOSS [1]. Take the set of δ-bad arms as Bδ as

Furthermore, we make the following decomposition

Notice that (6) describes regret from underestimating optimal arm ∗. For the second summand, since gφtnφt(t)≥g∗n∗(t),

which characterizes the regret caused by overestimating δ-bad arms.

Since Yt is a positive random variable, its expected value can be computed involving only its cumulative density function:

Then we apply Lemma 5 at optimal arm ∗ to get

With Δk≥δ, we get lk is no less than

Furthermore, since cm is monotonically decreasing with m, for m≥lk,

With this result and lk≥1, we continue from (8) to get

Therefore by using Lemma 4 together with (ii) from Lemma 3, we get

For the heavy-tailed stochastic MAB problem with K arms and time horizon T, if ηψ(2η/a)≥2a, the regret RT for Robust Moss is no greater than