Estimation of functions of d variables is considered using ridge combinations of the form ∑_k=1^m c_1,kϕ(∑_j=1^d c_0,j,kx_j-b_k) where the activation function ϕ is a function with bounded value and derivative. These include single-hidden layer neural networks, polynomials, and sinusoidal models. From a sample of size n of possibly noisy values at random sites X ∈ B = [-1,1]^d , the minimax mean square error is examined for functions in the closure of the ℓ_1 hull of ridge functions with activation ϕ . It is shown to be of order d/n to a fractional power (when d is of smaller order than n ), and to be of order ( d)/n to a fractional power (when d is of larger order than n ). Dependence on constraints v_0 and v_1 on the ℓ_1 norms of inner parameter c_0 and outer parameter c_1 , respectively, is also examined. Also, lower and upper bounds on the fractional power are given. The heart of the analysis is development of information-theoretic packing numbers for these classes of functions. 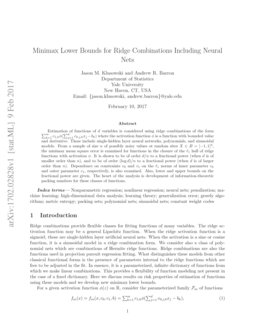 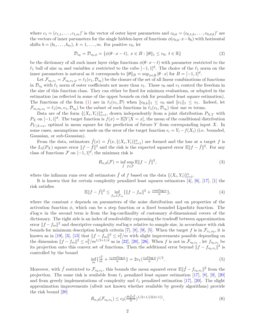 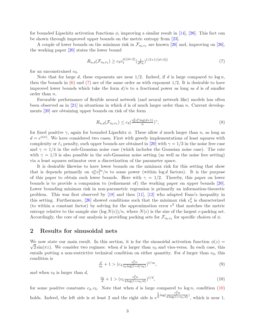 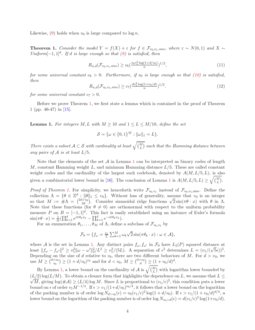 Ridge combinations provide flexible classes for fitting functions of many variables. The ridge activation function may be a general Lipschitz function. When the ridge activation function is a sigmoid, these are single-hidden layer artificial neural nets. When the activation is a sine or cosine function, it is a sinusoidal model in a ridge combination form. We consider also a class of polynomial nets which are combinations of Hermite ridge functions. Ridge combinations are also the functions used in projection pursuit regression fitting. What distinguishes these models from other classical functional forms is the presence of parameters internal to the ridge functions which are free to be adjusted in the fit. In essence, it is a parameterized, infinite dictionary of functions from which we make linear combinations. This provides a flexibility of function modeling not present in the case of a fixed dictionary. Here we discuss results on risk properties of estimation of functions using these models and we develop new minimax lower bounds.

For a given activation function ϕ(z) on R, consider the parameterized family Fm of functions

is the vector of outer layer parameters and

be the dictionary of all such inner layer ridge functions ϕ(θ⋅x−t) with parameter restricted to the ℓ1 ball of size v0 and variables x restricted to the cube [−1,1]d. The choice of the ℓ1 norm on the inner parameters is natural as it corresponds to ∥θ∥B=supx∈B|θ⋅x| for B=[−1,1]d.

Let Fv0,v1=Fv0,v1,ϕ=ℓ1(v1,Dv0) be the closure of the set of all linear combinations of functions in Dv0 with ℓ1 norm of outer coefficients not more than v1. These v0 and v1 control the freedom in the size of this function class. They can either be fixed for minimax evaluations, or adapted in the estimation (as reflected in some of the upper bounds on risk for penalized least square estimation). The functions of the form eq:ridge are in ℓ1(v1,D) when ∥c0,k∥1≤v0 and ∥c1∥1≤v1. Indeed, let Fm,v0,v1=ℓ1(m,v1,Dv0) be the subset of such functions in ℓ1(v1,Dv0) that use m terms.

, drawn independently from a joint distribution

PX,Y with PX on [−1,1]d. The target function is f(x)=E[Y|X=x], the mean of the conditional distribution PY|X=x, optimal in mean square for the prediction of future Y from corresponding input X. In some cases, assumptions are made on the error of the target function ϵi=Yi−f(Xi) (i.e. bounded, Gaussian, or sub-Gaussian).

where the infimum runs over all estimators ^f of f based on the data {(Xi,Yi)}ni=1.

It is known that for certain complexity penalized least squares estimators [4], [6], [17], [1] the risk satisfies

where the constant c depends on parameters of the noise distribution and on properties of the activation function ϕ, which can be a step function or a fixed bounded Lipschitz function. The dlogn in the second term is from the log-cardinality of customary d-dimensional covers of the dictionary. The right side is an index of resolvability expressing the tradeoff between approximation error ∥f−fm∥2 and descriptive complexity mdlogn relative to sample size, in accordance with risk bounds for minimum description length criteria [7], [8], [9], [5]. When the target f is in Fv1,v0, it is known as in [19], [3], [13] that ∥f−fm∥2≤v21/m with slight improvements possible depending on the dimension ∥f−fm∥2≤v21/m1/2+1/d as in [22], [20], [26]. When f is not in Fv0,v1 , let fv0,v1 be its projection onto this convex set of functions. Then the additional error beyond ∥f−fv0,v1∥2 is controlled by the bound

Moreover, with ^f restricted to Fv0,v1, this bounds the mean squared error E∥^f−fv0,v1∥2 from the projection. The same risk is available from ℓ1 penalized least square estimation [17], [8], [9], [20] and from greedy implementations of complexity and ℓ1 penalized estimation [17], [20]. The slight approximation improvements (albeit not known whether available by greedy algorithms) provide the risk bound [20]

for bounded Lipschitz activation functions ϕ, improving a similar result in [14], [26]. This fact can be shown through improved upper bounds on the metric entropy from [23].

for an unconstrained v0.

Note that for large d, these exponents are near 1/2. Indeed, if d is large compared to logn, then the bounds in eq:upperlowdim and eq:lowerhighdim0 are of the same order as with exponent 1/2. It is desirable to have improved lower bounds which take the form d/n to a fractional power as long as d is of smaller order than n.

Favorable performance of flexible neural network (and neural network like) models has often been observed as in [21] in situations in which d is of much larger order than n. Current developments [20] are obtaining upper bounds on risk of the form

for fixed positive γ, again for bounded Lipschitz ϕ. These allow d much larger than n, as long as d=eo(n). We have considered two cases. First with greedy implementations of least squares with complexity or ℓ1 penalty, such upper bounds are obtained in [20] with γ=1/3 in the noise free case and γ=1/4 in the sub-Gaussian noise case (which includes the Gaussian noise case). The rate with γ=1/3 is also possible in the sub-Gaussian noise setting (as well as the noise free setting) via a least squares estimator over a discretization of the parameter space.

It is desirable likewise to have lower bounds on the minimax risk for this setting that show that is depends primarily on vα0v2α1/n to some power (within logd factors). It is the purpose of this paper to obtain such lower bounds. Here with γ=1/2. Thereby, this paper on lower bounds is to provide a companion to (refinement of) the working paper on upper bounds [20]. Lower bounding minimax risk in non-parametric regression is primarily an information-theoretic problem. This was first observed by [18] and then [11], [12] who adapted Fano’s inequality in this setting. Furthermore, [26] showed conditions such that the minimax risk ϵ2n is characterized (to within a constant factor) by solving for the approximation error ϵ2 that matches the metric entropy relative to the sample size (logN(ϵ))/n, where N(ϵ) is the size of the largest ϵ-packing set. Accordingly, the core of our analysis is providing packing sets for Fv0,v1 for specific choices of ϕ.

We now state our main result. In this section, it is for the sinusoidal activation function ϕ(z)=√2sin(πz). We consider two regimes: when d is larger than v0 and visa-versa. In each case, this entails putting a non-restrictive technical condition on either quantity. For d larger than v0, this condition is

and when v0 is larger than d,

for some universal constant c6>0. Furthermore, if v0 is large enough so that eq:cond2 is satisfied, then

for some universal constant c7>0.

There exists a subset A⊂S with cardinality at least √(ML) such that the Hamming distance between any pairs of A is at least L/5.

Note that the elements of the set A in lmm:subsets can be interpreted as binary codes of length M, constant Hamming weight L, and minimum Hamming distance L/5. These are called constant weight codes and the cardinality of the largest such codebook, denoted by A(M,L/5,L), is also given a combinatorial lower bound in [16]. The conclusion of lmm:subsets is A(M,L/5,L)≥√(ML).

For simplicity, we henceforth write Fv0,v1 instead of Fv0,v1,sine. Define the collection Λ={θ∈Zd:∥θ∥1≤v0}. Without loss of generality, assume that v0 is an integer so that M:=#Λ=(2d+v02d). Consider sinusoidal ridge functions √2sin(πθ⋅x) with θ in Λ. Note that these functions (for θ≠0

) are orthonormal with respect to the uniform probability measure

for some α in (0,1/8). These inequalities hold provided we have the following

bounding the mutual information between ω and the data {(Xi,Yi)}ni=1, where q is any fixed joint density for {(Xi,Yi)}ni=1. When suitable metric entropy upper bounds on the log-cardinality of covers Fω′∈A′:={f:∥f−fω′∥<ϵ′} of F0 are available, one may use q as a uniform mixture of pnω′ for ω′ in A′ as in [26], as long as ϵ and ϵ′ are arranged to be of the same order. In the special case that F0 has small radius already of order ϵ, one has the simplicity of taking A′ to be the singleton set consisting of ω′=0. In the present case, since each element in F0 has squared norm v21/L=5ϵ2 and pairs of elements in F0 have squared separation ϵ2, these function are near f0≡0 and hence we choose q=pn0. A standard calculation yields

We choose ϵn such that this (5/2)nϵ2n≤αlog(#F0). Thus, in accordance with [26], if Nd>v0(ϵn) and Nv0>d(ϵn) are available lower bounds on #F0, to within a constant factor, a minimax lower bound ϵ2n on the L2(P) squared error risk is determined by matching

Solving in either case, we find that

The variation of a function f with respect to a dictionary D [2], also called the atomic norm of f with respect to D, denoted Vf(D), is defined as the infimum of all v such that f is in ℓ1(v,D). Here the closure in the definition of ℓ1(v,D) is taken in L∞.

Define ϕ(z)=√2sin(πz). On the interval [−v0,v0], it can be shown that ϕ(z) has variation Vϕ=2√2πv0 with resepct to the dictionary of unit step activation functions ±step(z′−t′), where step(z)=I{z>0}, or equivalently, variation √2πv0 with respect to the dictionary of signum activation functions with shifts ±sgn(z′−t′), where sgn(z)=2step(z)−1. This can be seen directly from the identity

for |z|≤v. The above form arises from integrating

It is also possible to give minimax lower bounds for the function classes Fv0,v1,ϕℓ with activation function ϕℓ equal to the standardized Hermite polynomial Hℓ/√ℓ!, where Hℓ(z)=(−1)ℓez22dℓdzℓe−z22. As with thm:lower, this requires a lower bound on d:

for some constant c8>0. Moreover, we also need a growth condition on the order of the polynomial ℓ:

for some constant c9>0. In light of eq:cond3, condition eq:cond4 is also satisfied if ℓ is at least a constant multiple of v20log(d/v20).

for some universal constant c10>0.

Remark. It is possible to obtain similar lower bounds with Hℓ(z) replaced by a clipped version, in which it is extended at constant height for |z|>ζℓ,δ, where E[ϕ2ℓ(Z)I{|Z|>ζℓ,δ}]≤δ and Z∼N(0,1). Then corollary conclusions follow also for sigmoid classes using the variation of ϕℓ(z) on {z:|z|≤ζℓ,δ}. Thereby, we obtain lower bounds for sigmoid nets for Gaussian design as well as for the uniform design of cor:lowersigmoid.

Our risk lower bound of the form (v0v21log(1+d/v0)n)1/2 shows that in the very high-dimensional case, it is the v0v21/n to a half-power that controls the rate (to within a logarithmic factor). The v0 and v1, as ℓ1 norms of the inner and outer coefficient vectors, have the interpretations as the effective dimensions of these vectors. Indeed, a vector in Rd with bounded coefficients that has v0 non-negligible coordinates has ℓ1 norm of thin order. These rates confirm that it is the power of these effective dimensions over sample size n (instead of the full ambient dimension d) that controls the main behavior of the statistical risk. Our lower bounds on packing numbers complement the upper bound covering numbers in [10] and [20].

for high-dimensional linear regression. However, there is an important difference. The richness of

Fv0,v1 is largely determined by the sizes of v0 and v1 and Fv0,v1 more flexibly represents a larger class of functions. It would be interesting to see if the 1/2 power in the lower minimax rates in eq:lowerhighdim could be further improved to match or get near eq:upperhighdim.