In the present paper, we consider the estimation of a periodic two-dimensional function f(·,·) based on observations from its noisy convolution, and convolution kernel g(·,·) unknown. We derive the minimax lower bounds for the mean squared error assuming that f belongs to certain Besov space and the kernel function g satisfies some smoothness properties. We construct an adaptive hard-thresholding wavelet estimator that is asymptotically near-optimal within a logarithmic factor in a wide range of Besov balls. The proposed estimation algorithm implements a truncation to estimate the wavelet coefficients, in addition to the conventional hard-thresholds. A limited simulations study confirms theoretical claims of the paper. 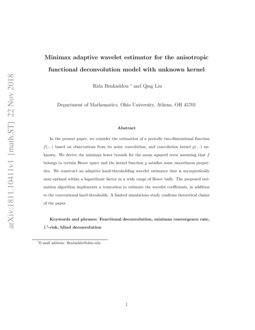 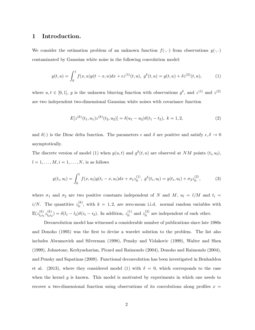 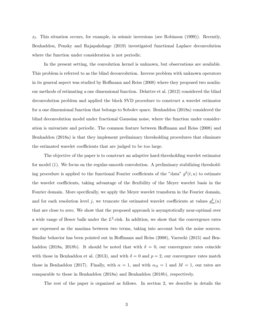 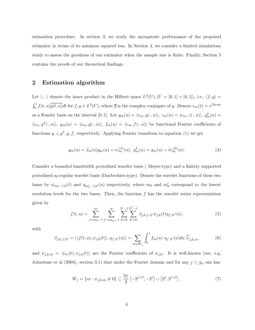 We consider the estimation problem of an unknown function f(⋅,⋅) from observations y(⋅,⋅)

contaminated by Gaussian white noise in the following convolution model:

where u,t∈[0,1], g is the unknown blurring function with observations gδ, and z(1) and z(2) are two independent two-dimensional Gaussian white noises with covariance function

where σ1 and σ2 are two positive constants independent of N and M, ul=l/M and ti=i/N. The quantities z(k)li, with k=1,2

Deconvolution model has witnessed a considerable number of publications since late 1980s and Donoho (1995) was the first to devise a wavelet solution to the problem. The list also includes Abramovich and Silverman (1998), Pensky and Vidakovic (1999), Walter and Shen (1999), Johnstone, Kerkyacharian, Picard and Raimondo (2004), Donoho and Raimondo (2004), and Pensky and Sapatinas (2009). Functional deconvolution has been investigated in Benhaddou et al. (2013), where they considered model (1) with δ=0, which corresponds to the case when the kernel g is known. This model is motivated by experiments in which one needs to recover a two-dimensional function using observations of its convolutions along profiles x=xl. This situation occurs, for example, in seismic inversions (see Robinson (1999)). Recently, Benhaddou, Pensky and Rajapakshage (2019) investigated functional Laplace deconvolution where the function under consideration is not periodic.

In the present setting, the convolution kernel is unknown, but observations are available. This problem is referred to as the blind deconvolution. Inverse problem with unknown operators in its general aspect was studied by Hoffmann and Reiss (2008) where they proposed two nonlinear methods of estimating a one dimensional function. Delattre et al. (2012) considered the blind deconvolution problem and applied the block SVD procedure to construct a wavelet estimator for a one dimensional function that belongs to Sobolev space. Benhaddou (2018a) considered the blind deconvolution model under fractional Gaussian noise, where the function under consideration is univariate and periodic. The common feature between Hoffmann and Reiss (2008) and Benhaddou (2018a) is that they implement preliminary thresholding procedures that eliminate the estimated wavelet coefficients that are judged to be too large.

The objective of the paper is to construct an adaptive hard-thresholding wavelet estimator for model (1). We focus on the regular-smooth convolution. A preliminary stabilizing thresholding procedure is applied to the functional Fourier coefficients of the ”data” gδ(t,u) to estimate the wavelet coefficients, taking advantage of the flexibility of the Meyer wavelet basis in the Fourier domain. More specifically, we apply the Meyer wavelet transform in the Fourier domain, and for each resolution level j, we truncate the estimated wavelet coefficients at values gδm(u) that are close to zero. We show that the proposed approach is asymptotically near-optimal over a wide range of Besov balls under the L2-risk. In addition, we show that the convergence rates are expressed as the maxima between two terms, taking into account both the noise sources. Similar behavior has been pointed out in Hoffmann and Reiss (2008), Vareschi (2015) and Benhaddou (2018a, 2018b). It should be noted that with δ=0, our convergence rates coincide with those in Benhaddou et al. (2013), and with δ=0 and p=2, our convergence rates match those in Benhaddou (2017). Finally, with α=1, and with α1l=1 and M=1, our rates are comparable to those in Benhaddou (2018a) and Benhaddou (2018b), respectively.

The rest of the paper is organized as follows. In section 2, we describe in details the estimation procedure. In section 3, we study the asymptotic performance of the proposed estimator in terms of its minimax squared loss. In Section 4, we consider a limited simulations study to assess the goodness of our estimator when the sample size is finite. Finally, Section 5 contains the proofs of our theoretical findings.

Consider a bounded bandwidth periodized wavelet basis ( Meyer-type) and a finitely supported periodized s0-regular wavelet basis (Daubechies-type). Denote the wavelet functions of these two bases by ψm0−1,k(t) and ηm′0−1,k′(u) respectively, where m0 and m′0 correspond to the lowest resolution levels for the two bases. Then, the function f has the wavelet series representation given by

due to the fact that Meyer wavelets are band-limited, and the cardinality of Wj is |Wj|=4π⋅2j. If g were known, the problem would reduce to the regular deconvolution model studied in Benhaddou et al. (2013). However, since g is unknown and contaminated with gaussian white noise, a preliminary thresholding procedure is to be applied to provide the estimate of βj,k,j′,k′. Let us define the quantities

where κ is a positive constant independent of m and δ. Then, using (6) and (8), and by Plancherel formula, a truncated estimator for βj,k,j′,k′ is given by

Bear in mind that the above thresholding on the Fourier coefficients gδm(u) enables us to have a stable inversion. Now, define

Then, consider the hard-thresholding estimator for f(⋅,⋅) given by

where J and J′ will be determined later, and λjϵ,δ

will be chosen based on the variance of

^βω. Assumption A.1. Assume that the functional Fourier coefficients gm(u) of g(t,u) are uniformly bounded from below and above, that is, there exists positive constants v,C1 and C2, all independent of m and u, such that


The next step is to evaluate the variance of (9). Define for j≥m0 and positive constant ρ, the sets Ω1 and Ω2 such that

Now, to determine the choice of the thresholds λjϵ,δ, let us define the quantity

Hence, we choose our thresholds λjϵ,δ of the form

Finally, choose J and J′ such that

Notice that our choices of the threshold λjϵ,δ, and the finest resolution levels J and J′ do not depend on any unknown parameter, and therefore estimator (11) is adaptive. It remains to investigate how the estimator performs. Next, we evaluate the lower and upper bound for the L2-risk.

To construct minimax lower bounds for the L2-risk, we define the L2-risk over the set V as

where ∥g∥2 is the L2-norm of a function g and the infimum is taken over all possible estimators ~f of f. Assumption A.2. Let s∗i=si+12−1p,i=1,2. Assume that f(t,u) belongs to a two-dimensional Besov ball, and its wavelet coefficients βω satisfy

Before we derive the minimax upper bounds for the L2-risk, we first prove the next lemma which provides the large deviation inequalities for the wavelet coefficients estimators.

Then, the following statement is true.

Theorems 1 and 2 imply that, for the L2-risk, the estimator in (11) is asymptotically quasi-optimal within a logarithmic factor of ε or δ over a wide range of anisotropic Besov balls Bs1,s2p,q(A).

The convergence rates are expressed as a maxima between two terms, taking into account both noise sources. Similar behavior has been pointed out in Hoffmann and Reiss (2008), Vareschi (2015) and Benhaddou (2018a, 2018b). These rates depend on a delicate balance between the parameters of the Besov ball, smoothness of the convolution kernel ν and the noise parameters; ε and δ.

In this section, we carried out a limited simulation study in order to investigate the finite sample performance of our estimator. The first step though is to provide the sample equivalent to equations (4), (8), (9), (13)-(14) and (20)-(22). Indeed, apply the Fourier transform to (3) to obtain

Then, the discrete version of (9) is given by

In addition, equations (3) and (1) are equivalent by setting

The sets Ω1 and Ω2 are now of the form

and (18) has the sample counterpart

Finally, the threshold and the finest resolution levels are given by

The simulation was implemented based on the above equations. In particular, it was formatted through MATLAB using the Wavelab toolbox. Similar to Benhaddou, et al. (2013), degree 3 Meyer wavelets family and degree 6 Daubechies wavelets were utilized for the wavelet transform. We generated our data by equation (33) with testing kernel g(t,u)=0.5exp(−|t|(1+(u−0.5)2)), and with various testing functions f(t,u) and different combinations of values N, M and σ1, σ2. In particular, we generate f(t,u) from f(t,u)=f(t)f(u) with f(u) being a quadratic function (u−0.5)2 scaled to have a unit norm, and f(t) being the routinely used testing functions blip, bumps, heavy sine, and doppler. We rescale f(t,u) to have a unit norm. As noted in Benhaddou, et al. (2013), our method did not know that f(t,u) were generated by a product of two functions, thus can not take advantage of this information. For the choices of σ1 and σ2, they are dependent on the signal-to-noise ratio. In particular, σ1=||hm(ul)||R1, where hm(ul)=fm(ul)gm(ul), and R1 is the signal-to-noise ratio of the first equation in (33); and σ2=||gm(ul)||R2 where R2 is the signal-to-noise ratio of the second equation in (33). We used M=128,256 and N=512,1024. We evaluated the mean integrated square error (MISE) E||^f−f||2

of the functional deconvolution estimator. Figure 1 reports the averages of those errors over 100 simulation repetitions together with their standard deviations (in the parentheses).

This is because on Ω0, one has

On one hand, one has