We introduce Minimal Achievable Sufficient Statistic (MASS) Learning, a training method for machine learning models that attempts to produce minimal sufficient statistics with respect to a class of functions (e.g. deep networks) being optimized over. In deriving MASS Learning, we also introduce Conserved Differential Information (CDI), an information-theoretic quantity that - unlike standard mutual information - can be usefully applied to deterministically-dependent continuous random variables like the input and output of a deep network. In a series of experiments, we show that deep networks trained with MASS Learning achieve competitive performance on supervised learning, regularization, and uncertainty quantification benchmarks. 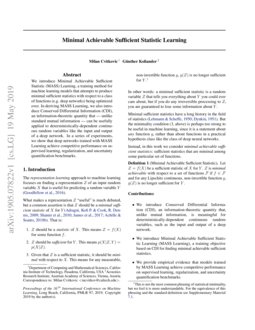 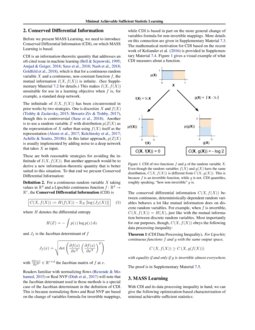 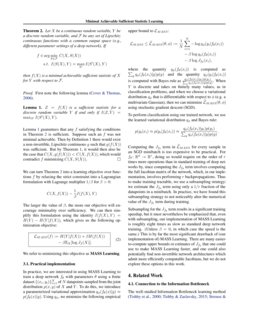 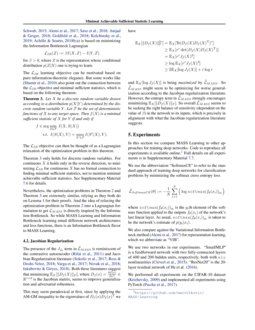 In other words: a minimal sufficient statistic is a random variable Z that tells you everything about Y you could ever care about, but if you do any irreversible processing to Z, you are guaranteed to lose some information about Y.

Minimal sufficient statistics have a long history in the field of statistics (Lehmann & Scheffe, 1950; Dynkin, 1951). But the minimality condition (3, above) is perhaps too strong to be useful in machine learning, since it is a statement about any function g

, rather than about functions in a practical hypothesis class like the class of deep neural networks.

Let Z=f(X) be a sufficient statistic of X for Y. Z is minimal achievable with respect to a set of functions F if f∈F and for any Lipschitz continuous, non-invertible function g, g(Z) is no longer sufficient for Y.

Before we present MASS Learning, we need to introduce Conserved Differential Information (CDI), on which MASS Learning is based.

CDI is an information-theoretic quantity that addresses an oft-cited issue in machine learning (Bell & Sejnowski, 1995; Amjad & Geiger, 2018; Saxe et al., 2018; Nash et al., 2018; Goldfeld et al., 2018), which is that for a continuous random variable X and a continuous, non-constant function f, the mutual information I(X,f(X)) is infinite. (See Supplementary Material 7.2 for details.) This makes I(X,f(X)) unsuitable for use in a learning objective when f is, for example, a standard deep network.

The infinitude of I(X,f(X)) has been circumvented in prior works by two strategies. One is discretize X and f(X) (Tishby & Zaslavsky, 2015; Shwartz-Ziv & Tishby, 2017), though this is controversial (Saxe et al., 2018). Another is to use a random variable Z with distribution p(Z|X) as the representation of X rather than using f(X) itself as the representation (Alemi et al., 2017; Kolchinsky et al., 2017; Achille & Soatto, 2018b). In this latter approach, p(Z|X) is usually implemented by adding noise to a deep network that takes X as input.

These are both reasonable strategies for avoiding the infinitude of I(X,f(X)). But another approach would be to derive a new information-theoretic quantity that is better suited to this situation. To that end we present Conserved Differential Information:

For a continuous random variable X taking values in Rd and a Lipschitz continuous function f:Rd→Rr, the Conserved Differential Information (CDI) is

where H denotes the differential entropy

and Jf is the Jacobian determinant of f

with ∂f(x)∂xT∈Rr×d the Jacobian matrix of f at x.

Readers familiar with normalizing flows (Rezende & Mohamed, 2015) or Real NVP (Dinh et al., 2017) will note that the Jacobian determinant used in those methods is a special case of the Jacobian determinant in the definition of CDI. This is because normalizing flows and Real NVP are based on the change of variables formula for invertible mappings, while CDI is based in part on the more general change of variables formula for non-invertible mappings. More details on this connection are given in Supplementary Material 7.3. The mathematical motivation for CDI based on the recent work of Koliander et al. (2016) is provided in Supplementary Material 7.4. Figure 1 gives a visual example of what CDI measures about a function.

f is invertible, C(X,f(X))=H(X), just like with the mutual information between discrete random variables. Most importantly for our purposes, though, C(X,f(X)) obeys the following data processing inequality:

For Lipschitz continuous functions f and g with the same output space,

with equality if and only if g is invertible almost everywhere.

The proof is in Supplementary Material 7.5.

With CDI and its data processing inequality in hand, we can give the following optimization-based characterization of minimal achievable sufficient statistics:

then f(X) is a minimal achievable sufficient statistic of X for Y with respect to F.

Z=f(X) is a sufficient statistic for a discrete random variable Y if and only if I(Z,Y)=maxS′I(S′(X),Y).

Lemma 1 guarantees that any f satisfying the conditions in Theorem 2 is sufficient. Suppose such an f was not minimal achievable. Then by Definition 1 there would exist a non-invertible, Lipschitz continuous g such that g(f(X)) was sufficient. But by Theorem 1, it would then also be the case that C(X,g(f(X)))<C(X,f(X)), which would contradict f minimizing C(X,S(X)). ∎

We can turn Theorem 2 into a learning objective over functions f by relaxing the strict constraint into a Lagrangian formulation with Lagrange multiplier 1/β for β>0:

The larger the value of β, the more our objective will encourage minimality over sufficiency. We can then simplify this formulation using the identity I(f(X),Y)=H(Y)−H(Y|f(X)), which gives us the following optimization objective:

We refer to minimizing this objective as MASS Learning.

In practice, we are interested in using MASS Learning to train a deep network fθ with parameters θ using a finite dataset {(xi,yi)}Ni=1 of N

datapoints sampled from the joint distribution

p(x,y) of X and Y. To do this, we introduce a parameterized variational approximation qϕ(fθ(x)|y)≈p(fθ(x)|y). Using qϕ, we minimize the following empirical upper bound to LMASS:

To perform classification using our trained network, we use the learned variational distribution qϕ and Bayes rule:

Computing the Jfθ term in ˆLMASS for every sample in an SGD minibatch is too expensive to be practical. For fθ:Rd→Rr, doing so would require on the order of r times more operations than in standard training of deep networks by, since computing the Jfθ term involves computing the full Jacobian matrix of the network, which, in our implementation, involves performing rbackpropagations. Thus to make training tractable, we use a subsampling strategy: we estimate the Jfθ term using only a 1/r fraction of the datapoints in a minibatch. In practice, we have found this subsampling strategy to not noticeably alter the numerical value of the Jfθ term during training.

Subsampling for the Jfθ term results in a significant training speedup, but it must nevertheless be emphasized that, even with subsampling, our implementation of MASS Learning is roughly eight times as slow as standard deep network training. (Unless β=0, in which case the speed is the same.) This is by far the most significant drawback of (our implementation of) MASS Learning. There are many easier-to-compute upper bounds or estimates of Jfθ that one could use to make MASS Learning faster, and one could also potentially find non-invertible network architectures which admit more efficiently computable Jacobians, but we do not explore these options in this work.

4.1 Connection to the Information Bottleneck

for β>0, where Z is the representation whose conditional distribution p(Z|X) one is trying to learn.

The LIB learning objective can be motivated based on pure information-theoretic elegance. But some works like (Shamir et al., 2010) also point out the connection between the LIB objective and minimal sufficient statistics, which is based on the following theorem:

The LIB objective can then be thought of as a Lagrangian relaxation of the optimization problem in this theorem.

is reminiscent of the contrastive autoencoder

This may seem paradoxical at first, since by applying the AM-GM inequality to the eigenvalues of

and EX[logJf(X)] is being maximized by ˆLMASS. So ˆLMASS might seem to be optimizing for worse generalization according to the Jacobian regularization literature. However, the entropy term in ˆLMASS strongly encourages minimizing EX[∥Df(X)∥F]. So overall ˆLMASS seems to be seeking the right balance of sensitivity (dependent on the value of β) in the network to its inputs, which is precisely in alignment with what the Jacobian regularization literature suggests.

In this section we compare MASS Learning to other approaches for training deep networks. Code to reproduce all experiments is available online.222https://github.com/mwcvitkovic/MASS-Learning Full details on all experiments is in Supplementary Material 7.7.

We also compare against the Variational Information Bottleneck method (Alemi et al., 2017) for representation learning, which we abbreviate as “VIB”.

We use two networks in our experiments. “SmallMLP” is a feedforward network with two fully-connected layers of 400 and 200 hidden units, respectively, both with elu nonlinearities (Clevert et al., 2015). “ResNet20” is the 20-layer residual network of He et al. (2016).

We performed all experiments on the CIFAR-10 dataset (Krizhevsky, 2009)

and implemented all experiments using PyTorch

Classification accuracies for the SmallMLP network are shown in Table 1, and for the ResNet20 network in Table 2. For the SmallMLP network, MASS Learning performs comparably to SoftmaxCE and VIB, but does not appear to offer any performance benefits. For the larger ResNet20 network, the results show that while MASS Learning outperforms SoftmaxCE and VIB training, these improvements do not seem to be due to the MASS loss ˆLMASS itself, since the same performance improvements are obtained even when the H(f(X)) and EX[logJf(X)] terms in the MASS loss are set to 0 (i.e. the case when β=0).

This suggests that it is the use of the variational distribution qϕ(fθ(x)|y) to compute the output of the network, rather than the MASS Learning approach, that is providing the benefit. This is an interesting finding, and worthy of further study, but does not suggest an advantage to using the full MASS Learning method if one is concerned with accuracy or regularization.

We also evaluate the ability of networks trained by MASS Learning to properly quantify their uncertainty about their predictions. We assess uncertainty quantification in two ways: using proper scoring rules (Lakshminarayanan et al., 2017), which are scalar measures of how well a network’s predictive distribution p(y|fθ(x)) is calibrated, and by assessing performance on an out-of-distribution (OOD) detection task.

Tables 3 through 8 show the uncertainty quantification performance of networks according to two proper scoring rules: the Negative Log Likelihood (NLL) and the Brier Score. The entropy and test accuracy of the predictive distributions are also given, for reference.

For the SmallMLP network in tables 3, 4, and 5, VIB provides the best combination of high accuracy and low NLL and Brier score across all sizes of training set. For the ResNet20 network in tables 6, 7, and 8, MASS Learning provides the best combination of accuracy and proper scoring rule performance. The NLL values for ResNet20 strongly indicate — as our theory suggests — that MASS Learning with larger β leads to better calibrated network predictions. The Brier Score values show the same trend, though not decisively. Thus as measured by proper scoring rules, MASS Learning can significantly improve the calibration of a network’s predictions while simultaneously improving its accuracy.

Tables 9 through 14 show metrics for performance on an OOD detection task where the network predicts not just the class of the input image, but whether the image is from its training distribution (CIFAR-10 images) or from another distribution (SVHN images (Netzer et al., 2011)). Following Hendrycks & Gimpel (2017) and Alemi et al. (2018), the metrics we report for this task are the Area under the ROC curve (AUROC) and Average Precision score (APR). APR depends on whether the network is tasked with identifying in-distribution or out-of-distribution images; we report values for both cases as APR In and APR Out, respectively.