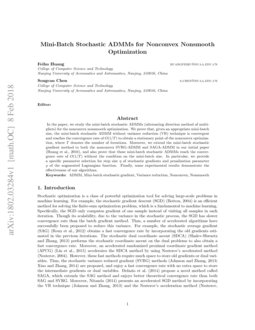 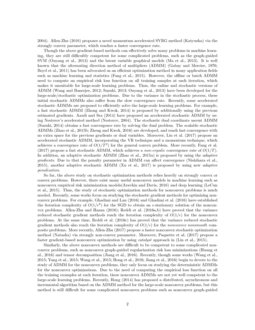 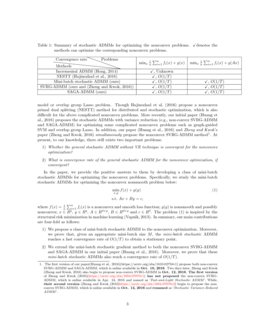 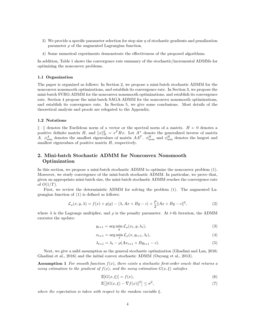 [2]) is an efficient method for solving the following optimization problem, which is a fundamental to machine learning,

n is large, even the first-order methods become computationally burdensome due to their per-iteration complexity of O(nd). While SGD only computes gradient of one sample instead of all samples in each iteration, thus, it has only per-iteration complexity of O(d). Despite its scalability, due to the existence of variance in stochastic process, the stochastic gradient is much noisier than the batch gradient. Thus, the step size has to be decreased gradually as stochastic learning proceeds, leading to slower convergence than the batch method. Recently, a number of accelerated algorithms have successfully been proposed to reduce this variance. For example, stochastic average gradient (SAG [3]

Though the above methods can effectively solve many problems in machine learning, they are still difficultly to be competent for some complicated problems with the nonseparable and nonsmooth regularization function as follows

where A∈Rd×p is a given matrix, f(x)=1n∑ni=1fi(x) denotes the loss function, and g(x) denotes the regularization function. With regard to g(⋅), we are interested in a sparsity-inducing regularization functions, e.g. ℓ1-norm and nuclear norm. The problem (2) includes the graph-guided fuzed Lasso [16], the overlapping group Lasso[17], and generalized Lasso [18]. It is well known that the alternating direction method of multipliers (ADMM [19, 20, 21]) is an efficient optimization method for the problem (2). Specifically, we can use auxiliary variable y=Ax to make the problem (2) be suitable for the general ADMM form. When sample size n is large, due to the need of computing the empirical risk loss function on all training samples at each iteration, the offline or batch ADMM is unsuitable for large-scale learning problems. Thus, the online and stochastic versions of ADMM [22, 23, 24] have been successfully developed for the large-scale problems. Due to the existence of variance in the stochastic process, these stochastic ADMMs also suffer from the slow convergence rate. Recently, some accelerated stochastic ADMMs are effectively proposed to reduce this variance. For example, SAG-ADMM [25] is proposed by additionally using the previous estimated gradients. An accelerated stochastic ADMM [26] is proposed by using Nesterov’s accelerated method [6]. SDCA-ADMM [27] obtains linearly convergence rate for the strong problem by solving its dual problem. SCAS-ADMM [28] and SVRG-ADMM [29] are developed, and reach the fast convergence rate with no extra space for the previous gradients or dual variables. Moreover, [30] proposes an accelerated SVRG-ADMM by using the momentum accelerated technique. More recently, [31] proposes a fast stochastic ADMM, which achieves a non-ergodic convergence rate of O(1/T) for the convex problem. In addition, an adaptive stochastic ADMM [32] is proposed by using the adaptive gradients. Due to that the penalty parameter in ADMM can affect convergence [33], another adaptive stochastic ADMM [34] is proposed by using the adaptive penalty parameters.

So far, the above study on stochastic optimization methods relies heavily on strongly convex or convex problems. However, there exist many useful nonconvex models in machine learning such as nonconvex empirical risk minimization models[35]

Similarly, the above nonconvex methods are difficult to be competent to some complicated nonconvex problems, such as nonconvex graph-guided regularization risk loss minimizations [1]

[46]. Recently, some works [47, 48, 49, 50, 46] have begun to study the ADMM method for the nonconvex optimization, but they only focus on studying the deterministic ADMMs for the nonconvex optimization. Due to the need of computing the empirical loss function on all the training examples at each iteration, these nonconvex ADMMs are not yet well competent to the large-scale learning problems. Recently, [13] has proposed a distributed, asynchronous and incremental algorithm based on the ADMM method for the large-scale nonconvex problems, but this method is difficult for the nonconvex problem (2) with the nonseparable and nonsmooth regularizers such as graph-guided fused lasso and overlapping group lasso. A nonconvex primal dual splitting (NESTT [14]) method is proposed for the distributed and stochastic optimization, but it is also difficult for the nonconvex problem (2). More recently, our initial manuscript [1] proposes the stochastic ADMMs with variance reduction (e.g., nonconvex SVRG-ADMM and nonconvex SAGA-ADMM) for optimizing these nonconvex problems with some complicated structure regularizers such as graph-guided fuzed Lasso, overlapping group Lasso, sparse plus low-rank penalties. In addition, our initial manuscript [1] and Zheng and Kwok’s paper [15] simultaneously propose the nonconvex SVRG-ADMM method111 The first version of our manuscript[1](https://arxiv.org/abs/1610.02758v1) proposes both non-convex SVRG-ADMM and SAGA-ADMM, which is online available in Oct. 10, 2016 . The first version of [15] (https://arxiv.org/abs/1604.07070v1) only proposes the convex SVRG-ADMM, which is online available in Apr. 24, 2016 and named as ’Fast-and-Light Stochastic ADMM’. While, the second version of [15] (https://arxiv.org/abs/1604.07070v2) adds the non-convex SVRG-ADMM, which is online available in Oct. 12, 2016 and renamed as ’Stochastic Variance-Reduced ADMM’. . At present, to our knowledge, there still exist two important problems needing to be addressed:

where f(x)=1n∑ni=1fi(x), each fi(x) is a nonconvex and smooth loss function, g(y) is nonsmooth and possibly nonconvex, and A∈Rq×d, B∈Rq×p and c∈Rq denote the given matrices and vector, respectively. The problem (3) is inspired by the structural risk minimization in machine learning [51]. In summary, our main contributions are four-fold as follows:

In addition, Table I shows the convergence rate summary of the stochastic/incremental ADMMs for optimizing the nonconvex problems.

∥⋅∥ denotes the Euclidean norm of a vector or the spectral norm of a matrix. Ip denotes an p

H≻0 denotes a positive definite matrix H, and ∥x∥2H=xTHx. Let A+ denote the generalized inverse of matrix A. ϕAmin

denotes the smallest eigenvalues of matrix

AAT. ϕHmax and ϕHmin denotes the largest and smallest eigenvalues of positive matrix H, respectively. The other notations used in this paper is summarized as follows: ~L=L+1, ϕH=(ϕHmin)2+20(ϕHmax)2, ζ=5(L2η2+(ϕHmax)2)ϕAminη2, and ζ1=5(ϕHmax)2ϕAminη2.

First, we review the deterministic ADMM for solving the problem (3). The augmented Lagrangian function of (3) is defined as follows:

where λ is the Lagrange multiplier, and ρ is the penalty parameter. At t-th iteration, the ADMM executes the update:

Next, we give a mild assumption, as in the general stochastic optimization [37, 38] and the initial convex stochastic ADMM [24].

where the expectation is taken with respect to the random variable

Let M be the size of mini-batch I, and ξI={ξ1,ξ2,⋯,ξM} denotes a set of i.i.d. random variables, and the stochastic gradient is given by

In the stochastic ADMM algorithm, we can update y and λ by (5) and (7), respectively, as in the deterministic ADMM. However, to update the variable x, we will define an approximated function of the form:

When ATA is large, computing (Hη+ρATA)−1 is expensive, and storage of this matrix may still be problematic. To avoid them, we can use the inexact Uzawa method [52] to linearize the last term in (2). In other words, we set H=rI−ρηATA with

to ensure H⪰I. Then we have

Finally, we give the algorithmic framework of the mini-batch stochastic ADMM (STOC-ADMM) in Algorithm 1.

In the subsection, we study the convergence and iteration complexity of the nonconvex mini-batch STOC-ADMM. First, we give some mild assumptions as follows:

For smooth function f(x), its gradient is Lipschitz continuous with the constant L>0, such that

and this is equivalent to

Matrix A has full row rank.

For ϵ>0, the point (x∗,y∗,λ∗) is said to be an ϵ-stationary point of the nonconvex problem (3) if it holds that

Note that the above inequalities (16) are equivalent to , where

where L(x,y,λ)=f(x)+g(y)−⟨λ,Ax+By−c⟩ is the Lagrangian function of (3). In the following, based the above assumptions and definition, we study the convergence and iteration complexity of the mini-batch stochastic ADMM.

Suppose the sequence {xt,yt,λt}Tt=1 is generated by Algorithm 1. The following inequality holds

A detailed proof of Lemma 1 is provided in Appendix A.1. Lemma 1 gives the upper bound of E∥λt+1−λt∥2. Given a sequence {xt,yt,λt}Tt=1 generated from Algorithm 1, then we define an useful sequence {Ψt}Tt=1 as follows:

and suppose the parameters ρ and η, respectively, satisfy

Suppose the sequence {xt,yt,λt}Tt=1 is generated by Algorithm 1. Under the same conditions as in Lemma 2, the sequence {Ψt}Tt=1 has a lower bound.

A detailed proof of Lemma 3 is provided in Appendix A.3. Lemma 3 gives a lower bound of the sequence {Ψt}Tt=1.

In the subsection, we propose a mini-batch nonconvex stochastic variance reduced gradient ADMM (SVRG-ADMM) to solve the problem (3), which uses a multi-stage strategy to progressively reduce the variance of stochastic gradients.

A detailed proof of Theorem 4 is provided in Appendix B.1.

In the subsection, we study the convergence and iteration complexity of the mini-batch nonconvex SVRG-ADMM. First, we give an upper bound of E∥λs+1t+1−λs+1t∥2.

Suppose the sequence {(xst,yst,λst)mt=1}Ss=1 is generated by Algorithm 2. The following inequality holds

A detailed proof of Lemma 5 is provided in Appendix B.2. Given the sequence {(xst,yst,λst)mt=1}Ss=1 generated from Algorithm 2, then we define an useful sequence {(Φst)mt=1}Ss=1 as follows:

and suppose the parameters ρ and η, respectively, satisfy

and the sequence {(Φst)mt=1}Ss=1 monotonically decreases.

A detailed proof of Lemma 6 is provided in Appendix B.3. Lemma 6 shows that the sequence {(Φst)mt=1}Ss=1 monotonically decreases. Moreover, (24) provides a specific parameter selection on the step size η and the penalty parameter ρ in Algorithm 2.

In the following, we will analyze the convergence and iteration complexity of the nonconvex SVRG-ADMM based on the above lemmas.

In the subsection, we propose a mini-batch nonconvex stochastic average gradient ADMM (SAGA-ADMM) by additionally using the old gradients estimated in the previous iteration, which is inspired by the SAGA method [9].

The algorithmic framework of the SAGA-ADMM is given in Algorithm 3. In Algorithm 3, the stochastic gradient ^∇f(xt)=1M∑it∈It(∇fit(xt)−∇fit(zt<span class="mjx-texatom" style=""