Channel interpolation is an essential technique for providing high-accuracy estimation of the channel state information (CSI) for wireless systems design where the frequency-space structural correlations of MIMO channel are typically hidden in matrix or tensor forms. In this letter, a modified extreme learning machine (ELM) that can process tensorial data, or ELM model with tensorial inputs (TELM), is proposed to handle the channel interpolation task. The TELM inherits many good properties from ELMs. Based on the TELM, the Tucker decomposed extreme learning machine (TDELM) is proposed for further improving the performance. Furthermore, we establish a theoretical argument to measure the interpolation capability of the proposed learning machines. Experimental results verify that our proposed schemes can achieve comparable mean squared error (MSE) performance against the traditional ELMs but with 15 running time, and outperform the other methods for a 20 for channel interpolation. 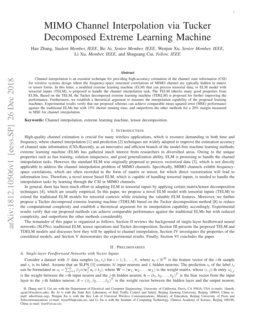 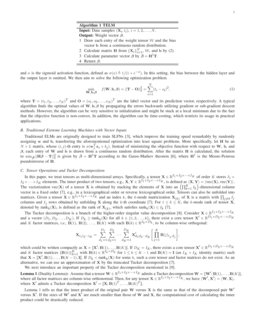 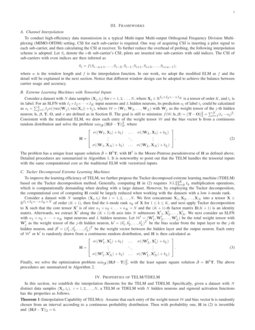 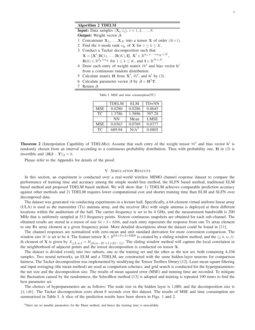 High-quality channel estimation is crucial for many wireless applications, which is resource demanding in both time and frequency, where channel interpolation [1] and prediction [2]

techniques are widely adopted to improve the estimation accuracy of channel state information (CSI).Recently, as an innovative and efficient branch of the model-free machine learning methods, extreme learning machine (ELM) has gathered much interest from researchers in diversified areas. Owing to the unique properties such as fast training, solution uniqueness, and good generalization ability, ELM is promising to handle the channel interpolation tasks. However, the standard ELM was originally proposed to process vectorized data

[3], which is not directly applicable to address the channel interpolation problem of MIMO channels. Specifically, MIMO channels exhibit frequency-space correlations, which are often recorded in the form of matrix or tensor, for which direct vectorization will lead to information loss. Therefore, a novel tensor based ELM, which is capable of handling tensorial inputs, is needed to handle the interpolation tasks by learning through the CSI in MIMO channels.

In general, there has been much effort in adapting ELM to tensorial inputs by applying certain matrix/tensor decomposition techniques[4], which are usually empirical. In this paper, we propose a novel ELM model with tensorial inputs (TELM) to extend the traditional ELM models for tensorial contexts while retaining the valuable ELM features. Moreover, we further propose a Tucker decomposed extreme learning machine (TDELM) based on the Tucker decomposition method [8] to reduce the computational complexity and establish a theoretical argument for its interpolation capability accordingly. Experimental results verify that our proposed methods can achieve comparable performance against the traditional ELMs but with reduced complexity, and outperform the other methods considerably.

The remainder of this paper is organized as follows. Section II

III presents the proposed TELM and TDELM models and discusses how they will be applied to channel interpolation, Section IV investigates the properties of the considered models, and Section V demonstrates the experimental results. Finally, Section VI concludes the paper.

Consider a dataset with N data samples (xi,ti) for i=1,2,…,N, where xi∈RM is the feature vector of the i-th sample and ti is its label. Assume that an SLFN [3] contains M

L hidden neurons. The prediction oi of the label ti can be formulated as oi=∑Lj=1βjσ(wTjxi+bj), where W=(w1,w2,…,wL) is the weight matrix, whose (i,j)-th entry wi,j is the weight between the i-th input neuron and the j-th hidden neuron; b=(b1,b2,…,bL)T

is the bias vector from the input layer to the

j-th hidden neuron; β=(β1,β2,…,βL)T is the weight vector between the hidden layer and the output neuron; and σ

is the sigmoid activation function, defined as

σ(x)≜1/(1+e−x). In this setting, the bias between the hidden layer and the output layer is omitted. We then aim to solve the following optimization problem

where T=(t1,t2,…,tN)T and O=(o1,o2,…,oN)T are the label vector and its prediction vector, respectively. A typical algorithm finds the optimal values of W,b,β by propagating the errors backwards utilizing gradient or sub-gradient descent methods. However, the algorithm can be very sensitive to initialization and might be stuck at a local minimum due to the fact that the objective function is non-convex. In addition, the algorithm can be time-costing, which restricts its usage in practical applications.

Traditional ELMs are originally designed to train SLFNs[3], which improve the training speed remarkably by randomly assigning w and b, transferring the aforementioned optimization into least square problems. More specifically, let H be an N×L matrix, whose (i,j)-th entry is σ(wTjxi+bj). Instead of minimizing the objective function with respect to W, b, and β, each entry of W and b is drawn from a continuous random distribution. After the matrix H is calculated, the solution to minβ||Hβ−T||22 is given by ^β=H†T according to the Gauss-Markov theorem [6], where H† is the Moore-Penrose pseudoinverse of H.

In this paper, we treat tensors as multi-dimensional arrays. Specifically, a tensor X∈RI1×I2×⋯×IK of order K stores I1×I2×⋯×IK elements. The inner product of two tensors, e.g., X,Y∈RI1×I2×⋯×IK, is defined as ⟨X,Y⟩=⟨vec(X),% vec(Y)⟩. The vectorization vec(X) of a tensor X is obtained by stacking the elements of X into an (∏Kk=1Ik)-dimensional column vector in a fixed order [7], e.g., in a lexicographical order or reverse lexicographical order. Tensors can also be unfolded into matrices. Given a tensor X∈RI1×I2×⋯×IK and an index k, the k-mode matricization X(k) of X is a matrix with ∏j≠kIj columns and Ij rows obtained by unfolding X along the k-th coordinate[7]. For 1≤k≤K, the k-mode rank of tensor X, denoted by rankk(X), is defined as the rank of X(k), which satisfies rankk(X)≤Ik[7].

We next introduce an important property of the Tucker decomposition mentioned in [9].

Lemma 1 tells us that the inner product of the original pair W versus X is the same as that of the decomposed pair W′ versus X′. If the sizes of W′ and X′ are much smaller than those of W and X, the computational cost of calculating the inner product could be drastically reduced.

To conduct high-efficiency data transmission in a typical Multi-input Multi-output Orthogonal Frequency Division Multiplexing (MIMO-OFDM) setting, CSI for each sub-carrier is required. One way of acquiring CSI is inserting a pilot signal to each sub-carrier, and then calculating the CSI at receiver. To further reduce the overhead of probing, the following interpolation scheme is adopted. Let Si denote the i

where w is the window length and f is the interpolation function. In our work, we adopt the modified ELM as f and the detail will be explained in the next section. Notice that different window design can be adopted to achieve the balance between carrier usage and accuracy.

Consider a dataset with N data samples (Xi,ti) for i=1,2,…,N, where Xi∈RI1×I2×⋯×IK is a tensor of order K, and ti is its label. For an SLFN with I1×I2×⋯×IK input neurons and L hidden neurons, its prediction oi of label ti could be calculated as oi=∑Lj=1βjσ(⟨vec(Wj),vec(Xi)⟩+bj), where W=(W1,W2,…,WL) with Wj as the weight tensor of the j-th hidden neuron; b, β, T, O, and σ are defined as in Section II. The goal is still to minimize f(W,b,β)=||T−O||22=∑Ni=1(ti−oi)2. Consistent with the traditional ELM, we draw each entry of the weight tensor W and the bias vector b from a continuous random distribution and solve the problem minβ||Hβ−T||22, where

The problem has a unique least square solution ^β=H†T, with H† is the Moore-Penrose pseudoinverse of H as defined above. Detailed procedures are summarized in Algorithm 1. It is noteworthy to point out that the TELM handles the tensorial inputs with the same computational cost as the traditional ELM with vectorized inputs.

Finally, we solve the optimization problem minβ||Hβ−T||22, with the least square square solution ^β=H†T. The above procedures are summarized in Algorithm 2.

In this section, we establish the interpolation theorems for the TELM and TDELM. Specifically, given a dataset with N distinct data samples (Xi,ti), i=1,2,…,N, a TELM or TDELM with N hidden neurons and sigmoid activation functions has the properties as follows.

is randomly chosen from an interval according to a continuous probability distribution. Then with probability one,

Assume that each entry of the weight tensor W′ and bias vector b′ is randomly chosen from an interval according to a continuous probability distribution. Then with probability one, H in (3) is invertible and ||Hβ−T||2=0.

Please refer to the Appendix for details of the proof.

In this section, an experiment is conducted over a real-world wireless MIMO channel response dataset to compare the performance of training time and accuracy among the simple model-free method, the SLFN based method, traditional ELM based method and proposed TDELM based method. We will show that: 1) TDELM achieves comparable prediction accuracy against other methods and 2) TDELM requires lower computational cost and shorter training time than ELM and SLFN over decomposed data.

The dataset was generated via conducting experiments in a lecture hall. Specifically, a 64-element virtual uniform linear array (ULA) is used as the transmitter (Tx) antenna array, and the receiver (Rx) with single antenna is deployed at three different locations within the auditorium of the hall. The carrier frequency is set to be 4 GHz, and the measurement bandwidth is 200 MHz that is uniformly sampled at 513 frequency points. Sixteen continuous snapshots are obtained for each sub-channel. The obtained results are stored in a tensor of size 64×3×8208, and each entry represents the response from one Tx array element to one Rx array element at a given frequency point. More detailed descriptions about the dataset could be found in [11].

The channel responses are normalized with zero-mean and unit standard derivation for more convenient comparison. The window size W is set to be 4. The feature tensor X∈R64×3×4×8208 is created by a sliding window method, and the (j,k,w,l)-th element of X is given by Xj,k,w,l=Hjk(w−W+1+2(l−1)). The sliding window method will capture the local correlation in the neighborhood of adjacent points and the tensor decomposition is conducted on tensor X.

The dataset is divided evenly into two subsets, one as the training set and the other as the test set, both containing 4,104 samples. Two neural networks, an ELM and a TDELM, are constructed with the same hidden-layer neurons for comparison fairness. The Tucker decomposition was implemented by modifying the Tensor Toolbox library [12]

. Least mean square filtering and input averaging (the mean method) are used as comparison schemes, and grid search is conducted for the hyperparameters: the net size and the decomposition size. The results of mean squared error (MSE) and running time are recorded. To mitigate the fluctuation caused by the randomness, the SelectBest method

[13] is adopted and training is repeated 100 times to find the best parameter set.

The choices of hyperparameters are as follows: The node size in the hidden layer is 1,080, and the decomposition size is {2,128}. The Tucker decomposition costs about 6 seconds over this dataset. The results of MSE and time consumption are summarized in Table I. A slice of the prediction results have been shown in Figs. 1 and 2.

It is clear that the TDELM is performing best, also being reasonably fast. From Fig. 2, it is shown that TDELM achieved consistent gains compared to ELM and NN. In addition, an instance of the curve is shown in Fig.1, where the blue line and yellow line denote the real value and the prediction value, respectively. It can be seen that in the area depicted by the orange circle, other methods have visible amount of errors, while TDELM still follows the curve pretty well. Another interesting observation is, although TDELM has better accuracy than ELM, the TD+NN scheme is the worst. This not only shows that TDELM can work better than ELM, but also implies that the gain is from both the decomposition and the fact of using correlating learning machines for prediction.

In this paper, we have proposed an extreme learning machine with tensorial inputs (TELM) and a Tucker decomposed extreme learning machine (TDELM) to handle the channel interpolation tasks. Moreover, we have established a theoretical argument for the interpolation capability of TDELM. The experimental results verified that our proposed models can achieve comparable performance against the traditional ELM but with reduced complexity, and outperform the other methods considerably in terms of the channel interpolation accuracy.