In recent years, a significant amount of attention has been paid to solve partial differential equations (PDEs) by deep learning. For example, deep Galerkin method (DGM) uses the PDE residual in the least-squares sense as the loss function and a deep neural network (DNN) to approximate the PDE solution. In this work, we propose a deep mixed residual method (MIM) to solve PDEs with high-order derivatives. In MIM, we first rewrite a high-order PDE into a first-order system, very much in the same spirit as local discontinuous Galerkin method and mixed finite element method in classical numerical methods for PDEs. We then use the residual of first-order system in the least-squares sense as the loss function, which is in close connection with least-squares finite element method. For aforementioned classical numerical methods, the choice of trail and test functions is important for stability and accuracy issues in many cases. MIM shares this property when DNNs are employed to approximate unknowns functions in the first-order system. In one case, we use nearly the same DNN to approximate all unknown functions and in the other case, we use totally different DNNs for different unknown functions. In most cases, MIM provides better approximations (not only for high-derivatives of the PDE solution but also for the PDE solution itself) than DGM with nearly the same DNN and the same execution time, sometimes by more than one order of magnitude. When different DNNs are used, in many cases, MIM provides even better approximations than MIM with only one DNN, sometimes by more than one order of magnitude. Therefore, we expect MIM to open up a possibly systematic way to understand and improve deep learning for solving PDEs from the perspective of classical numerical analysis. 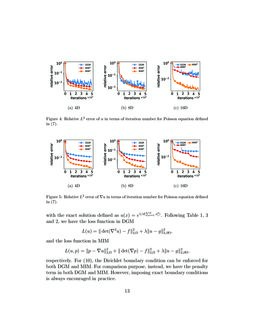 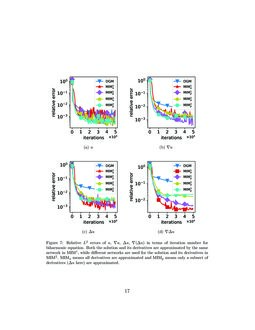 . Solving these equations is far out of the capability of classical numerical methods due to the curse of dimensionality, i.e., the number of unknowns grows exponentially fast as the dimension increases.

Typically, deep learning solves a PDE in the following way. For the given PDE, the loss function is modeled as the equation residual in the least-squares sense Sirignano and Spiliopoulos (2018) or the variational form if exists E and Yu (2018). ResNet is often used as the network architecture He et al. (2015)

In this work, we propose a deep mixed residual method (MIM) for solving high-order PDEs. In the modeling stage, by rewriting a given PDE into a first-order system, we obtain a larger problem in the sense that both the PDE solution and its high-order derivatives are unknown functions to be approximated. This has analogs in classical numerical methods, such as local discontinuous Galerkin method Cockburn et al. (2000) and mixed finite element method Boffi et al. (2013)

. Compared to DGM, there are two more degrees of freedom in MIM:

These two degrees of freedom allow MIM to produce better approximations over DGM in all examples, including Poisson equation, Monge-Ampére equation, biharmonic equation, and Korteweg-de Vries (KdV) equation. In particular, MIM provides better approximations not only for the high-order derivatives but also for the PDE solution itself. It is worth mentioning that the usage of mixed residual in deep learning was first introduced for surrogate modeling and uncertainty quantification of a second-order elliptic equation Zhu et al. (2019) and was later adopted in a deep domain decomposition method Li et al. (2019).

The paper is organized as follows. In Section 2, we introduce MIM and DGM (for comparison purpose). In Section 3, numerical results for four types of high-order PDEs are provided. Conclusions and discussions are drawn in Section 4.

In this section, we introduce MIM and discuss its difference with DGM in terms of loss function and neural network structure.

where ∂Ω denotes the boundary of Ω. In DGM, the loss function is defined as the PDE residual in the least-squares sense

where λ1 and λ2 are penalty parameters given a priori. These three terms in (2) measure how well the approximate solution satisfies the PDE, the initial condition and the boundary condition, respectively.

In the absence of temporal derivatives, (1) reduces to

and the corresponding loss function in DGM becomes

ResNet He et al. (2015) is used to approximate the PDE solution and its high-order derivatives. It consists of m blocks in the following form

) is called the shortcut connection or residual connection. Each block has two linear transforms, two activation functions, and one shortcut; see Figure

1 for demonstration. Such a structure can automatically solve the notorious problem of vanishing/exploding gradient He et al. (2016).

Since x is in Rd rather than Rn

by a zero vector to get the network input

s0. A linear transform can be used as well without much difference. Meanwhile, sm has n outputs which cannot be directly used for the PDE solution and its derivatives employed in the loss function. Therefore, a linear transform T is applied to sm to transform it into a suitable dimension. Let {θ} be the whole set of parameters which include parameters in ResNet ({W1,k,b1,k,W2,k,b2,k}mk=1) and parameters in the linear transform T. Note that the output dimension in MIM depends on both the PDE problem and the mixed residual loss. We illustrate network structures for biharmonic equation as an example in Figure 2.

From Figure 2, we see that DGM has only 1 output, MIM1a has 2d+2 outputs, and MIM1p has 2 outputs. In Figure 3, we illustrate networks structures of MIM1 and MIM2 for Poisson equation. In MIM2, two DNNs are used: one to approximate the solution and the other one to approximate its derivatives. It is clear from Figure 2 that network structures in DGM and MIM1 only differ in the output layer and thus they have comparable numbers of parameters to be optimized. To be precise, we calculate their numbers of parameters in Table 5, from which one can see the number of parameters in DGM and MIM1 is close. The number of parameters in MIM2 is nearly double for Poisson equation, Monge-Ampére equation and biharmonic equation (MIM2p), tripled for KdV equation, and quadrupled for biharmonic equation (MIM2a), respectively. In Section 3, from numerical results, we observe a better performance of MIM1 for all four equations, not only for derivatives of the PDE solution, but also for the solution itself.

For completeness, we also briefly introduce stochastic gradient descent method. For the loss function defined in (3

), we generate two sets of points uniformly distributed over

where α is the learning rate chosen to be 1e−3 here. |Ω| and |∂Ω| are measures of Ω and ∂Ω, respectively. uθ is the DNN approximation of PDE solution parameterized by {θ}. Sampling points {xi}Ni=1 and {^xj}Mj=1 are updated at each iteration. In implementation, we use ADAM optimizer Kingma and Ba (2014) and automatic differentiation Paszke et al. (2017)

for derivatives in PyTorch.

with the exact solution u(x)=∑dk=1cos(πxk). The neural network structure in DGM is the same as that for biharmonic equation shown in Figure 2. Following Table 1 and Table 2, we use the loss function for (7)

Therefore, for DNNs in Figure 3, the loss function in MIM can be simplified as

Figure 4 and Figure 5 plot training processes of DGM and MIM in terms of relative L2 errors for u and ∇u. Generally speaking, in terms of approximation error, MIM2< MIM1< DGM as expected. Therefore, MIM provides a better strategy over DGM. MIM provides better approximations in terms of relative L2 errors for both u and ∇u. For ∇u, the improvement of MIM1 over DGM is about several times and that of MIM2 over MIM1 is about one order of magnitude. For u, the improvement is about several times. Moreover, a dimensional dependence is observed for both u and ∇u. The higher the dimension is, the better the approximation is.

Table 8 records approximation errors of MIM and DGM in terms of activation function and network depth when d=4. MIM provides better approximations for both ∇u and u. It is not surprising that ReLU is not a suitable function for DGM due to high-order derivatives, but is suitable in MIM since only first-order derivatives are present in MIM.

and the loss function in MIM

The loss function in MIMa is

and the loss function in MIMp is

Again, we can enforce the exact boundary condition in MIM but cannot enforce it in DGM. For comparison purpose, we use penalty terms in both methods.

Relative L2 errors for u , ∇u, Δu and ∇(Δu) in terms of iteration number are plotted in Figure 7 when d=2.

Generally speaking, MIM provides better approximations for u, ∇u, Δu, and ∇(Δu) than DGM. For MIMa and MIMp, MIMp has a slightly better approximation accuracy comparable to that of MIMa, although MIMa has 2d+2 more outputs. These results are of interests since they are connected with results of local discontinuous Galerkin method that the formulation with a subset of derivatives has a better numerical performance Yan and Shu (2002); Cockburn et al. (2009). We point out that MIMa has the advantage that the exact boundary condition can be enforced, although we use penalty terms for this example.

defined over Ω=[0,2π]d, where the exact solution u(t,x)=sin(∑dk=1xk+dt). We first rewrite it into the first-order system

The loss function in DGM is

Here {ek}dk=1 is the standard basis set of Rd. The loss function in MIM is

Relative L2 errors of u, ∇u, and diag(∇2u) are recorded in Table 11. Again, as shown in previous examples, MIM provides better results compared to DGM, especially for ReQU activation function. No obvious improvement of MIM2 over MIM1 is observed.

So far, in the deep mixed residual method, only experiences from classical numerical methods at the basic level are transferred into deep learning. We have seen its obvious advantages. To further improve the deep mixed residual method, we need to transfer our experiences from classical numerical analysis at a deeper level. For example, the choice of solution space relies heavily on the choice of residual in order to maximize the performance of least-squares finite element method Bochev and Gunzburger (2015). Many other connections exist in discontinuous Galerkin method Cockburn et al. (2000) and mixed finite element method Boffi et al. (2013). For examples, since only first-order derivatives appear in the deep mixed residual method, ReLU works well for all time-independent equations we have tested but does not work well for KdV equation. Therefore, it deserves a theoretical understanding of the proposed method in the language of linear finite element method He et al. (2018). Another possible connection is to use the weak formulation of the mixed residual instead of least-squares loss, as done in deep learning by Zang et al. (2020) and in discontinuous Galerkin method by Cockburn et al. (2000). Realizing these connections in the deep mixed residual method will allow for a systematic way to understand and improve deep learning for solving PDEs.

This work was supported by National Key R&D Program of China (No. 2018YFB0204404) and National Natural Science Foundation of China via grant 11971021. We thank Qifeng Liao and Xiang Zhou for helpful discussions.