Commonly used drop-based channel models cannot satisfy the requirements of spatial consistency for millimeter-wave (mmWave) channel modeling where transient motion or closely-spaced users need to be considered. A channel model having spatial consistency can capture the smooth variations of channels, when a user moves, or when multiple users are close to each other in a local area within, say, 10 m in an outdoor scenario. Spatial consistency is needed to support the testing of beamforming and beam tracking for massive multiple-input and multiple-output (MIMO) and multi-user MIMO in fifth-generation (5G) mmWave mobile networks. This paper presents a channel model extension and an associated implementation of spatial consistency in the NYUSIM channel simulation platform. Along with a mathematical model, we use measurements where the user moved along a street and turned at a corner over a path length of 75 m in order to derive realistic values of several key parameters such as correlation distance and the rate of cluster birth and death, that are shown to provide spatial consistency for NYUSIM in an urban microcell street canyon scenario. 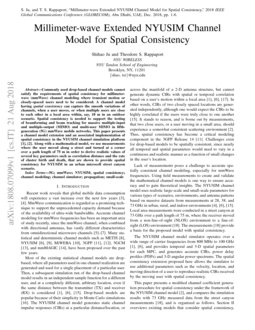 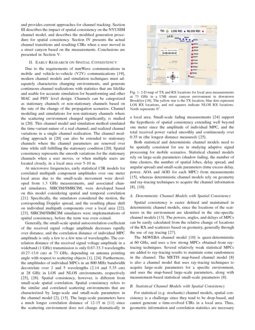 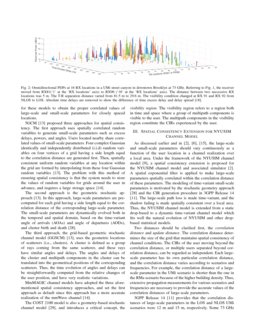 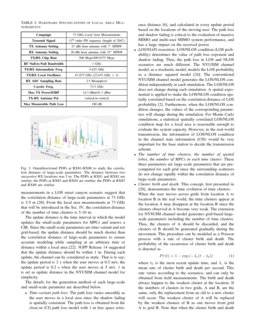 This paper describes an implementation of spatial consistency in the NYU...
Shihao Ju, et al. ∙

Recent work reveals that global mobile data consumption will experience a vast increase over the next few years [3, 4]. MmWave communication is regarded as a promising technique to support the unprecedented capacity demand because of the availability of ultra-wide bandwidths. Accurate channel modeling for mmWave frequencies has been an important area of study recently, since the mmWave channel, when combined with directional antennas, has vastly different characteristics from omnidirectional microwave channels[5, 6, 7]. Many statistical and deterministic channel models such as METIS [8], NYUSIM [6, 9], MiWEBA [10], 3GPP[11, 12], 5GCM [13], and mmMAGIC [14], have been proposed over the past few years.

Most of the existing statistical channel models are drop-based, where all parameters used in one channel realization are generated and used for a single placement of a particular user. Then, a subsequent simulation run of the drop-based channel model results in an independent sample function for a different user, and at a completely different, arbitrary location, even if the same distance between the transmitter (TX) and receiver (RX) is considered [1, 6, 15]. Drop-based models are popular because of their simplicity in Monte Carlo simulations[16]. The NYUSIM channel model generates static channel impulse responses (CIRs) at a particular distance/location, or across the manifold of a 2-D antenna structure, but cannot generate dynamic CIRs with spatial or temporal correlation based on a user’s motion within a local area[1, 6, 17]. In other words, CIRs of two closely spaced locations are generated independently, although one would expect the CIRs to be highly correlated if the users were truly close to one another [15]. It stands to reason, and is borne out by measurements, that two close users, or a user moving in a small area, should experience a somewhat consistent scattering environment[2]. Thus, spatial consistency has become a critical modeling component in the 3GPP Release 14 [11]. Challenges exist for drop-based models to be spatially consistent, since nearly all temporal and spatial parameters would need to vary in a continuous and realistic manner as a function of small changes in the user’s location.

Lack of measurements poses a challenge to accurate spatially consistent channel modeling, especially for mmWave frequencies. Using field measurements to create and validate the mathematical channel models is one way to ensure accuracy and to gain theoretical insights. The NYUSIM channel model uses realistic large-scale and small-scale parameters for various types of scenarios, environments, and antenna patterns based on massive datasets from measurements at 28, 38, and 73 GHz in urban, rural, and indoor environments [4, 6, 15]. Local area measurements were conducted in a street canyon at 73 GHz over a path length of 75 m, where the receiver moved from a non-line-of-sight (NLOS) environment to a line-of-sight (LOS) environment [18]. The measurements[18] provide a basis for the proposed model with spatial consistency.

The NYUSIM channel model simulator operates over a wide range of carrier frequencies from 800 MHz to 100 GHz [1, 6], and provides temporal and 3-D spatial parameters for each MPC, and generates accurate CIRs, power delay profiles (PDPs) and 3-D angular power spectrums. The spatial consistency extension proposed here allows the simulator to use additional parameters such as the velocity, location, and moving direction of a user to reproduce realistic CIRs received by the moving user with spatial consistency.

At microwave frequencies, early statistical CIR models for correlated multipath component amplitudes over one meter local areas due to the small-scale movement were developed from 1.3 GHz measurements, and associated channel simulators, SIRCIM/SMRCIM, were developed based on this model considering spatial and temporal correlation [21]. Specifically, the simulators considered the motion, the corresponding Doppler spread, and the resulting phase shift on individual multipath components over a local area [22, 23]. SIRCIM/SMRCIM simulators were implementations of spatial consistency, before the term was even coined.

Generally, the small-scale spatial autocorrelation coefficient of the received signal voltage amplitude decreases rapidly over distance, and the correlation distance of individual MPC amplitude is only a few to a few tens of wavelengths. The correlation distance of the received signal voltage amplitude in a wideband (1 GHz) transmission is only 0.67-33.3 wavelengths (0.27-13.6 cm) at 73 GHz, depending on antenna pointing angle with respect to scattering objects [1, 24]. Furthermore, the amplitudes of individual MPCs in an 800 MHz bandwidth decorrelate over 2 and 5 wavelengths (2.14 and 5.35 cm) at 28 GHz in LOS and NLOS environments, respectively [25, 26]. Spatial consistency, however, is different from small-scale spatial correlation. Spatial consistency refers to the similar and correlated scattering environments that are characterized by large-scale and small-scale parameters in the channel model [2, 15]. The large-scale parameters have a much longer correlation distance of 12-15 m [11] since the scattering environment does not change dramatically in a local area. Small-scale fading measurements [24] support the hypothesis of spatial consistency extending well beyond one meter since the amplitude of individual MPC, and the total received power varied smoothly and continuously over 0.35 m (the longest distance measured) [25].

Both statistical and deterministic channel models need to be spatially consistent for use in studying adaptive signal processing for mobile scenarios. Statistical channel models rely on large-scale parameters (shadow fading, the number of time clusters, the number of spatial lobes, delay spread, and angular spread) and small-scale parameters (time excess delay, power, AOA and AOD for each MPC) from measurements [15], whereas deterministic channel models rely on geometry and ray-tracing techniques to acquire the channel information [8, 10].

Spatial consistency is easier defined and maintained in deterministic channel models, since the locations of the scatterers in the environment are identified in the site-specific channel models [13]. The powers, angles, and delays of MPCs can be easily calculated from the relative change of locations of the RX and scatterers based on geometry, generally through the use of ray tracing [27].

For statistical (e.g. stochastic) channel models, spatial consistency is a challenge since they tend to be drop-based, and cannot generate a time-evolved CIRs in a local area. Thus, geometric information and correlation statistics are necessary for these models to obtain the proper correlated values of large-scale and small-scale parameters for closely spaced locations.

[13]. The problem with this method of ensuring spatial consistency is that the system needs to store the values of random variables for grids around the user in advance, and requires a large storage space [14].

The third approach, the grid-based geometric stochastic channel model (GGSCM) [13], uses the geometric locations of scatterers (i.e., clusters). A cluster is defined as a group of rays coming from the same scatterer, and these rays have similar angles and delays. The angles and delays of the cluster and multipath components in the cluster can be translated into the geometrical positions of the corresponding scatterers. Thus, the time evolution of angles and delays can be straightforwardly computed from the relative changes of the user position, and have very realistic variations.

MmMAGIC channel models have adopted the three aforementioned spatial consistency approaches, and set the first approach as default since this approach has a more accurate realization of the mmWave channel [14].

The details for the generation method of each large-scale and small-scale parameter are described below.

Local area measurements were conducted at 73 GHz using a null-to-null RF bandwidth of 1 GHz [18] to study the spatial consistency and provided the reference values of several parameters such as correlation distance of large-scale parameters. Table I provides the specifications of the measurement system [18]. The measurements were conducted in a street canyon (18 m wide) between 2 and 3 MetroTech Center in downtown Brooklyn, NY. During the measurements, the TX and RX antennas were set to 4.0 m and 1.5 m, respectively, to emulate the heights of an access point and a user terminal, respectively. TX and RX locations are shown in Fig. 1, where RX moved from the location RX81 to the location RX96 (NLOS to LOS). The T-R separation distance varied from 81.5 m to 29.6 m. Specifically, the T-R separation distance of NLOS locations (RX81 to RX91) varied from 81.5 m to 50.8 m; the T-R separation distance of LOS locations (RX92 to RX 96) varied from 49.1 m to 29.6 m. The distance between two RX locations was 5 m. Note that the TX antenna pointing angle was the direction that resulted in the strongest received power at the starting location: RX81, and was fixed during the measurements. For each TX-RX combination, the RX swept five times in the azimuth plane. Each sweep was 3 min, and the interval between sweeps was 2 min. The RX antenna swept in half power beamwidth (HPBW) step increments (15∘). A power delay profile (PDP) was recorded at each RX azimuth pointing angle, and the measurements at each location resulted in at most 120 PDPs (some angles did not have a detectable signal above the noise floor). The best RX pointing angle (the direction where the RX got the maximum received power) in the azimuth plane was selected as the starting direction for the RX azimuth sweeps (elevation remained fixed for all RXs), at each RX location measured [18].

24 directional PDPs (HPBW step increments in the azimuth plane, 360/15 = 24) [18] of one sweep at each location were combined to form one omnidirectional PDP to better illustrate spatial consistency. The denoising was done before this synthesis with a threshold of 20 dB below the peak power of each directional PDP. All 16 omnidirectional PDPs were aligned only for illustration purposes, and the time excess delays of these PDPs are shown in the Fig. 2. As the RX moved towards TX, the received power increased, and the number of time clusters also increased from 1 up to 6.

These local area measurements also showed the impact of LOS/NLOS condition on resulting PDPs. When the RX moved from RX91 to RX92, the visibility condition changed from NLOS to LOS. The PDPs at RX91, RX92, RX93 are shown in Fig. 4. The received power of RX92 was much stronger than that of RX91, and there were more MPCs at RX92 than at RX91. These results indicate that the LOS/NLOS condition is particularly critical to CIRs and cannot be generated independently for nearby locations as is currently done in conventional statistical channel models. The spatially consistent LOS/NLOS condition would help to predict the CIRs more accurately.

The spatial consistency extension for the outdoor NYUSIM channel model has been presented in this paper. The generation procedure of both large-scale parameters and small-scale parameters was modified to make these parameters spatially consistent and time-variant. Spatially correlated random variables were applied to characterize the grid-based large-scale parameters; A geometry-based approach was applied to obtain the time-variant small-scale parameters such as time-variant AODs and AOAs, and time cluster birth and death. The static large-scale path loss of drop-based simulations was transformed into a time-variant parameter. The local area measurements in a street canyon were also presented and analyzed in this paper, which indicated that the correlation distance of the number of time clusters and delay spread is about 5-10 m in a UMi street canyon scenario. More field measurements should be conducted to obtain parameters for spatial consistency in various scenarios. The modern channel models with spatial consistency will help in the design of beam tracking and beamforming in system level, and will estimate the channel more accurately for transient simulations.