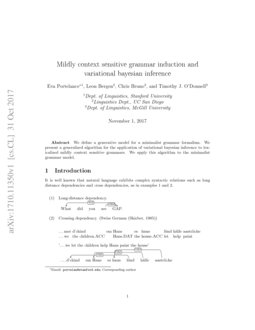 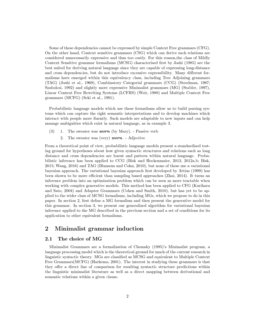 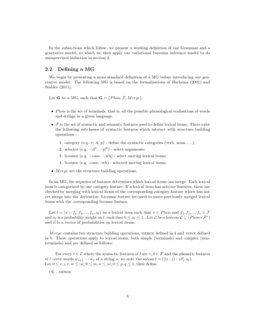 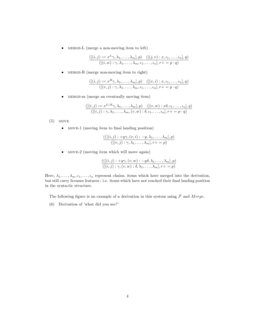 When working to understand usage of a data format, examples of the data ...
Walt Woods, et al. ∙

Probabilistic language models allow us to build parsing systems which can capture the right semantic interpretations and to develop machines which interact with people more fluently. Such models are adaptable to new inputs and can help resolve both lexical (1) and syntactic (1

) ambiguities which exist in natural language by presenting us with a scalable metric of "goodness" for parses, where the evaluation metric stems from a previously motivated and well-understood detailed theory. Furthermore, such models can be used to relate our grammar to quantitative empirical data (eg.processing times, corpus frequencies, MEG/fMRI data, etc.). From a theoretical point of view, probabilistic language models present an environment for testing the learnability of syntactic theories.

Probabilistic inference for grammar induction has been applied to combinatory categorial grammars Y. Bisk  Hockenmaier (2013, 20121, 20122); YY. Bisk (2015); Wang (2016) and tree substitution grammar Blunsom  Cohn (2010), but none of these use a variational Bayesian approach. Given the complexity of grammar generative models, this approach may be seen as favorable, as it turns an inference problem into an optimization problem and avoids the issues which arise from computing the posterior directly. This method has been applied to context free grammars Kurihara  Sato (2004) and adaptor grammars Cohen  Smith (2010), but has yet to be applied to the wider class of grammars which derive mildly context sensitive languages including minimalist grammars for which this technical report presents the first steps towards defining a generative model and a variational inference updating protocol. In the first section, we define a minimalist grammar and then in the following section, present the generative model for this grammar. This is then followed by the third section where we present the current formalization of the mean-field variational Bayes inference algorithm applied to the grammar described in the previous section and a set of conditions for its application to other equivalent formalisms.

Minimalist Grammars are a formalization of chomsk95’s The minimalist program, a language processing model which is the framework used for much of the current research in linguistic syntactic theory. The interest in studying these grammars is that they offer a direct line of comparison for resulting syntactic structure predictions within the linguistic minimalist literature. In the subsections which follow, we present a working definition of a minimalist grammar.

2.1 Formalization of a minimalist grammar

Let G be a minimalist grammar, such that G=⟨L,R⟩.

Let x be a category feature, γ,δ be a list of syntactic features and λ1,…,λm,ι1,…,ιn constituents.

Here, λ1,…,λm,ι1,…,ιn represent constituents which have previously merged using merge-m into the derivation, but still carry licensee features - i.e. items which have not reached their final landing position in the syntactic structure.

The figure in (2.1) is an example of a derivation in this system using R and the following lexical items defined. Derivation of ’what did you see?’.

what did you see [.merge

3 The generative model for a minimalist grammar

Developing a generative model for minimalist grammars is not intuitively obvious for two reasons. The first reason is minimalist grammars have always been defined ’bottom up’: they begin with a set of lexical items ( this is called the enumeration in chomsk95’s original theory) and use the structure building rules to derive a tree rooted by a single category feature. However, when sampling, we need to adopt a ’top-down’ approach to the derivation problem to make sure we only sample derivation trees which terminate - i.e. are rooted by a single category feature. The second problem we face is how to handle move. This operation complicates things significantly because it introduces the concept of tuples of items. For this reason, for our initial implementation we have decided to define a generative model which excludes move as a possibility. However, we hope to update this model to include the all the minimalist structure building operations soon. Essentially, what this means is that the following generative model is equivalent to a context free grammar.

Let c be an arbitrary category feature. We define a Dirichlet prior over θ parameterized by a distribution over categories of lexical items α. θc

c such that ∑Ni=1=1. Furthermore, θl,c is be the probability of the lexical item l of category c and \textsccat(l) is a function which returns the category feature of l.

We are explicitly sampling a distribution over each category from a Dirichlet. Effectively, our probabilistic minimalist grammar is defined as ⟨G,{θc,∀c∈L}⟩.

We can generate a derivation tree using the following recursive structure. I define the function \textscselects(l) and the function \textsccat(l) which take a lexical item as input and return respectively the selector features of that item and the category feature of the item. Furthermore, we define a function \textsclexitem(c) which takes as input a category feature and returns a lexical item of that category. Then we can recursively sample structures for derived constituents using the following equation. We define dl to be a derivation headed by the lexical item l. Let x1...xk by selector features.

Given that the denominator of this fraction is not a tractable problem, using variational Bayesian inference to approximate the posterior represents feasible way of doing inference for this model.

Mean field variational inference is based on the assumption that all variables in the approximated posterior are independent and therefore it can be factorized.

where d is the set of possible derivations of si.

We define an incremental updating scheme for q(D,θ|S) as follows. First, we update q(θ|S).

is a hyperparameter of the Dirichlet prior,

ω(si) returns all the possible derivations for si and \textsccount(l,di) returns the counts of l in some derivation di in ω(si)

, given the current estimate of the grammar. Finally, we proceed to update

and ψ is the digamma function.

By updating q(θ|S) and q(D|S) incrementally, and given that they are codependent, we can optimize q(D,θ|S).

The first assumption supposes that each lexical item is well-formed and conditionally independent, however the linearization assumption usually given in CFGs is not required of mildly context sensitive language grammar derivation trees. The variational inference updating protocol presented can be generalized to any lexicalized mildly context sensitive language grammar formalism that satisfies these three assumptions.

In this paper, we presented the formalization of a minimalist grammar and a generative model for this grammar as well as a generalized variational Bayesian approach to mildly context sensitive language grammar induction. We demonstrated how this approach can be applied to a specific grammar instantiation within this equivalence class using the case of a minimalist grammar. In future work, we hope to implement a computable version of this algorithm which will be integrated into a parsing framework which is also currently being developed Harasim . (2017)

. This new framework will then be used to test linguistic syntactic theories and provide a baseline for future development of unsupervised language learning models as well as more ’human’-like natural language processing applications.