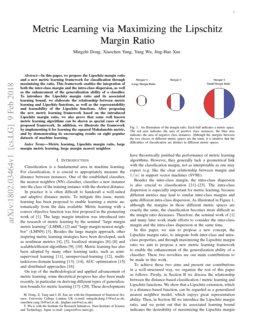 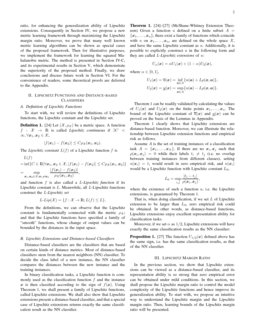 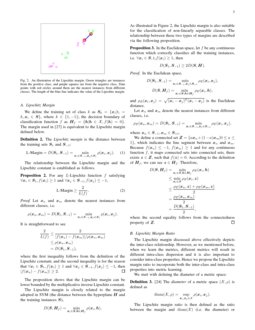 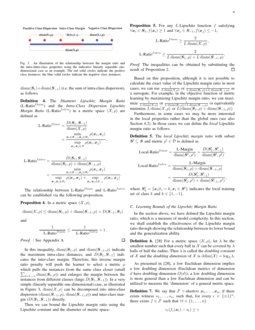 Robustness and Generalization for Metric Learning

Efficient Metric Learning for the Analysis of Motion Data

One of the main open problems in the theory of multi-category margin cla...
Khadija Musayeva, et al. ∙

Classification is a fundamental area in machine learning. For classification, it is crucial to appropriately measure the distance between instances. One of the established classifier, the nearest neighbor (NN) classifier, classifies a new instance into the class of the training instance with the shortest distance.

. Metric learning has also been adopted by many other learning tasks, such as semi-supervised learning

On top of the methodological and applied advancement of metric learning, some theoretical progress has also been made recently, in particular on deriving different types of generalization bounds for metric learning [17, 18, 19, 20]. These developments have theoretically justified the performance of metric learning algorithms. However, they generally lack a geometrical link with the classification margin, not as interpretable as one may expect (e.g. like the clear relationship between margin and 1/|w|

In this paper, we aim to propose a new concept, the Lipschitz margin ratio, to integrate both inter-class and intra-class properties, and through maximizing the Lipschitz margin ratio we aim to propose a new metric learning framework to enable the enhancement of the generalization ability of a classifier. These two novelties are our main contributions to be made in this work.

To achieve these two aims and present our contributions in a well-structured way, we organize the rest of this paper as follows. Firstly, in Section II we discuss the relationship between the distance-based classification / metric learning and Lipschitz functions. We show that a Lipschitz extension, which is a distance-based function, can be regarded as a generalized nearest neighbor model, which enjoys great representation ability. Then, in Section III we introduce the Lipschitz margin ratio, and we point out that its associated learning bound indicates the desirability of maximizing the Lipschitz margin ratio, for enhancing the generalization ability of Lipschitz extensions. Consequently in Section IV, we propose a new metric learning framework through maximizing the Lipschitz margin ratio. Moreover, we prove that many well known metric learning algorithms can be shown as special cases of the proposed framework. Then for illustrative purposes, we implement the framework for learning the squared Mahalanobis metric. The method is presented in Section IV-C, and its experimental results in Section V, which demonstrate the superiority of the proposed method. Finally, we draw conclusions and discuss future work in Section VI. For the convenience of readers, some theoretical proofs are deferred to the Appendix.

The Lipschitz constant L(f) of a Lipschitz function f is

From the definitions, we can observe that the Lipschitz constant is fundamentally connected with the metric ρX; and that the Lipschitz functions have specified a family of “smooth” functions, whose change of output values can be bounded by the distances in the input space.

[25, 26, 24, 27] (McShane-Whitney Extension Theorem) Given a function u defined on a finite subset A={x1,…,xn}, there exist a family of functions which coincide with u on x1,…,xn, are defined on the whole space X, and have the same Lipschitz constant as u. Additionally, it is possible to explicitly construct u in the following form and they are called L-Lipschitz extensions of u:

Theorem 1 can be readily validated by calculating the values of U1(x) and U2(x) on the finite points x1,…,xn. The bound of the Lipschitz constant of ¯¯¯u(x) and u––(x) can be proved on the basis of the Lemmas in Appendix.

Assume A is the set of training instances of a classification task A={x1,…,xN}. If there are no xi,xj such that ρ(xi,xj)=0 while their labels ti≠tj (i.e. no overlap between training instances from different classes), setting u(xi)=ti would result in zero empirical risk, and u(xi) would be a Lipschitz function with Lipschitz constant L0,

where the existence of such a function u, i.e. the Lipschitz extensions, is guaranteed by Theorem 1.

Moreover, if we set α as 1/2, Lipschitz extensions will have exactly the same classification results as the NN classifier:

[27] The function U1/2(x) defined above has the same sign, i.e. has the same classification results, as that of the NN classifier.

We define the training set of class k as Sk={xi|ti=k,xi∈S}, where k∈{1,−1}; the decision boundary of classification function f as Hf={h|h∈X,f(h)=0}. The margin used in [27] is equivalent to the Lipschitz margin defined below.

The Lipschitz margin is the distance between the training sets S1 and S−1:

It is straightforward to see

where the first inequality follows from the definition of the Lipschitz constant; and the second inequality is for the reason that ∀xi∈S1,f(xi)≥1 and ∀xj∈S−1,f(xj)≤−1, then |f(xn)−f(xm)|≥2. ∎

The proposition shows that the Lipschitz margin can be lower bounded by the multiplicative inverse Lipschitz constant.

H and the training instances S),

As illustrated in Figure 2, the Lipschitz margin is also suitable for the classification of non-linearly separable classes. The relationship between these two types of margins are described via the following proposition.

In the Euclidean space, let f be any continuous function which correctly classifies all the training instances, i.e. ∀xi∈S,tif(xi)≥1, then

In the Euclidean space,

and ρE(xi,xj)=√(xi−xj)T(xi−xj) is the Euclidean distance.

We define a connected set Z={axn+(1−a)xm|0≤a≤1}, which indicates the line segment between xn and xm. Because f(xn)≤−1, f(xm)≥1 and for any continuous function f, it maps connected sets into connected sets, there exists z∈Z, such that f(z)=0. According to the definition of Hf, we can see z∈Hf. Therefore,

where the second equality follows from the connectedness property of Z. ∎

We start with defining the diameter of a metric space:

The Lipschitz margin ratio is then defined as the ratio between the margin and diam(X) (i.e. the diameter) or diam(S1)+diam(S−1) (i.e. the sum of intra-class dispersion), as follows.

The relationship between L-RatioDiam and L-RatioIntra can be established via the following proposition.

In this inequality, diam(S1,ρ) and diam(S−1,ρ) indicate the maximum intra-class distances, and D(S1,S−1) indicates the inter-class margin. Therefore, this inverse margin ratio penalty will push the learner to select a metric ρ which pulls the instances from the same class closer (small ∑t=1,−1diam(St,ρ)) and enlarges the margin between the instances from different classes (large D(S1,S−1)). In a very simple (linearly separable one-dimensional) case, as illustrated in Figure 3, diam(X,ρ) can be decomposed into intra-class dispersion (diam(S−1,ρ), diam(S−1,ρ)) and inter-class margin (D(S1,S−1)) directly.

The inequalities can be obtained by substituting the result of Proposition 2. ∎

Furthermore, in some cases we may be more interested in the local properties rather than the global ones (see also Section 4.2). In those cases we can define the local Lipschitz margin ratio as follows.

[28] For a metric space (X,ρ), let λ be the smallest number such that every ball in X can be covered by λ balls of half the radius. Then λ is called the doubling constant of X and the doubling dimension of X is ddim(X)=log2λ.

Fat-shattering dimension is defined as follows

[28] Let F be the collection of real valued functions over X with the Lipschitz constant at most L. Define D=fat1/16(F) and let P

be some probability distribution on

Furthermore, if f is correct on all but k examples, we have with probability at least 1−δ

In classification problems, when ti∈{−1,1}, L=supi,j2ρ(xi,xj), then D=fat1/16(F) can be bounded by the surrogate of Lipschitz Margin Ratio as follows:

The first inequality has been proved in [28]. We prove the second inequality here. Because L=supi,j2ρ(xi,xj)=2D(S−1,S1), we have

where the first inequality is based on Proposition 4. Meanwhile, because ddim(X)≥1, the second inequality holds. ∎

Under the condition that n≥D34e, the following bounds for the surrogate margin ratios holds. If f is correct on all but k examples, we have with probability at least 1−δ

Substitute the inequalities of Proposition 6 into Theorem 2. ∎

From previous sections, we have seen that Lipschitz functions have the following desirable properties relevant to metric learning:

Therefore, it is reasonable for us to conduct metric learning with the Lipschitz functions and control the model complexity by maximizing (the lower bound of) the Lipschitz margin ratio.

The optimization problem could be formulated as follows:

where N indicates the number of training instances; a denotes the parameters of the classification function f; ξ={ξi} is the hinge loss; α>0 is a trade-off parameter which balances the empirical risk term ∑Ni=1ξi and the generalization ability term 1/L-Ratio. L(f) and diam(X,ρ), diam(S1,ρ) and diam(S−1,ρ)， from the L-Ratio term, will be replaced by either the empirically estimated values ^L and ^diam or the theoretical upper bounds Ls and diams.

Empirical estimates of ^L and ^diam can be added as constraints

Then the objective function of minimizing 1/L-RatioDiam becomes

Some widely adopted metric learning algorithms can be shown as special cases of the proposed framework.

Iv-C Applying the Framework for Learning the Squared Mahalanobis Metric

We now apply the proposed framework to learn the squared Mahalanobis metric,

where M+ is the set of positive semi-definite matrices. A Lipschitz extension function is selected as the classifier:

Based on the framework of (6) and (7), firstly we propose an optimization formula which penalizes the L-RatioDiam:

Based on the framework in (6) and (8), we can also propose an optimization formula which penalizes the upper bound of L-RatioIntra:

In order to solve (11) and (13) more efficiently, alternating direction methods of multipliers (ADMM) have been adopted (see Algorithm 1), and the detailed derivation of the ADMM algorithm is presented in Appendix -F.

Our proposed LipD, LipI are implemented using the cvx toolbox111http://cvxr.com/ in MATLAB with the solver of SeDuMi [31]. The C in our algorithm is fixed at 1 and the λ in the ADMM algorithm is fixed at 1. The LMNN, MCML and NCA are from the dimension reduction toolbox222https://lvdmaaten.github.io/drtoolbox/.

As shown in Table I

, the proposed algorithms Lip achieve the best mean accuracy on four datasets and equally best with MCML on one dataset. The Lip outperforms 1-NN and NCA on seven datasets and LMNN and MCML on five datasets. The only dataset that the Lip performs worse than all other methods is Fertility, in which our method potentially suffers from within-class outliers and hence has a large intra-class dispersion. Apart from this dataset, LMNN or MCML outperforms the Lip by only a small performance gap, less than

0.5%. Such encouraging results demonstrate the effectiveness of the proposed framework.

In this paper, we have presented that the representation ability of Lipschitz functions is very strong and the complexity of the Lipschitz functions in a metric space can be controlled by penalizing the Lipschitz margin ratio. Based on these desirable properties, we have proposed a new metric learning framework via maximizing the Lipschitz margin ratio. An application of this framework for learning the squared Mahalanobis metric has been implemented and the experiment results are encouraging.

The diameter Lipschitz margin ratio or the intra-class Lipschitz margin ratio in the optimization function is equivalent to an adaptive regularization. In other words, since we encourage samples to stay close within the same class, samples which locate near the class boundary are valued more than those in the center. Therefore, the performance of our method may deteriorate under the existence of outliers and this problem has been reported on the dataset Fertility. We aim to develop more robust methods in our future work.