Computing similarity between two legal documents is an important and challenging task in the domain of Legal Information Retrieval. Finding similar legal documents has many applications in downstream tasks, including prior-case retrieval, recommendation of legal articles, and so on. Prior works have proposed two broad ways of measuring similarity between legal documents - analyzing the precedent citation network, and measuring similarity based on textual content similarity measures. But there has not been a comprehensive comparison of these existing methods on a common platform. In this paper, we perform the first systematic analysis of the existing methods. In addition, we explore two promising new similarity computation methods - one text-based and the other based on network embeddings, which have not been considered till now. 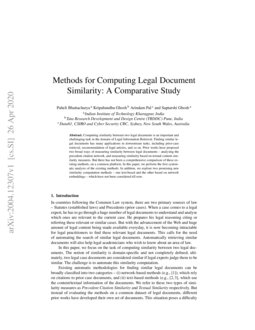 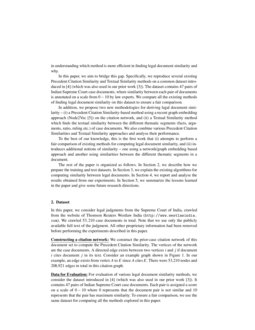 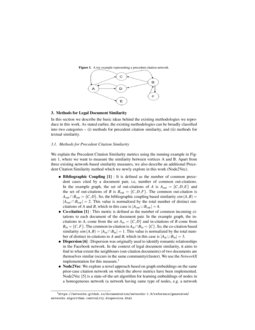 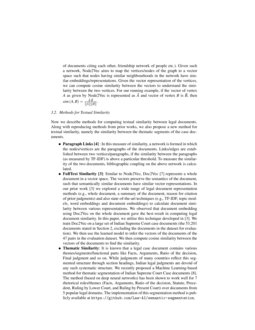 Unsupervised Identification of Relevant Prior Cases

Measuring Law Over Time: A Network Analytical Framework with an Application to Statutes and Regulations in the United States and Germany

This article has been withdrawn by arXiv administrators because the subm...
Sucheta Ghosh, et al. ∙

In the world of the Internet and World Wide Web, which offers a tremendo...
Dr. Ramya C, et al. ∙

Getting an overview over the legal domain has become challenging, especi...
Sabine Wehnert, et al. ∙

In countries following the Common Law system, there are two primary sources of law – Statutes (established laws) and Precedents (prior cases). When a case comes to a legal expert, he has to go through a huge number of legal documents to understand and analyse which ones are relevant to the current case. He prepares his legal reasoning citing or referring these relevant or similar cases. But with the advancement of the Web and huge amount of legal content being made available everyday, it is now becoming intractable for legal practitioners to find these relevant legal documents. This calls for the need of automating the search of similar legal documents. Automatically retrieving similar documents will also help legal academicians who wish to know about an area of law.

In this paper, we focus on the task of computing similarity between two legal documents. The notion of similarity is domain-specific and not completely defined; ultimately, two legal case documents are considered similar if legal experts judge them to be similar. The challenge is to automate this similarity computation.

[kumar2011similarity]), which rely on citations to prior case documents, and (ii) text-based methods (e.g., [contract-semantic-text-matching, mandal2017measuring], which use the content/textual information of the documents. We refer to these two types of similarity measures as Precedent Citation Similarity and Textual Similarity respectively. But instead of evaluating the methods on a common dataset of legal documents, different prior works have developed their own set of documents. This situation poses a difficulty in understanding which method is more efficient in finding legal document similarity and why.

In this paper, we aim to bridge this gap. Specifically, we reproduce several existing Precedent Citation Similarity and Textual Similarity methods on a common dataset introduced in [kumar2013similarity] (which was also used in our prior work [mandal2017measuring]). The dataset contains 47 pairs of Indian Supreme Court case documents, where similarity between each pair of documents is annotated on a scale from 0−10 by law experts. We compare all the existing methods of finding legal document similarity on this dataset to ensure a fair comparison.

To the best of our knowledge, this is the first work that (i) attempts to perform a fair comparison of existing methods for computing legal document similarity, and (ii) introduces additional notions of similarity – one using a network/graph embedding based approach and another using similarities between the different thematic segments in a document.

The rest of the paper is organized as follows. In Section 2, we describe how we prepare the training and test datasets. In Section 3, we explain the existing algorithms for computing similarity between legal documents. In Section 4, we report and analyse the results obtained from our experiments. In Section 5, we summarize the lessons learned in the paper and give some future research directions.

In this paper, we consider legal judgments from the Supreme Court of India, crawled from the website of Thomson Reuters Westlaw India (http://www.westlawindia.com). We crawled 53,210 case documents in total. Note that we use only the publicly available full text of the judgment. All other proprietary information had been removed before performing the experiments described in this paper.

Constructing a citation network: We construct the prior-case citation network of this document set to compute the Precedent Citation Similarity. The vertices of the network are the case documents. A directed edge exists between two vertices i and j if document i cites document j in its text. Consider an example graph shown in Figure 1. In our example, an edge exists from vertex A to E since A cites E. There were 53,210 nodes and 208,921 edges in total in this citation graph.

Data for Evaluation: For evaluation of various legal document similarity methods, we consider the dataset introduced in [kumar2013similarity] (which was also used in our prior work [mandal2017measuring]). It contains 47 pairs of Indian Supreme Court case documents. Each pair is assigned a score on a scale of 0−10 where 0 represents that the document pair is not similar and 10 represents that the pair has maximum similarity. To ensure a fair comparison, we use the same dataset for comparing all the methods explored in this paper.

We now compare the performances of the various methods stated in the previous section, over the evaluation dataset of 47 document pairs (stated in Section 2).

Recall from Section 2 that the evaluation dataset contains 47 document pairs, where each pair has a similarity score in the range [0,10] that is assigned by legal experts. To judge the performance of a particular similarity method, we use the Pearson Correlation coefficient between the expert scores and the computationally obtained similarities from the said methodology.

Table 2 shows the results (Pearson Correlation) for each method. We find that among the Precedent Citation Similarity based methods, the graph embedding approach, Node2Vec, performs the best. Legal citation networks are very sparse. Only a few cases are cited for each document. Results suggest that simpler measures like co-citation and dispersion perform poorly in such scenarios. On the other hand, graph embedding based method could perform much better in comparison.

Among Textual Similarity measures, we find that document embedding on the full text performs the best.222Note that the prior work [mandal2017measuring] reported a slightly different Pearson correlation value than what we are reporting here (for the same evaluation dataset), because the training data for the Doc2vec model is different in this work. Thematic similarity combined using the max shows very comparable performance. This observation suggests that even textually, there are certain themes in which two documents can be more similar than in others; for instance, two documents may be very similar in terms of their facts but different in their final judgment or arguments. It depends on the perspective through which a legal document being similar or dissimilar is judged. In our framework we find that the documents are most similar in Ratio (correlation 0.45), Precedent (0.42) and Fact (0.37). Detailed results are omitted due to space constraints.

We find that the max performs consistently well in Table 3. The best performance is observed when we combine the bibliographic coupling based precedent citation similarity with the FullText similarity. On the other hand when we combine Thematic Similarity with the Precedent Citation Similarity measures, the average combination with the graph embedding based approach performs the best. In both cases, we get a higher correlation with expert scores by combining Textual Similarity and Precedent Citation Similarity, than what we obtained by using one type of methodology alone.

These results show that both textual similarity and precedent citation similarity are helpful in measuring the similarity between legal case documents.

In this paper, we attempt to compare existing approaches for legal document similarity. We perform a systematic comparison of the methods, on a set of 47 document pairs. We also explore two new methods, one based on graph embeddings, and the other based on textual similarity between thematic segments.

We show that understanding legal document similarity is indeed a challenging task, and has various different facets, such as similarity in precedent citation, similarity in textual content, similarity of themes, and so on. Multiple facets of document properties contribute to the overall similarity of the documents. It may not be possible to capture all of them by a single methodology; rather, an aggregation of the perspectives is necessary.

There are several future directions of the work reported in this paper. One immediate future work is to develop better methods for judging similarity of legal case documents, which would agree more closely with the opinion of the legal experts. A detailed inspection of document-pairs that the experts judge to be highly similar may reveal other factors that need to be considered while judging the similarity of such documents. In this context, it is important to consider explainability of the similarity computation – ideally, experts can be asked to explain how they judge similarity between two legal documents, and automatic methods may be developed based on these explanations. We plan to explore these directions in future.