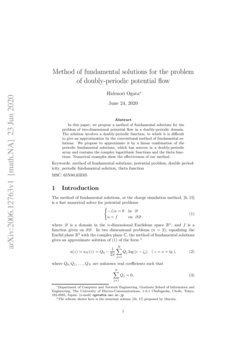 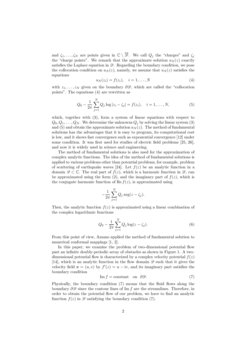 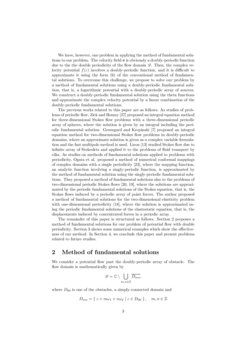 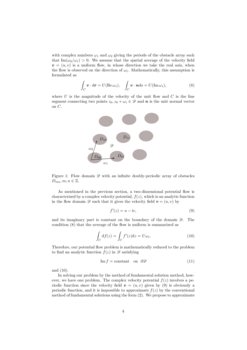 In this paper, we propose a method of fundamental solutions for the prob...
Hidenori Ogata, et al. ∙

A numerical study of variational discretizations of the Camassa-Holm equation

In the present paper, we study the limit sets of the almost periodic fun...
Lev Sakhnovich, et al. ∙

The AAAtrig algorithm for rational approximation of periodic functions

The method of fundamental solutions, or the charge simulation method, [6, 15] is a fast numerical solver for potential problems

where D is a domain in the n-dimensional Euclidean space Rn, and f is a function given on ∂D. In two dimensional problems (n=2), equalizing the Euclid plane R2 with the complex plane C, the method of fundamental solutions gives an approximate solution of (1) of the form 222The scheme shown here is the invariant scheme [16, 17] proposed by Murota.

where Q0,Q1,…,QN are unknown real coefficients such that

and ζ1,…,ζN are points given in C∖¯¯¯¯¯D. We call Qj the “charges” and ζj the “charge points”. We remark that the approximate solution uN(z) exactly satisfies the Laplace equation in D. Regarding the boundary condition, we pose the collocation condition on uN(z), namely, we assume that uN(z) satisfies the equations

with z1,…,zN given on the boundary ∂D, which are called the “collocation points”. The equations (4) are rewritten as

which, together with (3), form a system of linear equations with respect to Q0,Q1,…,QN. We determine the unknowns Qj by solving the linear system (3) and (5) and obtain the approximate solution uN(z). The method of fundamental solutions has the advantages that it is easy to program, its computational cost is low, and it shows fast convergence such as exponential convergence [11] under some condition. It was first used for studies of electric field problems [25, 26], and now it is widely used in science and engineering.

The method of fundamental solutions is also used for the approximation of complex analytic functions. The idea of the method of fundamental solutions is applied to various problems other than potential problems, for example, problem of scattering of earthquake waves [24]. Let f(z) be an analytic function in a domain D⊂C. The real part of f(z), which is a harmonic function in D, can be approximated using the form (2), and the imaginary part of f(z), which is the conjugate harmonic function of Ref(z), is approximated using

Then, the analytic function f(z) is approximated using a linear combination of the complex logarithmic functions

From this point of view, Amano applied the method of fundamental solution to numerical conformal mappings [1, 2].

The remainder of this paper is structured as follows. Section 2 proposes a method of fundamental solutions for our problem of potential flow with double periodicity. Section 3 shows some numerical examples which show the effectiveness of our method. In Section 4, we conclude this paper and present problems related to future studies.

We consider a potential flow past the doubly-periodic array of obstacle. The flow domain is mathematically given by

where D00 is one of the obstacles, a simply-connected domain and

with complex numbers ω1 and ω2 giving the periods of the obstacle array such that Im(ω2/ω1)>0. We assume that the spatial average of the velocity field v=(u,v) is a uniform flow, in whose direction we take the real axis, when the flow is observed on the direction of ω1. Mathematically, this assumption is formulated as

where U is the magnitude of the velocity of the unit flow and C is the line segment connecting two points z0,z0+ω1∈D and n

is the unit normal vector on

As mentioned in the previous section, a two-dimensional potential flow is characterized by a complex velocity potential, f(z), which is an analytic function in the flow domain D such that it gives the velocity field v=(u,v) by

and its imaginary part is constant on the boundary of the domain D. The condition (8) that the average of the flow is uniform is summarized as

Therefore, our potential flow problem is mathematically reduced to the problem to find an analytic function f(z) in D satisfying

In solving our problem by the method of fundamental solution method, however, we have one problem. The complex velocity potential f(z) involves a periodic function since the velocity field v=(u,v) given by (9) is obviously a periodic function, and it is impossible to approximate f(z) by the conventional method of fundamental solutions using the form (2). We propose to approximate the complex velocity potential f by

ζ1,…,ζN are points given in D00 and Q1,…,QN are unknown real coefficients such that

The approximate velocity potential fN(z) satisfies the condition (10). In fact,

where we used the first formula of (14) on the third equality and (13) on the fourth equality.

It means that the approximate complex velocity f′N(z) is an elliptic function of periods ω1,ω2.

The approximate velocity potential fN(z) in (12) is an analytic function in D such that it satisfies the condition (10) and gives velocity field which is a doubly-periodic function of periods ω1,ω2. Regarding the boundary condition (11), we pose a collocation condition on fN(z), namely, we assume the equation

where z1,…,zN are given points on ∂D00 called the “collocation points” and C is an unknown real constant. The equations (16) are rewritten as

In this section, we show some numerical examples which show the effectiveness of our method. All the computations were performed using programs coded in C++ with double precision.

Figure 2 shows the examples of flows past a doubly-periodic array of cylinders, that is, flows in the domain

with a positive constant r. The charge points ζj and the collocation points zj are respectively taken as

where q is a constant such that 0<q<1 and was taken as q=0.7 in the examples shown in Figure 2

. To estimate the accuracy of our method, we evaluated the value

where C is the constant obtained in solving the system of linear equations (13) and (16). The value ϵN shows how accurately the approximate potential fN(z) satisfies the boundary condition (7). Figure 3 shows ϵN evaluated for the above numerical example with ω1=4r and ω2=4ri for q=0.5,0.6,0.7, which appears in giving the charge points ζj by (18). The figure shows that the approximation of our method converges exponentially as the number of unknowns N increases.