The memoryless determinacy of infinite parity games was proven independently by Emerson and Jutla, and Mostowski, with various applications in computer science. Then Zielonka provided an elegant and simple argument. Several simpler proofs can be found in the literature in the case where the underlying graph is finite. These proofs usually proceed by induction on the number of relevant vertices. Recently, Haddad provided an even simpler argument by precisely defining what a relevant vertex is: one that has incoming edges and proper outgoing edges. The proof splits one relevant vertex into two non-relevant ones for the induction step, and concludes after a case disjunction. This note adapts Haddad's technique to the infinite case. A priority is relevant if it labels relevant vertices, and the proof proceeds by induction on the number of relevant priorities (as Zielonka). Haddad's vertex split is replaced with the splitting of many vertices, and the case disjunction with a transfinite induction over the winning regions (as Zielonka). The main difference with Zielonka is that here the notions of traps, attractors, etc., are not used. Memoryless determinacy was generalized by Grädel and Walukiewicz to infinite sets of priorities, but it is unclear whether Haddad's technique can be adapted to such a setting. 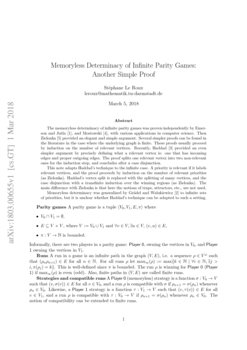 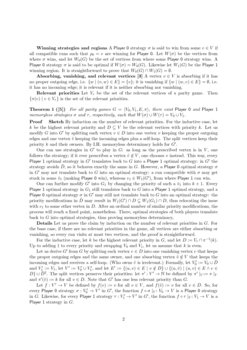 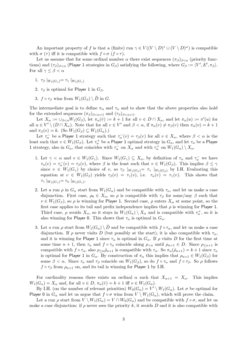 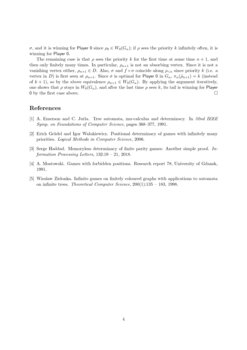 The memoryless determinacy of infinite parity games with finitely many priorities was proved independently by Emerson and Jutla [1], and Mostowski [4], with various applications in computer science. Then Zielonka [5] provided an elegant and simple argument for the same theorem.

Several simpler proofs can be found in the literature in the case where the underlying graph is finite. These proofs usually proceed by induction on the number of relevant vertices. Recently, Haddad [3] found a very simple argument by defining accurately what a relevant vertex is: one that has incoming edges and proper outgoing edges. His proof splits one relevant vertex into two non-relevant ones for the induction step, and concludes after a case disjunction.

Since Haddad [3] also proceeds by induction on the number of relevant vertices, it cannot be used verbatim to prove the determinacy of infinite games with finitely many priorities. However, this article adapts Haddad’s technique for these games by performing an induction on the number of relevant priorities, i.e. the priorities that label relevant vertices. For this purpose, Haddad’s single vertex split is replaced with the splitting of (in)finitely many vertices at once.

The same theorem was generalised by Grädel and Walukiewicz [2] for infinite sets of priorities, but the proofs from this article could not be used verbatim to prove this generalisation, since they proceed by induction on the number of relevant priorities.

about prefix-independent winning conditions. (These lemmas are probably folklore one way or another.) Section

3 includes the definition of parity games and a shorter proof of memoryless determinacy of infinite parity games with finitely many priorities. Section 4 provides a more constructive proof.

Compatible runs A run ρ is compatible with a strategy σ:V0→V (τ:V1→V) if ρn+1=σ(ρn) whenever ρn∈V0 (V1). This notion is naturally extended to finite runs.

Lemma 1 below is only used in Section 3. It states that for all games with prefix-independent winning condition, there exists a memoryless strategy that wins from all vertices from where the player can win without memory. It shares similarities with [5, Second proof, p150].

Let W⊆Cω be a prefix-independent winning condition. For all games G using colors C and winning condition W, there exists a Player 0 memoryless strategy σ such that Wm0(G,σ)=Wm0(G). (And likewise for Player 1.) Let α be some ordinal of cardinality |Wm0(G)|, and let {vβ}β∈α be an enumeration of Wm0(G). For all β∈α let σβ be a Player 0 strategy that is winning from vβ. Let f:Wm0(G)→α be such that f(v) is the least β with v∈Wm0(G,σβ), which is well-defined since every non-empty subset of an ordinal has a least element. Let σ be a Player 0 strategy satisfying σ(v):=σf(v)(v) for all v∈V0∩Wm0(G).

The remainder of Section 2 is only used in Section 4.

Lemma 2 below states that when trying to prove memoryless determinacy of prefix-independent winning conditions, it suffices to consider games void of unfair-win vertices.

Fix C and a prefix-independent W⊆Cω. If the games G=⟨V0,V1,E,C,π,W⟩ void of unfair-win vertices are uniformly memoryless determined, so are all games, i.e. without the unfair-win restriction. Let us transform an arbitrary game G=⟨V0,V1,E,C,π,W⟩ into G−=⟨V0,V1,E−,C,π,W⟩ by removing the proper outgoing edges of the unfair-win vertices, thus making them absorbing, as in Figure 1. Let σ be a Player 0 memoryless strategy in G−, so σ is also a strategy in G. Let a run ρ start in Wm0(G−,σ) and be compatible with σ in G. Let us show that ρ is also compatible with σ in G−. Towards a contradiction, let (ρn,ρn+1) be the first edge of ρ that is not present in E−, so ρn is a unfair-win vertex in G, and ρn∈V1 (as Player 0 just follows σ), so π(ρn)

is odd. It implies that the prefix

ρ≤n, which is compatible with σ in G− by choice of n, leads in G− to an absorbing state with odd priority, contradicting (by prefix independence) the assumption that ρ0∈Wm0(G−,σ). Therefore ρ is also compatible with σ in G− and thus makes Player 0 win, which shows that Wm0(G−,σ)⊆Wm0(G,σ) for all σ. By symmetry Wm1(G−,τ)⊆Wm1(G,τ) for all Player 1 strategy τ. By assumption let σ and τ be Player 0 and Player 1 memoryless strategies, respectively, such that Wm0(G−,σ)∪Wm1(G−,τ)=V0∪V1. So Wm0(G,σ)∪Wm1(G,τ)=V0∪V1 by the above inclusions.

Parity games A parity game with finitely many priorities is a two-player win/lose game where C=N, the function π:V→N is bounded, and the prefix-independent W is defined as follows. For all runs ρ let max∞(ρ):=max{k∈N∣∀i∈N,∃j>i,π(ρj)=k}, which is well-defined since π is bounded. The run ρ is winning for Player 0 (Player 1) if max∞(ρ) is even (odd). So a parity game amounts to a tuple ⟨V0,V1,E,π⟩ where π:V→N is bounded.

Absorbing, vanishing, and relevant vertices [3] A vertex v∈V is absorbing if it has no proper outgoing edge, i.e. {w∣(v,w)∈E}={v}; it is vanishing if {w∣(w,v)∈E}=∅, i.e. it has no incoming edge; it is relevant if it is neither absorbing nor vanishing.

Theorem 3 below is proved without interleaving the inductions.

The parity games are uniformly memoryless determined. Let us prove the claim by induction on the number of relevant priorities. Base case: if there are no relevant priorities in a game, there is no relevant vertices either, so all vertices are either absorbing or vanishing. In this case every run visits at most two vertices, and it is straightforward to prove the claim by backward induction.

First step Let D be the relevant vertices from V with priority k. Wlog let us assume that k is even, i.e. up to adding 1 to every priority and swapping V0 and V1.

Let us modify G to make the priority k irrelevant and to be able to invoke the induction hypothesis. More specifically, let us derive G+ from G by splitting each vertex v∈D into one vanishing split vertex v that keeps the proper outgoing edges and the same controller, and one absorbing split vertex ~v∉V that keeps the incoming edges and receives a self-loop. (The controller of ~v and the priority of v are irrelevant, so, e.g., both split vertices preserve them.) This is depicted in Figure 2.

The new game G+ has one less relevant priority than G, namely k, so by induction hypothesis there exist Player 0 and Player 1 memoryless strategies σ+ and τ+, respectively, such that Wm0(G+,σ+)∪Wm1(G+,τ+)=V+0∪V+1. Either σ+ or τ+ will induce a winning strategy in G, which will complete the first step.

Before letting the players use σ+ or τ+ and play in G, the strategies need modifying, as their domains and especially codomains are different in G and G+ (i.e. V vs V+=V∪~D). To prepare the modification, let f:V∪~D→V be defined by f(v):=v for all v∈V, and f(~v):=v for all v∈D. Now, the function f∘σ+∣VV0:V0→V is a Player 0 strategy in G, and f∘τ+∣VV1:V1→V is a Player 1 strategy in G. The effect of f is depicted in Figure 3, where the double lines represent partial strategies towards ~D and D, respectively.

To prove the forthcoming Inequality (2) let us make a case disjunction. First case, Wm0(G+,σ+)=V+. Let ρ be a run compatible with f∘σ+ in G. If ρ sees priority k infinitely often, it makes Player 0 win. If ρ sees priority k finitely many times only, ρ visits D only finitely often, so from some point on, ρ is compatible with σ+, by Equivalence (1). By prefix-independence and since σ+ is winning from everywhere, ρ makes Player 0 win. This shows that f∘σ+ wins in G (from everywhere), thus implying Inequality (2).

Second step Let G be a game with relevant priorities at most k. By Lemma 1 let σ and τ be Player 0 and Player 1 memoryless strategies, respectively, such that Wm0(G,σ)=Wm0(G) and Wm1(G,τ)=Wm1(τ). Towards a contradiction, which will prove the claim, let us assume that Wm0(G,σ)∪Wm1(G,τ)≠V0∪V1. Let V−:=V∖Wm0(G)∪Wm1(G) and let us argue two useful facts about V− (thus using one Zielonka’s trap without defining the concept).

However, the game G− uses priorities at most k, so Inequality (2) contradicts Equality (3) and the assumption Wm0(G,σ)∪Wm1(G,τ)≠V0∪V1 made at the beginning of the second step.

Note that the first step of the proof of Theorem 3, which uses Haddad’s technique, could be replaced with something similar to the end of [5, First proof, p149] from Equation (5) onwards.

Let us first transform an arbitrary parity game G=⟨V0,V1,E,π⟩ into G−=⟨V0,V1,E−,π⟩ by removing the useless self-loops, as in Figure 1 (righthand side). Let σ be a Player 0 memoryless strategy in G−, so σ is also a strategy in G. Let ρ be a run starting in Wm0(G−,σ) and that is compatible with σ in G, which is less constrained than being compatible with σ in G−: the run ρ amounts to the interleaving of some run ρ− that is compatible with σ on G−, which makes Player 0 win, with finitely or infinitely many uses of useless self-loops on vertices controlled by Player 1. These vertices have even priorities, so ρ makes Player 0 win just like ρ− does, which shows that Wm0(G−,σ)⊆Wm0(G,σ) for all σ. By symmetry Wm1(G−,τ)⊆Wm1(G,τ) for all Player 1 strategy τ.

Let us now assume that G is void of unfair-win vertices. So in G− only absorbing states have self-loops, so G− is uniformly memoryless determined by assumption. Let σ and τ be Player 0 and Player 1 memoryless strategies, respectively, such that Wm0(G−,σ)∪Wm1(G−,τ)=V0∪V1. So Wm0(G,σ)∪Wm1(G,τ)=V0∪V1 by the above inclusions.

The parity games are uniformly memoryless determined. By Lemma 4 it suffices to prove the claim for games where only absorbing states have self-loops. Let us proceed by induction on the number of relevant priorities in G. The beginning of the argument is the same as the proof of Theorem 3 until Equivalence 1. (The only difference is that there should not be dashed self-loops in the new Figures 2 and 3.)

To solve the above issue, G+ is further modified as shown in Figure 5, where the parity of i is irrelevant.

The transfinite modification of G+

is now formally defined by mutual induction with the number of relevant properties. Let us assume that for some ordinal number

The intermediate goal is to define πα (and thus Gα:=⟨V+,E+,πα⟩) and τα, a Player 1 strategies in Gα, and to show that the above four properties also hold for the extended sequences (Gβ)β<α+1 and (τβ)β<α+1.

By definition β<α implies Xβ⊆Xα, so for cardinality reasons there exists a (least) ordinal α0 such that Xα0+1=Xα0. This implies Wm1(Gα0)=Xα0, so

The remaining case is that ρ sees the priority k first at some time n+1, and then only finitely many times. In particular, ρn+1 is not an absorbing vertex. Since it is not a vanishing vertex either, ρn+1∈D. By Equivalence (1), σ and f∘σ coincide along ρ<n since priority k (i.e on a vertex in D) is first seen at ρn+1. Since ρ0∈Wm0(Gα0) and σ is optimal for Player 0 in Gα0, πα0(~ρn+1)=k (as opposed to k+1), so ρn+1∈Wm0(Gα0) by Equivalence (4). By applying the argument iteratively, one shows that ρ stays in Wm0(Gα0), and after the last time ρ sees k, its tail is winning for Player 0 by the first case above.