In artificial intelligence, multi agent systems constitute an interesting typology of society modeling, and have in this regard vast fields of application, which extend to the human sciences. Logic is often used to model such kind of systems as it is easier to verify the explainability and validation, so for this reason we have tried to manage agents' memory extending a previous work by inserting the concept of time. 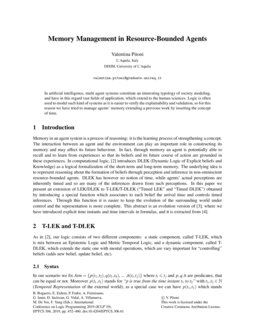 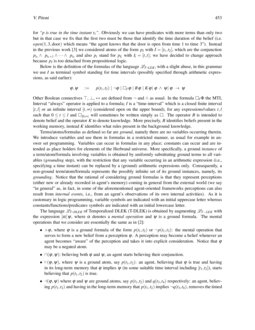 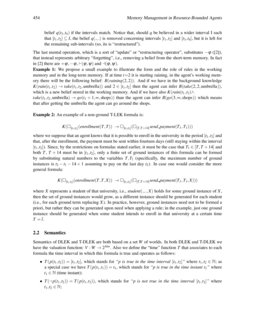 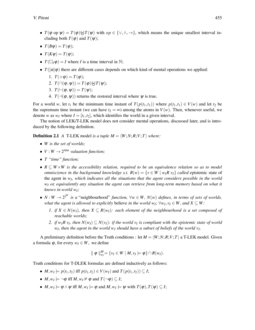 A Temporal Module for Logical Frameworks

Modeling and Verification of a Multi-Agent Argumentation System using NuSMV

A Multi-Agent System is a distributed system where the agents or nodes p...
Philippe De Wilde, et al. ∙

What Do We Want From Explainable Artificial Intelligence (XAI)? – A Stakeholder Perspective on XAI and a Conceptual Model Guiding Interdisciplinary XAI Research

To predict the employee attrition beforehand and to enable management to...
Aasheesh Barvey, et al. ∙

Memory in an agent system is a process of reasoning: it is the learning process of strengthening a concept. The interaction between an agent and the environment can play an important role in constructing its memory and may affect its future behaviour. In fact, through memory an agent is potentially able to recall and to learn from experiences so that its beliefs and its future course of action are grounded in these experiences. In computational logic, [3] introduces DLEK (Dynamic Logic of Explicit beliefs and Knowledge) as a logical formalization of the short-term and long-term memory. The underlying idea is to represent reasoning about the formation of beliefs through perception and inference in non-omniscient resource-bounded agents. DLEK has however no notion of time, while agents’ actual perceptions are inherently timed and so are many of the inferences drawn from such perceptions. In this paper we present an extension of LEK/DLEK to T-LEK/T-DLEK (“Timed LEK” and “Timed DLEK”) obtained by introducing a special function which associates to each belief the arrival time and controls timed inferences. Through this function it is easier to keep the evolution of the surrounding world under control and the representation is more complete. This abstract is an evolution version of [4], where we have introduced explicit time instants and time intervals in formulas, and it is extracted from [5].

As in [3], our logic consists of two different components: a static component, called T-LEK, which is mix between an Epistemic Logic and Metric Temporal Logic, and a dynamic component, called T-DLEK, which extends the static one with mental operations, which are vary important for “controlling” beliefs (adds new belief, update belief, etc).

Below is the definition of the formulas of the language L_T-LEK, with a slight abuse, in this grammar we use I as terminal symbol standing for time intervals (possibly specified through arithmetic expressions, as said earlier):

Other Boolean connectives ⊤, ⊥, ↔ are defined from ¬ and ∧ as usual. In the formula □_IΦ the MTL Interval “always” operator is applied to a formula; I is a “time-interval” which is a closed finite interval [t,l] or an infinite interval [t,∞) (considered open on the upper bound), for any expressions/values t,l such that 0≤t≤l and □_[0,∞) will sometimes be written simply as □. The operator B is intended to denote belief and the operator K to denote knowledge. More precisely, B identifies beliefs present in the working memory, instead K identifies what rules present in the background knowledge.

Terms/atoms/formulas as defined so far are ground, namely there are no variables occurring therein. We introduce variables and use them in formulas in a restricted manner, as usual for example in answer set programming. Variables can occur in formulas in any place; constants can occur and are intended as place holders for elements of the Herbrand universe. More specifically, a ground instance of a term/atom/formula involving variables is obtained by uniformly substituting ground terms to all variables (grounding step), with the restriction that any variable occurring in an arithmetic expression (i.e., specifying a time instant) can be replaced by a (ground) arithmetic expressions only. Consequently, a non-ground term/atom/formula represents the possibly infinite set of its ground instances, namely, its grounding. Notice that the rational of considering ground formulas is that they represent perceptions (either new or already recorded in agent’s memory) coming in general from the external world (we say “in general” as, in fact, in some of the aforementioned agent-oriented frameworks perceptions can also result from internal events

The language L_T-DLEK of Temporalized DLEK (T-DLEK) is obtained by augmenting L_T−LEK with the expression [α]ψ, where α denotes a mental operation and ψ is a ground formula. The mental operations that we consider are essentially the same as in [3]:

The last mental operation, which is a sort of “update” or “restructuring operator”, substitutes −φ ([3]), that instead represents arbitrary “forgetting”, i.e., removing a belief from the short-term memory. In fact in [3] there are +φ, −φ, ⊢(φ,ψ) and ⊣(φ,ψ).

Example 1: We propose a small example to illustrate the form and the role of rules in the working memory and in the long-term memory. If at time t=2 it is starting raining, in the agent’s working memory there will be the following belief: B(raining(2,2)). And if we have in the background knowledge K(rain(t_1,t_2)→take(t_1,t_2,umbrella)) and 2∈[t_1,t_2] then the agent can infer B(take(2,2,umbrella)), which is a new belief stored in the working memory. And if we have also K(rain(t_1,t_2)∧ take(t_1,t_2,umbrella)→go(t_1+1,∞,% shops)) than the agent can infer B(go(3,∞,shops)) which means that after getting the umbrella the agent can go around the shops.

Example 2: An example of a non-ground T-LEK formula is:

where we suppose that an agent knows that it is possible to enroll in the university in the period [t_1,t_2] and that, after the enrollment, the payment must be sent within fourteen days (still staying within the interval [t_1,t_2]). Since, by the restrictions on formulas stated earlier, it must be the case that T_1∈[T,T+14] and both T, T+14 must be in [t_1,t_2], only a finite set of ground instances of this formula can be formed by substituting natural numbers to the variables T,T_1 (specifically, the maximum number of ground instances is t_2−t_1−14+1 assuming to pay on the last day t_2). In case one would consider the more general formula:

Semantics of DLEK and T-DLEK are both based on a set W of worlds. In both DLEK and T-DLEK we have the valuation function: V:W→2Atm. Also we define the “time” function T that associates to each formula the time interval in which this formula is true and operates as follows:

The notion of LEK/T-LEK model does not consider mental operations, discussed later, and is introduced by the following definition.

A preliminary definition before the Truth conditions : let M=⟨W;N;R;V;T⟩ a T-LEK model. Given a formula φ, for every w_I∈W,  we define

Truth conditions for T-DLEK formulas are defined inductively as follows:

In particular, considering formulas of the forms Bφ and Kφ, we observe that M,w_I⊨Bφ if the set ∥φ∥M_w_I of worlds reachable from w_I which entail φ in the very same model M belongs to the neighbourhood N(w_I) of w_I. Hence, knowledge pertains to formulas entailed in model M in every reachable world, while beliefs pertain to formulas entailed only in some set of them, where this set must however belong to the neighbourhood and so it must be composed of reachable worlds. Thus, an agent is seen as omniscient with respect to knowledge, but not with respect to beliefs.

We write ⊨_T-DLEKφ to denote that φ is true in all worlds w_I, of every TLEK model M.

Example 3: Let us consider the example of a person who is married or divorced, where s(he) can perform the action to be married or divorced. Let us assume that performed actions are recorded among an agent’s perceptions, with the due time stamp. For reader’s convenience, actions are denoted using a suffix “A”. For simplicity, actions are supposed to always succeed and to produce an effect within one time instant. Let us consider the following rules (kept in long-term memory):

Let us now assume that a person married, e.g., at time 5; then, a belief will be formed of the person is married from time 6 on; however, if that person later divorced, e.g., at time 8, as a consequence result that s(he) is divorced from time 9. It can be seen that the application of previous rules in consequence of an agent’s action of marring/divorcing determines some “belief restructuring” in the short-term memory of the agent. In absence of other rules concerning marriage, we intend that a person can not be simultaneously married and divorced. The related belief update is determined by the following rules:

With the above timing, the result of their application is that the belief formed at time 5, i.e., married(6,∞) will be replaced by married(6,8) plus divorced(9,∞).

Property 1: For the mental operations previously considered we have the following (where φ,ψ are as explained earlier):

The logic T-DLEK can be axiomatized as an extension of the axiomatization of DLEK as follows. We implicitly assume modus ponens, standard axioms for classical propositional logic, and the necessitation rule. The T-LEK axioms are the following:

The axiomatization of T-DLEK, involves these axioms:

We write T-DLEK⊢φ to indicate that φ is a theorem of TDLEK.

Both logics T-LEK and T-DLEK are sound for the class of T-LEK models. The proof that T-DLEK is strongly complete can be achieved by using a standard canonical model argument.

As stated in Lemma 2 of [3], there are the following immediate consequences of the above definition: if w_I∈W_c and i∈Ag, then

Under the assumption that the interval I is finite, the previous lemmas allow us to prove the following theorems. The limitation to finite intervals is not related to features of the proposed approach, but to well-known paradoxes of temporal logics on infinite intervals.

T-LEK is strongly complete for the class of T-LEK models.

T-DLEK is strongly complete for the class of T-LEK models.

With the new formalization of time intervals proposed in this paper, the proof of the previous Theorem immediately follows from the proof proposed in [3].

In this work we extended an existing approach to the logical modeling of short-term and long-term memories in Intelligent Resource-Bounded Agents by introducing the T function, which manages the interval when an atom is true. Through this function we are also able to assign a “timing” to the epistemic operators B and K. Moreover we add the always operator □_I of the Metric Temporal Logic to increase the expressiveness of our logic. We considered not just adding new beliefs, rather we introduced a new mental operation not provided in DLEK, to allow for removing/restructuring existing beliefs. The resulting T-DLEK logic shares similarities in the underlying principles with hybrid logics (cf., e.g., [2]) and with temporal epistemic logic (cf., e.g., [6]); as concerns the differences, the former has time instants but no time intervals, and the latter has neither time instants nor time intervals.

With regard to complexity for the mono agent case for LEK it has been proved that the satisfiability problem is decidable and it has been proved to be in NP-complete, instead for DLEK it has been conjectured to be PSPACE. It is easy to believe that our extensions cannot spoil decidability because the T function do not interfere. Inference steps to derive new beliefs are analogous to D-LEK: just one modal rule at a time is used and a sharp separation is postulated between the working memory, where inference is performed, and the long-term memory. We are working on the extension to the multi-agent case, also reconsidering the complexity, and on the “Store” operation, which consist in managing the transition from working memory to long term memory.