In order to evaluate, validate, and refine the design of new quantum algorithms or quantum computers, researchers and developers need methods to assess their correctness and fidelity. This requires the capabilities of quantum circuit simulations. However, the number of quantum state amplitudes increases exponentially with the number of qubits, leading to the exponential growth of the memory requirement for the simulations. In this work, we present our memory-efficient quantum circuit simulation by using lossy data compression. Our empirical data shows that we reduce the memory requirement to 16.5 respectively. This finding further suggests that we can simulate deep quantum circuits up to 63 qubits with 0.8 petabytes memory. 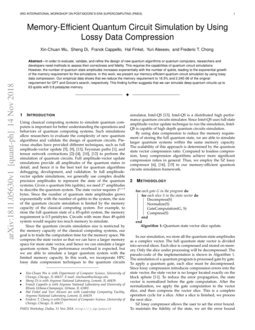 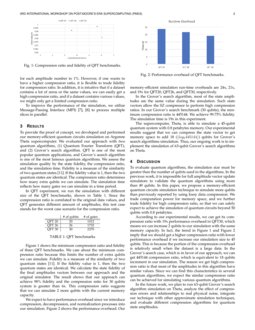 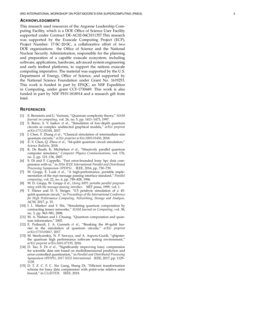 Quantum Supremacy Is Both Closer and Farther than It Appears

As quantum computers improve in the number of qubits and fidelity, the q...
Igor L. Markov, et al. ∙

Using classical computing systems to simulate quantum computers is important for better understanding the operations and behaviors of quantum computing systems. Such simulations allow researchers to evaluate the complexity of new quantum algorithms and validate the design of quantum circuits. Previous studies have provided different techniques, such as full amplitude-vector update

[10, 12, 2, 4, 3] to perform the simulation of quantum circuits. Full amplitude-vector update simulations provide all amplitudes of the quantum states in detail, and hence it is the best tool for quantum algorithms debugging, development, and validation. In full amplitude-vector update simulations, we generally use complex double precision amplitudes to represent the state of the quantum systems. Given n quantum bits (qubits), we need 2n amplitudes to describe the quantum system. The state vector requires 2n+4 bytes. Since the number of quantum state amplitudes grows exponentially with the number of qubits in the system, the size of the quantum circuits simulation is limited by the memory capacity of the classical computing system. For example, to store the full quantum state of a 45-qubit system, the memory requirement is 0.5 petabytes. Circuits with more than 49-qubit system would require too much memory to simulate.

In our simulation, we store all the quantum state amplitudes as a complex vector. The full quantum state vector is divided into several slices. Each slice is compressed and stored on memory. Only the slice under processing will be decompressed. The pseudo-code of the implementation is shown in Algorithm 1. The simulation of a quantum program is processed gate by gate. To apply a quantum gate, each slice must be decompressed. Since lossy compression introduces compression errors into the state vector, the state vector is no longer located exactly on the block sphere [11]. To reduce the error propagation, the state vector is normalized before the gate computation. After the normalization, we apply the gate computation to the vector slice, and then compress the vector slice. This is a complete operation cycle for a slice. After a slice is finished, we process the next slice.

To improve the performance of the simulation, we utilize Message-Passing Interface (MPI) [8, 7] to process multiple slices in parallel.

To provide the proof of concept, we developed and performed our memory-efficient quantum circuits simulation on Argonne Theta supercomputer. We evaluated our approach with two quantum algorithms, (1) Quantum Fourier Transform (QFT), and (2) Grover’s search algorithm. QFT is one of the most popular quantum applications, and Grover’s search algorithm is one of the most famous quantum algorithms. We assess the simulation quality by the state fidelity, the compression ratio, and the simulation time. Fidelity is a measure of the similarity of two quantum states

[11]. If the fidelity value is 1, then the two quantum states are identical. The compression ratio determines how many extra qubits we can simulate. The simulation time reflects how many gates we can simulate in a time period.

To evaluate quantum algorithms, the simulation size must be greater than the number of qubits used in the algorithms. In the previous work, it is impossible for full amplitude vector update simulators to validate the quantum algorithms using more than 49 qubits. In this paper, we propose a memory-efficient quantum circuits simulation technique to simulate more qubits than previously reported by using lossy data compression. We trade computation power for memory space, and we further trade fidelity for high compression ratio, so that we can safely expect to achieve the simulation of quantum circuits beyond 50 qubits with 0.8 petabytes.

In the future work, we plan to run 63-qubit Grover’s search algorithm simulation on Theta, analyze the effect of compression errors and relationships to real physical noise, integrate our technique with other approximate simulation techniques, and evaluate different compression algorithms for quantum state amplitudes.

This research used resources of the Argonne Leadership Computing Facility, which is a DOE Office of Science User Facility supported under Contract DE-AC02-06CH11357.This research was supported by the Exascale Computing Project (ECP), Project Number: 17-SC-20-SC, a collaborative effort of two DOE organizations – the Office of Science and the National Nuclear Security Administration, responsible for the planning and preparation of a capable exascale ecosystem, including software, applications, hardware, advanced system engineering and early testbed platforms, to support the nation’s exascale computing imperative. The material was supported by the U.S. Department of Energy, Office of Science, and supported by the National Science Foundation under Grant No. 1619253. This work is funded in part by EPiQC, an NSF Expedition in Computing, under grant CCF-1730449. This work is also funded in part by NSF PHY-1818914 and a research gift from Intel.