Chinese meme-face is a special kind of internet subculture widely spread in Chinese Social Community Networks. It usually consists of a template image modified by some amusing details and a text caption. In this paper, we present MemeFaceGenerator, a Generative Adversarial Network with the attention module and template information as supplementary signals, to automatically generate meme-faces from text inputs. We also develop a web service as system demonstration of meme-face synthesis. MemeFaceGenerator has been shown to be capable of generating high-quality meme-faces from random text inputs. 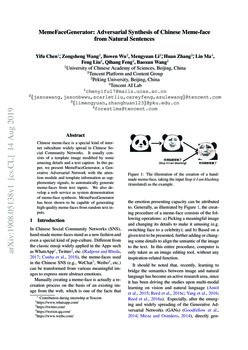 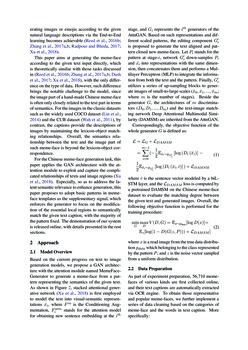 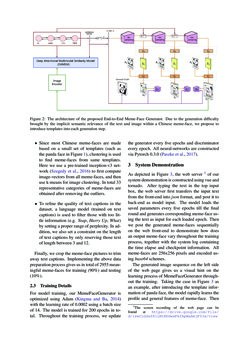 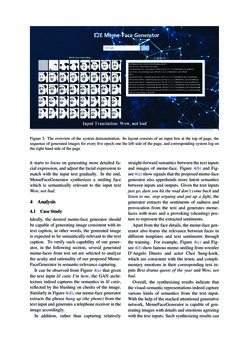 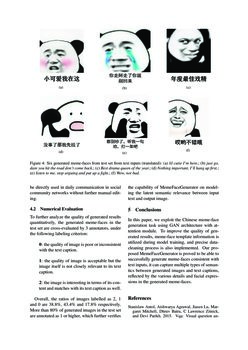 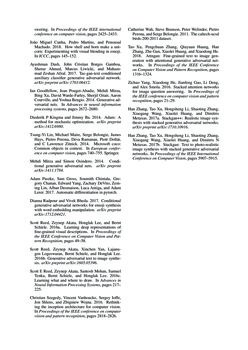 In Chinese Social Community Networks (SNS), hand-made meme-faces stand as a new fashion and even a special kind of pop-culture. Different from the classic emoji widely applied in the Apps such as WhatsApp111https://www.whatsapp.com/, Twitter222https://twitter.com/, etc. Radpour and Bheda (2017); Cunha et al. (2018), the meme-faces used in the Chinese SNS (e.g., WeChat333https://weixin.qq.com/, Weibo444https://www.weibo.com/, etc.) can be transformed from various meaningful images to express more abstract emotions.

Manually creating a meme-face is actually a re-creation process on the basis of an existing image from the web, which is one of the facts that the emotion presenting capacity can be attributed to. Generally, as illustrated by Figure 1, the creating procedure of a meme-face consists of the following operations: a) Picking a meaningful image and changing its details to make it amusing (e.g. switching face to a celebrity); and b) Based on a given text to be presented, further adding or changing some details to align the semantic of the image to the text. In this entire procedure, computer is only taken as an image editing tool, without any inspiration-related function.

This paper aims at generating the meme-face according to the given text input directly, which is theoretically similar with those tasks discussed in Reed et al. (2016b); Zhang et al. (2017a, b); Dash et al. (2017); Xu et al. (2018), with the only difference on the type of data. However, such difference brings the notable challenge to the model, since the image part of a hand-made Chinese meme-face is often only closely related to the text part in terms of semantics. For the images in the classic datasets such as the widely used COCO dataset Lin et al. (2014) and the CUB dataset Wah et al. (2011)

For the Chinese meme-face generation task, this paper applies the GAN architecture with the attention module to exploit and capture the complicated relationships of texts and image regions Xu et al. (2018). Especially, so as to address the latent semantic relevance to enhance generation, this paper proposes to adopt basic patterns in meme-face templates as the supplementary signal, which enforces the generator to focus on the modification of the essential local regions to semantically match the given text caption, with the majority of the pattern fixed. The demonstration of our system is released online, with details presented in the rest sections.

Based on the current progress on text to image generation models, we propose a GAN architecture with the attention module named MemeFaceGenerator to generate a meme-face from a pattern representing the semantics of the given text. As shown in Figure 2, stacked attentional generative network Xu et al. (2018) is first employed to model the text into visual-semantic representations ^xi, where Fca is the Conditioning Augmentation, Fattni

ith stage, and Gi represents the ith generators of the AttnGAN. Based on such representations and different scaled patterns, the editing component G′i is proposed to generate the text aligned and pattern closed new meme-faces. Let Pi stands for the pattern at stage-i, network G′i down-samples Pi and ^xi

into representations with the same dimension, then concatenates them and performs a Multilayer Perceptron (MLP) to integrate the information from both the text and the pattern. Finally,

G′i utilizes a series of up-sampling blocks to generate images of small-to-large scales (¯x0,¯x1,...,¯xm; where m is the number of stages). Beside the generator G, the architectures of m discriminators (D0,D1,...,Dm) and the text-image matching network Deep Attentional Multimodal Similarity (DAMSM) are inherited from the AttnGAN.

Correspondingly, the objective function of the whole generator G is defined as:

is the sentence vector modeled by a biLSTM layer, and the

LDAMSM loss is computed by a pretrained DAMSM on the Chinese meme-face dataset to evaluate the matching degree between the given text and generated images. Overall, the following objective function is performed for the training procedure:

where x is a read image from the true data distribution pdata which belonging to the class represented by the pattern P, and z

is the noise vector sampled from a uniform distribution.

As part of experiment preparation, 56,710 meme-faces of various kinds are first collected online, and their text captions are automatically extracted via OCR engine. To obtain those representative and popular meme-faces, we further implement a series of data cleaning based on the categories of meme-face and the words in text caption. More specifically:

Finally, we crop the meme-face pictures to trim away text captions. Implementing the above data preparation process gives us in total of 2955 meaningful meme-faces for training (90%) and testing (10%).

For model training, our MemeFaceGenerator is optimized using Adam Kingma and Ba (2014)

with the learning rate of 0.0002 using a batch size of 14. The model is trained for 200 epochs in total. Throughout the training process, we update the generator every five epochs and discriminator every epoch. All neural-networks are constructed via Pytorch 0.3.0

As depicted in Figure 3, the web server 555The screen recording of the web page can be found at https://drive.google.com/file/d/1ewCLGds681LNtRDdwxPkfApWaAmjF03x/view of our system demonstration is constructed using vue and tornado. After typing the text in the top input box, the web server first transfers the input text from the front-end into json format, and post it to back-end as model input. The model loads the saved parameters every five epochs till the final round and generates corresponding meme-face using the text as input for each loaded epoch. Then we post the generated meme-faces sequentially on the web front-end to demonstrate how does an output meme-face vary throughout the training process, together with the system log containing the time elapse and checkpoint information. All meme-faces are 256x256 pixels and encoded using base64 schemes.

The generated image sequence on the left side of the web page gives us a visual hint on the learning process of MemeFaceGenerator throughout the training. Taking the case in Figure 3 as an example, after introducing the template information of panda face, the model rapidly learns the profile and general features of meme-face. Then it starts to focus on generating more detailed facial expression, and adjust the facial expression to match with the input text gradually. In the end, MemeFaceGenerator synthesizes a smiling face which is semantically relevant to the input text Wow, not bad.

Ideally, the desired meme-face generator should be capable of generating image consistent with its text caption, in other words, the generated image is expected to be semantically-relevant to the text caption. To verify such capability of our generator, in the following section, several generated meme-faces from test set are selected to analyze the acuity and rationality of our proposed MemeFaceGenerator in semantic-relevance capturing.

It can be observed from Figure 4 that given the text input lil cutie I’m here, the GAN architecture indeed captures the semantics in lil cutie, reflected by the blushing on cheeks of the image. Similarly in Figure 4, our meme-face generator extracts the phrase hang up (the phone) from the text input and generates a telephone receiver in the image accordingly.

In addition, rather than capturing relatively straight-forward semantics between the text inputs and images of meme-face, Figure 4 and Figure 4 show signals that the proposed meme-face generator also apprehends more latent semantics between inputs and outputs. Given the text inputs just go, dare you hit the road don’t come back and listen to me, stop arguing and put up a fight, the generator extracts the sentiments of sadness and provocation from the text and generates meme-faces with tears and a provoking (shouting) posture to represent the extracted sentiments.

Apart from the face details, the meme-face generator also learns the relevance between faces in different templates and text sentiments through the training. For example, Figure 4 and Figure 4 show famous meme-smiling from wrestler D’Angelo Dinero and actor Choi Sung-kook, which are consistent with the ironic and complimentary emotions in their corresponding text inputs Best drama queen of the year and Wow, not bad.

Overall, the synthesizing results indicate that the visual-semantic representations indeed capture various kinds of semantics from the text input. With the help of the stacked attentional generative network, MemeFaceGenerator is capable of generating images with details and emotions agreeing with the text inputs. Such synthesizing results can be directly used in daily communication in social community networks without further manual editing.

To further analyze the quality of generated results quantitatively, the generated meme-faces in the test set are cross-evaluated by 3 annotators, under the following labeling criterion:

Overall, the ratios of images labelled as 2, 1 and 0 are 38.8%, 43.4% and 17.8% respectively. More than 80% of generated images in the test set are annotated as 1 or higher, which further verifies the capability of MemeFaceGenerator on modeling the latent semantic relevance between input text and output image.

In this paper, we exploit the Chinese meme-face generation task using GAN architecture with attention module. To improve the quality of generated results, meme-face template information is utilized during model training, and precise data-cleaning process is also implemented. Our proposed MemeFaceGenerator is proved to be able to successfully generate meme-faces consistent with text inputs, it can capture multiple types of semantics between generated images and text captions, reflected by the various details and facial expressions in the generated meme-faces.