Image denoising is an important pre-processing step in medical image analysis. Different algorithms have been proposed in past three decades with varying denoising performances. More recently, having outperformed all conventional methods, deep learning based models have shown a great promise. These methods are however limited for requirement of large training sample size and high computational costs. In this paper we show that using small sample size, denoising autoencoders constructed using convolutional layers can be used for efficient denoising of medical images. Heterogeneous images can be combined to boost sample size for increased denoising performance. Simplest of networks can reconstruct images with corruption levels so high that noise and signal are not differentiable to human eye. 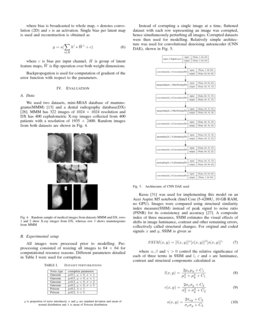 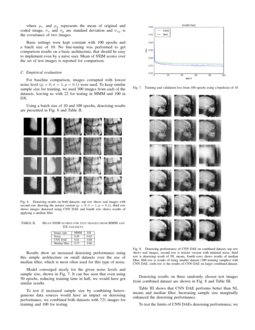 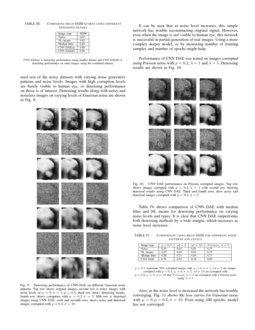 Do Noises Bother Human and Neural Networks In the Same Way? A Medical Image Analysis Perspective

Printed Circuit boards (PCBs) are one of the most important stages in ma...
Saeed Khalilian, et al. ∙

Is it possible to recover an image from its noisy version using convolut...
Nithish Divakar, et al. ∙

Medical imaging including X-rays, Magnetic Resonance Imaging (MRI), Computer Tomography (CT), ultrasound etc. are susceptible to noise [21]. Reasons vary from use of different image acquisition techniques to attempts at decreasing patients exposure to radiation. As the amount of radiation is decreased, noise increases [1]. Denoising is often required for proper image analysis, both by humans and machines.

Image denoising, being a classical problem in computer vision has been studied in detail. Various methods exist, ranging from models based on partial differential equations (PDEs)

Where z is the noisy image produced as a sum of original image x and some noise y. Most methods try to approximate x using z as close as possible. IN most cases, y is assumed to be generated from a well defined process.

With recent developments in deep learning [14, 11, 23, 2, 10], results from models based on deep architectures have been promising. Autoencoders have been used for image denoising [24, 25, 28, 5]. They easily outperform conventional denoising methods and are less restrictive for specification of noise generative processes. Denoising autoencoders constructed using convolutional layers have better image denoising performance for their ability to exploit strong spatial correlations.

In this paper we present empirical evidence that stacked denoising autoencoders built using convolutional layers work well for small sample sizes, typical of medical image databases. Which is in contrary to the belief that for optimal performance, very large training datasets are needed for models based on deep architectures. We also show that these methods can recover signal even when noise levels are very high, at the point where most other denoising methods would fail.

Rest of this paper is organized as following, next section discusses related work in image denoising using deep architectures. Section III introduces autoencoders and their variants. Section IV explains our experimental set-up and details our empirical evaluation and section V presents our conclusions and directions for future work.

Although BM3D [7] is considered state-of-the-art in image denoising and is a very well engineered method, Burger et al. [4]

proposed image denoising using convolutional neural networks. It was observed that using a small sample of training images, performance at par or better than state-of-the-art based on wavelets and Markov random fields can be achieved. Xie et al.

An autoencoder is a type of neural network that tries to learn an approximation to identity function using backpropagation, i.e. given a set of unlabeled training inputs

and maps(encode) it to a hidden representation

y∈[0,1]d′ using deterministic mapping, such as

where s can be any non linear function. Latent representation y is then mapped back(decode) into a reconstruction z, which is of same shape as x using similar mapping.

In (4), prime symbol is not a matrix transpose. Model parameters (W,W′,b,b′

) are optimized to minimize reconstruction error, which can be assessed using different loss functions such as squared error or cross-entropy.

Basic architecture of an autoencoder is shown in Fig. 1 [32]

Here layer L1 is input layer which is encoded in layer L2 using latent representation and input is reconstructed at L3.

Basic architecture of a denoising autoencoder is shown in Fig. 2

Output from the layer below is fed to the current layer and training is done layer wise.

In convolutional autoencoders, weights are shared among all input locations which helps preserve local spatiality. Representation of ith feature map is given as

where bias is broadcasted to whole map, ∗ denotes convolution (2D) and s is an activation. Single bias per latent map is used and reconstruction is obtained as

where c is bias per input channel, H is group of latent feature maps, ~W is flip operation over both weight dimensions.

Backpropogation is used for computation of gradient of the error function with respect to the parameters.

All images were processed prior to modelling. Pre-processing consisted of resizing all images to 64 × 64 for computational resource reasons. Different parameters detailed in Table I were used for corruption.

Instead of corrupting a single image at a time, flattened dataset with each row representing an image was corrupted, hence simultaneously perturbing all images. Corrupted datasets were then used for modelling. Relatively simple architecture was used for convolutional denoising autoencoder (CNN DAE), shown in Fig. 5.

Keras [31] was used for implementing this model on an Acer Aspire M5 notebook (Intel Core i5-4200U, 10 GB RAM, no GPU). Images were compared using structural similarity index measure(SSIM) instead of peak signal to noise ratio (PSNR) for its consistency and accuracy [27]

. A composite index of three measures, SSIM estimates the visual effects of shifts in image luminance, contrast and other remaining errors, collectively called structural changes. For original and coded signals

x and y, SSIM is given as

where α,β and γ>0 control the relative significance of each of three terms in SSIM and l, c and s are luminance, contrast and structural components calculated as

where μx and μy represents the mean of original and coded image, σx and σy are standard deviation and σxy is the covariance of two images.

Basic settings were kept constant with 100 epochs and a batch size of 10. No fine-tuning was performed to get comparison results on a basic architecture, that should be easy to implement even by a naive user. Mean of SSIM scores over the set of test images is reported for comparison.

For baseline comparison, images corrupted with lowest noise level (μ=0,σ=1,p=0.1) were used. To keep similar sample size for training, we used 300 images from each of the datasets, leaving us with 22 for testing in MMM and 100 in DX.

Using a batch size of 10 and 100 epochs, denoising results are presented in Fig. 6 and Table II.

Results show an increased denoising performance using this simple architecture on small datasets over the use of median filter, which is most often used for this type of noise.

Model converged nicely for the given noise levels and sample size, shown in Fig. 7. It can bee seen that even using 50 epochs, reducing training time in half, we would have got similar results.

To test if increased sample size by combining heterogeneous data sources would have an impact on denoising performance, we combined both datasets with 721 images for training and 100 for testing.

To test the limits of CNN DAEs denoising performance, we used rest of the noisy datasets with varying noise generative patterns and noise levels. Images with high corruption levels are barely visible to human eye, so denoising performance on those is of interest. Denoising results along with noisy and noiseless images on varying levels of Gaussian noise are shown in Fig. 9.

It can be seen that as noise level increases, this simple network has trouble reconstructing original signal. However, even when the image is not visible to human eye, this network is successful in partial generation of real images. Using a more complex deeper model, or by increasing number of training samples and number of epochs might help.

Performance of CNN DAE was tested on images corrupted using Poisson noise with p=0.2, λ=1 and λ=5. Denoising results are shown in Fig. 10.

Table IV shows comparison of CNN DAE with median filter and NL means for denoising performance on varying noise levels and types. It is clear that CNN DAE outperforms both denoising methods by a wide margin, which increases as noise level increases.

Also, as the noise level is increased the network has trouble converging. Fig. 11 shows the loss curves for Gaussian noise with μ=0,p=0.2,σ=10. Even using 100 epochs, model has not converged.

Our future work would focus on finding an optimal architecture for small sample denoising. We would like to investigate similar architectures on high resolution images and the use of other image denoising methods such as singular value decomposition (SVD) and median filters for image pre-processing before using CNN DAE, in hope of boosting denoising performance. It would also be of interest, if given only a few images can we combine them with other readily available images from datasets such as ImageNet