Risk adjustment has become an increasingly important tool in healthcare. It has been extensively applied to payment adjustment for health plans to reflect the expected cost of providing coverage for members. Risk adjustment models are typically estimated using linear regression, which does not fully exploit the information in claims data. Moreover, the development of such linear regression models requires substantial domain expert knowledge and computational effort for data preprocessing. In this paper, we propose a novel approach for risk adjustment that uses semantic embeddings to represent patient medical histories. Embeddings efficiently represent medical concepts learned from diagnostic, procedure, and prescription codes in patients' medical histories. This approach substantially reduces the need for feature engineering. Our results show that models using embeddings had better performance than a commercial risk adjustment model on the task of prospective risk score prediction. 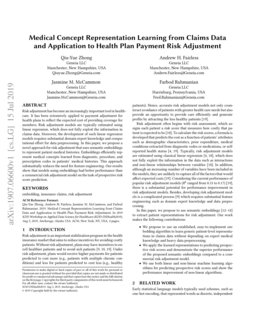 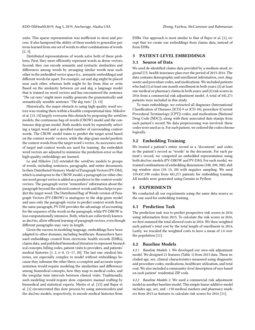 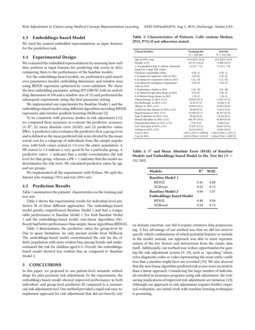 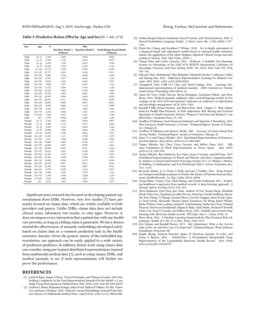 Distributed representation of patients and its use for medical cost prediction

Risk adjustment often begins with risk assessment, which assigns each patient a risk score that measures how costly that patient is expected to be (Hileman et al., 2016). To calculate the risk scores, a formula is developed that predicts the cost as a function of patients’ attributes such as demographic characteristics, prior expenditure, medical conditions extracted from diagnostic codes or medications, or self-reported health status (Chang and Weiner, 2010; Schone and Brown, 2013). Typically, risk adjustment models are estimated using classical linear regression (Rose, 2016; Chang and Weiner, 2010), which does not fully exploit the information in the data such as interactions and non-linear relationships between variables (Rose, 2016). In addition, although an increasing number of variables have been included in the models, they are unlikely to capture all of the factors that would affect expected costs (Schone and Brown, 2013). Considering the current performance of popular risk adjustment models (R2 ranged from 0.15 to 0.17) (Schone and Brown, 2013), there is a substantial potential for performance improvement in risk adjustment models. Besides, developing risk adjustment models is a complicated process (Ellis et al., 2018) which requires substantial feature engineering such as domain expert knowledge and data preprocessing.

Early statistical language models typically used schemes, such as one-hot encoding, that represented words as discrete, independent units. This sparse representation was inefficient to store and process. It also hampered the ability of these models to generalize patterns learned from one set of words to other combinations of words

Distributed representations of words solve both of these problems. First, they more efficiently represent words as dense vectors. Second, they can encode semantic and syntactic similarities and differences among words by arranging similar words near each other in the embedded vector space (i.e., semantic embeddings) and different words far apart. For example, cat and dog might be placed near each other, whereas both might be far from blue or write. Based on the similarity between cat and dog, a language model that is trained on word vectors and has encountered the sentence ”The cat runs.” might more readily generate the grammatically and semantically sensible sentence ”The dog runs.” (Bengio et al., 2003; Mikolov et al., 2013a)

Historically, the major obstacle to using high-quality word vectors was creating them within a feasible computational time. Mikolov et al. (Mikolov et al., 2013a; Mikolov et al., 2013b) largely overcame this obstacle by proposing the word2vec models, the continuous bag-of-words (CBOW) model and the continuous skip-gram model. Both models work by repeatedly selecting a target word and a specified number of surrounding context words. The CBOW model trains to predict the target word based on the context words’ vectors, while the skip-gram model predicts the context words from the target word’s vector. As successive sets of target and context words are used for training, the embedded word vectors are adjusted to minimize the prediction error so that high-quality embeddings are learned.

Le and Mikolov (Le and Mikolov, 2014) extended the word2vec models to groups of words, including sentences, paragraphs, and entire documents. In their Distributed Memory Model of Paragraph Vectors (PV-DM), which is analogous to the CBOW model, a paragraph (or other chosen word group) vector is added as a predictor to the context words’ vectors. The paragraph vector ”remembers” information about the paragraph beyond the selected context words and thus helps to predict the target word. The Distributed Bag of Words version of Paragraph Vectors (PV-DBOW) is analogous to the skip-gram model and uses only the paragraph vector to predict context words from the same paragraph. PV-DM provides the advantage of accounting for the sequence of the words in the paragraph, while PV-DBOW is less computationally intensive. Both, which are collectively known as doc2vec, allow efficient learning of paragraph vectors, even though different paragraphs may vary in length.

circumvented this slow process by using autoencoders and the

doc2vec models, respectively, to encode medical histories from EHRs. Our approach is most similar to that of Bajor et al. (Bajor et al., 2018), except that we create our embeddings from claims data, instead of from EHRs.

We used de-identified claims data provided by a medium-sized, regional U.S. health insurance plan over the period of 2015-2016. The data contains demographic and enrollment information, cost, diagnostic and procedure codes, and medications. We included patients who had (1) at least one month enrollment in both years; (2) at least one medical or pharmacy claims in both years; and (3) risk scores in 2016 from a commercial risk adjustment model. A total of 441,271 patients were included in this study.

To train embeddings, we extracted all diagnoses (International Classification of Diseases [ICD]-9 or ICD-10), procedure (Current Procedural Terminology [CPT]) codes, and medications (National Drug Code [NDC]), along with their associated date stamps from each patient’s record. No data preprocessing was involved: these codes were used as-is. For each patient, we ordered the codes chronologically.

We treated a patient’s entire record as a ”document,” and codes in the patient’s record as ”words” in the document. For each patient’s record, we computed an embedded representation using both doc2vec models (PV-DBOW and PV-DM). For each model, we trained combinations of embedding dimensions (100, 200, 300), sliding window sizes (10, 15, 20) with negative sampling. We used 159,457,590 codes from 441,271 patients for embedding training. All models were generated using Gensim in Python.

We conducted all our experiments using the same data source as the one used for embedding training.

The prediction task was to predict prospective risk scores in 2016 using information from 2015. To calculate the risk scores in 2016, we first summed the total allowed costs in 2016. We then weighted each patient’s total cost by the total length of enrollment in 2016. Lastly, we rescaled the weighted costs to have a mean of 1.0 over the population (Hileman and Steele, 2007).

We developed our own risk adjustment model. We designed 21 features (Table 1) from 2015 data. These included age, sex, clinical characteristics measured using diagnostic and procedure codes, medications, healthcare utilization, and total cost. We also included a community-level description of race based on each patient’ residential ZIP code.

We used a commercial risk adjustment model as another baseline model. This simple linear-additive model includes age, sex, and ∼150 medical markers and pharmacy markers from 2015 as features to calculate risk scores for 2016 (Hileman and Steele, 2007).

We used the trained embedded representations as input features for the prediction task.

We evaluated the embedded representations by assessing how well they perform as input features for predicting risk scores in 2016, comparing them to the performance of the baseline models.

To be consistent with previous studies in risk adjustment (Hileman and Steele, 2007), we computed three measures to evaluate the predictive accuracy: (1) R2; (2) mean absolute error (MAE); and (3) predictive ratios (PRs). A predictive ratio evaluates the predictive fit at a group level and is defined as the mean predicted risk score divided by the mean actual cost for a subgroup of individuals from the sample population, with both values scaled to 1.0 over the entire population. A PR closest to 1.0 indicate a very good fit for a particular group. A predictive ratio>1 indicates that a model overestimates the risk level for that group, whereas a PR <1 indicates that the model underestimates the risk level. We calculated predictive ratios by age and sex groups.

We implemented all the experiments with Python. We split the dataset into training (70%) and test (30%) sets.

Table 1 summarizes the patients’ characteristics in the training and test sets.

Table 3 demonstrates the predictive ratios for group-level fit. Due to space limitation, we only present results from XGBoost. The embeddings-based model overestimated the risk for the elderly population with more evident bias among female and underestimated the risk for children aged 0-2. Overall, the embeddings-based model showed less evident bias as compared to Baseline Model 2.

In this paper, we proposed to use patient-level semantic embeddings for plan payment risk adjustment. In the experiments, the embeddings-based model showed improved performance in both individual- and group-level predictive fit compared to a commercial risk adjustment tool. Our method provided a rapid and easy-to-implement approach for risk adjustment that did not heavily rely on domain expertise, nor did it require extensive data preprocessing. A key advantage of our method was that we did not need to specify which combinations of which potential features to include in the model; instead, our approach was able to learn representations of the key factors and interactions from the claims data itself. Additionally, our method may reduce opportunities for gaming the risk adjustment system (Ellis et al., 2018; Rose, 2016), such as ”upcoding” where extra diagnostic codes or codes representing the most costly condition that a member might have are recorded (Schone and Brown, 2013). We also showed that the non-linear algorithm predicted risk scores more accurately than a linear approach. Considering the large number of individuals enrolled in insurance programs using risk adjustment, the cost-saving implications of improved risk adjustment are immense (Rose, 2016). Although our approach to risk adjustment requires further empirical evaluation, our initial work with machine learning techniques is promising.

Significant prior research has focused on developing patient representations from EHRs. However, very few studies (Choi et al., 2016b) have primarily focused on claims data, which are widely available to both providers and payers. Unlike EHRs, claims data does not include clinical notes, laboratory test results, or vital signs. However, it does encompass every interaction that a patient has with any healthcare provider, as long as a billing claim is generated. We have demonstrated the effectiveness of semantic embeddings developed solely based on claims data in a common prediction task in the health insurance domain. Given the generic nature of the embedded representation, our approach can be easily applied to a wide variety of prediction problems. In addition, future work using claims data can consider using pre-trained distributed representations learned from multimodal medical data (Beam et al., 2018), such as using claims, EHRs, and medical journals, to see if such representations will further improve the performance.