In this paper, we consider infinite number of non atomic self-interested agents with private valuation of a divisible good. We design a pricing mechanism that is easy to implement, is individually rational, weakly budget balanced and incentive compatible. In this mechanism, agents send reports of their types, based on which, the designer solves a constrained optimization problem through Lagrange's mechanism. The resulting optimal allocation and Lagrange's multiplier is sent as the allocation and prices to the respective agent. We show that reporting one's type truthfully is a dominant strategy of the players in this mechanism. We then extend this idea to the dynamic case, when player's types are dynamically evolving as a controlled Markov process. In this case, in each time period, reporting one's type is a dominant strategy of the players. 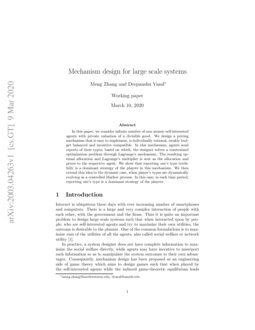 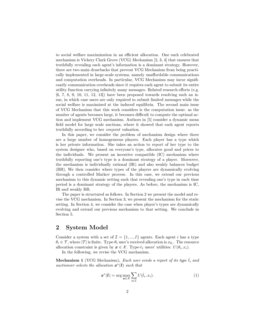 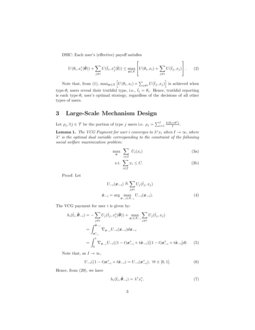 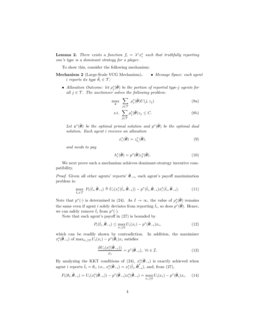 Truthful Bilateral Trade is Impossible even with Fixed Prices

A seminal theorem of Myerson and Satterthwaite (1983) proves that, in a ...
Erel Segal-Halevi, et al. ∙

Internet is ubiquitous these days with ever increasing number of smartphones and computers. There is a large and very complex interaction of people with each other, with the government and the firms. Thus it is quite an important problem to design large scale systems such that when interacted upon by people, who are self-interested agents and try to maximize their own utilities, the outcome is desirable to the planner. One of the common formulations is to maximize sum of the utilities of all the agents, also called social welfare or network utility [1].

In practice, a system designer does not have complete information to maximize the social welfare directly, while agents may have incentive to misreport such information so as to manipulate the system outcomes to their own advantages. Consequently, mechanism design has been proposed as an engineering side of game theory which aims to design games such that when played by the self-interested agents while the induced game-theoretic equilibrium leads to social welfare maximization in an efficient allocation. One such celebrated mechanism is Vickery Clark Grove (VCG) Mechanism

[2, 3, 4] that ensures that truthfully revealing each agent’s information is a dominant strategy. However, there are two main drawbacks that prevent VCG Mechanism from being practically implemented in large-scale systems, namely unaffordable communications and computation overheads. In particular, VCG Mechanism may incur significantly communication overheads since it requires each agent to submit its entire utility function carrying infinitely many messages. Related research efforts (e.g. [6, 7, 8, 9, 10, 11, 12, 13]) have been proposed towards resolving such an issue, in which case users are only required to submit limited messages while the social welfare is maximized at the induced equilibria. The second main issue of VCG Mechanism that this work considers is the computation issue: as the number of agents becomes large, it becomes difficult to compute the optimal action and implement VCG mechanism. Authors in [5] consider a dynamic mean field model for large scale auctions, where it showed that each agent reports truthfully according to her conjoint valuation.

In this paper, we consider the problem of mechanism design where there are a large number of homogeneous players. Each player has a type which is her private information. She takes an action to report of her type to the system designer who, based on everyone’s type, allocates good and prices to the individuals. We present an incentive compatible (IC) mechanism where truthfully reporting one’s type is a dominant strategy of a player. Moreover, the mechanism is individually rational (IR) and also weakly balances budget (BB). We then consider where types of the players are dynamically evolving through a controlled Markov process. In this case, we extend our previous mechanism to this dynamic setting such that revealing one’s type in each time period is a dominant strategy of the players. As before, the mechanism is IC, IR and weakly BB.

Consider a system with a set of I={1,...,I} agents. Each agent i has a type θi∈T, where |T| is finite. Type-θi user’s received allocation is xθi. The resource allocation constraint is given by x∈X. Type-t1 users’ utilities: U(θi,xi).

In the following, we revise the VCG mechanism.

Note that, from (1), maxx∈X[U(θi,xi)+∑j≠iU(~tj,xj)] is achieved when type-θi users reveal their truthful type, i.e., ~ti=θi. Hence, truthful reporting is each type-θi user’s optimal strategy, regardless of the decisions of all other types of users.

The VCG Payment for user i converges to λ∗xi when I→∞, where λ∗ is the optimal dual variable corresponding to the constraint of the following social welfare maximization problem:

The VCG payment for user i is given by:

There exists a function fi=λ∗x∗i such that truthfully reporting one’s type is a dominant strategy for a player.

To show this, consider the following mechanism:

We next prove such a mechanism achieves dominant-strategy incentive compatibility.

Given all other agents’ reports’ ~θ−i, each agent’s payoff maximization problem is:

Note that each agent’s payoff in (27) is bounded by

which can be readily shown by contradiction. In addition, the maximizer xoi(~θ−i) of maxxi≥0Ui(xi)−p∗(~θi)xi satisfies

The dual variable p∗(~θ) is positive, and so is every user i’s payment hi(~θ). This shows that weakly BB is satisfied.

From (14), each agent’s payoff when truthful reporting satisfies

which shows that IR is achieved. ∎

In this section, we generalize the idea of the large-scale mechanism into dynamic environments.

The utility function ui of agent i is

All agents discount the future with a common discount factor δ∈(0,1). The socially efficient policy is obtained by maximizing the expected discounted of valuations.

Define an optimum policy of the designer zot as

Also define for a Markovian policy σ for a user, her utility to go Uσi(zi,t,θi,t,ρt) such that, for zi,t=σ(θi,t,ρt),

W(ρt) can be rewritten as

Given all other agents’ reports’ ~θ−i, each agent’s payoff to go maximization problem is:

Note that each agent’s payoff in (27) is bounded by

which can be readily shown by contradiction. In addition, the maximizer xoi,t(~θ−i) of maxxi,t≥0U(θi,t,zi,t,ρt)−p∗t(~θi)zi,t satisfies

The dual variable p∗t(~θ) is positive, and so is every user i’s payment hi,t(~θt). This shows that weakly BB is satisfied.

From (14), each agent’s payoff when truthful reporting satisfies

which shows that IR is achieved. ∎

In this paper, we considered both static and dynamic models where players have private types that parameterize their utilities. We presented mechanisms that incentivize the users to reveal their private types, which are incentive compatible, individually rational and weakly budget balanced.