Data uniformity is a concept associated with several semantic data characteristics such as lack of features, correlation and sample bias. This article introduces a novel measure to assess data uniformity and detect uniform pointsets on high-dimensional Euclidean spaces. Spatial uniformity measure builds upon the isomorphism between hyperspherical chords and L2-normalised data Euclidean distances, which is implied by the fact that, in Euclidean spaces, L2-normalised data can be geometrically defined as points on a hypersphere. The imposed connection between the distance distribution of uniformly selected points and the hyperspherical chord length distribution is employed to quantify uniformity. More specifically,, the closed-form expression of hypersphere chord length distribution is revisited extended, before examining a few qualitative and quantitative characteristics of this distribution that can be rather straightforwardly linked to data uniformity. The experimental section includes validation in four distinct setups, thus substantiating the potential of the new uniformity measure on practical data-science applications. 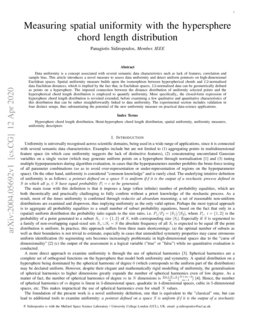 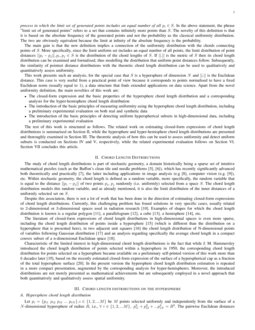 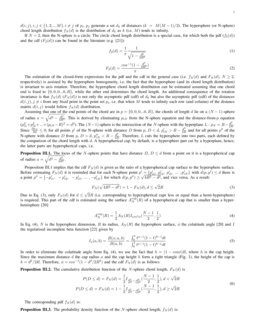 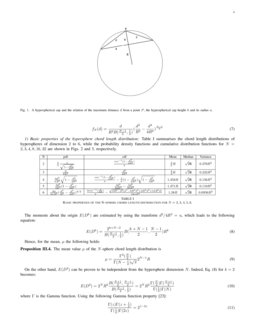 Uniformity is universally recognised across scientific domains, being used in a wide range of applications, since it is connected with several semantic data characteristics. Examples include but are not limited to (1) aggregating points in multidimensional feature space (in which case uniformity suggests the lack of distinctive features), (2) concatenating uncorrelated Gaussian variables on a single vector (which may generate uniform points on a hypersphere through normalisation

The main issue with this definition is that it imposes a large (often infinite) number of probability equalities, which are both theoretically and practically challenging to fully confirm without a priori knowledge of the stochastic process. As a result, most of the times uniformity is confirmed through reductio ad absurdum

P1/P2=|S1|/|S2|, where Pi, i={1,2} is the probability of a point generated to a subset Si, i={1,2} of S, with corresponding size |Si|. Especially if S is segmented to a family of non-overlapping equal-sized sets Si,∪Si=S the absolute frequency of all Si

is expected to be equal iff the point distribution is uniform. In practice, this approach suffers from three main shortcomings: (a) the optimal number of subsets as well as their boundaries is not trivial to estimate, especially in cases that unmodelled symmetry properties may cause erroneous uniform identification (b) segmenting sets becomes increasingly problematic in high-dimensional spaces due to the ”curse of dimensionality”

[2] (c) the output of the assessment is a logical variable (”true” or ”false”) while no quantitative evaluation is conducted.

The foundation of the present work is a novel uniformity definition, one that is equivalent to the ”classical” one, but can lead to additional tools to examine uniformity: a pointset defined on a space S is uniform if-f it is the output of a stochastic process in which the limit set of generated points includes an equal number of all pi∈S. In the above statement, the phrase ”limit set of generated points” refers to a set that contains infinitely more points than S. The novelty of this definition is that it is based on the absolute frequency of the generated points and not the probability as the classical uniformity distribution. The two are obviously equivalent because the limit at infinity of the absolute frequency is the probability.

This work presents such an analysis, for the special case that S is a hypersphere of dimension N and ||.|| is the Euclidean distance. This case is very useful from a practical point of view because it corresponds to points normalised to have a fixed Euclidean norm (usually equal to 1), a data structure that finds extended applications on data science. Apart from the novel uniformity definition, the main novelties of this work are:

The rest of this work is structured as follows. The related work on estimating closed-form expressions of chord length distributions is summarised on Section II, while the hypersphere and hyper-hemisphere chord length distributions are presented and thoroughly examined in Section III. The theoretic analysis of how this can be used to assess uniformity and detect uniform subsets is conducted on Sections IV and V, respectively, while the related experimental evaluation follows on Section VI. Section VII concludes this article.

The study of chord length distributions is part of stochastic geometry, a domain historically being a sparse set of intuitive mathematical puzzles (such as the Buffon’s clean tile and needle problems [5], [6]), which has recently significantly advanced both theoretically and practically [7], the latter including applications in image analysis (e.g [8]

), etc. Within stochastic geometry, the chord length is defined as a random variable, more specifically, the random variable that is equal to the distance

||pi−pj|| of two points pi, pj randomly (i.e. uniformly) selected from a space S. The chord length distribution models this random variable, and as already mentioned, it is also the limit distribution of the inner distances of a uniformly selected set on S.

Despite this association, there is not a lot of work that has been done in the direction of estimating closed-form expressions of chord length distributions. Currently, this challenging problem has found solutions in very specific cases, usually related to 2-dimensional or 3-dimensional spaces used in radiation research [10]. Examples of shapes for which the chord length distribution is known is a regular polygon [11], a parallelogram [12], a cube [13], a hemisphere [14], etc.

[17] and an analysis regarding specifically the average chord length in a compact convex subset of a n-dimensional Euclidean space [18].

The estimation of the closed-form expressions for the pdf and the cdf in the general case (i.e. fN(d) and FN(d), N≥2, respectively) is assisted by the hypersphere homogeneity, i.e. the fact that the hypersphere (and its chord length distribution) is invariant to axis rotation. Therefore, the hypersphere chord length distribution can be estimated assuming that one chord end is fixed to {0,0,0...0,R}, while the other end determines the chord length. An additional consequence of the rotation invariance is that fN(d) (FN(d)) is not only the asymptotic pdf (cdf) of dk but also the asymptotic pdf (cdf) of the distances d(i,j),j≠i from any fixed point in the point set pi, i.e. that when M tends to infinity each row (and column) of the distance matrix d(i,j) would follow fN(d) distribution.

-sphere with the hyperplane

The locus of the N-sphere points that have distance D, D≤d from a point on it is a hyperspherical cap of radius a=√d2−d44R2.

Due to Eq. (3), only FN(d) for d≤√2R (i.e. corresponding to hyperspherical caps less or equal than a hemi-hypersphere) is required. This part of the cdf is estimated using the surface AcapN(R) of a hyperspherical cap that is smaller than a hyper-hemisphere [20]:

In Eq. (4), N is the hypersphere dimension, R its radius, AN(R) the hypersphere surface, ϕ the colatitude angle [20] and I the regularised incomplete beta function [22] given by

The cumulative distribution function of the

The corresponding pdf fN(d) is:

The probability density function of the

Table I summarises the chord length distributions of hyperspheres of dimension 2 to 6, while the probability density functions and cumulative distribution functions for N=2,3,4,8,16,32 are shown in Figs. 2 and 3, respectively.

The moments about the origin

E(Dk) are estimated by using the transform d2/4R2=u, which leads to the following equation:

Hence, for the mean, μ the following holds:

On the other hand, E(D2) can be proven to be independent from the hypersphere dimension N. Indeed, Eq. (8) for k=2 becomes:

and substituting z=N2 in Eq. (10) it follows that E(D2)=2R2. If a point distribution in space is considered as a ”spatial stochastic signal”, then E(D2) would correspond to the signal power. The independence of E(D2) from the hypersphere dimension signifies that the ”power” of the uniform distribution on a hypersphere is constant in all hyperspheres of equal radius, independently of their dimension.

The variance σ2 is straightforwardly estimated by E(D) and E(D2):

Apart from E(D2), independent from the dimension is also the median score. By substituting d=√2R to 3 it follows that FN(√2R)=0.5,∀N≥2. √2R is the distance between a ”pole” and the ”equator”, thus this property is intuitively expected, since it follows by the fact that the two hyper-hemispheres have equal number of points.

Finally, a secondary contribution of the hypersphere distribution is that it allows to estimate the generic solution of the Bertrand problem [24], which refers to the probability PR of a random chord being larger than the radius R. By substituting d=R in Eq. (6) we get that:

However, the hyper-hemisphere is invariant to rotations around the pN axis, i.e. all points on the surface of the hyper-hemisphere with equal pN=c are produced by the rotation of the point C(0,0....,0,c′,c) (c′2+c2=R2,c′≥0) around pN axis. Since point distance is invariant to rotation, fNH(dp)=fNH(d′p) if pN=p′N, where dp and d′p is the distance from point p and p′, respectively and fNH(dp), fNH(d′p) are the respective chord length distributions. As a result, the probability that a hyper-hemispherical chord DH is smaller than d (d≤√2R) is:

Note that the hyperspherical cap of centre C, Acap(C,d), is a rotated version of a same-size hyperspherical cap having as a centre the pole J, Acap(J,d). The rotation is on the plane that is defined by the centre of the sphere O, the pole J and the chord end C, i.e. the plane defined by pN−1 and pN, and the rotation angle is the angle between OJ and OC, which in this case is ϕ.

As a matter of fact, XN(d,c) equals to 1 if the rotation angle is sufficiently small. To estimate the range of c for which XN(d,c)=1 it is reminded that the part of Acap(C,d) that lies within the hyper-hemisphere is the cut of the hypersphere with two hyperplanes, L:pN=0 and L′:c′RpN−1+cRpN=R(1−d22R2). The cap Acap(C,d) lies entirely within the hyper-hemisphere (i.e. XN(d,c)=1) if-f the hyperplane intersection happens outside the hypersphere. This implies that:

The determination of XN(d,c) in the case that XN(d,c)<1 (Fig. 4 is a rather challenging problem, which however can be linked to a single surface ratio:

where l1=sin−1(c/R) and l2=cos−1(1−d2/2R2). Estimating X′ through (Eq. 21) and replacing to (Eq. 19) gives the generic formula of hyper-hemisphere chord length distribution. This is a rather challenging task and leads to complex and lengthy expressions even for small values of N. As an example, the hyper-hemisphere chord length cdf for N=4 is given:

Analogous closed-form expressions of the hyper-hemisphere chord length distribution can be estimated using (Eq. 21) and (Eq. 19) if required.

The second and the third distribution allow the hypersphere chord length distribution to be used as an uniformity measure, as is described in the current section.

where, fN is the hypersphere chord length distribution. Note that this uniformity measure can be used to quantify the uniformity of all 3 types of point distance distributions that are described above.

The reason for selecting L1 is double; firstly, it satisfies the metric conditions, thus defining a metric space; secondly, it was experimentally found that L1(g) convergence rate to 0 for a uniform distribution is k−1/2, where k is the number of point-pairs that are included in the gN distribution (k=M, k=M(M−1)/2 and k=M−1, respectively, for the 3

examined types of point distance distributions). This allows the experimental computation of ”confidence intervals” for

L1(g) even when M takes an impractically large value. Initially, uniform pointsets of size M′ (M′≪M) are generated on the N-sphere and L1 values are sorted, before acquiring the α%-largest L1 value and finally extrapolating for pointsets of size M. This value is the threshold with which the input distance distribution L1(g) is compared to determine whether it is uniform or not.

Elaborating on this idea, based on the computational cost of iteratively estimating pairwise distances, L1 can be used to qualitatively assess whether an N-dimensional point sample S (consisting of M points, and having an intra-distribution g) originates from a uniform N-sphere (or N-hemisphere) distribution following on of the three following approaches:

Since L1(g)≡L can be straightforwardly estimated by the pointset S, and L1(gc)≤2 (this follows by the inequality |gN(x)−fN(x)|≤1,∀x), then a lower limit for Wc is L/2. Since Mc and M are infinite, then Wc=(Mc/M)2, i.e. Mc/M≥√L/2. The ratio Mc/M is the percentage of non-uniform points in S, therefore, what has been proven is the following: