Measurability Aspects of the Compactness Theorem for Sample Compression Schemes 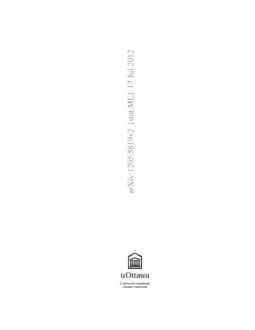 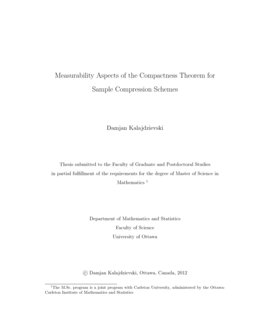 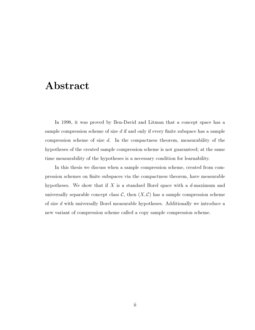 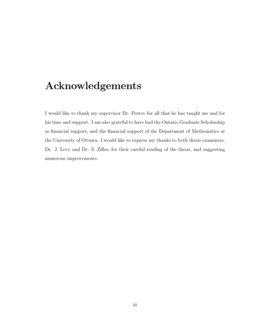 In particular if the value is infinite, we say VC(C)=∞.

The following are some elementary or well known examples of VC dimension which can be found in every text on statistical learning.

Let X be any infinite set and \CC=2X, Then clearly VC(X,\CC)=∞ because every (finite) A⊆X has \CC⊓A=2A and so A is shattered.

Let X be any totally ordered set with at least two elements, and let

Unless otherwise specified, from now on we will consider (X,C) to be our concept space, and d,k,m,n∈N.

[[vapnik:264]] The n’th shatter coefficients of \CC are defined to be

We can consider \CC as “function class"; a family of {0,1} valued functions on X: Let

where χC is the indicator function of C on X. Similarly, if F is a family of {0,1} valued functions on X we can get a concept class

Defining shattering for a function class F as: A⊆X is shattered by F if {f|A:f∈F}=2A. We can see that F shatters A iff \CCF shatters A, and \CC shatters A iff F\CC shatters A so the two notions are equivalent. In the future we will consider concepts as functions, but will still use set relations and operations on concepts, which will have the obvious meaning; for instance x∈C will be the same as C(x)=1, C⊆C′ the same as support(C)⊆ support(C′), C∩C′ the same as min{C,C′}, etc.

The following definitions are due to [welzl87rangespaces]. Let d∈N. A concept class \mC is d-maximum if for every A⊆X finite,

so A is not shattered.

As a consequence of Zorn’s Lemma every concept class of VC dimension d is contained in a d-maximal concept class.

hence by Sauer’s Lemma VC(\mC∪{A})>d, and therefore \CC is d-maximal.

We will show π is injective. Suppose there is C1≠C2 in C∖C′ such that

so without loss of generality x0∈C1∖C2. We get that

The dual concept space of a space represented as (X,\mC), can be thought of as

The above notions partially order any set of concept spaces; if there exists an embedding or generalized embedding from (X,Y,R) to (X′,Y′,R′), we will denote that

A concept space (X,Y,R) may have some redundant points in X×Y as far as R is concerned, but we can reduce it to its essential information by setting:

In the proof of the next proposition and throughout the further text we use the notation △ for symmetric difference of a set; i.e. V△W:=(V∖W)∪(W∖V)

Let A be a finite subset of X that is shattered, let

Sample compression schemes, introduced by Littlestone and Warmuth ([Littlestone86relatingdata]), are naturally arising algorithms which learn concepts by saving finite samples of concepts to subsets of size at most d.

The following notations will be used in the definitions of sample compression schemes, and throughout the text.

where A⊆X and C|A is the function C restricted to the domain A, and let

We can similarly define

be the notation for f extending g.

For d∈N, an unlabelled sample compression scheme of size d on (X,C) is a function

A labelled sample compression scheme of size d on (X,C) is a function

We will call the range of a sample compression scheme the hypothesis class and denote it by H.

Let X be any totally ordered set, and let C={Ix:x∈X} be the set of all initial segments of X. Defining

Therefore H′ is also a sample compression scheme of size 1 on (X,\CC).

From now on we will only be dealing with unlabelled sample compression schemes unless otherwise mentioned.