Mean survival by ordered fractions of population with censored data

We propose a novel approach for estimating mean survival time in the presence of censored data, in which we divide the population under study into survival-ordered fractions defined by a set of proportions, and compute the mean survival time for each fraction separately. Our approach provides a detailed picture of the distribution of the time variable while preserving the appealing interpretation of the mean. Our measure proves to be of great use in applications, particularly those where we are able to detect differences in mean survival across groups for certain fractions of the population that would have been overlooked using other available methods. 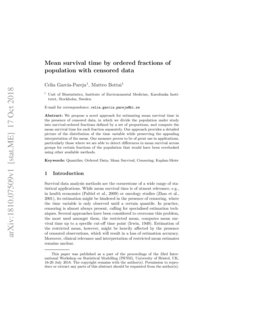 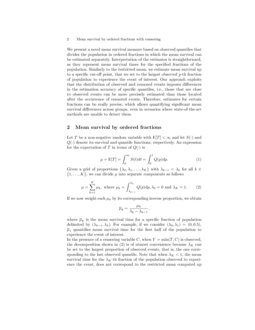 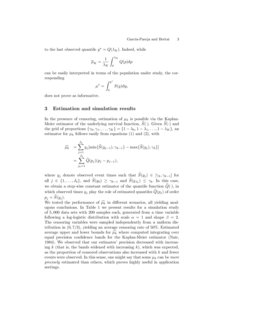 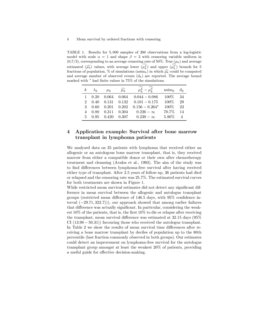 Survival data analysis methods are the cornerstone of a wide range of statistical applications. While mean survival time is of utmost relevance, e.g., in health economics (Paltiel et al., 2009) or oncology studies (Zhao et al., 2001), its estimation might be hindered in the presence of censoring, where the time variable is only observed until a certain quantile. In practice, censoring is almost always present, calling for specialised estimation techniques. Several approaches have been considered to overcome this problem, the most used amongst them, the restricted mean, computes mean survival time up to a specific cut-off time point (Irwin, 1949). Estimation of the restricted mean, however, might be heavily affected by the presence of censored observations, which will result in a loss of estimation accuracy. Moreover, clinical relevance and interpretation of restricted mean estimates remains unclear.

We present a novel mean survival measure based on observed quantiles that divides the population in ordered fractions in which the mean survival can be estimated separately. Interpretation of the estimates is straightforward, as they represent mean survival times for the specified fractions of the population. Similarly to the restricted mean, we estimate mean survival up to a specific cut-off point, that we set to the largest observed p-th fraction of population to experience the event of interest. Our approach exploits that the distribution of observed and censored events imposes differences in the estimation accuracy of specific quantiles, i.e., those that are close to observed events can be more precisely estimated than those located after the occurrence of censored events. Therefore, estimates for certain fractions can be really precise, which allows quantifying significant mean survival differences across groups, even in scenarios where state-of-the-art methods are unable to detect them.

be a non-negative random variable with

E[T]<∞ and let S(⋅) and Q(⋅) denote its survival and quantile functions, respectively. An expression for the expectation of T in terms of Q(⋅) is

If we now weight each μk by its corresponding inverse proportion, we obtain

In the presence of a censoring variable C, when Y=min(T,C) is observed, the decomposition shown in (2) is of utmost convenience because λK can be set to the largest proportion of observed events, that is, the one corresponding to the last observed quantile. Note that when λK<1, the mean survival time for the λK-th fraction of the population observed to experience the event, does not correspond to the restricted mean computed up to the last observed quantile y⋆=Q(λK). Indeed, while

can be easily interpreted in terms of the population under study, the corresponding

does not prove as informative.

In the presence of censoring, estimation of μk is possible via the Kaplan-Meier estimator of the underlying survival function, ˆS(⋅). Given ˆS(⋅) and the grid of proportions {γ0,γ1,…,γK}={1−λ0,1−λ1,…,1−λK}, an estimator for μk follows easily from equations (1) and (2), with

where yj denote observed event times such that ˆS(yj)∈[γk,γk−1] for all j∈{1,…,Jk}, and ˆS(y0)≥γk−1 and ˆS(yJk)≤γk. In this case, we obtain a step-wise constant estimator of the quantile function ˆQ(⋅), in which observed times yj play the role of estimated quantiles ˆQ(pj) of order pj=ˆS(yj).

We tested the performance of ˆμk in different scenarios, all yielding analogous conclusions. In Table 1 we present results for a simulation study of 5,000 data sets with 200 samples each, generated from a time variable following a log-logistic distribution with scale α=1 and shape β=2

. The censoring variables were sampled independently from a uniform distribution in

(0,7/3), yielding an average censoring rate of 50%. Estimated average upper and lower bounds for ˆμk where computed integrating over equal precision confidence bands for the Kaplan-Meier estimator (Nair, 1984). We observed that our estimates’ precision decreased with increasing k (that is, the bands widened with increasing k), which was expected, as the proportion of censored observations also increased with k and fewer events were observed. In this sense, one might say that some μk can be more precisely estimated than others, which proves highly useful in application seetings.

We analysed data on 35 patients with lymphoma that received either an allogenic or an autologous bone marrow transplant, that is, they received marrow from either a compatible donor or their own after chemotherapy treatment and cleansing (Avalos et al., 1993). The aim of the study was to find differences between lymphoma-free survival after having received either type of transplant. After 2.5 years of follow-up, 26 patients had died or relapsed and the censoring rate was 25.7%. The estimated survival curves for both treatments are shown in Figure 1.

Our estimates could detect an improvement on lymphoma-free survival for the autologus transplant group amongst at least the weakest 20% of patients, providing a useful guide for effective decision-making.

Our approach for quantifying mean survival time takes advantage of the information contained in the data and deals with the censoring hurdle. Our proposed measures are easily interpretable, providing a useful alternative to the restricted mean, which poses interpretation difficulties. By dividing the study population into ordered fractions, the proposed method provides a detailed picture of the underlying probability distribution and can detect mean survival differences across groups that are often undetected by other methods. Results from a simulation study show good performance of our proposed estimation strategy even in the presence of censoring, and support the idea that mean survival can be more accurately estimated in some fractions of the population. In the analysis of survival data after bone marrow transplant, our method detected differences in mean survival between given transplants for certain fractions of population, while those differences were overlooked when using restricted mean estimates instead.