Machine learning has revolutionized fields such as image, text, and speech recognition. There's also growing interest in applying machine and deep learning methods in science, engineering, medicine, and finance. Despite their immense success in practice, there is limited mathematical understanding of neural networks. We mathematically study neural networks in the asymptotic regime of simultaneously (A) large network sizes and (B) large numbers of stochastic gradient descent training iterations. We rigorously prove that the neural network satisfies a central limit theorem. Our result describes the neural network's fluctuations around its mean-field limit. The fluctuations have a Gaussian distribution and satisfy a stochastic partial differential equation. 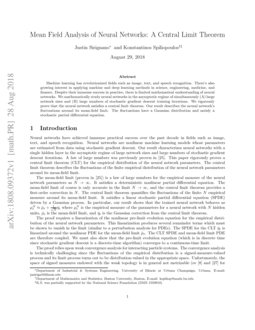 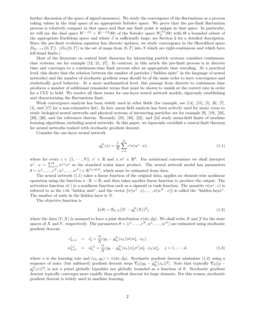 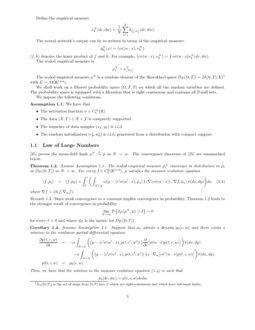 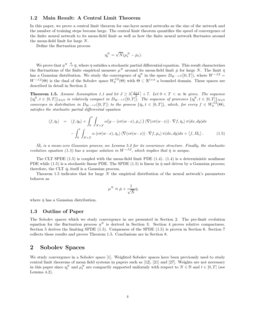 Neural network models have been used as computational tools in many different contexts including machine learning, pattern recognition, physics, neuroscience and statistical mechanics, see for example

. Neural network models, particularly in machine learning, have achieved immense practical success over the past decade in fields such as image, text, and speech recognition. We mathematically analyze neural networks with a single hidden layer in the asymptotic regime of large network sizes and large numbers of stochastic gradient descent iterations. A law of large numbers was previously proven in

The proof requires a linearization of the nonlinear pre-limit evolution equation for the empirical distribution of the neural network parameters. This linearization produces several remainder terms which must be shown to vanish in the limit (similar to a perturbation analysis for PDEs). The SPDE for the CLT ¯ηt is linearized around the nonlinear PDE for the mean-field limit ¯μt. The CLT SPDE and mean-field limit PDE are therefore coupled. We must also show that the pre-limit evolution equation (which is in discrete time since stochastic gradient descent is a discrete-time algorithm) converges to a continuous-time limit.

The proof relies upon weak convergence analysis for interacting particle systems. The convergence analysis is technically challenging since the fluctuations of the empirical distribution is a signed-measure-valued process and its limit process turns out to be distribution-valued in the appropriate space. Unfortunately, the space of signed measures endowed with the weak topology is in general not metrizable (see [11] and [32] for further discussion of the space of signed measures). We study the convergence of the fluctuations as a process taking values in the dual space of an appropriate Sobolev space. We prove that the pre-limit fluctuation process is relatively compact in that space and that any limit point is unique in that space. In particular, we will use the dual space W−J,2=W−J,2(Θ) of the Sobolev space WJ,20(Θ) with Θ a bounded subset of the appropriate Euclidean space and where J is sufficiently large; see Section 2 for a detailed description. Since the pre-limit evolution equation has discrete updates, we study convergence in the Skorokhod space DW−J,2([0,T]). (DS([0,T]) is the set of maps from [0,T] into S which are right-continuous and which have left-hand limits.)

Most of the literature on central limit theorems for interacting particle systems considers continuous-time systems, see for example [15, 26, 32, 5, 10, 6]. In contrast, in this article the pre-limit process is in discrete time and converges to a continuous-time limit process after an appropriate time rescaling. At a practical level, this shows that the relation between the number of particles (“hidden units” in the language of neural networks) and the number of stochastic gradient steps should be of the same order to have convergence and statistically good behavior. At a more mathematical level, this passage from discrete to continuous time produces a number of additional remainder terms that must be shown to vanish at the correct rate in order for a CLT to hold. We resolve all these issues for one-layer neural network models, rigorously establishing and characterizing the fluctuations limit.

Weak convergence and mean field analysis has been used in many other disciplines, including interacting particle systems in physics, neural networks in biology and financial modeling, see for example [17], [18], [7], [8], [9], [4], [20], [12], [23], [28], [34], [31] and the references therein for a certainly not-complete list. Recently, [30], [35], [27], and [29] study mean-field limits of machine learning algorithms, including neural networks. In this paper, we rigorously establish a central limit theorem for neural networks trained with stochastic gradient descent. [29] also formally studies corrections to the mean field limit.

where for every i∈{1,⋯,N}, ci∈R and x,wi∈Rd. For notational convenience we shall interpret wi⋅x=∑dj=1wi,jxj as the standard scalar inner product. The neural network model has parameters θ=(c1,…,cN,w1,…,wN)∈R(1+d)N

, which must be estimated from data.

The neural network (1.1) takes a linear function of the original data, applies an element-wise nonlinear operation using the function σ:R→R

, and then takes another linear function to produce the output. The activation function

σ(⋅) is a nonlinear function such as a sigmoid or tanh function. The quantity σ(wi⋅x) is referred to as the i

-th “hidden unit”, and the vector

The objective function is

where the data (Y,X)

is assumed to have a joint distribution

π(dx,dy). We shall write X⊂Rd and Y⊂R for the state spaces of X and Y, respectively. The parameters θ=(c1,…,cN,w1,…,wN) are estimated using stochastic gradient descent:

The neural network’s output can be re-written in terms of the empirical measure:

⟨f,h⟩ denotes the inner product of f and h. For example, ⟨cσ(w⋅x),νNk⟩=∫cσ(w⋅x)νNk(dc,dw).

The scaled empirical measure is

The scaled empirical measure μN is a random element of the Skorokhod space DE([0,T])333DS([0,T]) is the set of maps from [0,T] into S which are right-continuous and which have left-hand limits. with E=M(R1+d).

We shall work on a filtered probability space

on which all the random variables are defined. The probability space is equipped with a filtration that is right continuous and contains all

We impose the following conditions.

[30] proves the mean-field limit μNp→¯μ as N→∞. The convergence theorems of [30] are summarized below.

Assume Assumption 1.1. The scaled empirical measure μNt converges in distribution to ¯μt in DE([0,T]) as N→∞. For every f∈C2b(R1+d), ¯μ is the deterministic unique solution of the measure evolution equation

Assume Assumption 1.1. Suppose that ¯μ0 admits a density p0(c,w) and that there exists a unique solution to the nonlinear partial differential equation

Then, we have that the solution to the measure evolution equation (1.4) is such that

We prove that ηNd→¯η, where ¯η satisfies a stochastic partial differential equation. This result characterizes the fluctuations of the finite empirical measure μN around its mean-field limit ¯μ for large N. The limit ¯η has a Gaussian distribution. We study the convergence of ηNt in the space DW−J,2([0,T]), where W−J,2=W−J,2(Θ) is the dual of the Sobolev space WJ,20(Θ) with Θ⊂R1+d a bounded domain. These spaces are described in detail in Section 2.

¯Mt is a mean-zero Gaussian process; see Lemma 5.2 for its covariance structure. Finally, the stochastic evolution equation (1.5) has a unique solution in W−J,2, which implies that ¯η is unique.

Theorem 1.5 indicates that for large N the empirical distribution of the neural network’s parameters behaves as

where ¯η has a Gaussian distribution. Combined, Theorems 1.2 and 1.5

show that the relation between the number of particles (”hidden units” in the language of neural networks) and the number of stochastic gradient steps should be of the same order to have convergence and statistically good behavior. Under this scaling, as a measure valued process, the empirical distribution of the parameters behaves as a Gaussian distribution with specific variance-covariance structure (as indicated by Theorem

In Section 2 we present the Sobolev spaces with respect to which convergence is studied. The pre-limit evolution equation for the fluctuation process ηN is derived in Section 3. Section 4 proves relative compactness. Section 5 derives the limiting SPDE (1.5). Uniqueness of the SPDE (1.5) is proven in Section 6. Section 7 collects these results and proves Theorem 1.5. Conclusions are in Section 8.

We study convergence in a Sobolev space [1]. Weighted Sobolev spaces have been previously used to study central limit theorems of mean field systems in papers such as [15], [26] and [32]. Weights are not necessary in this paper since ηNt and μNt are compactly supported uniformly with respect to N∈N and t∈[0,T] (see Lemma 4.3).

Let Θ⊂RD be a bounded domain with D=d+1. For any integer J∈N, consider the space of real valued functions f with partial derivatives up to order J which satisfy

We will study convergence in the Sobolev space corresponding to J≥3⌈D2⌉+7. From Lemma 4.3, we have that μNt and ηNt are compactly supported. In particular, there exists a compact set K=[−Co,Co]D⊂RD such that μNt and ηNt vanish outside the compact set K for every N∈N and t∈[0,T]. We choose Θ=(−B,B)D where B=3√DCo. Note that Co, and thus the domain Θ, may depend upon fixed parameters of the problem such that T, α, π(dx,dy), and ¯μ0, but what is important is that the bounded set Θ is fixed and does not change with N∈N or t∈[0,T].

The goal of this section is to write ⟨f,ηNt⟩, with ηNt being the fluctuation process and f∈C2b(R1+d) a test function, in a way that allows us to take limits. In particular, our goal is to describe the evolution of ⟨f,ηNt⟩ in terms of the equation (3.5). In order to do this, we need some preliminary computations.

We consider the evolution of the empirical measure νNk via test functions f∈C2b(R1+d). A Taylor expansion yields

for points ¯cik,¯wik in the segments connecting cik+1 with cik and wik+1 with wik, respectively. Under the compactness part of Assumption 1.1, the results of [30] imply that the parameters are uniformly bounded (in both 0≤k≤NT and N):

We next define the following components:

As it will be demonstrated in Section 4.2, ⟨f,M1,N(t)⟩ and ⟨f,M2,N(t)⟩ are martingale terms. We also define

where V1,Nt is a remainder term defined below. Similarly,

VNt is a cádlág process with jumps at times 1N,2N,…,⌊NT⌋N. Furthermore, due to the uniform bound (3.2) and X×Y being a compact set, VNt is an O(N−1) remainder term:

The scaled empirical measure can be written as the telescoping sum

Note that 1N2⌊Nt⌋−1∑k=0GNk is O(N−1). Define the fluctuation process

The main result of this section is Lemma 4.1 below and it provides a uniform bound with respect to N∈N and t∈[0,T]</s