We analyze multi-layer neural networks in the asymptotic regime of simultaneously (A) large network sizes and (B) large numbers of stochastic gradient descent training iterations. We rigorously establish the limiting behavior of the multilayer neural network output. The limit procedure is valid for any number of hidden layers and it naturally also describes the limiting behavior of the training loss. The ideas that we explore are to (a) sequentially take the limits of each hidden layer and (b) characterizing the evolution of parameters in terms of their initialization. The limit satisfies a system of integro-differential equations. 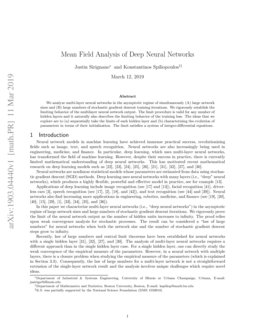 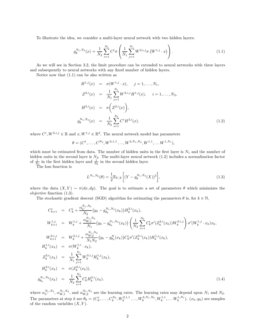 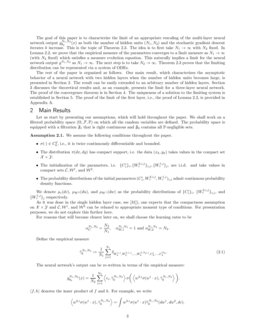 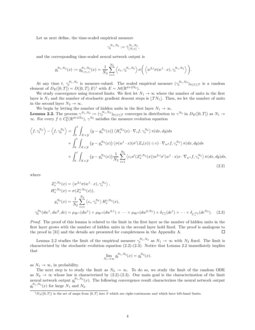 On the geometry of generalization and memorization in deep neural networks

Deep learning has achieved immense practical success, revolutionizing fields such as image, text, and speech recognition. It is also increasingly being used in engineering, medicine, and finance. However, despite their success in practice, there is currently limited mathematical understanding of deep neural networks. This has motivated recent mathematical research on deep learning models such as [26], [27], [28], [29], [30], [25], [36], [37], [32], and [35].

Applications of deep learning include image recognition (see [21] and [15]

Recently, law of large numbers and central limit theorems have been established for neural networks with a single hidden layer

[36], [37], [32], and [35]. For a single hidden layer, one can directly study the weak convergence of the empirical measure of the parameters. However, in a neural network with multiple layers, there is a closure problem when studying the empirical measure of the parameters (which is explained in Section 3.3). Consequently, the law of large numbers for a multi-layer network is not a straightforward extension of the single-layer network result and the analysis involves unique challenges which require new approaches. In this paper we establish the limiting behavior of the output of the neural network.

To illustrate the idea, we consider a multi-layer neural network with two hidden layers:

Notice now that (1.1) can be also written as

where Ci,W2,i,j∈R and x,W1,j∈Rd. The neural network model has parameters

The loss function is

where the data (X,Y)∼π(dx,dy). The goal is to estimate a set of parameters θ which minimizes the objective function (1.3).

The stochastic gradient descent (SGD) algorithm for estimating the parameters θ is, for k∈N,

are samples of the random variables

The goal of this paper is to characterize the limit of an appropriate rescaling of the multi-layer neural network output gN1,N2θk(x) as both the number of hidden units (N1,N2) and the stochastic gradient descent iterates k become large. This is the topic of Theorem 2.3. The idea is to first take N1→∞ with N2 fixed. In Lemma 2.2, we prove that the empirical measure of the parameters converges to a limit measure as N1→∞ (with N2 fixed) which satisfies a measure evolution equation. This naturally implies a limit for the neural network output gN1,N2 as N1→∞. The next step is to take N2→∞. Theorem 2.3 proves that the limiting distribution can be represented via a system of ODEs.

The rest of the paper is organized as follows. Our main result, which characterizes the asymptotic behavior of a neural network with two hidden layers when the number of hidden units becomes large, is presented in Section 2. The result can be easily extended to an arbitrary number of hidden layers. Section 3 discusses the theoretical results, includes a numerical study to showcase some of the theoretical implications, and, as an example, presents the limit for a three-layer neural network. The proof of the convergence theorem is in Section 4. The uniqueness of a solution to the limiting system is established in Section 5. The proof of the limit of the first layer (i.e., the proof of Lemma 2.2) is provided in Appendix A.

Let us start by presenting our assumptions, which will hold throughout the paper. We shall work on a filtered probability space

(Ω,F,P) on which all the random variables are defined. The probability space is equipped with a filtration Ft that is right continuous and F0 contains all P-negligible sets.

We assume the following conditions throughout the paper.

For reasons that will become clearer later on, we shall choose the learning rates to be

Note that the weights in the second layer are trained faster than the other parameters. This choice of learning rates is necessary for convergence to a non-trivial limit as N1,N2→∞. If the parameters in all the layers are trained with the same learning rate, it can be mathematically shown that the network will not train as N1,N2 become large. We further explore this interesting fact in Section 3.1.

The neural network’s output can be re-written in terms of the empirical measure:

⟨f,h⟩ denotes the inner product of f and h. For example, we write

Let us next define the time-scaled empirical measure

and the corresponding time-scaled neural network output is

We begin by letting the number of hidden units in the first layer N1→∞.

The process γN1,N2\vcentcolon=(γN1,N2t)0≤t≤T converges in distribution to the measure valued process γN2 that takes values in DE([0,T]) as N1→∞. For every f∈C2b(Rd+2N2), γN2 satisfies the measure evolution equation

Lemma 2.2 studies the limit of the empirical measure γN1,N2t as N1→∞ with N2 fixed. The limit is characterized by the stochastic evolution equation (2.3)-(2.4). Notice that Lemma 2.2 immediately implies that

The system in (2.5) has a unique solution. In addition, letting gN2t(x) defined through Lemma 2.2 we have the following rate of convergence

for some constant K<∞.

Notice that we can also write that gt(x) satisfies

The proof of Theorem 2.3 is given in Section 4. Section 3 discusses some of its consequences as well as challenges that come up in the study of the limiting behavior of multi-layer neural networks as the number of the hidden units grows.

In Subsection 3.1, we discuss some of the implications of our theoretical convergence results and presents related numerical results. In Section 3.2, we show that the procedure can be extended to treat deep neural networks with more than two hidden layers. General challenges in the study of multi-layer neural networks are explored Subsection 3.3.

3.1 Discussion on the limiting results

with the corresponding empirical measure of the parameters becoming

In that case notice that we can simply write

Then, it is relatively straightforward to notice that the result of Lemma 2.2 boils down to the one layer convergence results of [36], see also [32, 35]. Namely, if we write γt for the limit in probability of γNt we get that

Perhaps more interestingly, the law of large numbers for a single hidden-layer network indicates that the network will converge to a deterministic limit in probability. That is, after a certain point, adding more hidden units will not increase the accuracy. In order for the trained network to change, more layers must be added to the network. This matches the behavior of neural networks in practice, where we see that deep neural networks (more layers) outperform shallow neural networks (only a few layers).

In addition, Theorem 2.3 gives us the limiting behavior of the objective function LN1,N2(θ) from (1.3) after proper rescaling. Indeed, we have that

Theorem 2.3 shows that under an appropriate choice of the learning rates there is a well-defined limit for the neural network output and, as a consequence, for the objective function as well.

The parametrization of the learning rates, see (2.1), indicates that one should be using larger learning rates for the weights that connect the different layers, the W2,i,j in this case, as opposed to the weights that are specific to the different layers, in this case Ci and W1,j. Notice that this is also the case for the three layer case outlined in Subsection 3.2 below.

where Nℓ is the number of hidden units in the ℓ-th layer.

If the learning rates are constant in the number of hidden units N1,…,NL, it turns out that the network will not train as N1,…,NL→∞ (i.e., in the limit, the network parameters will remain at their initial conditions).

The necessity of scaling the learning rates in the asymptotic regime of large numbers of hidden units (i.e., wide layers) is one of the interesting products of the mean-field limit analysis. A numerical example is presented in Figure 1

below. A deep neural network is trained to classify images for the CIFAR10 dataset

[31]. The CIFAR10 dataset contains 60,000 color images in 10 classes (airplane, automobile, bird, cat, deer, dog, frog, horse, ship, and truck). The dataset is divided into 50,000 training images and 10,000 test images. Each image has 32×32×3 pixels. The goal is to train a neural network to correctly classify each image based solely on the image pixels as an input. The neural network we use has the mean-field normalizations 1Nℓ in each layer ℓ. There are 8 convolution layers which each have 64 channels. This is followed by two fully-connected layers which each have 500 units. We first train the neural network using the scaled learning rates. Then, we also train the neural network with the standard stochastic gradient descent algorithm (no scaling of the learning rates). Using the scaled learning rates, we achieve a high test accuracy. However, without the scalings, the neural network does not train (i.e., it remains at a very low accuracy).

which can be also written as

where Ci,W2,j,ν,W3,i,j∈R and x,W1,ν∈Rd. The neural network model has parameters

(xk,yk) are samples of the random variables (X,Y). We assume a condition analogous to Assumption 2.1.

Let us now choose the learning rates to be

Similar to before, define the empirical measure

The time-scaled empirical measure is