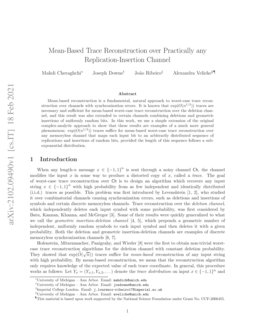 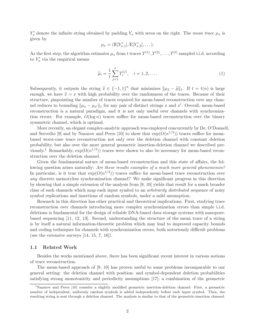 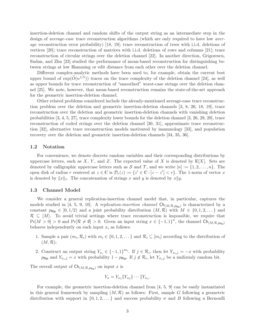 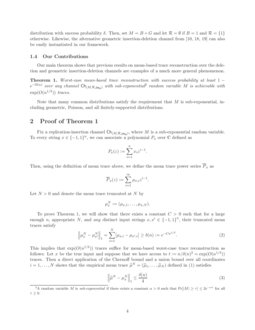 When any length-n message is sent through a noisy channel Ch, the channel modifies the input x in some way to produce a distorted copy of x, called a trace. The goal of worst-case trace reconstruction over Ch is to design an algorithm which recovers any input string

with high probability from as few independent and identically distributed (i.i.d.) traces as possible. This problem was first introduced by Levenshtein

[1, 2], who studied it over combinatorial channels causing synchronization errors, such as deletions and insertions of symbols and certain discrete memoryless channels. Trace reconstruction over the deletion channel, which independently deletes each input symbol with some probability, was first considered by Batu, Kannan, Khanna, and McGregor [3]. Some of their results were quickly generalized to what we call the geometric insertion-deletion channel [4, 5], which prepends a geometric number of independent, uniformly random symbols to each input symbol and then deletes it with a given probability. Both the deletion and geometric insertion-deletion channels are examples of discrete memoryless synchronization channels [6, 7].

Yx with zeros on the right. The mean trace μx is given by

As the first step, the algorithm estimates

Given the fundamental nature of mean-based reconstruction and this state of affairs, the following question arises naturally: Are these results examples of a much more general phenomenon? In particular, is it true that exp(O(n1/3)) traces suffice for mean-based trace reconstruction over any discrete memoryless synchronization channel? We make significant progress in this direction by showing that a simple extension of the analysis from [9, 10] yields that result for a much broader class of such channels which map each input symbol to an arbitrarily distributed sequence of noisy symbol replications and insertions of random symbols, under a mild assumption.

Research in this direction has other practical and theoretical implications. First, studying trace reconstruction over channels introducing more complex synchronization errors than simple i.i.d. deletions is fundamental for the design of reliable DNA-based data storage systems with nanopore-based sequencing [11, 12, 13]. Second, understanding the structure of the mean trace of a string is by itself a natural information-theoretic problem which may lead to improved capacity bounds and coding techniques for channels with synchronization errors, both notoriously difficult problems (see the extensive surveys [14, 15, 7, 16]).

Besides the works mentioned above, there has been significant recent interest in various notions of trace reconstruction.

For convenience, we denote discrete random variables and their corresponding distributions by uppercase letters, such as

and a joint probability distribution

(M,R) with M∈{0,1,2,…} and R⊆[M]. To avoid trivial settings where trace reconstruction is impossible, we require that Pr[M>0]>0 and Pr[R≠∅]>0. Given an input string , the channel Ch(M,R,pflip) behaves independently on each input xi as follows:

The overall output of Ch(M,R,pflip) on input x is

For example, the geometric insertion-deletion channel from [4, 5, 9] can be easily instantiated in this general framework by sampling (M,R) as follows: First, sample G

following a geometric distribution with support in

δ. Then, set M=B+G and let R=∅ if B=1 and R={1} otherwise. Likewise, the alternative geometric insertion-deletion channel from [10, 18, 19] can also be easily instantiated in our framework.

Our main theorem shows that previous results on mean-based trace reconstruction over the deletion and geometric insertion-deletion channels are examples of a much more general phenomenon.

Note that many common distributions satisfy the requirement that M is sub-exponential, including geometric, Poisson, and all finitely-supported distributions.

Fix a replication-insertion channel Ch(M,R,pflip), where M is a sub-exponential random variable. To every string x∈{−1,1}n, we can associate a polynomial Px over C defined as

Then, using the definition of mean trace above, we define the mean trace power series ¯¯¯¯Px as

To prove Theorem 1, we will show that there exists a constant C>0 such that for a large enough n, appropriate N, and any distinct input strings , their truncated mean traces satisfy

This implies that exp(O(n1/3)) traces suffice for mean-based worst-case trace reconstruction as follows: Let x be the true input and suppose that we have access to t:=n/δ(n)2=exp(O(n1/3)) traces. Then a direct application of the Chernoff bound and a union bound over all coordinates i=1,…,N shows that the empirical mean trace ˆμN=(ˆμ1,…,ˆμN) defined in (1) satisfies

with probability at least 1−e−Ω(n) over the randomness of the traces. On the other hand, if (3) holds, we also have that

for all x′≠x as a result of (2). This allows us to recover x naively from ˆμ by computing μNˆx for every and outputting the ˆx that minimizes \normˆμN−μNˆx.

for every z∈C such that |z|≥1. Rearranging, it follows that is lower-bounded by

for any such z. The lower bound in (2), and thus Theorem 1, follows by combining (4) with the next two lemmas, each bounding a different term in the right-hand side of (4).

for all distinct when n is large enough.

Invoking Lemmas 2 and 3, we have that for n large enough and any distinct , there exists an appropriate choice z⋆∈C possibly depending on x and x′ which satisfies 1≤|z⋆|≤ec2n−2/3 and by setting z=z⋆ and N=c4n in (4) yields

We prove Lemmas 2 and 3 in Sections 3 and 4, respectively, which completes the argument.

Our proof of Lemma 2 follows the blueprint of [9, Sections 4 and 5] and [10, Sections 2 and 3]. The key differences lie in Lemmas 4 and 6 below. Lemma 4 generalizes [9, Section 4 and Appendix A.3] and [10, Lemmas 2.1 and 5.2] to arbitrary replication-insertion channels well beyond the deletion and geometric insertion-deletion channels. Lemma 6 requires analyzing the local behavior of the inverse of an arbitrary probability generating function (PGF) in the complex plane around z=1. Remarkably, the desired behavior follows by combining the standard inverse function theorem for analytic functions with basic properties of PGFs. In contrast, the PGFs associated to the deletion and geometric insertion-deletion channels treated in [9, 10, 18, 19] are all Möbius transformations, meaning that their inverses have simple explicit expressions and could be easily analyzed directly.

As a first step, we show that the mean trace power series ¯¯¯¯Px is related to the input polynomial Px through a change of variable. This allows us to bound \abs¯¯¯¯Px(z)−¯¯¯¯Px′(z) in terms of \absPx(w)−Px′(w) for some w related to z.

Let Ch(M,R,pflip) be a replication-insertion channel. Suppose is finite. Let W be the distribution given by

and gM and gW be the probability generating functions of M and W, respectively. Then for every x∈{−1,1}n and z∈C such that z is in the disk of convergence of both gM and gW, we have .

We can use (6) to lower bound (5), provided there exists zL such that gM(zL)=wL with good properties. The following lemma ensures this.

for some constant C3>0 when n is large enough. This concludes the proof of Lemma 2 assuming Lemmas 4 and 6.

In this section, we prove the remaining lemmas.

are uniformly distributed over

{−1,1}, the Bi,j are random variables over that are −1 with probability pflip, and all these are independent of each other, Ri, and Ii. Note that if an output bit is in Ri, then it has expected value (1−2pflip)xi. Therefore, we have that

We can use this to show that

We proceed to simplify ∑∞j=1Pr[j∈Ri]⋅zj−1. Let M(ℓ):=∑ℓk=1Mk, where the Mk:=|Yxk| denote the lengths of the channel outputs associated to each input bit xk and are i.i.d. according to M. We have

We can interchange the sums above because z is in the disk of convergence of gM and gW. From the definition of W,

Because M is sub-exponential and non-trivial, gM is a non-constant analytic function on some open ball Dr(0) of radius r>1 that satisfies g′M(1)=E[M]≠0. Hence, Lemma 7 applies with g=gM, so there exist ρ,δ>0 and an analytic function f:Dδ(1)→Dρ(1) such that gM(f(w))=w. In particular, there exists γ∈(0,δ) such that for every w∈Dγ(1) we can write

Assume that L is large enough so that eiφ∈Dγ(1) for all . Then, we set zφ=f(eiφ). Note that gM(zφ)=eiφ by the definition of f, as required.

Combining (11) with w=eiφ and the triangle inequality, we have

by the chain rule, we obtain

To conclude the argument, we prove Lemma 3 using an argument analogous to [9, Appendix A.2] and the fact that M is sub-exponential.

for every i. Since M is sub-exponential, a direct application of Bernstein’s inequality [39, Theorem 2.8.1] guarantees the existence of constants c4,c6>0 such that for N=c4n and any j≥1 we have

for some constant c5>0 and n large enough.

We have shown that exp(O(n1/3)) traces suffice for mean-based worst-case trace reconstruction over a broad class of replication-insertion channels. However, our channel model does not cover all discrete memoryless synchronization channels as defined by Dobrushin [6, 7]. It would be interesting to extend the result in some form to all such non-trivial channels. On the other hand, to complement the above, it would be interesting to prove trace complexity lower bounds for mean-based reconstruction over all these channels.

Furthermore, it is unclear whether the assumption that M is sub-exponential is necessary for our result. A clear extension of this work would be to either remove this condition or prove that it is necessary for mean-based trace reconstruction from exp(O(n1/3)) traces.