In this work we present a new State-of-The-Art on the text-to-video retrieval task on MSR-VTT, LSMDC, MSVD, YouCook2 and TGIF obtained by a single model. Three different data sources are combined: weakly-supervised videos, crowd-labeled text-image pairs and text-video pairs. A careful analysis of available pre-trained networks helps to choose the best prior-knowledge ones. We introduce three-stage training procedure that provides high transfer knowledge efficiency and allows to use noisy datasets during training without prior knowledge degradation. Additionally, double positional encoding is used for better fusion of different modalities and a simple method for non-square inputs processing is suggested. 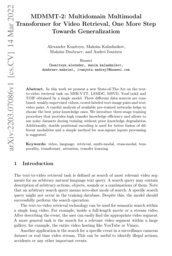 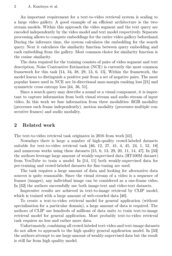 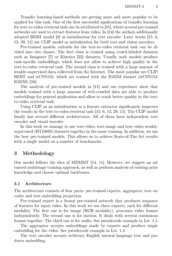 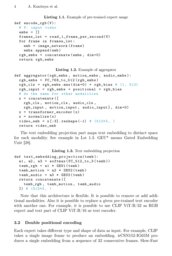 We present a new state-of-the-art on the text to video retrieval task on...
Maksim Dzabraev, et al. ∙

Learning a Text-Video Embedding from Incomplete and Heterogeneous Data

CLIP4Clip: An Empirical Study of CLIP for End to End Video Clip Retrieval

Show Me What and Tell Me How: Video Synthesis via Multimodal Conditioning

The text-to-video retrieval task is defined as search of most relevant video segments for an arbitrary natural language text query. A search query may contain description of arbitrary actions, objects, sounds or a combinations of them. Note that an arbitrary search query means zero-shot mode of search. A specific search query might not occur in the training database. Despite this, the model should successfully perform the search operation.

The text-to-video retrieval technology can be used for semantic search within a single long video. For example, inside a full-length movie or a stream video. After describing the event, the user can easily find the appropriate video segment. A more general task is the search for a relevant video segment within a large gallery, for example, the entire video hosting like YouTube or Vimeo.

Another application is the search for a specific event in a surveillance cameras dataset or real time video stream. This can be useful to identify illegal actions, accidents or any other important events.

An important requirement for a text-to-video retrieval system is scaling to a large video gallery. A good example of an efficient architecture is the two-stream models. Within this approach the video segment and the text query are encoded independently by the video model and text model respectively. Separate processing allows to compute embeddings for the entire video gallery beforehand. During the inference time, the system calculates the embedding for the search query. Next it calculates the similarity function between query embedding and each embedding from the gallery. Most common choice for similarity function is the cosine similarity.

The data required for the training consists of pairs of video segment and text description. Noise Contrastive Estimation (NCE) is currently the most common framework for this task

The text-to-video retrieval task originates in 2016 from work [rohrbach2016movie].

The task requires a large amount of data and looking for alternative data sources is quite reasonable. Since the visual stream of a video is a sequence of frames (images), any individual image can be considered as a one-frame video. In [miech2020learning] the authors successfully use both image-text and video-text datasets.

Impressive results are achieved in text-to-image retrieval by CLIP model, which is trained with a large amount of web-crawled data

Unfortunately, combining all crowd-labeled text-video and text-image datasets do not allow to approach to the high quality general application model. In [miech2020endtoend] the authors attempt to use large amount of weakly-supervised data but the result is still far from high quality model.

Transfer learning-based methods are getting more and more popular to be applied for this task. One of the first successful applications of transfer learning for text-to-video retrieval task can be attributed to [miech2018learning], where several pre-trained networks are used to extract features from video. In [gabeur2020multimodal] the authors additionally adopted BERT model [bert] as initialization for text encoder. Later works [gao2021clip2tv, camoe, clip2video, CLIP4Clip, mdmmt] use CLIP model as initialization for both text and vision encoders.

Pre-trained models, suitable for the text-to-video retrieval task can be divided into two classes. The first class is trained using crowd-labeled datasets such as Imagenet

[imagenet_cvpr09] or Kinetics [kay2017kinetics] datasets. Usually such models produce task-specific embeddings, which does not allow to achieve high quality in the text-to-video retrieval task. The second class is trained with a large amount of weakly-supervised data collected from the Internet. The most popular are CLIP, BERT and irCSN152, which are trained with the IG65M dataset (irCSN152-IG65M) [ghadiyaram2019largescale].

The analysis of pre-trained models in [mdmmt] and our experience show that models trained with a large amount of web-crawled data are able to produce embeddings for general application and allow to reach better quality in the text-to-video retrieval task.

Using CLIP as an initialization or a feature extractor significantly improves the results in the text-to-video retrieval task [gao2021clip2tv, camoe, clip2video, CLIP4Clip, mdmmt]. The CLIP model family has several different architectures. All of them have independent text encoder and visual encoder.

In this work we manage to use text-video, text-image and text-video weakly-supervised (HT100M) datasets together in the same training. In addition, we use the best pre-trained models. This allows us to achieve State-of-The-Art results with a single model on a number of benchmarks.

Our model follows the idea of MDMMT [gabeur2020multimodal, mdmmt]. However, we suggest an advanced multistage training approach, as well as perform analysis of existing prior knowledge and choose optimal backbones.

Pre-trained expert is a frozen pre-trained network that produces sequence of features for input video. In this work we use three experts, each for different modality. The first one is for image (RGB modality), processes video frames independently. The second one is for motion. It deals with several continuous frames together. The third one is for audio. See pseudocode example in Lst. 1.

The aggregator accepts embeddings made by experts and produce single embedding for the video. See pseudocode example in Lst. 2.

This way we make sure that different time lengths per expert embedding are processed correctly. The results in Tab. 1 support this novelty.

A list of datasets used in this work is provided in Tab. 2. Only training splits of listed datasets are used in training dataset. Note that we use both text-video and text-image datasets. In Sec. 4.4 we show results for video only datasets and image plus video datasets. Since each dataset has different amount of videos and captions, it is important to combine datasets properly [mdmmt].

The MDMMT-2 is trained with the bi-directional max-margin ranking loss [Karpathy2014DeepFE]:

where B,sij,m denote the batch size, the similarity score between the i-th query and the j-th video of the given batch, and some predefined margin correspondingly. We set m=0.05 and B=256 in all our experiments.

γ=0.95. In these experiments we freeze text backbone and train only aggregator model and text embedding projection part.

Results are reported as mean±std or just mean over 3 experiments.

In [mdmmt] it is shown that CLIP works as a strong visual feature extractor and outperforms other available models by large margin. We found out that CLIP text backbone also works better than other available text models, such as BERT [bert], which was originally used in [gabeur2020multimodal], or GPT [gpt].

Currently there are several publicly available CLIP models. In this section we compare their performance to make sure that we use the best possible combination. Results are presented in Tab. 3.

Both irCSN152-IG65M and CLIP take videos (images) of square shape as input. Therefore it is not possible to use information from the whole video directly. It may happen that some object or action is taking place in the corner (out of the center crop) of the video. So if we use center crop to compute embeddings, the information from the corners will be lost. There are several possible solutions to this problem:

For the mean technique we take three crops: left or bottom, center, right or top (depending on video orientation) and then average embeddings of these crops.

We want to emphasize that using mean during test improves video-retrieval performance even if other methods were used during train.

we show that proper combination of text-video and text-image datasets allows to improve video-retrieval performance. Hyperparameters are specified in Sec.

During stage S0 we use noisy HT100M dataset. Text backbone is frozen, only aggregator and text embedding projection part are trained.

During stage S1 we use crowd-labeled datasets 10V+3I . Same as in S0, text backbone is frozen, only aggregator and text embedding projection part are trained.

In this section we compare our solution with the prior art. Our best solution uses three modalities: CLIP ViT-L/14 (RGB modality), irCSN152-IG65M (motion modality), Slow-Fast trained on VGG-Sound (audio modality). Text backbone is used from CLIP ViT-L/14. To fuse modalities we use aggregator with 9 layers and 8 heads. Training procedure is described in Sec. 4.5. Results are shown in Tab. 11 - Tab. 16.

Center crop is used for visual features extraction during training and testing for all datasets except MSR-VTT (see Tab.

We performed a refined study of each conceptual part of transformer application for the text-to-video retrieval task. The analysis of the prior knowledge allows to choose optimal existing backbone experts. Combining different types of data sources allows to significantly increase the overall training data amount. Also we suggest a multi-stage training procedure without experts fine-tuning, which prevents their overfitting to a particular domain. Usage of the expanded data and optimal experts leads to a great increase in the generalization ability. It allows to obtain a model, which simultaneously performs well in multiple domains and benefits with the domains diversity increasing. We demonstrate an incredible novelty – possibility to obtain SOTA results in different domains by a same model, instead of preparing a domain-specific model for each. In particular, we obtained new SOTA results in MSR-VTT, LSMDC, MSVD, YouCook2 and TGIF with a single model trained only once.