Population-based metaheuristic algorithms have received significant attention in global optimisation. Human Mental Search (HMS) is a relatively recent population-based metaheuristic that has been shown to work well in comparison to other algorithms. However, HMS is time-consuming and suffers from relatively poor exploration. Having clustered the candidate solutions, HMS selects a winner cluster with the best mean objective function. This is not necessarily the best criterion to choose the winner group and limits the exploration ability of the algorithm. In this paper, we propose an improvement to the HMS algorithm in which the best bids from multiple clusters are used to benefit from enhanced exploration. We also use a one-step k-means algorithm in the clustering phase to improve the speed of the algorithm. Our experimental results show that MCS-HMS outperforms HMS as well as other population-based metaheuristic algorithms 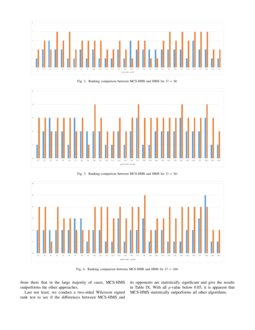 HMS-OS: Improving the Human Mental Search Optimisation Algorithm by Grouping in both Search and Objective Space

An Efficient Multi-core Implementation of the Jaya Optimisation Algorithm

Many optimisation problems can be formulated as searching for the best element or solution from all feasible solutions with respect to one or several criteria. While conventional optimisation algorithms like gradient-based methods are rooted in a solid mathematical formulation, they typically fail to provide satisfactory results and often stagnate in local optima [1],[2],[3].

Population-based metaheuristic algorithms are able to address this issue [4]

and can be divided into three general categories, namely evolutionary, swarm-based, and physics-based approaches. Evolutionary algorithms, such as the genetic algorithm (GA)

[6] and artificial bee colony (ABC) [7], imitate the social behaviour of animals, while physics-based algorithms, including the gravitational search algorithm (GSA) [8] and the mine blast algorithm (MBA) [9], are based on the laws of physics.

Human Mental Search (HMS) [10] is a relatively recent population-based metaheuristic algorithm that is based on the concept of exploring the search space of online auctions. Here, mental search, a main part of the algorithm, employs Levy flight to explore the vicinity of candidate solutions. HMS has been shown to solve effectively a wide range of optimisation problems, including unimodal, multi-modal, high-dimensional, rotated, shifted, and complex functions [10], as well as various machine vision applications including multi-level thresholding [11, 12], colour quantisation [13, 14], image segmentation [15], and image clustering [16].

HMS algorithm has three main operators, mental search to explore the vicinity of candidate solutions based on a Levy flight distribution, grouping to cluster the current population to find a promising region, and movement to move candidate solutions towards the promising region. Several improvements to HMS have been recently introduced, including leveraging a random clustering strategy [17], and grouping in both search and objective space [18].

In the grouping phase of HMS, a clustering algorithm is employed and the cluster with the best mean objective function value is selected as the winner cluster. However, this approach has a tendency of getting stuck in a local optimum. To address this issue, in this paper, we propose a novel HMS algorithm, MCS-HMS, that is based on multi-cluster selection. Here, the best candidate solutions in each cluster have a chance of being selected. We further employ a more efficient one-step k-means algorithm for clustering. Extensive experiments on various benchmark functions with different characteristics show that MCS-HMS outperforms HMS as well as other population-based metaheuristic algorithms.

The remainder of the paper is organised as follows. Section II describes the standard HMS algorithm. Our proposed MCS-HMS is then introduced in Section III, while experimental results are given in Section IV. Finally, Section V concludes the paper.

HMS is a metaheuristic algorithm inspired by the way the human mind searches. Each candidate solution, called a bid in HMS, is initially randomly generated. HMS then proceeds, iteratively, based on three main operators, mental search, grouping, and movement.

During mental search, a number of new bids are obtained as

where xi is a current bid, and

are two random numbers with normal distributions as

where Γ is a standard gamma function.

The grouping operator uses the k-means algorithm to cluster similar bids in the population. Then, for each cluster the mean objective function value is calculated and the cluster with the best value is selected as the winner cluster to represent a promising area in search space.

where W is the best solution in the promising area, C is a constant, r is a random number in [0;1], t indicates the current iteration, and subscript n indicates the n-th element of a bid.

One of the drawbacks of the standard HMS algorithm is that selecting the cluster with the best mean objective functions does not necessarily give the best choice for the promising area because the cluster might be placed far away from the global optimum. Therefore, choosing the best cluster and its best bid may limit diversification and may cause the next generations to be misled to a less successful area. Therefore, in this paper, we introduce a novel modification of HMS to tackle this issue and find a better promising area.

In the next step, we randomly select a bid from M as the target for the movement operator and thus the corresponding cluster as the promising area in search space. In contrast to standard HMS, this mechanism leads to improved exploration since the target is selected from the whole search space, and can also prevent early convergence.

In addition, we address the relative inefficiency of HMS due to its application of k-means in the grouping process. Inspired by [19], In MCS-HMS we replace k-means with a one-step k-means algorithm. That is only a single iteration of k-means is conducted, leading to quicker execution.

As dimensionality D of the search space we use 30, 50 and 100. The employed parameters of the various algorithms are given in Table I.

Since the employed methods are stochastic, we run all algorithms 25 times and report the mean over these runs in terms of the difference between the optimal value and that returned by an algorithm. The obtained results are given in Tables II, III, and IV for D=30, D=50 and D=100, respectively, and show impressively that MCS-HMS not only provides superior performance compared to standard HMS but that it also outperforms all the other algorithms.

Its superiority compared to standard HMS is further illustrated in Figs. 2, 3, and 4 which compared the rankings of HMS and MCS-HMS. From there, we can see that for the vast majority of cases, MCS-HMS is ranked top or second and that in particular, MCS-HMS gives the best result for 24, 25 and 27 functions for D=30, D=50 and D=100, respectively.

show, for each algorithm, the average rank, best rank, worst rank and standard deviation over the 30 benchmark functions for

As can be seen from there, MCS-HMS clearly yields the best performance for all dimensionalities, and by a significant margin. Table VIII further illustrates this by a pairwise comparison of MCS-HMS with all other methods. It is evident from there that in the large majority of cases, MCS-HMS outperforms the other approaches.

Last not least, we conduct a two-sided Wilcoxon signed rank test to see if the differences between MCS-HMS and its opponents are statistically significant and give the results in Table IX. With all p-value below 0.05, it is apparent that MCS-HMS statistically outperforms all other algorithms.

In this paper, we have introduced MCS-HMS, an enhanced version of the human mental search (HMS) optimisation algorithm. MCS-HMS employs a multi-cluster strategy in HMS’s grouping phase which allows for improved exploration ability, while also using a one-step k-means algorithm for clustering to speed up the algorithm’s execution. Based on a set of experiments carried out on the CEC 2017 test functions, we show that MCS-HMS not only significantly improves the standard HMS algorithm but that it also outperforms a number of other population-based metaheuristics.