We present MCQA, a learning-based algorithm for multimodal question answering. MCQA explicitly fuses and aligns the multimodal input (i.e. text, audio, and video), which forms the context for the query (question and answer). Our approach fuses and aligns the question and the answer within this context. Moreover, we use the notion of co-attention to perform cross-modal alignment and multimodal context-query alignment. Our context-query alignment module matches the relevant parts of the multimodal context and the query with each other and aligns them to improve the overall performance. We evaluate the performance of MCQA on Social-IQ, a benchmark dataset for multimodal question answering. We compare the performance of our algorithm with prior methods and observe an accuracy improvement of 4-7 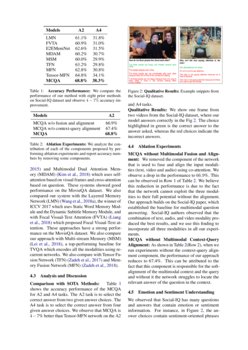 Recently, there has been interest in the community to shift to more challenging questions of the nature ‘why’ and ‘how’, rather than ‘what’ and ‘when’ to make the models more intelligent. These questions are harder as they require a sense of causal reasoning. One such recent benchmark in this context is the Social-IQ (Social Intelligence Queries) dataset Zadeh et al. (2019). This dataset contains a set of 7,500 questions, 52,500 answers for 1,250 social in-the-wild videos. This dataset comprises of a diverse set of videos collected from YouTube, is completely unconstrained and unscripted, and is regarded as a challenging dataset because of the gap between human performance (95.08%) and the prior methods on this dataset (64.82%). The average length of the answers of the Social-IQ dataset is longer than the previous datasets by 100%. This makes it challenging to develop accurate algorithms for such datasets.

Main Contributions: Social-IQ is a challenging dataset for video, text, audio input. We successfully demonstrate better results than SOTA systems on other datasets like MovieQA and TVQA when applied to Social-IQ. Given a input video and an input query (question and answer), we present a novel learning-based algorithm to predict if the answer is correct or not. Our main contributions include:

With multiple input modalities, it is important to consider how to fuse different modalities. Fusion methods like Tensor fusion network

have been used for multimodal sentiment analysis. These methods use tensor fusion and attention-based memory fusion, respectively.

Lei et al. (2018) use a context matching module and BiLSTM to model the inputs in a combined manner for multimodal question answering task.  Sun et al.

(2019) proposed VideoBERT model to learn the bidirectional joint distributions over text and video data. Our model takes in text, video, and audio features as the input however, VideoBERT only takes in video and text data. It is not evident if VideoBERT can be extended directly to handle audio inputs.

Multimodal Context-Query Alignment: Alignment has been studied extensively for reading comprehension and question answering tasks. For instance, Wang et al. (2018) use a hierarchical attention fusion network to model the query and the context. Xiong et al. (2016) use a co-attentive encoder that captures the interactions between the question and the document, and dynamic pointing decoder to answer the questions. Wang et al. (2017) propose a self-matching attention mechanism and use pointer networks.

In this section, we present the details of our learning-based algorithm(MCQA). In Section 3.1, we give an overview of the approach. This is followed by a discussion of co-attention in Section 3.2. We use this notion for Multimodal Fusion and Alignment and Multimodal Context-Query Alignment. We present these two alignments in Section 3.3 and 3.4, respectively.

We present MCQA for the task of multimodal question answering. We directly used the features publicly released by the Social-IQ authors. The input text, audio, and video features were generated using BERT embeddings, COVAREP features, and pretrained DenseNet161 network, respectively. The video frames were sampled at 30fps. We used the CMU-SDK library to align text, audio, and video modalities automatically. Given an input video, with three input modalities, text (xt), audio (xa), and video (xv) of feature length 768, 74, 2208, respectively, we perform Multimodal Fusion and Alignment to obtain the context for the input query. Next, we perform Multimodal Context-Query Alignment to obtain the predicted answer using ^h. Figure 1 highlights the overall network. We tried multiple approaches and different attention mechanisms. Ultimately, co-attention performed the best.

Our approach is motivated by Wang et al. (2018b), who use the notion of co-attention for the machine comprehension reading. The co-attention component calculates the shallow semantic similarity between the two inputs. Given two inputs ({utp}t=Tt=1,{utq}t=Tt=1), co-attention aligns them by constructing a soft-alignment matrix S. Here, up and uq can be the encoded outputs of any BiLSTM. Each (i,j) entry of the matrix S is the multiplication of the Relu Nair and Hinton (2010) activation for both the inputs.

We use the attention weights of the matrix S

to obtain the attended vectors

αi,: represents the attention weight on all relevant utq for uip. Similarly for uip, α:,j represents the attention weight on all relevant utq. The final attended representation upq is the concatenation of ^utp and ^utq which captures the most important parts of utp and utq with respect to each other. We use upq in our network to capture the soft-alignment between up and uq. As an example, given xt and xa as an input to the co-attention component, it will output uta as shown in Fig 1.

The multimodal input from the Social-IQ dataset consists of text (xt), audio (xa) and video (xv) component. These components are encoded using BiLSTMs to capture the contextual information and output ^xt, ^xa and ^xv. We utilized all the outputs of BiLSTM and not just the final vector representation. We use BiLSTMs of dimension 200, 100, 250 for text, audio, and video, respectively. Similarly, the question and the answer are encoded using BiLSTMs to output ^q and ^c.

We fuse the representation vu,q, vu,c, ^q, ^c and, ^u using a BiLSTM. In order to make the final prediction, we obtain ^h using a linear self-alignmentWang et al. (2018b) on h

and pass it through a feed-forward neural network.

wr is a trainable weight.

We train the MCQA with a batch size of 32 for 100 epochs. We use the Adam optimizer

with a learning rate of 0.001. All our results were generated on an NVIDIA GeForce GTX 1080 Ti GPU. We performed grid search over the hyperparameter space of number of epochs, learning rate, and dimensions of the BiLSTM.

MCQA without Multimodal Fusion and Alignment: We removed the component of the network that is used to fuse and align the input modalities (text, video and audio) using co-attention. We observe a drop in the performance to 66.9%. This can be observed in Row 1 of Table 2. We believe this reduction in performance is due to the fact that the network cannot exploit the three modalities to their full potential without the alignment. Our approach builds on the Social-IQ paper, which established the baseline for multimodal question answering. Social-IQ authors observed that the combination of text, audio, and video modality produced the best results, and we use this finding to incorporate all three modalities in all our experiments. MCQA without Multimodal Context-Query Alignment: As shown in Table 2(Row 2), when we run experiments without the context-query alignment component, the performance of our approach reduces to 67.4%. This can be attributed to the fact that this component is responsible for the soft-alignment of the multimodal context and the query and without it the network struggles to locate the relevant answer of the question in the context.

We present MCQA, a learning-based multimodal question answering task and evaluate our method on the Social-IQ, a benchmark dataset. We use co-attention for fusing and aligning the three modalities which serve as a context to the query. We also use co-attention to also perform a context-query alignment to enable our network to focus on the relevant parts of the video helpful for answering the query. We propose the use of a co-attention mechanism to handle combination of different modalities and question-answering alignment. It is a critical component of our model, as reflected by the drop in accuracy in the ablation experiments. While vanilla attention has been used for many NLP tasks, co-attention has not used for multimodal question answering; we clearly demonstrate its benefits. In practice, MCQA has certain limitations as it confuses and fails to predict the right answer multiple times. Social-IQ is a dataset containing videos of social situations and questions that require causal reasoning. We would like to explore better methods that can capture this reasoning. Our analysis in Section 4.5 suggests that the current models for question answering lack the understanding of emotions and sentiments and can be challenging problem in a question-answering setup. As part of future work, We would like to explicitly model this information using multimodal emotion recognition techniques Mittal et al. (2019); Kim et al. (2018); Majumder et al. (2018) to improve the performance of question answering systems.