We consider the Maximum-Profit Routing Problem (MPRP), a variant of pick-up routing problem introduced in <cit.>, in which the goal is to maximize total profit. The original MPRP restricts vehicles to visit a site at most once. In this paper, we consider extensions of MPRP, in which a site may be visited by a vehicle multiple times. Specifically, we consider two versions: one in which the quantity to be picked up at each site is constant in time (MPRP-M), and one with time-varying supplied quantities, which increase linearly in time (MPRP-VS). For each of these versions, we come up with a constant-factor polynomial-time approximaltion scheme. 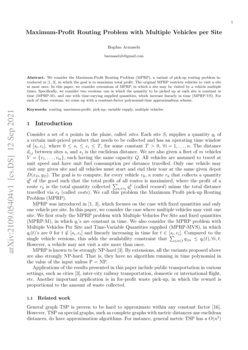 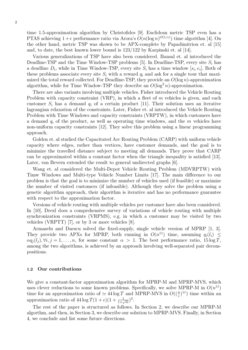 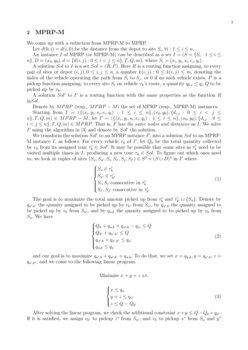 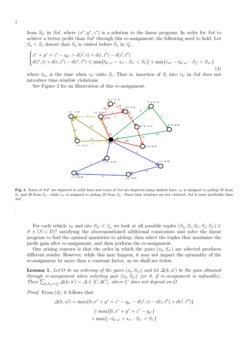 An APX for the Maximum-Profit Routing Problem with Variable Supply

In this paper, we study the Maximum-Profit Routing Problem with Variable...
Bogdan Armaselu, et al. ∙

The goal of this paper is to propose and test a new memetic algorithm fo...
Michał Karpiński, et al. ∙

A PTAS for Minimum Makespan Vehicle Routing in Trees

We consider a variant of the vehicle routing problem on trees in which t...
Amariah Becker, et al. ∙

Consider a set of n points in the plane, called sites. Each site Si supplies a quantity qi of a certain unit-priced product that needs to be collected and has an operating time window of [si,ei], where 0≤si≤ei≤T, for some constant T>0, ∀i=1,…,n. The distance di,j between sites si and sj is the euclidean distance. We are also given a fleet of m vehicles V={v1,…,vm}, each having the same capacity Q. All vehicles are assumed to travel at unit speed and have unit fuel consumption per distance travelled. Only one vehicle may visit any given site and all vehicles must start and end their tour at the same given depot D(xD,yD). The goal is to compute, for every vehicle vk, a route rk that collects a quantity qki of the good such that the total profit of all routes is maximized, where the profit of a route rk is the total quantity collected ∑si∈rkqki (called reward) minus the total distance travelled via rk (called costs). We call this problem the Maximum Profit pick-up Routing Problem (MPRP).

MPRP was introduced in [1, 3], which focuses on the case with fixed quantities and only one vehicle per site. In this paper, we consider the case where multiple vehicles may visit one site. We first study the MPRP problem with Multiple Vehicles Per Site and fixed quantities (MPRP-M), in which qi’s are constant in time. We also consider the MPRP problem with Multiple Vehicles Per Site and Time-Variable Quantities supplied (MPRP-MVS), in which qi(t)’s are 0 for t∉[si,ei] and linearly increasing in time for t∈[si,ei]. Compared to the single vehicle versions, this adds the availability constraint that ∑j,u≤tqiju≤qi(t),∀i,t. However, a vehicle may not visit a site more than once.

MPRP is known to be strongly NP-hard [3]. By extensions, all the variants proposed above are also strongly NP-hard. That is, they have no algorithm running in time polynomial in the value of the input unless P = NP.

Applications of the results presented in this paper include public transportation in various settings, such as cities [3], inter-city railway transportation, domestic or international flight, etc. Another important application is in for-profit waste pick-up, in which the reward is proportional to the amount of waste collected.

General graph TSP is proven to be hard to approximate within any constant factor [16]. However, TSP on special graphs, such as complete graphs with metric distances ane euclidean distances, do have approximation algorithms. For instance, general metric TSP has a O(n3) time 1.5-approximation algorithm by Christofides [9]. Euclidean metric TSP even has a PTAS achieving 1+ϵ performance ratio via Arora’s O(n(logn)O(1/ϵ)) time algorithm [4]. On the other hand, metric TSP was shown to be APX-complete by Papadimitriou et. al [15] and, to date, the best known lower bound is 123/122 by Karpinski et. al [14].

. They solve this problem using a linear programming approach.

Golden et. al studied the Capacitated Arc Routing Problem (CARP) with uniform vehicle capacity where edges, rather than vertices, have customer demands, and the goal is to minimize the travelled distance subject to meeting all demands. They prove that CARP can be approximated within a constant factor when the triangle inequality is satisfied [13]. Later, van Bevern extended the result to general undirected graphs [6].

. The main difference to our problem is that the goal is to minimize the number of vehicles used (if feasible) or maximize the number of visited customers (if infeasible). Although they solve the problem using a genetic algorithm approach, their algorithm is iterative and has no performance guarantee with respect to the approximation factor.

Armaselu and Daescu solved the fixed-supply, single vehicle version of MPRP [1, 3]. They provide two APXs for MPRP, both running in O(n11) time, assuming qi(li)≤αqj(lj),∀i,j=1,…,n, for some constant α>1. The best performance ratio, 15logT, among the two algorithms, is achieved by an approach involving well-separated pair decompositions.

We come up with a reduction from MPRP-M to MPRP.

A solution Sol to I is a set Sol=(R,P). Here R is a routing function assigning, to every pair of sites or depot (i,j),0≤i,j≤n, a number k(i,j):0≤k(i,j)≤m, denoting the index of the vehicle operating the path from Si to Sj, or 0 if no such vehicle exists. P is a pickup function assigning, to every site Si on vehicle vk’s route, a quantity qk,i≤qi,Q to be picked up by vk.

A solution Sol′ to I′ is a routing function with the same properties as the function R inSol.

We transform the solution Sol′ to an MPRP instance I′, into a solution Sol to an MPRP-M instance I, as follows. For every vehicle vk of I′, let Qk be the total quantity collected by vk from its assigned tour τ′k∈Sol′. It may be possible that some sites in τ′k need to be visited multiple times in I, producing a new tour τk∈Sol. To figure out which ones need to, we look at tuples of sites (Su,Su′,Si,Si′,Sj,Sj′)∈S2×(S∪D)4 in I′ where

After solving the linear program, we check the additional constraint x+y≤Q−Qk+qu′. If it is satisfied, we assign vk′ to pickup z∗ from Su′, and vk to pickup x∗ from Su and y∗ from Su′ in Sol, where (x∗,y∗,z∗) is a solution to the linear program. In order for Sol to achieve a better profit than Sol′ through this re-assignment, the following need to hold. Let Su<Sv denote that Su is visited before Sv in τ′k′.

where tk,i is the time when vk visits Si. That is, insertion of Si into τk′ in Sol does not introduce time window violations

See Figure 2 for an illustration of this re-assignment.

For each vehicle vk and site Su′∈τ′k, we look at all possible tuples (Su,Si,Si′,Sj,Sj′)∈S×(S∪D)4 satisfying the abovementioned additional constraints and solve the linear program to find the optimal quantities to pickup, then select the tuples that maximize the profit gain after re-assignment, and then perform the re-assignment.

One arising concern is that the order in which the pairs (vk,Su′) are selected produces different results. However, while this may happen, it may not impact the optmiality of the re-assignment by more than a constant factor, as we shall see below.

where Si<Sj indicates that Si is before Sj in τ′k′.

since otherwise one would be able to create an optimal metric-space MST-based tour of cost >2C, which is a contradiction of the result in [9].

for sufficiently large minqi2T, which is reasonable since T is constant, we get

Thus, we first run a MPRP solver to obtain a routing τ′ and then select the pairs (vk,Su′) in the order given by each τ′k for every k. For each of the O(mn) pairs, we inspect all possible O(n5) tuples in O(n) time per tuple, which is the time required to verify constraint 2. That is, our reduction is done in O(mn7) time.

As for the correctness of the reduction, suppose there exists a routing τ′′ for I′ yielding a profit increased by more than a factor of 4 compared to τ′. In order to do that, τ′′ must pickup a quantity q′′u′>4qu′ from some Su′. However, this implies that either Su′ is not re-assigned in τ and thus gives an increased profit for I′, or is re-assigned to one of Su,Si,Si′,Sj,Sj′ and thus gives an increased profit for one of these sites. Both options lead to a contradiction. Now suppose there exists a routing τ′′ for I yielding an increased profit compared to τ. In order for that to happen, either some site Su′ that was never added or involved in a re-assignment picks up a quantity q′′u′,k>qu′,k , implying an increased profit for q′′u′>4q′u′ for Su′ in τ′, or some site Su′ involved in a re-assignment with (Su,Si,Si′,Sj,Sj′) picks up a quantity q′′u′,k>4qu′,k , implying a quantity was picked up from some site (wlog assumed to be Su) in τ′′ which is more than 4 times the one picked from the samee site in τ′. In both cases, a contradiction follows due to Lemma 1. Hence, we have reduced MPRP-M to MPRP within an approximation ratio of 4 in O(mn7) time.

We have proved the following result.

MPRP-M can be solved in O(n11) time for an approximation ratio of ≃44logT.

In MPRP-MVS, quantities qi supplied at sites vary linearly as a function of time, i.e. qi(t)=qi(ei)t−siei−si.

We adapt the algorithm in [2] for solving MPRP-VS, to work in our case, by using a similar reduction as the one from MPRP-M to MPRP described in the previous section, to reduce MPRP-MVS to MPRP-VS.

Given an instance I=(S={Si:1≤i≤n},D=(x0,y0),d={d(i,j):0≤i<j≤n},T,Q,m) of MPRP-MVS, we apply the reduction in [2] to obtain an instance I′′∈MPRP−M, and then solve MPRP-M using the algorithm in Section 2. Again, this is not straightforward since the approach in [2] depends on single vehicle assignment which is not the case here. Thus, we need a more insightful construction of I′′ than directly applying the algorithm in [2].

Denote by τ′′ the routing obtained by running the MPRP-M algorithm on I′′. We now analyze the properties of τ′′ in order to put a bound on its performance ratio.

By running the 144logT-optimal MPRP-M algorithm in Section 2 on I′′, we get the following a profit at least 144logT(1+11+√m) as high as an optimal MPRP-MVS algorithm when run on I.

Note that the reduction described before Lemma 2 takes O(nϵ) time. Then, running MPRP-M on I′′ which has |S′′|=O(nϵ) sites, takes O((nϵ)11) time. Thus, we have proved the following result.

We solve the Multiple Vehicles per Site versions of the Maximum-Profit Routing Problem, specifically, the Fixed-Supply version and the Time-Variable Supply version.

We leave for future consideration probablisitc approaches for all versions of MPRP, e.g. algorithmic solutions whose output is, with high probability, within a certain bound of the optimum for the given instance. Proving negative results or lower bounds, e.g. inaproximability within a certain ratio, would also be of interest.